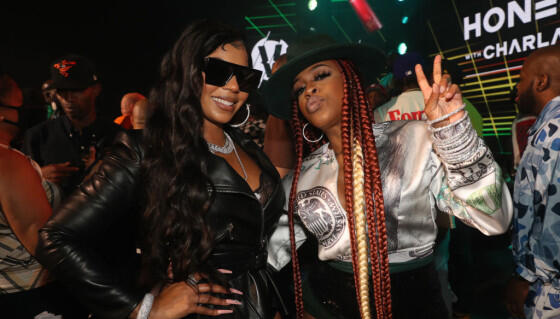 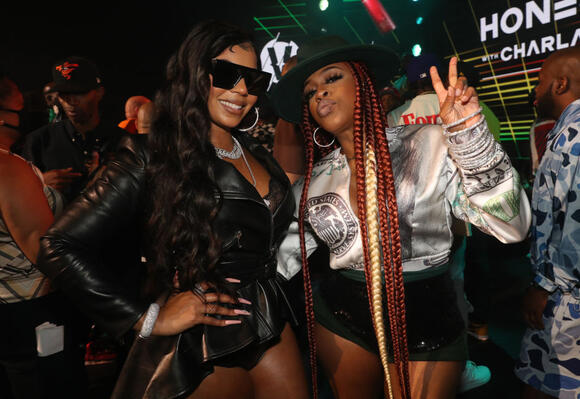 Fat Joseph issued Lil’ Mo and Vita a more sincere apology and Lil’ Mo accepted. But not before Remy Ma stepped in to basically tell Mo to stop dragging it. Mo eloquently replied,  “WHO IS YOU to tell ME how to FEEL. Mind ya business. Foh.” Touche.

I recently read a brilliant meme on Instagram that went something like this, “as soon as you big up a guy (she used more colorful language), they let you down.” No truer words have been written. After his wildly entertaining retelling of the Dipset/Lox Verzuz and him praising Ashanti at his birthday party , I was ready to commend Fat Joseph. He even gifted Ashanti and Remy Ma Birkin bags during his Verzuz battle against Ja Rule, last night. Then it was brought to my attention, during my bathroom break (which conveniently occurred every time Joe threw on some gangsta ish), he called Vita and Lil’ Mo, “dusty b*tches” that were pulled out the “crackhouse.” Then body shamed Vita for her athletic body before declaring, “my b*tches is rich.”

At one point, even Ja called out his opponent for calling women so many derogatory names during the lady-friendly event. “I’m shocked at you disrespecting the ladies like that,” he said checking the overzealous rapper. Twitter also took Joey Crack to task.

As expected, Fat Joseph stepped on his social media soapbox to apologize with an apology as sorry as his unnecessary comments. “ Shout out to the ladies very sorry if i disrespected i love vida and lil Moe I’m super sorry love my sisters,” he wrote. Womp womp. It was so easy for Joseph to uplift Ashanti and Remy Ma — two Black women who were crucial elements of his biggest songs; b ut didn’t hesitate to degrade and violate two Black women who he didn’t deem worthy because of their appearance and bank accounts. Chile please.

Aside from the trout mouth Terror Squad rapper getting himself cancelled on his biggest night, there were a bunch of other notable moments that deserve shine.

Ashanti may have faced off against Keyshia Cole in a Verzuz battle earlier this year, but sis is the real winner of the battle. Fat Joe brought out Remy Ma who also looked TF good. And there was a random, but enjoyable, appearance by Nelly that led to another viral Internet moment (we’ll get there).

Here’s the Verzuz moments everyone is still talking about:

Remy Ma came through looking snatched in a fierce bob and yellow two-piece crop bubble and shorts. Dubbing herself “The Godmother,” she gave fans a tease of new music during the Verzuz event while showing off her breath control during her iconic verses on Lean Back and Ante Up .

Nelly Wants That Old Thing Back 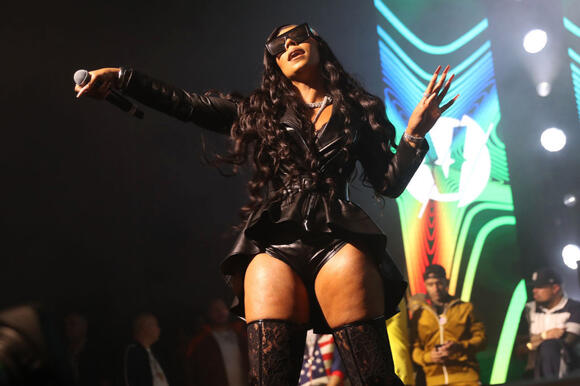 Fat Joe surprisingly brought out Nelly to perform their song Get It Poppin’, which automatically led fans to question if he and Ashanti crossed paths. The two dated for years but mysteriously broke up in 2013. Nelly appeared on stage right before Ashanti hit the MSG hardwood to give her boy Ja the ultimate assist. Ashanti looked snatched, per usual. Blinging. Hair Laid. Makeup on point. Giving the girls natural body ody ody. I hope I look as good as Ashanti did if I ever bump into my ex. Despite never addressing their breakup in detail, Nelly tip-toed over to Ashanti to steal a hug after being amped up by his boys backstage. 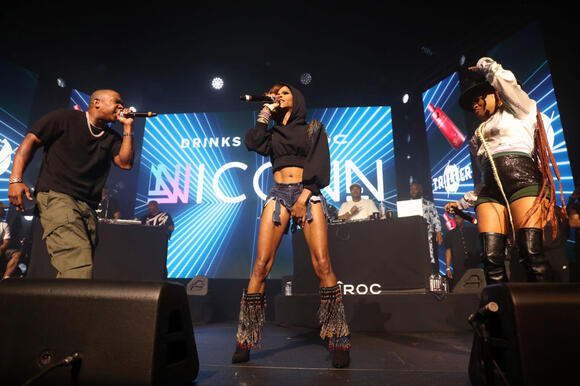 Was I the only fan who erupted from their seat when Ja Rule brought out Vita to rap her verse on Put It On Me?! Despite sloppy Joe’s comments about Ja needing to “feed” his former collaborators, Vita showed off her abs in a cropped hoodie.

He lost the battle and got his silly a** cancelled, but Fat Joe did one thing right last night. He gifted Remy Ma and Ashanti Birkin bags. The ladies opened their orange boxes on stage revealing the expensive bag.

Lil’ Mo gave fans what they came for when she stepped out to sing her verse on Put It On Me and I Cry. She looked good and sounding better.

Verzuz ended with Fat Joe and Ja Rule exchanging love for one another, hip-hop and the culture. That’s cool, but Fat Joseph has some explaining to do!

SWV Verzuz Xscape: A Glance At Their Fashion Evolution

Who won Verzuz between KRS-One and Big Daddy Kane? The best moments (video)

Two of the towering pillars that helped create rap and hip-hop into the unstoppable force that it is today were centerstage as Big Daddy Kane and KRS-One faced off in the latest Verzuz battle. The two 80’s era goliaths battled on Sunday night, Oct. 17, 2021, at the Barclays Center...
BROOKLYN, NY・9 DAYS AGO
hotnewhiphop.com

Fat Joe Roasted On Twitter For Comparing DaBaby To 2Pac

Rap City returned to BET earlier this month with the Rap City '21special, and one of its most talked-about moments so far has been Fat Joe's guest appearance on the show. During their interview, Big Tigger asked Fat Joe to play a game and name the 2021 version of some of Hip-Hop's past legends, including Jay-Z, Lauryn Hill, E-40, and more. However, Fat Joe's wildest response came when he was tasked with picking the "2Pac" of this generation. To many fans' surprise, Fat Joe chose DaBaby. Check the video out below.
CELEBRITIES・14 DAYS AGO
thebrag.com

DaBaby has responded to Fat Joe calling him the 2Pac of 2021 and unsurprisingly, he seems pretty stoked by the comparison. Earlier this year, Fat Joe discussed DaBaby and 2Pac in an interview with Rap City ’21. Now, DaBaby has reshared a clip from the interview along with the caption: “agreed… but they gone salt that down to Crack.”
CELEBRITIES・14 DAYS AGO
hotnewhiphop.com

50 Cent just couldn't help himself on Wednesday morning, firing off another shot at Lil' Kim. Over the years, the rapper has taken several playful shots at the iconic female emcee, and he continued a few hours ago by sharing a recent video of her dancing during a performance, comparing her moves to those of a troll.
CELEBRITIES・14 DAYS AGO

Fat Joe has made an interesting comparison between rapper DaBaby and the late Tupac Shakur claiming that the North Carolina rapper is the 2021 version of the iconic rhymer, and many have questions. DaBaby shared a clip from Fat Joe’s appearance on Rap City 2021 which aired before the 2021...
CELEBRITIES・14 DAYS AGO
Bossip

Lil Boosie Responds to Lil Nas X's father mentioning him after Boosie's homophobic tweet, Azealia Banks jumps in to gather everyone who can't worry about themselves.
CELEBRITIES・14 HOURS AGO
Soompi

SEVENTEEN’s Hip Hop Unit Talks About Fun Moments Together, Traits They’d Like To Steal From Each Other, And More

SEVENTEEN’s hip hop unit exudes charisma in their new pictorial for Esquire magazine!. Recently, SEVENTEEN returned with their ninth mini album “Attacca” with the title track “Rock with You.” In an interview with S.Coups, Wonwoo, Mingyu, and Vernon, the four members shared insight into their specific unit. Mingyu commented, “Until...
HIP HOP・1 DAY AGO
Daily Mail

Wendy Williams, 57, will not return to host new episodes of her eponymous show due to her worsening health as she is 'experiencing serious complications as a direct result of Graves’ Disease and her thyroid condition.'. A slate of guest hosts and panelists are being put together to helm The...
CELEBRITIES・15 DAYS AGO

Vernell Varnado is best known as the father of hugely popular American rapper and hip-hop artist Snoop Dogg. Following the recent passing of his mother, Beverly Tate, fans are curious to know more about Snoop Dogg’s loved ones. Here we get to know Varnado and his wider family. Explore the...
MUSIC・2 DAYS AGO
E! News

Mariah Carey apparently was not enjoying a sweet fantasy after Nick Cannon gave their twins a certain birthday gift this year. On Thursday, Oct. 7, a preview clip from his daytime talk show Nick Cannon showed the 41-year-old host of The Masked Singer revealing that ex-wife Mariah wasn't pleased when he went behind her back to buy cell phones for their twins Moroccan and Monroe to celebrate their 10th birthday in April. Nick and Mariah finalized their divorce in 2016, and he has since welcomed five children from other relationships.
CELEBRITIES・19 DAYS AGO
HipHopDX.com

Rick Ross has agreed to pay his ex-girlfriend Briana Singleton $11,000 per month in child support, according to TMZ. The judge in Rick Ross’ paternity case reportedly signed off on his agreement to send monthly child support payments for their three kids. The MMG rapper is also on board for additional annual payments of up to $3,000 per child, due to needing to pay for extracurricular expenses once the figure goes past $7,560.
CELEBRITIES・29 DAYS AGO
Insider

The baby is due in February 2022, according to Eve's Instagram, which also says her followers know how long she's "been waiting for this blessing."
BEAUTY & FASHION・11 DAYS AGO

Who was Maximillion Cooper's first wife before rapper Eve?

Lil Kim Claps Back At 50 Cent For Laughing At Unfavorable Meme Of Her -- 'Get Off My Pu**y Curtis'
CELEBRITIES・14 DAYS AGO
hotnewhiphop.com

It's not uncommon to see rappers turn to television and acting once their tenure in the rap game is complete. Ice-T, Ice Cube, and LL Cool J have all successfully established themselves as actors just as a new crop of MCs came into the game to shift the culture. 50 Cent, however, might not be leaping into acting as deeply as the aforementioned rappers-turned-actors but his efforts as a television executive have proven to be quite fruitful.
CELEBRITIES・14 DAYS AGO
Page Six

Alana Thomspon, also known as “Honey Boo Boo,” has finally gone Instagram-official with her boyfriend, Dralin Carswell, after six months of dating. “🎃🎃 spooky season 🎃🎃,” the reality star, 16, captioned a photo of herself and her 20-year-old beau at a pumpkin patch on Monday. The “Mama June: From Not...
CELEBRITIES・29 DAYS AGO
HipHopWired

Emani 22 of Lancaster reportedly died this past Monday (October 11), and the details are largely being kept from the public at the moment.
LANCASTER, NY・12 DAYS AGO
Complex

Some gifts are worth every penny. Drake’s close friend Future the Prince gifted Drizzy the Rolls-Royce Phantom that he used to rent and ride around in to, as he put it, “keep up appearances” back in the day. “Back in 2007 we used to finesse this Rolls-Royce Phantom rental to...
CELEBRITIES・3 DAYS AGO
chatsports.com

Katie Price revealed her 2009 split from ex husband Peter Andre had a big impact on her son Harvey, 19. The former glamour model, 43, opened up in her emotional memoir that the teenager- who has Prader-Willi Syndrome, autism and blindness- refuses to meet with Peter. She admitted in her...
CELEBRITIES・2 DAYS AGO