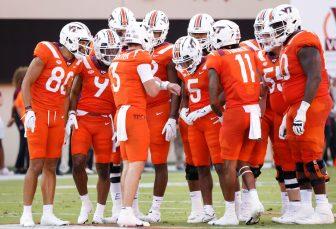 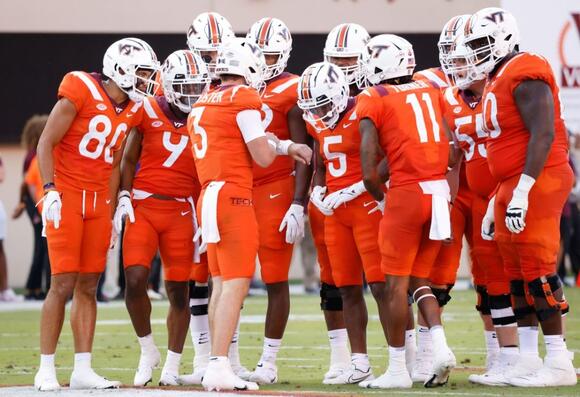 It has been much longer since West Virginia lost to a nonconference opponent at home.

Hitting the road for the first time in 2021, the No. 15 Hokies look to remain undefeated on Saturday against the Mountaineers at Morgantown, W.V.

West Virginia (1-1) has won six consecutive games at home and is 18-0 against nonconference opponents at Morgantown since a 47-21 loss to then-No. 2 LSU on Sept. 24, 2011. That was also the last time the Mountaineers hosted a ranked nonconference team. 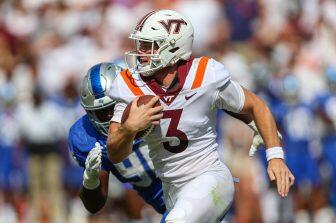 “We’re excited for it, we’re excited for the opportunity, the challenge to this team on the road in a hostile environment — and see how we can perform. This is part of why you play the game.”

The Hokies’ early success has been based on a solid defensive effort in which they’ve yielded 703 total yards, recorded nine sacks and four interceptions through two games.

Offensively, Virginia Tech quarterback Braxton Burmeister has thrown for 311 yards with two touchdowns and an interception. He also leads the team with 94 rushing yards on 17 carries.

Virginia Tech did endure a blow after talented tight end James Mitchell (five receptions, 42 yards, one touchdown in 2021) went down with a season-ending knee injury.

The Hokies have won three in a row over West Virginia, but this is their first meeting since 2017.

The Mountaineers opened their season with a 30-24 loss at Maryland, where they rushed for just 48 yards and committed four turnovers. West Virginia, however, rebounded with an easy 66-0 rout of Long Island University last weekend.

“We sit here at 1-1, and now our chance at redemption, a chance to really make a mark is on Saturday,” West Virginia coach Neal Brown said.

“It’s going to be one of the biggest home games we’ve had here in my tenure. … (I look) forward to the opportunity.”

In his fifth collegiate season, Doege has thrown for 536 of his 7,982 career yards in 2021. He threw three of his four touchdowns this season against LIU. Brown, with 1,927 rushing yards over 34 collegiate contests, saw limited work against LIU after running for 73 yards and two touchdowns on 17 carries versus Maryland.

Brown’s five touchdowns (four rushing, one receiving) are tied for second in the country to enter the week.

Things aren’t looking very good for Ed Orgeron and the LSU Tigers this season. LSU, which won the national championship in 2019, had a disappointing 2020 season. The Tigers failed to follow up their national title season with another contending season in ’20. Unfortunately for the Baton Rouge program, the same is true in 2021.
COLLEGE SPORTS・9 DAYS AGO
FanSided

If the LSU football program needs to replace Ed Orgeron, look for them to swing for the fences. Not even a full two years removed from a perfect national title-winning season, and LSU football head coach Ed Orgeron is already on the hot seat. The Bayou Bengals lost their first...
AUBURN, AL・14 DAYS AGO
ClutchPoints

After struggling mightily to get the offense going against Texas in Week 6, Oklahoma Sooners head coach Lincoln Riley benched starting quarterback Spencer Rattler in favor of Caleb Williams. Williams was brilliant and Rattler has sputtered at times throughout the year. Williams’ performance for the Sooners against the Longhorns has...
OKLAHOMA STATE・6 DAYS AGO
Larry Brown Sports

Ed Orgeron will not return as the head coach at LSU next season, which is shocking considering he led the team to a national title less than two years ago. It’s also surprising to read the claim that Orgeron has lost the locker room. Shortly after it was reported that...
COLLEGE SPORTS・2 DAYS AGO

Report: Orgeron's 'Girlfriends' Would Show Up at Practice and 'Interfere', Even Participate in Drills Along With Their Kids

WBRZ sports anchor Matt Trent reported yesterday that Orgeron had "girlfriends" that would show up to practice. Sometimes, the kids of those girlfriends would interfere with practice and actually take part in team drills.
FOOTBALL・1 DAY AGO
Fox News

Arch Manning is going to be in the national spotlight for years to come and it goes beyond his famous last name as he’s proven to be one of the top high school quarterbacks in the nation. Beyond reading defenses, Manning’s biggest selection is going to be where he decides...
FOOTBALL・23 DAYS AGO
HBCU Gameday

LSU football head coach Ed Orgeron’s next coaching job is more obvious than you would think. With Ed Orgeron parting ways with the LSU football program at the end of the season, everybody and their brother is curious as to where he could end up. Orgeron is not even two...
MIAMI, FL・1 DAY AGO

Garic: Ed Orgeron is out at LSU for one big reason, he just couldn't say no

Head coach Ed Orgeron just couldn't say no. LSU Athletic Director Scott Woodward arrived at the point he and many Tigers fans already knew was coming. This football season is going to end in disaster. Sure, the Tigers just pulled off a big upset of Florida, little did we know it was in spite of Coach O not because of Coach O. That's wild to think about.
COLLEGE SPORTS・1 DAY AGO
The Spun

We’re only through the first month of the 2021 college football season, but ESPN analyst Paul Finebaum is already writing off the Clemson Tigers. During this Wednesday’s edition of Get Up, Finebaum made an interesting comment about Clemson’s outlook moving forward. Not only does he see the Tigers struggling the rest of this season, he thinks their dynasty is officially over.
COLLEGE SPORTS・20 DAYS AGO
The Spun

Saturday night could’ve been Nick Rolovich’s final game as the Washington State head football coach. Washington State topped Stanford to improve to 4-3 on the season on Saturday. While the program appears to be building in the right direction, Rolovich might not be around for the future. The state of...
COLLEGE SPORTS・2 DAYS AGO
The Spun

When you help your team pull off an upset of the No. 2 team in the country on the road, you deserve some postgame refreshment. Just ask Purdue’s Greg Long. Long, a fifth-year offensive lineman, helped lock down the trenches in the Boilermakers‘ 24-7 upset of Iowa this afternoon. After the win, the 2020 Honorable Mention All-Big Ten selection helped himself to an ice cold beer on the field.
IOWA CITY, IA・3 DAYS AGO

JF is not going to LSU

Last night was not one of the finest moments in Herm Edwards‘ coaching career. Edwards’ Arizona State team blew a 21-7 halftime lead and lost 35-21 to Utah. The Sun Devils came into the game ranked 18th, but after falling to 5-2, will probably drop out of the polls. Meanwhile, there are fans and analysts wondering if Edwards is capable of leading the program out of mediocrity.
COLLEGE SPORTS・2 DAYS AGO
FanSided

Backup quarterback was a major talking point entering the season for the Indianapolis Colts, as Carson Wentz was not 100-percent to start the season, so there was some thought that Jacob Eason might be in the lineup. Eason and rookie Sam Ehlinger were the primary backup options for the Colts...
NFL・10 HOURS AGO

Most LSU fans will likely accept that it was time for the school to move on from coach Ed Orgeron. Joe Burrow, however, is not one of them. Burrow was clearly disappointed with the announcement that Orgeron and LSU will part ways at the end of the season. Burrow and Orgeron won a championship together two years ago. Orgeron had entrusted the team to Burrow, then a transfer from Ohio State, and Burrow went on to win the Heisman Trophy in 2019.
COLLEGE SPORTS・2 DAYS AGO
Sportsnaut

The college football rankings are the bottom-line determination of a team’s fate. Beginning with the Associated Press and coaches polls, and followed by the College
ALABAMA STATE・2 DAYS AGO
On3.com

One of the top receivers left on the board for Georgia Luther Burden has made his college decision. The East St. Louis, Illinois product ranks as the number two receiver in the class by 247Sports' player composite rankings, making Burden the sixth-best player overall in the country. The five-star came...
COLLEGE SPORTS・7 HOURS AGO