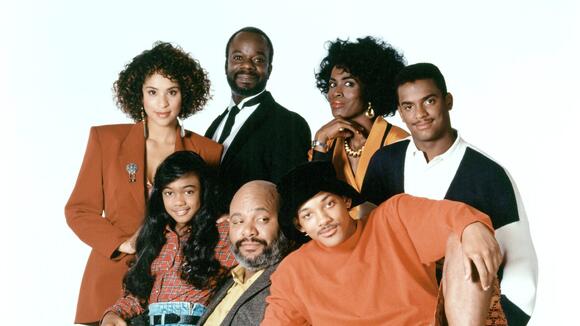 The Banks family gets new faces as the cast for Bel-Air, the modern-day Fresh Prince Of Bel-Air spinoff is announced. Peacock revealed the full recurring talent for the anticipated drama series, which recently began production.

As pictured in the video above, back in August, Will Smith himself revealed to actor Jabari Banks that his life is about to be turned upside down as he earned the leading role.

According to a press release, despite being a reboot of the popular throwback comedy show, Bel-Air “i s a serialized one-hour dramatic analogue of the 90’s sitcom ‘The Fresh Prince of Bel-Air’ that leans into the original premise.” It continues to describe how the show will detail Will’s complicated journey from West Philadelphia to his new lifestyle in Bel-Air with a reimagined vision.

“Bel-Air will dive deeper into the inherent conflicts, emotions, and biases that were impossible to fully explore in a 30-minute sitcom format, while still delivering swagger and nods to the original show,” stated the press release. 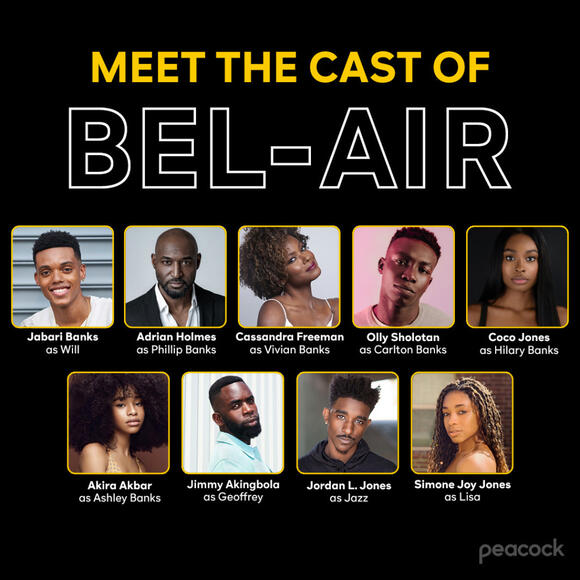 Bel-Air is based on Morgan Cooper’s viral video that offered a new portrayal of the classic series. Cooper wrote and directed the four-minute trailer, which debuted on social media in March 2019 and subsequently went viral. As the clip made rounds on the internet it caught the attention of Smith, who called the video and idea brilliant.

The Men In Black franchise star initially announced an official reboot based on the fan-created trailer back in September 2020, a year-and-a-half after the concept went viral. Cooper will serve as a director, co-writer, and executive producer on the new series.

Watch Cooper’s original video below to see what to expect from the new series.

The many women in Hip-Hop who have helped shape the culture into the worldwide phenomenon it is today are being celebrated in an ABC News Special titled Real Queens of Hip-Hop: The Women Who Changed The Game, set to air next Monday (Oct. 18) at 10 p.m ET on ABC. Narrated by Salt of legendary rap group Salt-N-Pepa, the one-hour program will include an original spoken word performance by rap icon MC Lyte and be scored by hit-making producer WondaGurl. Documenting the role of women in the birth and growth of Hip-Hop, Real Queens of Hip-Hop will include interviews with pioneers...
TV & VIDEOS・6 DAYS AGO
Vibe

Lena Waithe continues to expand her creative media territory. The 37-year-old screenwriter and producer has signed a multi-project podcast deal with Audible, reports by Variety. The partnership is sealed between the audio service and Waithe’s Hillman Grad Productions, co-founded with Rishi Rajani. Hillman Grad Productions’ current projects include Showtime’s The Chi, BET’s Twenties, and horror series, Them, on Amazon Studios. “Lena is a supremely gifted storyteller with a proven ability to capture the human experience in all its complexity through her work,” said Zola Mashariki, head of Audible Studios. “Along with her company, Hillman Grad Productions, she elevates diverse voices and creates...
CELEBRITIES・10 DAYS AGO
Vibe

AZ On ‘Doe Or Die II,’ Working With Idris Elba, And Being All In For A Reunion With The Firm

In an age where the attention span of rap fans is fleeting, it’s easy for artists to get lost in the wash. When you’re out of sight and out of mind in an attention-seeking world, it becomes even more challenging to capture the ears, minds, and hearts of fans and consumers. However, there are always exceptions to the rule, especially in the case of veteran rapper Anthony “AZ” Cruz. For upwards of a decade, the Brooklyn-bred artist has managed to sustain the buzz and mystique surrounding the long-awaited sequel to his acclaimed 1995 solo debut Doe or Die. After dropping the...
BEAUTY & FASHION・7 DAYS AGO
ComicBook

AMC's television adaptation of Anne Rice's Interview With the Vampire has found its Claudia. Variety reports that Bailey Bass has been cast in the role, rounding out the main three characters in the story. Jacob Anderson and Sam Reid were previously announced in the roles of Louis and Lestat respectively. Bass will be the second actor to play Claudia in live-action with Kirsten Dunst having portrayed her in the 1994 Interview With the Vampire film. Bass has appeared as a guest star on NBC's Law & Order: SVU and will play Tsireya in the upcoming Avatar sequels.
TV SERIES・13 DAYS AGO

We couldn’t be more grateful to everyone who worked so hard on this show, especially our wildly talented director Molly Manners.”. Made by award-winning Tiger Aspect (part of Banijay UK) the series has just finished shooting on location in Watford. Also released today is a first-look image and the supporting cast has been revealed from the forthcoming new series.
TV SERIES・12 DAYS AGO
Mic

Hits Different is a new series that takes a second look at a TV show, song, album, episode, movie, scene, or clip from the past that, in our current context, just hits different. What was the world like when you first considered this piece of culture, and what’s changed? Does it hold up as timeless, or is it better left to the past? Pitch us at features@mic.com.
TV & VIDEOS・5 DAYS AGO
PopSugar

Over the last four seasons of On My Block, Abuelita (played by Peggy Blow) became one of the more prominent characters on the beloved Netflix show. Though she's most notably known for her role in the coming-of-age series, you probably recognize Blow from one of our favorite classic '90s sitcoms. Way before she signed on for the hit Netflix series, Blow was Marge Smallwood on The Fresh Prince of Bel-Air, aka the radical activist who was an old friend of Philip and Vivian Banks.
TV & VIDEOS・4 DAYS AGO
Variety

The Amazon Original YA horror series “I Know What You Did Last Summer” premiered on Wednesday night with an outdoor screening at The Roosevelt Hotel in Los Angeles. Based on the iconic 1997 slasher movie which was adapted from Lois Duncan’s 1973 novel and starred Jennifer Love Hewitt, Sarah Michelle Gellar, Freddie Prinze Jr. and Ryan Phillippe, the eight-episode series maintains the same initial set-up as its source material. The series follows a group of friends who are bound together after they cover up a tragic accident that occurred on the night of their high school graduation. One year later, they...
LOS ANGELES, CA・2 DAYS AGO

EXCLUSIVE: Meena Rayann (Game of Thrones), Jack Mullarkey (Vikings: Valhalla) and Richard Clothier (Fantastic Beasts and Where To Find Them) are set for key recurring roles in Netflix drama series Warrior Nun. Inspired by the manga novels, Warrior Nun  hails from creator/executive producer Simon Barry (Ghost Wars, Continuum), who also serves as showrunner. It revolves around a 19-year-old woman (Alba Baptista) who wakes up in a morgue with a new lease on life and a divine artifact embedded in her back. She discovers she now is part of an ancient order that has been tasked with fighting demons on Earth, and...
TV SERIES・18 HOURS AGO
Register Citizen

Showtime announced that Blair Underwood and Lola Kirk have been cast in the upcoming drama series “Three Women” based on Lisa Taddeo’s book of the same name. As a series regular, Underwood will play Richard, a popular chef who is blindsided when his wife Sloane (DeWanda Wise) enters a sexual relationship with another man. Lola Kirke plays the recurring guest role of Jenny, a free spirit who may be the only woman Sloane has ever been close to.
TV SERIES・15 HOURS AGO
Variety

The “LA Law” sequel series pilot at ABC has cast Corbin Bernsen to reprise his role from the original series. Bernsen joins previously announced returning cast member Blair Underwood. The updated logline for the project describes it as a re-envisioning of the original featuring familiar characters working alongside new ones on the most hot button issues of the day. Bernsen returns in the role of Arnold Becker. A former lothario, Becker hasn’t changed since the 1980s but the world has. Now in his 60s, he struggles with a rapidly shifting sexual and political landscape. “I’ve often thought about revisiting ‘LA Law’ and Arnie...
TV SERIES・15 HOURS AGO
asapland.com

NCIS is known for its Naval Criminal Investigation Service. It is the drama TV Series. This series is based on Law and Order: Special Victims Unit. Recently, producers have announced the Season 18 of NCIS. 17 The seasons of this show is already popular and hit. It is an obvious thing that the show is running for 17 Seasons and it has not separate fan base.
TV SERIES・5 DAYS AGO

John Cena strips once again to his skivvies as a homicidally misguided costume vigilante in the first trailer for the HBO Max series “Peacemaker,” which debuted on Saturday as part of the virtual fan event DC Fandome. “Peacemaker,” the spin-off series from the August feature film “The Suicide Squad,” will premiere on the streaming service on Jan. 13. It was created and written by the film’s director, James Gunn. The show follows Cena’s Christopher Smith after the events of “The Suicide Squad,” in which Smith, aka Peacemaker, was nearly killed after betraying his team for what he believed to be the greater...
TV & VIDEOS・2 DAYS AGO
GamesRadar+

Naomi Chases a Superman Scoop, Gets More Than She Bargained for in Teaser for New CW Superhero Series

It’s not easy being a nebbish nerd girl when talks of Superman are in the air, as shown in a new clip for The CW’s midseason superhero drama Naomi. Warner Bros. TV unveiled the first look on Saturday at its virtual DC FanDome event. Written and exec-produced by Ava DuVernay (When They See Us) and Jill Blankenship (Arrow), the DC comic adaptation stars The Equalizer‘s Kaci Walfall in the titular role. Naomi centers on a cool, confident Black teenager with braids as she chases her hidden and unexpected destiny. As Naomi “journeys to the heights of the multiverse” in search of the...
TV SERIES・2 DAYS AGO
Insider

'You' producer reveals they had to scrap a 'major storyline' with Mr. Mooney for season 3 because actor Mark Blum died from COVID-19 complications

Executive producer Sera Gamble said the Netflix series was going to have another plot but they didn't get to finish it due to the actor's death.
TV SERIES・1 DAY AGO