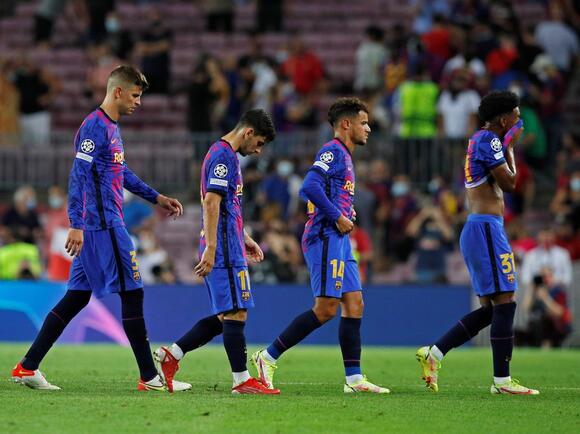 FC Barcelona's post-Lionel Messi plight continued on Tuesday night as it was swept aside by Bayern Munich in its Champions League opener.

Goals from Thomas Müller and Robert Lewandowski sank Ronald Koeman's side to a 3-0 defeat at the Camp Nou.

Without Messi - who joined Paris Saint Germain in the summer - at the helm, Barcelona failed to register a single shot on target for the first in its Champions League history.

"The result is rough and playing at home, it's a bad result, we can't lie to ourselves," defender Gerard Pique said after the defeat."

Though the result was an improvement on the 8-2 defeat to Bayern last year that kick started the club's descent into chaos, it still was a far cry from the Barcelona of old.

Muller opened the scoring for the dominant visitors in the 34th minute when his strike took a wicked deflection off a stationary Eric Garcia, who had failed to close the German down, and into Marc-Andre ter Stegen's goal.

After the break, Ter Stegen foiled Bayern on mutiple occasions, but the Bundesliga champion eventually found a way through once again through the irrepressible Robert Lewandowski, who found the net for the 18th match running.

The Polish striker then struck again late on, prodding home from close range after Serge Gnabry's shot had come back off the post, to wrap up the scoring.

The defeat for Barcelona means it has now lost three consecutive home games in European soccer competitions for the first time ever.

In the 13 months since Barcelona's 8-2 defeat to Bayern and Tuesday's 3-0 loss - Barcelona has sank into a state of disrepair.

Messi asked to leave the club following last year's defeat, but eventually backed down and agreed to stay in order to avoid a legal battle.

Former president Josep Maria Bartomeu stepped down in October amid the fallout, and was arrested shortly after for allegedly using the club's money to run a "smear campaign" against Messi and other players.

A financial report released in January then revealed Barcelona to be in $1.4 billion of debt.

Though Bartomeu's replacement, Joan Laporta, had convinced Messi to sign a new contract, the club's disastrous financial situation meant it was unable to extend the Argentine's stay at the Camp Nou, and he became a free agent before joining PSG.

It also meant a number of the club's longest serving players, including Pique and Sergio Busquets, were forced to take pay cuts so that Barcelona could register players it had signed in the summer.

After its most recent defeat to Bayern, Laporta released a video pleading with the club's supporters to "trust and support" the team.

"I am as disappointed as upset as all of you are," he said. "I need to tell you what is happening is one of the situations we expected.

"And I asked you for your patience and that you continue supporting our team. I also ask for your trust in us, [and] the people who are managing the club.

"We need your trust and time, and do not doubt that we will solve this situation."

Real Madrid are reportedly waiting on Chelsea to make a decision over Antonio Rudiger's future before deciding whether to make a move for the defender on a free transfer. The 28-year-old is out of contract at the end of the season and will be allowed to talk to foreign sides over a potential move for next season if he does not renew with Chelsea by January.
PREMIER LEAGUE・13 DAYS AGO
Insider

PSG, Bayern Munich, Real Madrid, and Barcelona all lost in a huge weekend of upsets in European soccer

The last time all four teams lost on the same weekend was 18 years ago in April 2003.
SPORTS・14 DAYS AGO
FanSided

Bayern Munich was defeated for the first time this season in the Bundesliga. Visiting Eintracht Frankfurt stunned the hosts to record their first league win of the season. Despite taking an early lead from a Leon Goretzka goal, Bayern was unable to hold off Frankfurt as they would score two unanswered goals to take all three points. A second-half strike from Filip Kostic proved to be the difference. Here are five key stats from Bayern’s 2-1 loss.
UEFA・14 DAYS AGO
World Soccer Talk

Berlin (AFP) – Thomas Mueller admits Bayern Munich’s first home Bundesliga defeat for two years was a wake-up call after the Bavarian giants had won their nine previous games this season. “We are of course disappointed. Or angry, annoyed, I don’t know which best describes it,” said Mueller in the...
SOCCER・14 DAYS AGO

Real Madrid suffered another surprise defeat as the LaLiga leaders went down 2-1 at Espanyol. Five days on from their shock 2-1 home loss to Sheriff Tiraspol in the Champions League, Carlo Ancelotti’s men fell behind in the 17th minute at RCDE Stadium when Raul De Tomas netted from close range.
UEFA・14 DAYS AGO
Absolute Chelsea

Chelsea striker Timo Werner has revealed the reason why he has recently changed agents amid interest from Bayern Munich. The forward was back in the Chelsea line-up against Southampton and bagged a goal upon his return. Speaking to Express.de via Sport Witness, Werner discussed his future. Werner recently changed agents...
PREMIER LEAGUE・10 DAYS AGO
IBTimes

Barcelona Set To Complete Transfer Of Another 'New Lionel Messi'

Barcelona is on course to adding another Lionel Messi-like player into its squad. On September 23, Barcelona B confirmed the signing of Turkish attacker Emre Demir from Kayserispor. The said “agreement” revealed that Demir will be penning a €2 million ($2.3 million) deal that includes variables and a whopping €400...
SOCCER・11 DAYS AGO
SPORTbible

In a shocking revelation, Barcelona genuinely had hoped Lionel Messi would play for them for FREE and turn down the transfer to Paris Saint-Germain. Messi was forced to leave Barca in the summer due to the club's absolutely dire financial situation. He signed for PSG, penning a mega-lucrative contract -...
UEFA・10 DAYS AGO

This weekend has been one of a roller coaster ride for the footballing fans as we saw some top tier big dogs faulter to their first loss in their respective leagues. We are already into the second month this season and we have seen mind boggling matches in each and every top European leagues.
UEFA・13 DAYS AGO
FanSided

The international break is often monotonous since games are often friendlies or qualifiers. However, the current international break has a much more competitive edge due to the scheduling of the semi-finals and final of the UEFA Nations League. The French contingent from Bayern Munich will be contesting in the final after 3-2 win against Belgium on Thursday.
UEFA・10 DAYS AGO
FanSided

Bayern Munich Frauen continued their winning ways on Saturday with a 3-1 win over visiting Hoffenheim. The home side was able to bounce back from a disappointing scoreless draw against Benfica in mid-week UEFA Champions League action. This victory was Bayern‘s fifth of the current Frauen-Bundesliga campaign as they remain undefeated in the German top-flight.
UEFA・7 DAYS AGO
FanSided

Despite the defeat against Eintracht Frankfurt on Sunday, Bayern Munich has made a tremendous start to the campaign. The German Champions have suffered only one defeat in two months with the perfect start to the Cup competitions. Bayern currently sits at the top of the Bundesliga and Champions League Group table. The Bavarian club has also qualified for the second round of DFB Pokal.
SOCCER・11 DAYS AGO

Bayern Munich: Roca and Nianzou should look for loan moves

The two months of the new campaign have given an overview regarding players that will be crucial for Julian Nagelsmann at Bayern Munich. The German manager has not heavily rotated between Champions League and Bundesliga games, which has led to very less playing time for fringe players in the squad.
UEFA・8 DAYS AGO
FanSided

The second UEFA Nations League trophy was clinched by France on Sunday. The defending World Champions managed to come away with a narrow 2-1 win against Spain in an entertaining game. Two of the three Bayern Munich players in the French squad did feature in the final against Spain in Milan on Sunday.
UEFA・7 DAYS AGO
FanSided

The last couple of seasons have been productive for Bayern Munich in terms of integrating young players from the reserves in the first team. The German Champions did struggle to make players from youth teams integral members of the first-team squad. Jamal Musiala enjoyed a breakthrough campaign with Rekordmeister last...
SOCCER・6 DAYS AGO
ESPN

The summer transfer window was unlike any other; see all the major deals and check out how we graded the biggest signings. And just because the window is shut until January, that doesn't mean the rumours won't keep coming. Here is the latest gossip and speculation. TOP STORY: Bayern eye...
MLS・7 DAYS AGO
90min.com

Bayern Munich striker Robert Lewandowski has admitted he would take great pride from winning the 2021 Ballon d'Or following a stellar two years that have consisted of relentless goalscoring. The 33-year-old has operated at the highest level of the game for well over a decade, tearing Bundesliga and Champions League...
SOCCER・6 DAYS AGO
Yardbarker

Aurelien Tchouameni is a target of Juventus, but several European clubs also want to sign him and they will ensure that he doesn’t go to Turin. The latest to be linked with a move for him is Bayern Munich, with the Germans looking for a replacement for Corentin Tolisso. Tolisso...
SOCCER・6 DAYS AGO
BBC

Bayern Munich's 18-year-old midfielder Jamal Musiala shows MOTDx around the German giants' training ground and charts his career path, from being talent spotted in Southampton, to playing for Germany at Euro 2020. Watch more with Jamal Musiala on MOTDx, streaming on BBC iPlayer from 18:30 BST on Thursdayy, 14 October.
SOCCER・4 DAYS AGO
Tribal Football

Bayern Munich striker Robert Lewandowski has paid tribute to Manchester City boss Pep Guardiola. Lewandowski worked with Guardiola at Bayern. He told Marca: “Guardiola taught me to look at football differently. To understand movement, tactics, how to use it in the game. After working with him, I think differently in football, because I see football from the side, from a different angle.
PREMIER LEAGUE・6 DAYS AGO