Evander Holyfield’s next fight: Everything you need to know

By Jason Burgos
Sportsnaut
4 days ago 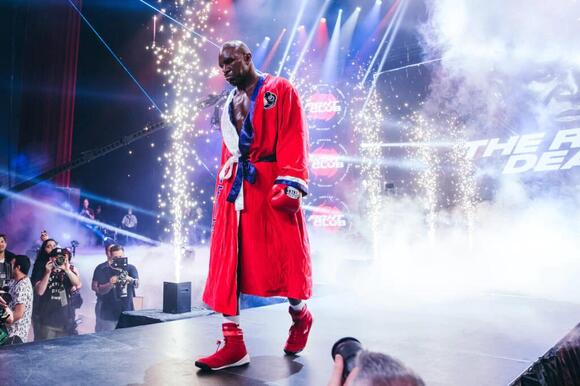 Evander Holyfield is one of the greatest heavyweights to ever compete in professional boxing. Now, after ending his 10-year retirement and returning to the sport on Sept. 11, fans are wondering when is Evander Holyfield’s next fight.

Who will Evander Holyfield’s next fight be against?

Despite falling short in his comeback bout, Holyfield’s fans will surely crave “one-more-fight” after his matchup against mixed martial arts star Vitor Belfort ended so quickly. When he does return, the fights that are the most logical options would be James Toney , Lennox Lewis , and UFC veteran Frank Mir .

After 10 years away from the squared circle, “Real Deal” made his return to the sport that made him a legend at Triller Fight Clubs: Legends II, inside the Seminole Hard Rock Hotel and Casino in Fort Lauderdale, FL. Unfortunately for the boxing great, former Ultimate Fighting Championship star, Vitor Belfort gave the 58-year-old an unwelcomed return to the ring.

What happened: Holyfield’s comeback fight only lasted 1:49. A sad result for sure, but considering his age, that he was facing a man more than a decade younger, and competing on short notice, a victory was always going to be a challenge for the Atlanta resident. Belfort proved too fast and Holyfield’s reflexes too slow. He was overwhelmed quickly and the fight was over before he knew what happened.

The fallout: A case could be made the bout was ended too quickly. Holyfield did not seem badly hurt or without his wits. However, after falling on a missed punch, and legitimately being knocked down at one point in the fight, the former heavyweight champs age probably forced the referee to be more cautious and give him little leeway when the Brazilian put him in a difficult position. 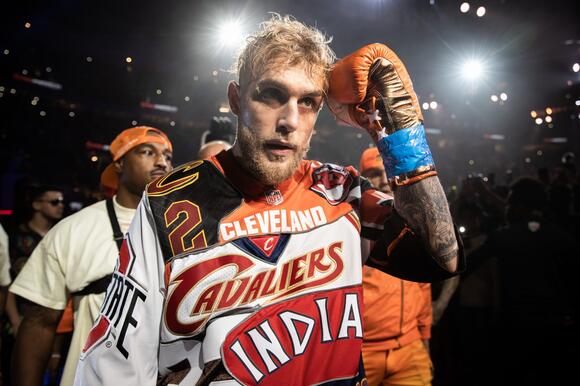 The roadmap ahead: There certainly won’t be a rematch, and the Triller brass were already positioning Belfort for a scrap with Logan Paul’s more talented brother Jake. However, there is no reason to expect Holyfield won’t get one more fight. Especially, since he did the promotion a favor and stepped in on short notice when Belfort’s original opponent, Oscar De La Hoya , tested positive for COVID-19.

What makes Evander Holyfield so popular?

The “Real Deal”: Holyfield is a legendary figure for beating some of the greatest fighters of his generation, and often times he was not the favorite going into those matchups. Although he maybe wasn’t the hardest hitter or had the fastest hands in his era, he made up for it with guts and technical boxing brilliance. 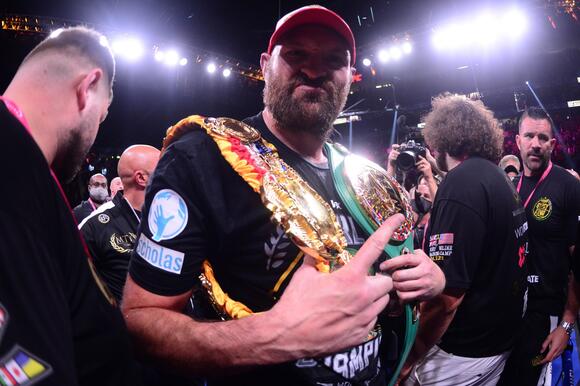 Also Read:
Tyson Fury’s next fight: Everything you need to know

The measure of a fighter is often down to the money they’ve made throughout their career. Due to various reasons, including owing back taxes to the IRS , Holyfield’s net worth went from upwards of US $200 million to an estimated US $1 million in recent years.

Evander Holyfield shouldn't be granted a boxing license unless he can fully understand from reading the contract himself and explaining in his own words why he should be able to fight.

UFC lightweight contender Michael Chandler apologized to his wife for the damage he took against Justin Gaethje at UFC 268. Chandler and Gaethje put on one of the greatest three-round fights in recent memory, going back and forth on the feet from start to finish. Both men had their moments, but ultimately Gaethje would leave the cage victorious via a unanimous decision.
UFC・20 DAYS AGO
worldboxingnews.net

A massive heavyweight clash between former World’s Strongest Men Eddie Hall and Thor Bjornsson will get eclipsed on April 2, 2022. That’s when “Iranian Hulk” Sajad Gharibi is penciled in to fight Martyn Ford in the latest to be the event labeled “The heaviest boxing match ever.”. The announcement comes...
COMBAT SPORTS・28 DAYS AGO
stillrealtous.com

In the world of professional wrestling a good character can take a talent to the top of the industry, and everyone seems to have an opinion regarding who the best character in wrestling is right now. Eric Bischoff recently discussed the current WWE product during an episode of 83 Weeks...
WWE・17 HOURS AGO
Insider

By Chris Williams: Terence ‘Bud’ Crawford is already looking past his opponent for this Saturday night in Shawn Porter by saying he wants superstar Canelo Alvarez. Like a glutton, Crawford (37-0, 28 KOs) isn’t satisfied with the filet mignon that’s on his plate this Saturday; he wants some tasty ribeye steak in targeting Canelo for that lottery money.
COMBAT SPORTS・19 DAYS AGO
fightsports.tv

Filming wasn’t as smooth as most movies go for Halle Berry. Halle Berry told Jimmy Kimmel on “Jimmy Kimmel Live” on Monday that during the filming of “Bruised,” which she stars in and made her directorial debut, UFC flyweight champion Valentina Shevchenko broke two of her ribs. Shevchenko stars in...
CELEBRITIES・18 DAYS AGO
bjpenndotcom

Jon Jones reveals he previously turned down a $80,000 per month deal with Hennessey’s sister company

Former UFC champion Jon Jones revealed that he previously turned down a $80,000 per month deal with Hennessey’s sister company. Jones (26-1 MMA), has not competed since February of 2020, when he defeated Dominick Reyes by unanimous decision to successfully defend the UFC light heavyweight title. Later that same year, ‘Bones’ announced that he would be vacating his 205lbs title in order to make a run at heavyweight gold.
UFC・2 DAYS AGO
boxingnewsandviews.com

If death is a beautiful thing, which it is by the way, so is life by the way, and if you’re a boxing fan — so is seeing the stories of some of these tremendous young fighters in the sport of boxing at a time. Continuing to compete in what...
COMBAT SPORTS・5 HOURS AGO

By Chris Williams: Gervonta ‘Tank’ Davis says he doesn’t want George Kambosos Jr’s four lightweight belts. As far as Tank is concerned, the Australian fighter can keep his titles, and he’ll whip his backside for free. Kambosos, 28, is fishing around looking for an opponent for the first title defense...
COMBAT SPORTS・4 DAYS AGO
fightsports.tv

Unified super middleweight champion Canelo Alvarez is waiting for his next opponent pending the winner of an upcoming rematch. Two-time heavyweight champion Floyd Patterson made history 65 years ago today. A man accused Billy Joe Saunders of stabbing his son after a street fight, but Saunders denies it. Today in the Fight Sports Daily News.
COMBAT SPORTS・6 DAYS AGO
fightsports.tv

Deontay Wilder Speaks For The First Time Since Knockout Loss Vs. Tyson Fury

Deontay Wilder doesn’t plan on stepping away from boxing, he’s just waiting for his broken hand to heal. Last Wednesday, Wilder sat down with his fiancé, Telli Swift, and gave an update for the first time since his trilogy loss to WBC heavyweight champion Tyson Fury. “Once this is over,...
COMBAT SPORTS・4 DAYS AGO
worldboxingnews.net

This week, Floyd Mayweather hit Mexico for the World Boxing Council Convention and got mobbed by a swarm of fans as he arrived. The five-weight world champion and all-around boxing legend got hit with a wave of love from the Mexico City faithful, known fanatics of the sport. Mayweather, who...
COMBAT SPORTS・21 DAYS AGO

Former WCW Star Offered To Wrestle In WWE For Free

In 2001 Vince McMahon bought his competition and before fans knew it they were watching an invasion angle play out before their very eyes. Stars from WCW started appearing on WWE programming, but unfortunately for Buff Bagwell his run with the company didn’t last very long. Bagwell only wrestled one...
WWE・19 HOURS AGO
The Spun

Vince Vaughn is 51 years old, but perhaps the legendary Hollywood actor is up for a fight. That’s what the UFC world is speculating about this weekend, anyway. On Saturday night, the longtime actor was called out by a fighter inside the ring. “Give me three months, and I’m ready...
UFC・1 DAY AGO
Bloody Elbow

After a brief hiatus last week, we’re back with more battles from the fringes of conventional combat sports. Lots of meat on the bone here, and we’re going to carve into it right away. Jerry, the bossman over at Fight Commentary Breakdowns delivers big this week. First we’re treated to...
COMBAT SPORTS・5 DAYS AGO
The Independent

Khabib Nurmagomedov insists Justin Gaethje is the hardest puncher he has ever faced in the UFC.Having mixed it with Conor McGregor and Dustin Poirier, The Eagle then called it a day after his next fight, which saw him knock off Gaethje on Fight Island, concluding a glittering career with a 29-0 record.But the October 2020 meeting was memorable for the Russian, who maintains the American “hit like a truck”.“This guy [Justin Gaethje] hit like a truck, you know,” Nurmagomedov told Mike Tyson on his Hotboxin’ podcast.“Nobody hit me harder than Justin Gaethje. His kick, his punch, his left hook, right...
UFC・13 DAYS AGO

Terence Crawford gave a clear message he wants to finally fight his great rival Errol Spence Jr, after being tipped as the better fighter by Shawn Porter. Crawford retained his WBO welterweight championship and his status as one of the world's best fighters by becoming the first man to stop Porter on Saturday night in Las Vegas.
COMBAT SPORTS・16 DAYS AGO
boxingnewsandviews.com

Floyd Mayweather became well known for his ‘Money’ nickname and mantra over the years but tonight when all was said and done it was a bit different. Speaking after his boxer Gervonta Davis who he promotes beat Isaac Cruz — Mayweather passionately addressed the media. While also speaking to other...
COMBAT SPORTS・1 DAY AGO
bjpenndotcom

Khamzat Chimaev explains why he refused to go on the Hotboxin’ podcast with Mike Tyson: “I don’t like what all happened with him”

UFC star Khamzat Chimaev has explained why he rejected the offer of going on Mike Tyson’s Hotboxin’ podcast. It’s safe to say that throughout his time in combat sports, Mike Tyson has been a polarising figure. From his stint in jail to some of his actions in boxing itself, he’s been on a rollercoaster ride that has left him with many critics to go alongside his large fanbase.
UFC・1 DAY AGO
bjpenndotcom

Ryan Garcia slams Floyd Mayweather for lying about fight offers: “I know you like to beat on ‘pretty girls’ but this one going to beat your ass back”

Boxing star Ryan Garcia has slammed Floyd Mayweather and Gervonta Davis as the build to a potential fight between Garcia and Davis continues. Last Saturday night, Gervonta Davis took his pro boxing record to 26-0 with a hard-fought win over Isaac Cruz. In the immediate aftermath of his triumph, Ryan Garcia took to social media to call Davis out and claim that he wasn’t fighting elite-level opposition.
COMBAT SPORTS・7 HOURS AGO