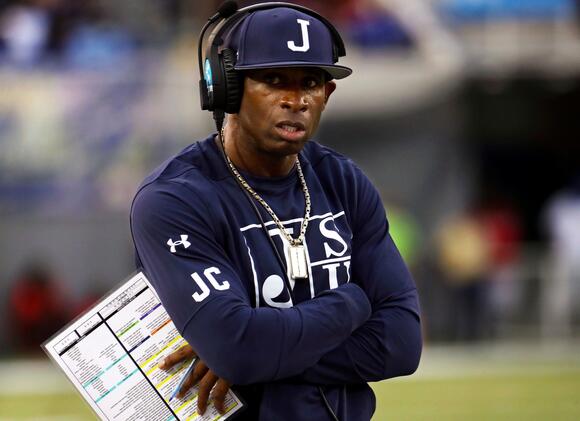 The Jackson State football team , coached by Deion Sanders , is ready to make a statement against Louisiana-Monroe on Saturday — even if history suggests it won't .

"Normally you just get paid to go to get beat, right?" Sanders said Monday during a conference call with Southwestern Athletic Conference media. "That's really the goal, right? Somebody pays you, your program makes more money than they normally will to go get your butt kicked.

JSU (2-0) is seeking its first win against an FBS program since at least 1978, according to NCAA.com , when it faces ULM (0-1) at 7 p.m. Saturday in Monroe. ULM has lost 12 straight games, tied for the longest losing streak in the nation, and Jackson State has emerged as one of the premier programs at Historically Black Colleges and Universities.

GUARANTEE GAMES ARE BACK: But COVID cancellations have changed the financial landscape

The juxtaposition makes Saturday's game a viable double-dip opportunity for the Tigers, who will be paid $350,000 for playing the game — win or lose — according to the game contract obtained by USA TODAY Sports . JSU will earn $350,000 when it returns to Monroe for a second game in 2024.

"Normally when you play against a powerhouse like I see some of the HBCU schools have taken, it helps the budget, but it kills the morale," Sanders said. "How can getting your butt kicked, I mean really kicked, help you as a team? Financially, cool. All money ain't good money."

An HBCU program hasn't scored an FBS upset since 2018, when North Carolina A&T beat East Carolina, 28-23. But the feat is becoming more common overall at the FCS level, which includes all programs from the SWAC.

"We just want to go out there and execute, do what we're blessed to do," Sanders said. "Excel. We're going to find out who some players really are this week because you're going to have a real formidable opponent that we're supposed the lose by all accounts. We weren't supposed to be in this game, right? We get paid to get beat, right?"

JSU routed Tennessee State, 38-16, in the Southern Heritage Classic on Saturday . Sanders said his defensive unit didn't show adequate improvement, but the offense made plays that it didn't in a 7-6 win over Florida A&M in the season opener.

Sanders signed the highest-rated recruiting class in FCS and HBCU history in 2021, with a national recruiting ranking 44 spots ahead of ULM's, according to the 247Sports Composite. None of that has changed his approach to Saturday's game against the Warhawks.

This article originally appeared on Mississippi Clarion Ledger: Deion Sanders not buying Jackson State's role in next matchup: 'We get paid to get beat, right?'

So its okay for corporate to pat teams to throw games but it wasn't okay for Pete Rose to bet on the outcome of games while not throwing games and becoming the all time hits leader.

He is making noise a leader makes. I am pleased he’s not afraid to be a man.

Deion Sanders is currently the head coach at Jackson State in Mississippi. Some believe that he’ll ultimately end up in Tallahassee, leading Florida State, where he starred in college. However, could another major program hire Coach Prime before that?. FOX announcer Gus Johnson said on Sunday afternoon that he’s heard...
COLLEGE SPORTS・27 DAYS AGO
saturdaydownsouth.com

Deion Sanders must be having the time of his life, coaching his son Shedeur at Jackson State this season. On Saturday, against Alabama A&M, the Tigers are routing their opponents, leading 61-15 midway through the fourth quarter. Shedeur scored a touchdown in the game and then broke out a familiar...
NFL・7 DAYS AGO
theundefeated.com

JACKSON, Miss. — A couple of hours before Jackson State coach Deion Sanders leads his team on the field against Alabama A&M, he’ll place his pregame outfit on the floor in front of him and study it. He’ll scrutinize the shirt, the shorts, the shoes, the socks and the baseball...
NFL・10 DAYS AGO
Montgomery Advertiser

Model and author Brittany Renner returned to Jackson State for homecoming this year. Renner played women's soccer at JSU. She was the MVP of 2010 SWAC Women's Soccer All-Tournament Team and led Jackson State to a 2-0 win against Mississippi Valley State for a berth in the 2010 NCAA Women's Soccer Tournament.
COLLEGE SPORTS・23 HOURS AGO

Deion Sanders showed the aftermath of the foot surgery he had last month to repair a dislocated toe. The legendary NFL cornerback, who is now the head coach at Jackson State, had the surgery to repair the dislocated toe in September. Sanders’ doctor told TMZ Sports that the Hall of Famer likely had been dealing with the injury since he was playing in the league.
NFL・2 DAYS AGO
247Sports

The Jackson State Tigers coached by Deion Sanders are 3-1 entering this weekend’s matchup against Alabama A&M. Ahead of the game, Alabama A&M coach Connell Maynor poked fun at Sanders’ recent foot surgery, which required him to use a scooter to get around. “Hey, Coach Sanders, I hurt my ankle...
NFL・11 DAYS AGO
The Spun

Prior to the 2021 college football season, the NCAA Division I Council voted to approve new rules allowing college athletes to transfer one time without having to sit out a year. Paired with an already-increasing usage of the transfer portal, this change is already beginning to alter the college football landscape.
NFL・9 DAYS AGO
WJTV 12

Alabama State coach Donald Hill-Eley had nothing but positive words for Jackson State coach Deion Sanders on Monday's Southwestern Athletic Conference conference call. "I think is a game changer as it relates to HBCU football," Hill-Eley said. "You have a man that has for 30 years built a platform of entertainment, and a persona that people like to see. Aflac commercials, all kind of stuff that's going on, that you can't, as a program compete with that part."
ALABAMA STATE・5 DAYS AGO
The Spun

Deion Sanders and the Jackson State Tigers will head to Huntsville, Alabama this upcoming weekend to take on Alabama A&M in an intriguing SWAC match-up. The game is still a handful of days away, but the head coaches from both programs have already started to take shots at one another.
HUNTSVILLE, AL・11 DAYS AGO
Yardbarker

Trevon Diggs and Everson Walls and Deion Sanders have some things in common. That’s come in a hurry, to the point where Walls’ team record for interceptions in a single season is now in danger. Diggs intercepted his fourth and fifth passes of the season on Sunday as the Cowboys...
NFL・10 DAYS AGO
Sports Illustrated

A surprise scholarship and a record turnout for attendance, Coach Prime and the Tigers keep it rolling.
ALABAMA STATE・5 HOURS AGO

Coming off a much-needed bye week, Deion Sanders's Tigers return to the gridiron for their first October test on the road.
ALABAMA STATE・9 DAYS AGO
Audacy

Dallas Cowboys CB Trevon Diggs is making an early case as this year’s NFL Defensive Player of the Year. He is currently leading the league in interceptions with six and is arguably the anchor for an improved Cowboys defense that has taken great leaps after being near the bottom of league in every statistic last season.
NFL・5 DAYS AGO
footballscoop.com

Get the popcorn ready. It’s Deion bringing his SWAC Tigers to Alabama A&M’s ‘Maroon Out’

Deion Sanders, Jackson State Ready for Alabama State in 'Homecoming for the Ages'

With its best start to the season since 2011, Sanders hopes to see fans pack the stadium Saturday for JSU's iconic homecoming.
ALABAMA STATE・1 DAY AGO
The Clemson Insider

Ohio State head coach Ryan Day delivered some tough news as the Buckeyes head into their Week 4 matchup against Akron during his weekly radio show Thursday. In all likelihood, there will be a new (...)
OHIO STATE・23 DAYS AGO
On3.com

Oklahoma quarterback Spencer Rattler might be losing his job to true freshman Caleb Williams, but for purposes of NIL deals, that might not matter too much. The most marketable athlete in college sports based on social media statistics entered the season as the favorite to win the Heisman Trophy. His position as the starter at “QB U” earned him two cars, gifted to the recognizable face by Fowler Automotive Group near Oklahoma City.
OKLAHOMA STATE・2 DAYS AGO
saturdaydownsouth.com

Dan Mullen’s Florida Gators faced an LSU team on Saturday that rushed for 499 yards through its first 6 games. The Tigers ran for 321 yards on Todd Grantham’s UF defense in a 49-42 upset win in Baton Rouge. Despite the loss and the poor performance by the Florida defense,...
COLLEGE SPORTS・16 HOURS AGO