Chrissy Teigen tells how she had cheek reduction surgery – so what is it? 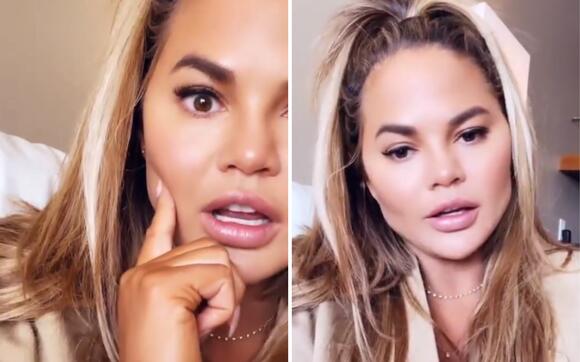 Chrissy Teigen has revealed that she had cheek reduction surgery as she showed off her new look on her Instagram stories over the weekend.

The 35-year-old model posted a video to her story and tagged Dr. Diamond. She added the text “No shame in my Mr Diamond game" over the video.

Dr. Jason Diamond is a famous plastic surgeon whose clinic has been visited by A-listers including Kim Kardashian and Kourtney Kardashian.

Pointing to her cheek, she said: “I did that Dr. Diamond buccal fat removal thing here, and since I quit drinking I’m really seeing the results and I like it.”

Teigen has just recently celebrated 50 days of sobriety and posted a video to Instagram along with her children to share the milestone with her 35 million followers. Today she celebrates another important event ⁠— her eighth wedding anniversary with singer John Legend. “It’s our anniversary,” Legend wrote on Instagram, “I love you forever.”

Sign up to our free Indy100 weekly newsletter ‘The Viral Democracy’

Teigen’s Instagram video was reshared by The Cosmetic Lane on Twitter but, worryingly, the cosmetic doctor from E4’s Body Fixers Dr Tijion Esho replied and said he would have removed her jaw filler instead as the procedure could “rapidly age” the star.

Teigen has long been open about the cosmetic procedures she’s had, and previously remarked that "everything about me is fake except my cheeks” and added “fake, fake, fake” as she pointed to her forehead, nose and lips.

Although she was being hyperbolic about having “everything” done, she previously went public about removing fat from her armpits and reversing her breast implant surgery.

The little pads of fat in the hollows beneath our cheekbones are called buccal fat. Although everyone has buccal fat, some have larger ones which can give the face a round or “baby faced” look. Removing the buccal fat can slim down round faces.

According to Healthline, the procedure can be carried out under local anesthesia, meaning the patient will be awake during the surgery. The surgeon makes an incision on the cheek, and removes the fatty pads.

Recovery takes approximately three weeks, during which time patients have to use a special mouthwash to ward off infections and slowly reintroduce soft foods into their diets.

The slimming result is permanent because buccal fat is a “discreet fat pad” that is independent of the fat under the skin that fluctuates with weight gain or weight loss, according to Dr. Donald B. Yoo.

When are all these women going to realize that all the surgeries in the world won’t help them, it doesn’t change their personalities & that’s their real problem!

Changing her looks doesn't change the ugliness in her heart.

This is one vain transgender man, biologically born male.

Khloe Kardashian’s beauty transformation has been well documented across the internet, and the reality star and ‘Good American’ owner only continues to evolve as she posted an ad video to Instagram looking different than usual early this week. The new look comes after it was alleged that Kardashian was not in attendance at the Met Gala for reportedly being “too C-list,” although many of her family members were there.
CELEBRITIES・19 DAYS AGO
People

Radha Rao normally plays John Legend's hit song "All of Me" when she performs in Boston's historic Faneuil Hall Marketplace, but it was quite the shock when the singer himself popped up as she was singing the ballad during her set on Sunday. "I was just doing my normal gig...
MUSIC・3 DAYS AGO
12 News

Chrissy Teigen wants to know why there are so many mosquitos in Arizona. Here’s the answer

Model Chrissy Teigen took to Twitter on Thursday to point out that, despite the hot, dry Arizona weather, there is an unusually large number of mosquitos in State 48. "There are more mosquitos in Arizona than anywhere I’ve ever been. How on earth. So dry!!" Teigen wrote. So why are...
ARIZONA STATE・5 HOURS AGO
laconiadailysun.com

Chrissy Teigen "felt suctioned to the couch" after her pregnancy loss. In 2020, Chrissy and her husband John Legend - who have children Luna, five, and Miles, three, together - announced they were expecting their third child together. However, Chrissy suffered partial placenta abruption and the baby, they named Jack, was stillborn.
WOMEN'S HEALTH・5 DAYS AGO

Chrissy Teigen Shares Adorable Video Sent by Her Kids While She's Away: 'We Miss You So Much'

Chrissy Teigen's kids are sending their love while Mom is away. On Monday night, the Cravings: All Together author shared three videos on Instagram that were sent to her while she's apart from her children, whom she shares with husband John Legend. In the adorable messages, 3-year-old Miles Theodore and 5-year-old Luna Simone tell Teigen they miss her and want her to call them ASAP.
FAMILY RELATIONSHIPS・2 DAYS AGO
arcamax.com

Chrissy Teigen thinks she's "emerged stronger" from the heartache of losing her son. The 35-year-old model and her husband John Legend lost their unborn baby, Jack, in September 2020, and Chrissy has opened up about their pain in the introduction for her upcoming cookbook, 'Cravings: All Together'. Chrissy writes: "Without...
CELEBRITIES・3 DAYS AGO
Us Weekly

Chrissy Teigen Reflects on Depression After Pregnancy Loss: ‘I Felt Suctioned to the Couch’

Opening up. Amid Pregnancy Loss Awareness Week, Chrissy Teigen is remembering her postpartum journey and sharing her candid thoughts via social media. “Pregnancy loss awareness week you say?? I know. I feel like I never let you forget it, either, the Cravings founder, 35, wrote via Instagram on Saturday, October 16. “But I was going through BTS of cookbook making with @adeenasussman and came across this photo, taken soon after losing our little jack.”
WOMEN'S HEALTH・5 DAYS AGO
Mashed

Last week was Baby Loss Awareness Week, according to the organizers' website, and the occasion undoubtedly brought up painful memories for Chrissy Teigen. Fans of the model turned cookbook author surely remember September 2020, when Teigen miscarried the child she and husband John Legend had already named Jack. She posted an emotionally raw photo of herself on Instagram September 30 of last year, sitting on a hospital bed in the throes of grief. It was an honest, moving image that not everyone appreciated, according to BBC.
CELEBRITIES・3 DAYS AGO

Trick or treat — give Us something sweet to eat!. Us Weekly asked a whole host of stars, including Chrissy Teigen, Kristen Bell and Kerry Washington, to name their favorite Halloween candies, and the results were a bit surprising. According to USA Today, 36 percent of Americans picked Reese’s Peanut...
CELEBRITIES・4 DAYS AGO
ABC 4

On Good Things Utah this morning – Chrissy Teigen is opening up about how her cookbook and friends helped her get through the grief of losing her “baby jack” more than a year ago. In an Instagram post on Monday, Teigen noted that it is Pregnancy Loss Awareness week. She found a behind-the-scenes photo from working on her latest cookbook with Adeena Sussman, “soon after losing our little jack.” The photo shows Teigen under a blanket as Sussman worked next to her.
BEAUTY & FASHION・2 DAYS AGO
CinemaBlend

After Kourtney Kardashian And Travis Barker Got Engaged, Her Sisters Outed Her Huge Rock

In what is probably the most inevitable news of the last year, Kourtney Kardashian and Travis Barker are engaged. The two lovebirds have been engaging in public PDA for months and have been seemingly smitten with one another. The whirlwind romance has now culminated in an engagement, and it’s one that Kourtney Kardashian shared herself. What she didn’t share was the huge bling Travis Barker gave her. The good news? Kim Kardashian and Kylie Jenner are here to assist with that.
CELEBRITIES・3 DAYS AGO
E! News

Watch: Kim Kardashian Shares First Close-Up Photo of Psalm West. Psalm West proved nothing gets in the way of his TV time—even mom Kim Kardashian!. The KKW Beauty mogul, who shares four kids with ex Kanye West, recently let fans in on what quality time with the toddler is really like. In an adorable video posted to her Instagram Story on Sept. 27, Kim attempted to shower Psalm with enough kisses for a lifetime. However, the 2-year-old was quite preoccupied with other things, including watching his favorite show on TV.
CELEBRITIES・23 DAYS AGO

When it was first revealed that Kim Kardashian would be hosting Saturday Night Live for the first time, people were skeptical if she could pull it off. After all, Kim is known for a lot of things, but funny is not one of them. But to most everyone's surprise, Kim killed it once she stepped out on stage. Her jokes didn't fall flat, they were actually funny, and she didn't hold back, taking shots at herself, her famous family, and even her estranged husband, Kanye West.
CELEBRITIES・11 DAYS AGO
TODAY.com

Rachel Maddow is sharing an important message with her viewers after she had her own experience with skin cancer. The MSNBC host recalled during a recent episode of "The Rachel Maddow Show" that she was at a minor league baseball game with her partner, Susan Mikula, who noticed at the time that a mole on Maddow's neck had "changed."
CELEBRITIES・14 DAYS AGO
TVShowsAce

Khloe Kardashian Rejected From TV For Being Too ‘Racy’

Khloe Kardashian recently did an ad for Good American, her clothing brand, and she took her top off for it. Apparently, it was too racy for TV. Anyone who follows Khloe Kardashian on Instagram knows that she recently posted a topless video of herself. The former Keeping up with the Kardashian star was rolling around in simply a pair of jeans. She held a top/her arm over her chest so that she didn’t actually show anything “bad.”
CELEBRITIES・21 DAYS AGO
Footwear News

The Los Angeles Lakers are beloved and known for bringing out plenty of famous faces, from Jack Nicholson and Larry David to Kim Kardashian, Courteney Cox and Lizzo. Celebrities have been sitting courtside for years and it’s not uncommon to see a Hollywood star pop up on the jumbotron and give a wave to the crowd. Most recently, Adele was spotted in the coveted seats sporting a head-turning chocolate look with her new boyfriend Rich Paul. Rapper Saweetie, clad in a bright green jacket, was seen talking to the singer. Ahead of COVID restrictions in early March 2020, Michale B. Jordan and...
NBA・1 DAY AGO
enstarz.com

Kris Jenner has a lot of say in her kids' decisions, especially towards the richest ones. According to the National Enquirer, the momager allegedly demands Kim Kardashian to call off her divorce from Kanye West. The reported reason for Jenner's order isn't genuinely shocking. Kris Jenner Demands Kim Kardashian 'Make...
CELEBRITIES・3 DAYS AGO
E! News

Mariah Carey apparently was not enjoying a sweet fantasy after Nick Cannon gave their twins a certain birthday gift this year. On Thursday, Oct. 7, a preview clip from his daytime talk show Nick Cannon showed the 41-year-old host of The Masked Singer revealing that ex-wife Mariah wasn't pleased when he went behind her back to buy cell phones for their twins Moroccan and Monroe to celebrate their 10th birthday in April. Nick and Mariah finalized their divorce in 2016, and he has since welcomed five children from other relationships.
CELEBRITIES・13 DAYS AGO
Hello Magazine

Celine Dion left fans heartbroken as she announced a devastating health update that ultimately led to some very sad news. The singer shared a statement on her Instagram where she revealed that due to unfortunate developments in her health, the opening of her new Las Vegas residency would be delayed.
CELEBRITIES・2 DAYS AGO