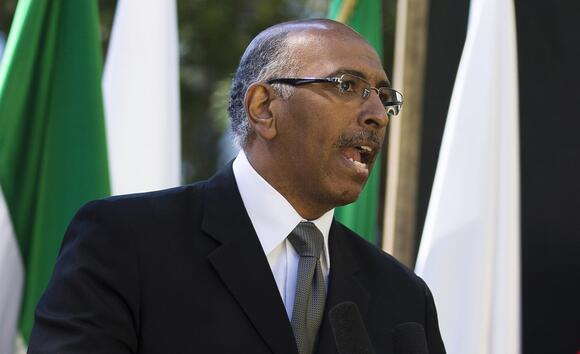 Republican establishment figures in deep-blue Maryland are bewildered Michael Steele would seek the party’s nomination for governor after voting for President Joe Biden and spending the last six years bashing the party and its elected leaders.

Between Steele’s oft-repeated suggestions his party is gripped by racism, misogyny, and white nationalism and his preferred venue for leveling those charges — MSNBC, the media outlet at which the former lieutenant governor was a paid contributor from 2003-2007 — some Maryland Republicans are having a hard time understanding why he would ask GOP voters for support. These questions are emphasized by the fact the bid for the state’s highest office is up for grabs in a closed primary in which he could run as an independent or even a Democrat.

Like Steele, Maryland Gov. Larry Hogan has criticized former President Donald Trump and has admitted never voting for him in 2016 or 2020 — yet it has not diminished his popularity with Republicans in his state. But unlike Steele, Hogan did not vote for Biden and has not painted his party with a broad, negative brush that went beyond Trump to include Republicans in Congress and GOP voters.

“If his plan over the past couple of years was to run for governor as a Republican, he’s gone about it in an odd way,” said Maryland Republican Party Chairman Dirk Haire, who is neutral in primary contests. “And, I don’t just mean his comments on President Trump. In several settings, he’s made derogatory comments on rank-and-file Republicans.”

Steele, 62, is exploring a run for governor in 2022, likely to make a final decision on whether to mount a campaign by early November.

ELDER ALLEGES 'FRAUD IN CALIFORNIA' AHEAD OF RECALL ELECTION

For now, Steele is traveling the state, fielding public opinion polls, and engaging in other activities to determine if his candidacy is viable. On Tuesday, a spokesman for Steele fired back at GOP critics who say the former Maryland lieutenant governor has forfeited his right to ask Republicans for their vote because he has been largely critical of the party writ since Trump won the party’s presidential nomination in 2016.

“I think they’re dead wrong,” said Jim Dornan, the Republican strategist leading Steele’s exploratory effort. “Michael Steele has not changed his views as to what it means to be a Republican or conservative.”

Steele made a name for himself as Republican National Committee chairman, a position his GOP counterparts elected him to a few years after his stint as lieutenant governor and as former President Barack Obama assumed office. As RNC chairman, Steele was mercilessly critical of House Speaker Nancy Pelosi, then in her first stint with the gavel. At RNC headquarters, adjacent to Capitol Hill, every window showcased a “Fire Pelosi” placard.

Steele presided over the national party during the 2010 midterm elections when Republicans recaptured the House in a historic, 63-seat pickup (they fell short of the majority in the Senate but still flipped seven Democratic seats.) But Steele was ousted soon after, in favor of Reince Priebus, amid high-profile controversies that garnered uncomfortable media scrutiny and complaints about his management of party finances.

Six years later, with the rise of Trump, Steele became one of the most recognizable Republican critics of the party’s new leader — and the party in general. In August of last year, Steele joined the Lincoln Project as an adviser. The group was founded by renegade Republicans who opposed Trump but, by the time Steele signed on, had expanded its mission to helping Democrats win back the Senate.

Steele resigned from the Lincoln Project soon after the November election, later claiming he opposed its efforts to oust incumbent Republican senators.

Some Maryland Republicans trying to discourage Steele from running for governor are being pragmatic. They fear the former lieutenant governor would attract enough votes in the primary to box out Hogan Cabinet Secretary Kelly Schulz and help state legislator Dan Cox advance to the nomination.

Maryland is among the most solidly Democratic states in the country, and Republicans fear they will not have a fighting chance with Cox, regardless of how poorly Biden polls and how well the GOP does in other states.

To a degree, the concern that Steele would have enough legs to win votes in the primary fits with what Steele’s camp claims it hears in conversations and visits in the state. Dornan said Steele still has a following and that Republicans are responding positively to the idea of him running for governor.

“Michael is by far the strongest Republican candidate the party could put up against a very strong field of Democrats,” he said.

Kathy Szeliga, a Republican state legislator and previous Senate candidate, finds that assertion preposterous. Szeliga said she is not worried Steele would pave the way for a weak general election candidate to win the Republican primary — because she does not believe he would have a minimal impact on the race regardless of the candidate field.

“We’re talking about Republican primary voters who are faithful and show up for every election,” she said. “There’s no way they would vote for him.”

I watched a number of his cable news appearances. He was against what’s been happening to the GOP. He feels they have lost their moral compass. He was Lt. Governor to Erlich so he has qualifications to be Governor.

WHENNN will republicans realize that the party is a mess. They talk about MORALS and elected TRUMP as president. You have Larry Elder and Caitlyn Jenner as part of this party. I mean if there EVER was a time for a THIRD political party its NOW

This is just further proof that the Republican party is out of touch and who they really work for. He criticized the party itself, not the voters. Therefore he is perfectly fine asking voters to support him.

The California congressman has called the former president a "clear and present danger" to democracy.
POTUS・13 HOURS AGO
CNBC

The Renew America Movement is urging moderate Republicans to support Democrats as part of a bid to defeat the pro-Trump GOP.
U.S. POLITICS・22 HOURS AGO
Newsweek

The president was visiting Connecticut to promote his administration's child care proposals.
HARTFORD, CT・16 HOURS AGO

Divisions among Democrats on key issues like infrastructure could help the former president's prospects.
PRESIDENTIAL ELECTION・20 HOURS AGO
Business Insider

State Sen. Doug Mastriano, who pushed false claims about the 2020 election, said, "I guess I shouldn't call it a 'vaccine.'"
PENNSYLVANIA STATE・9 HOURS AGO
blogforarizona.net

WASHINGTON — In the last 24 hours, Virginia’s contest for governor has suddenly turned into a story about Donald Trump. And that’s become great news for Democrat Terry McAuliffe and bad news for Republican Glenn Youngkin. It all began when Trump called into a Steve Bannon-headlined event Wednesday in Virginia...
VIRGINIA STATE・23 HOURS AGO

Republicans for Voting Rights, an organization operating under the Defending Democracy Together, has launched a quarter-million-dollar campaign to erect dozens of these billboards in major markets across the country.
PRESIDENTIAL ELECTION・1 DAY AGO
KITV.com

At a rally Wednesday night for the Virginia gubernatorial candidate Glenn Youngkin, attendees pledged allegiance to a flag they were told had been carried at the "Stop the Steal" rally on January 6 -- the same rally that led to a violent insurrection at the US Capitol later that same day.
PRESIDENTIAL ELECTION・1 DAY AGO
KREX

WASHINGTON (AP) — President Joe Biden on Thursday signed into law a bill raising the nation’s debt limit until early December, delaying the prospect of an unprecedented federal default that would cause economic disaster. The House passed the $480 billion increase in the country’s borrowing ceiling on Tuesday after the Senate approved it on a party-line vote […]
CONGRESS & COURTS・22 HOURS AGO
CBS News

Republican Virginia gubernatorial candidate Glenn Youngkin is distancing himself from a Wednesday night event in support of him where attendees pledged to a flag that was said to be flown at the January 6 attack on the U.S. Capitol. The flag was flown at the "Take Back Virginia Rally" in...
POLITICS・1 DAY AGO

Donald Trump has become the favourite to win the election in 2024, as Joe Biden falls behind the former US president and faces challenges with his domestic agenda. Mr Trump, according to betting odds, had been ahead in the race for the Republican nomination in 2024 but had not been on odds for a win in the election.However, recent odds byBetfair Exchange found Mr Trump is now 4.8 to win in 2024. Mr Biden, meanwhile, was at 5.1 after falling behind his own vice president, Kamala Harris, in the presidential tie-up. Although neither Mr Trump nor Mr Biden have...
PRESIDENTIAL ELECTION・1 DAY AGO
Fox News

With the Democrats playing defense as they try to hold onto their razor-thin majorities in both houses of Congress next year, and Republicans enjoying historical tailwinds at their backs, House GOP leader Kevin McCarthy's quite confident his party will win back control of the chamber in the 2022 midterm elections.
CONGRESS & COURTS・2 DAYS AGO
POLITICO

The latest letter helps establish a paper trail for what could be a serious executive privilege fight. Biden's stance: President Joe Biden's counsel, Dana Remus, on Friday declined to grant executive privilege to shield an initial batch of Trump-era documents sought by congressional investigators probing the Jan. 6 attack. The former president pushed back, asserting broad privilege, and Remus replied in the negative on Wednesday.
PRESIDENTIAL ELECTION・2 DAYS AGO
MSNBC

The Republican Party doesn't have a platform. Or a policy agenda. Or substantive issues it's eager to work on. Or compelling leaders who are ready to govern. What defines the contemporary GOP — the one thing that animates the party more than anything else — is an unshakable belief in a ridiculous lie about Donald Trump's 2020 defeat. The former president boasted at an Iowa rally this past weekend, "It's the single biggest issue, the issue that gets the most pull, the most respect, the biggest cheers is talking about the election fraud of the 2020 presidential election."
POTUS・2 DAYS AGO

Jill Biden out to flex political muscle in governors’ races

WASHINGTON (AP) — First lady Jill Biden is set to campaign Friday for Democrats in governors’ races in Virginia and New Jersey, her most overt foray into politics since arriving at the White House nine months ago. Her involvement is the latest sign that Democrats are pulling out the stops in the upcoming elections, particularly […]
PRESIDENTIAL ELECTION・21 HOURS AGO
WashingtonExaminer

Will Trump play the role of spoiler for Republicans in Virginia governor's race?

Former President Donald Trump’s splash dive into the Virginia governor’s race on Wednesday has come at an unhelpful time for Republican candidate Glenn Youngkin. Trump inserted himself into the Virginia contest with the help of his former adviser Steve Bannon, who held a Wednesday rally for Youngkin in the Richmond suburbs. Trump called into the event and once again endorsed Youngkin, a candidate he has previously backed but also criticized for not welcoming his support enthusiastically enough.
VIRGINIA STATE・1 DAY AGO
POLITICO

The former Virginia governor’s Republican opponent, Glenn Youngkin, later distanced himself from the event and condemned the pledge.
POLITICS・1 DAY AGO