Mel B, also known as Scary Spice, recently opened up about the possibility of a future Spice Girls reunion, which she hopes will take place in 2023.

According to the 46-year-old, she is always pushing for the group to get together again and revealed that last year there were talks of a reunion but that the COVID-19 pandemic affected their plans.

During a guest appearance on "Steph's Packed Lunch," Mel B joked that her bandmates will kill her for saying it but that they're hoping, especially her, for a tour next year.

The "America's Got Talent" judge said that, if it is up to her, the group will hit the stage once again, and described herself as the "driving force" behind the decision.

The famous pop group tour's last reunion took place in 2019, when Mel B, Emma Bunton, Melanie Chisholm, and Geri Halliwell performed for 13 days around the United Kingdom and Ireland. 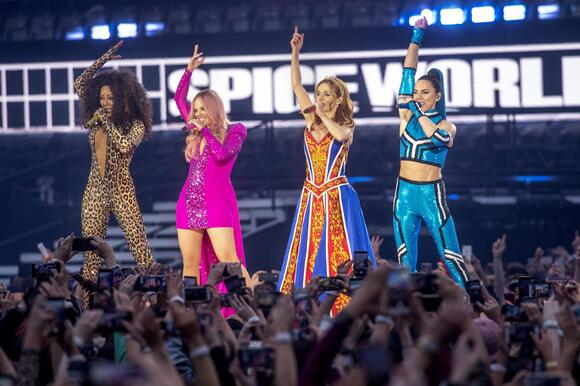 The most famous Spice Girl, Victoria Beckham, chose not to join her bandmates, which didn't please Mel B. However, she respected her decision. She said:

"We did our last tour and Victoria respectfully ducked out, and you have to respect when someone doesn't want to go on tour."

According to Mel B, she was upset not to see Posh Spice during the tour, adding that she didn't even have to step on stage but that she could have at least said "hi" or been there as a member of the audience.

Victoria is currently focused on her luxury designer brand.

Victoria, who was part of the "Return of the Spice Grils" tour in 2007 and 2008, claimed she opted out of the 2019 reunion because she wanted to focus on her family.

At the time, the Posh Spice told Vogue Germany that it took a lot of courage to be the one to say "no" but that she felt things were not the way they used to be. She said:

"I'm 45 now and very happy to be the woman I am. I'm not trying to change, I want to be the best version of myself. Before I turned 40, I wasn't that confident. I learned to listen to my gut feeling."

A woman in Rhode Island is facing a lawsuit after making false police reports about a little boy’s whereabouts that left the whole town in a frenzy. Daniela Peraza Lemus of Central Fall got herself nose deep in a legal issue following a bizarre incident involving a 2-year-old boy. According to the reports, the woman allegedly pretended to be a Good Samaritan who found a lost child and handed him over to the cops.
PAWTUCKET, RI・13 HOURS AGO
Amomama

Popular entertainer Diana Ross has proven she can be the best in everything she does, including motherhood. Let's meet the singer's well-raised children who are married and established in their careers. American singer Diana Ross is one of the most successful singers of the rock and roll era. She is...
RELATIONSHIPS・3 DAYS AGO
Amomama

Philip McKeon rose to fame as a child star, primarily recognized as Tommy Hyatt in the television series "Alice." Yet his most admired trait was his close bond with his sister, "Wild Hearts" actress Nancy McKeon. Philip McKeon is famous for his role in the 1976 CBS sitcom "Alice." But...
CELEBRITIES・4 DAYS AGO
Amomama

He saw a girl begging on the sidewalk and somehow couldn't get her face out of his mind. He had to know her story. Wealthy businessman Roger Landers was often annoyed by the sight of the homeless begging on the street outside his office building. There seemed to be more and more of them each year, he reflected.
HOMELESS・5 DAYS AGO

The Spice Girls‘ Mel B took to Instagram on Wednesday to reveal that she’s recovering after contracting COVID-19. “In my head I’m here @youandmemaldives ahhhh what a beautiful place, sunshine crystal clear sea being totally spoilt rotten in my private villa named after me but in reality right now I’m curled up in bed getting over the final long haul of COVID,” Mel — a.k.a. Scary Spice — shared, along with a montage of photos from a recent vacation.
PUBLIC HEALTH・9 DAYS AGO
The Independent

Mel B reveals she’s still recovering from Covid after five weeks: ‘Covid is no joke’

Spice Girls star Mel B has revealed she has been suffering from Covid-19 for five weeks and is still recovering. The pop singer born Melanie Brown shared a series of throwback photos to her Instagram account.They showed the star on a trip to the Maldives, where she stayed in a private villa named after herself, posed in bikinis and swam in the ocean.“In my head I’m here,” she wrote, before going on to admit that the reality was that she was “curled up in bed getting over the final long haul of Covid”. The 46-year-old included the hashtags #Itsbeenfiveweeksnow...
PUBLIC HEALTH・9 DAYS AGO
musictimes.com

Mel B Halts Talks of Spice Girls Reunion, Admits To Being Bedridden for Over a Month

Mel B has admitted to having Covid-19. Hers is the long and extended kind, so it's severe. She shared that she's in bed for over a month now. The Spice Girl, 46, went to Instagram on Wednesday to tell her fans that she has been bedridden for five weeks due to coronavirus, adding, 'It's no joke!'
CELEBRITIES・9 DAYS AGO
thebrag.com

Nineties pop icons The Spice Girls are celebrating 25 years since they exploded on the music scene by partnering with Universal Music Group’s Bravado for a wide-ranging deal. The agreement will see the Spice Girls and UMG “work hand-in-hand to deliver new products and capsule collections to retail partners around...
CELEBRITIES・10 DAYS AGO

Are The Spice Girls Still Friends With Each Other?

Melanie "Mel B" Brown, aka Scary Spice, just let us in on a little secret and it's something that we really, really wanted to hear: the Spice Girls will tour again. The band, with the exception of Victoria Beckham, aka Posh Spice, reunited in 2019 for "Spice World" and did a 13-stop stadium tour across the U.K. and Ireland. Now, they're looking to do it one more time (perhaps with Victoria), and we couldn't be more excited.
CELEBRITIES・20 HOURS AGO
Albia Newspapers

Mel B has coronavirus

Mel B has been battling coronavirus for over a month. The Spice Girls singer admitted she's longing to be on holiday in the Maldives but her current reality is that she is "curled up in bed" still recovering from the virus and watching television. Sharing throwback photos from her last...
PUBLIC HEALTH・8 DAYS AGO
Page Six

Alana Thomspon, also known as “Honey Boo Boo,” has finally gone Instagram-official with her boyfriend, Dralin Carswell, after six months of dating. “🎃🎃 spooky season 🎃🎃,” the reality star, 16, captioned a photo of herself and her 20-year-old beau at a pumpkin patch on Monday. The “Mama June: From Not...
CELEBRITIES・18 DAYS AGO
Lebanon-Express

Mel B left bedridden after battling Covid-19 for five weeks

In an Instagram post on Wednesday, the former America's Got Talent judge shared a collage of throwback photos from a holiday in the Maldives and admitted that her reality is very different from those snaps.
PUBLIC HEALTH・9 DAYS AGO

Camaryn Swanson Reveals Why She Pressed Charges Against Tyga

It has been a hectic week for Tyga after his ex-girlfriend, Camaryn Swanson, came forward with accusations of domestic abuse. Swanson pressed charges this week resulting in Tyga turning himself over to authorities on felony charges. Many were not aware that Tyga and Swanson were no longer dating, but the public has received intimate details about their sheltered romance.
CELEBRITIES・2 DAYS AGO
Outsider.com

The Conners spoilers follow. The Conners aired a lovely episode last night (October 13) in the US, as Louise Goldufski became part of the family by marrying Dan Conner. But it wasn't all plain sailing, as a tornado threatened to completely derail the day. Thankfully, Jackie Harris stepped in and pronounced them husband and wife.
CELEBRITIES・2 DAYS AGO
iHeartRadio

Leni Klum accompanied her dad, Seal, on the red carpet in a rare family outing. The 17-year-old aspiring model walked the red carpet with the musician, 58, for the premiere of the film "The Harder They Fall." The film was written and directed by Seal's (real name Henry Olusegun Adeola Samuel) brother, Jeymes Samuel.
CELEBRITIES・2 DAYS AGO
TVShowsAce

RHOBH fans want Lisa Rinna to mention it all. As TV Shows Ace previously reported, Rinna and her co-star Dorit Kemsley have been dubbed as “bullies” and “Karens” for their views on race at the reunion. Part one of the explosive four-part reunion premiered on Wednesday night. A preview of the first episode leaked online, which went viral on social media.
TV SHOWS・2 DAYS AGO
survivornet.com

The Voice host Carson Daly paid tribute to his mother, Pattie Daly Caruso, on the fourth anniversary of her passing by sharing their last photo and text message exchange. Daly Caruso suddenly passed away at the age of 74 and was caring for her husband and Daly’s stepfather Richard Caruso at the time, who had just received an end-stage cancer diagnosis.
CELEBRITIES・26 DAYS AGO
thefocus.news

Does Tessa Porter really sing on The Young And The Restless?