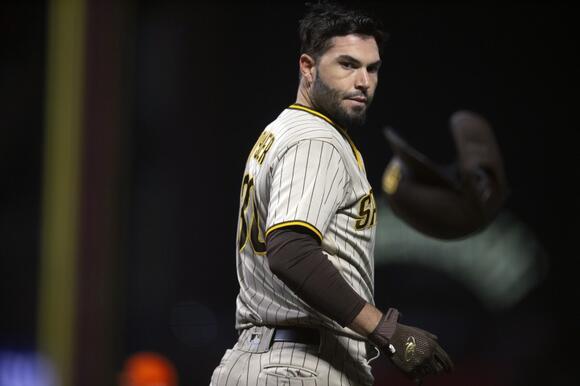 Another game, another day of the Padres going backward while also staying in about the same place they’ve been for the past four weeks.

They fell 6-1 to the San Francisco Giants Tuesday night at Oracle Park.

The Padres managed three hits and are batting a major league low .199 over their past 29 games. They have scored in five of their past 62 innings.

They are basically loitering.

Yet, since falling out of playoff position on Aug. 22, the Padres have never been more than two games back in the National League wild-card race and have most of the time been within a game or tied for the final spot and even spent one day ahead by a half-game. They began Tuesday down a half-game to the Cincinnati Reds and tied with the St. Louis Cardinals The loss left them a half-game behind the Reds and a full game behind the Cardinals.

That’s because the Reds lost to the Pirates, their 13 th defeat in 19 games since they first moved ahead of the Padres on Aug. 22. The Cardinals were 4½ games back at that point and have gained the ground simply by being two games over .500 (11-9) since, including a 7-6 victory over the New York Mets in 11 innings Tuesday.

This one was hit in the second inning by Buster Posey on a change-up Jake Arrieta left up and in.

It was the 14 th time in their past 29 games that the Padres were trailing by the second inning.

Posey’s blast was also the 18 th home run the Padres had allowed in 11 games this month. The Giants hit four homers in a 9-1 victory Monday. There has, in fact, not been a game in September the Padres have not allowed a least one home run. It is their second-longest such streak of the season, three shy of a 14-game streak that began Aug. 11.

Arrieta has allowed 24 home runs this season, though 21 of those were with the Chicago Cubs. That is sixth most in the National League and three fewer than Yu Darvish has allowed after the four he surrendered Monday. Just three NL pitchers have allowed more homers than Darvish. Emilio Pagán has allowed more homers (12) than any NL reliever, and Craig Stammen’s 11 are tied for second most.

The rest of the runs Tuesday were scored without anyone hitting a ball to the seats. That is not surprising on the Padres’ end. They have hit a major league-low 24 homers since Aug. 11.

The Padres tied the game 1-1 in the third when Jurickson Profar led off with a double, went to third on Arrieta’s sacrifice bunt and scored on a groundout by Trent Grisham.

The Padres, who got a two-out single from Adam Frazier in the second inning, got just one other hit the rest fo the night — a two-out double by pinch-hitter Jake Marisnick in the fifth inning.

The Giants, who clinched a playoff spot on Monday and entered Tuesday 2½ games ahead of the Dodgers in the NL West, took the lead back in the third and added a run in the fourth and seventh and two in the eighth.

With one out in the third inning, Posey lined a ball off Arrieta’s glove at 101.3 mph. Posey went to third on a single by LaMonte Wade Jr. and scored when Arrieta threw wide of first base on an attempt to merely get Wade back to the bag.

Arrieta hit Mike Yastrzemski to start the fourth, though it was Steven Duggar who came around to score after reaching on a fielder’s choice. After Duggar moved to second on pitcher Anthony DeSclafani’s sacrifice bunt, Tim Hill came in to face left-handed hitting Tommy La Stella, who hit the first pitch from Hill to center field to drive in Duggar.

Pierce Johnson, who pitched a perfect sixth inning, yielded a one-out single to Crawford in the seventh before being replaced by Daniel Hudson, who struck out Kris Bryant and then yielded a double to Ruf.

Closer Mark Melancon, who ostensibly needed the work, pitched in the eighth and allowed two runs on a walk, a double and an error.

Column: Dodgers, Giants remind Padres how far they are from baseball's October standard

NLDS dogfight raises concerns about what it will take to reach, excel in postseason
MLB・5 DAYS AGO
McCovey Chronicles

The San Francisco Giants lost to the Los Angeles Dodgers in Game 2 of the National League Division Series tonight. I can’t say there was much about this game that will be memorable in the annals of history. But there is one moment that stands out to me. It came in the bottom of the second inning. But first, some context.
MLB・12 DAYS AGO
knbr.com

Sportsbooks will be screwed if the San Francisco Giants win the World Series, but it hasn’t changed their handicapping for the National League Division Series. According to ESPN, multiple books stand to lose over $1 million dollars if San Francisco goes all the way. “Honestly, we get crushed if the...
GAMBLING・13 DAYS AGO
San Bernardino County Sun

SAN FRANCISCO — The Dodgers were victimized by a Webb gem. Buster Posey hit a 3-and-0 fastball from Walker Buehler into McCovey Cove for a two-run home run in the first inning and the Dodgers never responded, managing just five hits in eight innings against Giants starter Logan Webb and losing Game 1 of the NL Division Series, 4-0, Friday night at Oracle Park.
MLB・13 DAYS AGO

The Giants Didn’t Lose Because of a Check Swing

Wilmer Flores wasn't going to suddenly figure out Max Scherzer after hitting .091 lifetime against him.
MLB・6 DAYS AGO
Yardbarker

The San Francisco Giants won 107 games in the regular season and two more in the postseason, only to see their campaign end on a controversial call by the umpires. That’s rough. The Giants lost 2-1 to the Los Angeles Dodgers in the deciding Game 5 of their NLDS on...
MLB・7 DAYS AGO
Sportsnaut

As the 2021 season concludes, baseball fans and teams are excited for the exciting crop of MLB free agents who
NFL・2 DAYS AGO

The biggest winner of the 2021 major league season is … the 2017 Houston Astros. Settle down. I have not come to exonerate or forgive the sign stealers. I would not argue with anyone who feels the players got off easy by not facing suspension, and the bans on, say, Alex Cora and A.J. Hinch should have been longer than one year considering their one-year expulsions came in the one year the major league season was 60 regular-season games.
MLB・26 DAYS AGO
The Spun

The Chicago White Sox were eliminated from the playoffs on Tuesday after losing Game 4 of their American League Division Series, 10-1, to the Houston Astros. The White Sox, specifically manager Tony La Russa, did not go quietly into the winter, however. Rather, La Russa made it clear that he...
MLB・8 DAYS AGO
The Spun

Max Scherzer started the Wild Card game for the Los Angeles Dodgers tonight. He did not make it through the fifth inning. While Scherzer gave up just one run, Dodgers manager Dave Roberts pulled his ace with one out and two men on in the top of the fifth inning.
MLB・15 DAYS AGO

The New York Yankees flamed out of the 2021 MLB postseason after getting wrecked by the Boston Red Sox in a 6-2 American League wild-card game loss at Fenway Park on Tuesday. The Yankees crashing and burning against their fiercest rival and despite a luxurious payroll only add fuel to an offseason that’s going to have them answering plenty of questions, including whether the team’s future would still include veteran outfielder Brett Gardner — at least until the end of the 2022 MLB season.
MLB・15 DAYS AGO
USA TODAY

Verlander (elbow) is expected to receive a qualifying offer from the Astros this offseason, Chandler Rome of the Houston Chronicle reports. Verlander could potentially have an interesting decision on his hands. If healthy, he'd almost certainly receive more than the qualifying offer, which was worth $18.9 million over one year last year. He'll enter next season as a 39-year-old coming off of Tommy John surgery, so it's much less clear what his value will be on the open market. If he rejects the offer and signs elsewhere, Houston will receive draft-pick compensation.
MLB・14 DAYS AGO
FanSided

Boston Red Sox fans let Kyle Schwarber have it for letting a pop-up land on the infield, and he probably had it coming. If you let Schwarber play first base long enough, something like this was bound to happen. The Sox knew this when they acquired him from the Washington Nationals, and they sure as hell didn’t trade for him because of his defensive ability.
MLB・27 DAYS AGO
FanSided

Will the Chicago Cubs move past the World Series champion core for good this winter? Or is a reunion (or reunions) in the cards? That’s been heavily debated among fans for the past month-and-a-half or so after Jed Hoyer sold off everything not bolted down at the July 30 deadline.
MLB・28 DAYS AGO
FanSided

The Los Angeles Dodgers are fighting the San Francisco Giants for the NL West title and one of their fans is fighting security inside Dodger Stadium. Dodgers fans are dealing with some tough injury news surrounding Clayton Kershaw who had to leave Friday’s start early and his postseason availability is in doubt.
MLB・19 DAYS AGO