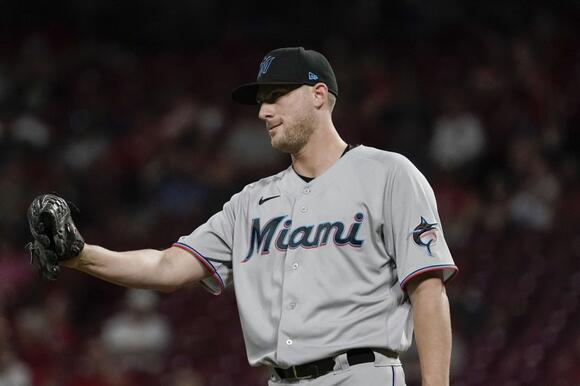 The Padres added a veteran pitcher Tuesday as they prepared to fill innings in the coming days.

Left-hander Ross Detwiler was signed and added to the roster and was said to be available out of the bullpen for Tuesday’s game against the Giants.

Detwiler, 35, had a 4.96 ERA and 1.24 WHIP in 46 games (45 1/3 innings) for the Miami Marlins before being designated for assignment on Sept. 7 and subsequently released Saturday. He has a 4.58 career ERA while pitching for eight teams.

Detwiler served as the opener in five games for the Marlins. He did not allow a run in three of those. He allowed five runs (all in the third inning) and eight (four in the first and four in the second inning) in the other two games.

The Padres bullpen had to cover 7 2/3 innings Sunday and four more Monday. Jake Arrieta, who has not gone more than five innings since May 14, started Tuesday’s game. After Joe Musgrove starts Wednesday, there are likely two games in a row the Padres will be without a member of their starting rotation.

Chris Paddack, the Padres’ scheduled starter on Thursday, was placed on the injured list Monday with elbow inflammation. The discomfort he has felt has been more in his lower triceps and is not expected to keep him out long, but his absence leaves a full game for the Padres to cover.

Blake Snell, who departed his start Sunday with adductor tightness, could also miss his scheduled start Friday in St. Louis.

James Norwood and Reiss Knehr have also joined the Padres in San Francisco as part of the taxi squad. Both have appeared in relief for the Padres this season and have been throwing in one- and two-inning stints in Triple-A.

The Padres optioned Shaun Anderson to Triple-A to make room for Detwiler.

Jake Cronenworth took batting practice Tuesday and could play by the end of the week.

Cronenworth suffered a fracture near the tip of his left ring finger when he was hit by a pitch Friday in Los Angeles.

“The strength in that finger is still pretty limited, but he’s moving forward,” Tingler said.

Cronenworth throws with his right hand, so the location of the injury was fortunate. However, he bats left-handed and the ring finger of that hand helps provide power in his grip.

Musgrove will wear No.21 on his jersey today as MLB celebrates Roberto Clemente Day.

“That will be an honor,” Musgrove said.

Musgrove was among the players around the league given the option to wear Clemente’s number because he is the team’s nominee for the Roberto Clemente Award, which is given to the player “who best represents the game … through extraordinary character, community involvement, philanthropy and positive contributions, both on and off the field.”

The league-wide winner will be announced next month.

Musgrove, who is playing his first season in his hometown after being acquired in a trade from the Pittsburgh Pirates, was chosen as the Padres’ nominee in part for his philanthropic work, primarily with the Challenged Athletes Foundation.

“I think it's probably one of the highest honors I've gotten in my entire life,” Musgrove said.

Clemente, a Hall of Famer who played 18 seasons for the Pittsburgh Pirates, was killed in a plane crash in 1973 while delivering supplies to earthquake victims in Nicaragua.

“Especially coming from Pittsburgh where I just played three years in a city where Clemente is worshipped … I got to learn a lot about the culture and the history of who he was, who he was to his country (Puerto Rico) and to the city of Pittsburgh and his impact on the game,” Musgrove said “It left its mark. So getting to learn about that stuff and then coming back to my own city and getting to receive the award here after spending three years there and really learning who he is and what that award is all about, it's extremely special.”

Closing options for the Padres in 2022

The San Diego Padres need a closer for the 2022 season. Who will that be?. Throughout the history of the Padres, the team has seemingly always possessed a great closer. From Rollie Fingers to Trevor Hoffman, the San Diego Padres’ 9th-inning seems always to be secured. In 2021, Mark Melancon...
MLB・1 DAY AGO
97.3 The Fan

Mark Loretta: "I expect the Padres to be right back in it next year"

Former Padres player Mark Loretta joined Ben & Woods on Wednesday morning! Listen here as Mark talks about the MLB playoffs, what direction he thinks the Padres should go with their managerial search, what makes a good manager, and MUCH more!
MLB・11 DAYS AGO
RealGM

The San Diego Padres looked into trading for Anthony Rizzo at this year's deadline, according to a report. It isn't known how far negotiations between the Padres and Chicago Cubs got before Rizzo was dealt to the New York Yankees. Rizzo will be a free agent shortly after the conclusion...
MLB・11 DAYS AGO
gaslampball.com

Determining the 2021 Padres MVP (other than Fernando Tatis Jr.)

The San Diego Padres had six All-Stars on their team at one point this season, so the fact that they missed the postseason and finished under .500 seemed impossible in July. However, it happened. Fernando Tatis Jr. did his job, though, as he led the league in homers (42) and earned a WAR well over six.
MLB・9 DAYS AGO

Switch-hitting catchers are special. Ones that can actually swing the bat and perform are rare. At the age of 21, Valenzuela is showing a plus bat and the ability to stick behind the plate. The Padres have plenty of young catchers gaining momentum in the minor leagues, and Valenzuela could be the most exciting. The 6-foot-0, 170 lb catcher put up a .299/.393/.429 batting line and a .821 OPS in 97 games last year in the minors. He started in Lake Elsinore and was promoted to Fort Wayne late in the year.
MLB・10 DAYS AGO
Denver Post

Denver Post sports writer Patrick Saunders with the latest installment of his Rockies Mailbag. Pose a Rockies — or MLB — related question for the Rockies Mailbag. With the Padres doing another faceplant and then firing (manager) Jayce Tingler, do you think they would ever consider hiring Bud Black away from the Rockies?
MLB・12 DAYS AGO
chatsports.com

Report: Padres' Fernando Tatis Jr. Opts Not to Have Surgery on Shoulder Injury

San Diego Padres star Fernando Tatis Jr. doesn't plan on having shoulder surgery this offseason, according to Kevin Acee of the San Diego Union-Tribune. The 22-year-old has battled persistent shoulder trouble all season. The Padres placed him on the 10-day injured list to close out July after he experienced the third partial dislocation of his left shoulder.
MLB・6 DAYS AGO
chatsports.com

Padres finalizing list of managerial candidates to interview, per report

The San Diego Padres have fired Jayce Tingler following the most disappointing season in franchise history. Now general manager A.J. Preller is tasked with hiring his third manager. Will it be a veteran manager this time around? Time will tell, but according to Bob Nightengale of USA Today on Twitter, he’s going to be interviewing plenty of former big league managers.
MLB・11 DAYS AGO

Last season, I picked the Texas Rangers as the most disappointing team of the 2020 MLB season, even though the Colorado Rockies, Washington Nationals and Philadelphia Phillies were also painfully disappointing to watch in a 60-game sample. This year, however, there is a near unanimous selection, and it belongs to...
MLB・11 DAYS AGO
MLB

SAN DIEGO -- The 2021 Minor League season was defined by major changes for the Padres. Before the year began, San Diego saw an overhaul of its farm system, as general manager A.J. Preller went on an offseason spending spree to acquire a trove of big league-caliber talent. Then, after...
MLB・5 DAYS AGO
sportsspectrum.com

Jake Cronenworth burst onto the scene in 2021 as one of the best utility players in Major League Baseball. In his first full season with the San Diego Padres, Cronenworth hit 21 home runs and drove in 71 runs on his way to earning his first All-Star Game selection. A standout two-way player at the University of Michigan, Cronenworth has found his niche in the majors by being able to play multiple positions.
MLB・5 DAYS AGO

Does Buck Showalter make sense to be next manager of Padres?

The San Diego Padres need a new manager- is Buck Sholwalter the right man for the job?. Both of A.J. Preller’s managerial hires as general manager of the San Diego Padres were failures. Unfortunately, those two hires were also of two inexperienced managers, which followed a very common trend for the franchise.
MLB・4 DAYS AGO
eastvillagetimes.com

A trade with White Sox for Kimbrel makes sense for Padres

In searching for a closer for the 2022 season, the San Diego Padres may want to consider Craig Kimbrel of the Chicago White Sox. The San Diego Padres need a closer next year. At this point, there is little on the roster or in the free-agent marketplace that looks appealing for a ball club with championship ambitions. However, the Padres want to win a World Series title and will need depth in the bullpen to accomplish that task. Therefore, they need to make some moves.
MLB・4 DAYS AGO
MLB Trade Rumors

Turnover continues in the Philadelphia and San Diego dugouts, as the Phillies are set to hire Bobby Dickerson away from the Padres to serve as their infield coach reports USA Today’s Bob Nightengale. Dickerson pulled double duty during the 2021 season for the Padres, serving as the team’s official bench coach and third base coach following the front-office promotion of previous third base coach Glenn Hoffman.
MLB・2 DAYS AGO
MLB Trade Rumors

The Padres “are locking in on” Cleveland assistant pitching coach Ruben Niebla as their next pitching coach, ESPN.com’s Buster Olney tweets. The hiring isn’t yet official, although Kevin Acee of The San Diego Union-Tribune reports (via Twitter) that Niebla “is considered all but a done deal” to change teams. Ben...
MLB・12 HOURS AGO
northwestgeorgianews.com

CLEVELAND, Ohio — The Guardians have already watched the Chicago Cubs hire Carter Hawkins to be their General Manager. Now the San Diego Padres are close to hiring Ruben Niebla as their pitching coach. Niebla just finished his 21st year with Cleveland and his second as the Guardians’ assistant pitching...
MLB・11 HOURS AGO
FanSided

The Los Angeles Dodgers’ 2021 season ended with a thud. They had the highest of expectations coming into this year and, somehow, so many things went wrong. From Clayton Kershaw and Max Muncy going down right before the postseason to Trevor Bauer and Dustin May missing more than half the year to the San Francisco Giants coming out of nowhere to win 107 games, the Dodgers did their best to keep pace, but it wasn’t enough.
MLB・23 HOURS AGO
papercitymag.com

CHICAGO — Jose Altuve does not need a champagne bath. Or a big clubhouse party Right now, the man who powers baseball’s most underrated modern dynasty just wants a hug from his wife, So that is what Altuve looks for when he gets back onto the field after a spirited, but brief and anything but over-the-top Astros clubhouse celebration.
MLB・12 DAYS AGO