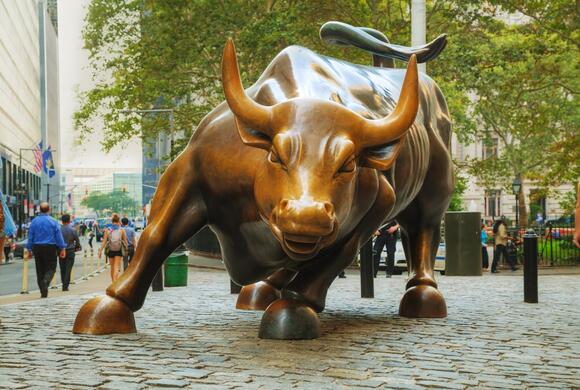 For more crisp and insightful business and economic news, subscribe to The Daily Upside newsletter. It's completely free and we guarantee you'll learn something new every day.

Analysts at several of Wall Street's top banks are worried about the U.S. stock market — six major institutions sent out warnings last week that a storm is on the way.

But new research says Wall Street's fear is actually a good thing and that, while the banks freak out, investors can relax knowing history is on their side.

Last week, investor notes from Deutsche Bank, Goldman Sachs, Morgan Stanley, Citigroup and Bank of America expressed concerns over company valuations at unprecedented extremes, a seven month long stock rally, softening economic data, and the Federal Reserve's plan to taper stimulus. Taken together, it all looks like a game of Jenga that's about to be over.

But analysts at Sundial Capital Research crunched the numbers on how the market has performed when fear on Wall Street peaked alongside stock values. There's surprisingly good news:

"In my 40 years on the Street, we have never seen six Tier 1 banks collectively call for a large decline when the market was within 1% of its all-time highs," wrote Bensignor Investment CEO Rick Bensignor, in a note Monday. "It's usually quite the opposite. So, I don't think this leads to a 500-plus point decline in the SPX. 5% — sure; anytime. But 15%: I think it's highly unlikely."

This Low-Priced Marijuana Stock Could Make You Rich

The legal marijuana industry has been a tough place for investors to make money. Sundial Growers has been among the worst-performing cannabis stocks over the prior two years. The Canadian pot company's fortunes may be about to change, however. Low-priced equities (usually defined as stocks with share prices under $5)...
STOCKS・20 HOURS AGO
The Motley Fool

Want to Get Richer? Buy These Top Stocks and Wait 10 Years

Time in the market is one of the most important variables in determining your total returns. Riskified uses artificial intelligence to help merchants combat fraud. SoFi offers a comprehensive suite of mobile-first financial services. Here's one of my favorite pieces of investing wisdom: It's time in the market, not timing...
STOCKS・23 HOURS AGO
24/7 Wall St.

A big miss on revenue estimates is hammering shares of one stock that meme stock investors love to hate.
STOCKS・21 HOURS AGO

AbbVie is cheap because of concerns about Humira, but it has several other growth drivers. Enterprise Products Partners is a midstream energy leader with solid prospects and a high dividend yield. Viatris trades well below its book value but Wall Street thinks the stock could soar 46%. Most stocks are...
STOCKS・1 DAY AGO
24/7 Wall St.

These five top stocks have among the highest median returns during periods of stagflation. They are very good ideas for nervous investors, as they should be able to ride out periods of volatility and the inevitable large sell-off.
STOCKS・23 HOURS AGO
MarketWatch

Europe stocks off highs as Deutsche Bank slides after results

European stocks drifted lower on Wednesday as investors absorbed a heavy load of earnings reports, including from financials such as Deutsche Bank and Banco Santander.
STOCKS・20 HOURS AGO
MarketWatch

Long-dated Treasury yields fell to levels not seen since July, while the 2-year yield reached another 52-week high, flattening the Treasury curve.
BUSINESS・15 HOURS AGO

The fact that the Federal Reserve is contemplating shifting its easy money policies as early as mid-November shows that inflation isn’t as transitory as thought a couple months ago. And that’s great news for energy stocks. When inflation rises, the dollar weakens as interest rates rise. That means it takes...
STOCKS・22 HOURS AGO
Investor's Business Daily

Big investors' pain could soon be your gain. Some giant funds are all but forced to sell some S&P 500 stocks now for tax purposes that are primed for big jumps, says Bank of America. All told, 13 S&P 500 stocks, such as health care Incyte (INCY), communications firm T-Mobile...
STOCKS・23 HOURS AGO
The Motley Fool

Discover Financial has recovered impressively from its pandemic lows, but still trades at a single-digit earnings multiple. A post-earnings sell-off seems overdone, opening up a compelling entry point for investors. Shares of Discover Financial Services (NYSE:DFS) sold off after the company's recent earnings report, but it's confusing as to why....
MARKETS・1 DAY AGO
24/7 Wall St.

Cboe is planning to launch the Nanos S&P 500 micro-options contracts in the first quarter of 2022.
RETAIL・18 HOURS AGO
The Motley Fool

2 Underrated Cannabis Stocks That Could Be Great Buys

Fire & Flower and Verano Holdings aren't nearly as popular as their peers. Both companies are formidable investments and possess attractive growth opportunities. In Verano's case, investors have started to take more notice of the stock -- likely due to the company's impressive results. If you're a cannabis investor, then...
STOCKS・32 MINUTES AGO
MarketWatch

The Dow and S&P 500 closed lower Wednesday, ending a string of gains for the equity benchmarks that have been mostly rising to all-time highs on the back of upbeat quarterly results from American corporations. The Dow Jones Industrial Average closed down 266 points, or 0.7%, at about 35,491, the S&P 500 index closed 0.5% lower at 4,552. The Nasdaq Composite Index finished the session nearly unchanged at 15,236, as a retreat in yields for the 10-year Treasury note and the 30-year Treasury bond hit lows not seen since July 19, according to Dow Jones...
STOCKS・14 HOURS AGO
24/7 Wall St.

The Dow and S&P 500 close lower Wednesday, pulling back from records, as investors sift through a heavy slate of corporate results and monitor global central bank policy.
STOCKS・14 HOURS AGO
The Motley Fool

For more crisp and insightful business and economic news, subscribe to The Daily Upside newsletter. It's completely free and we guarantee you'll learn something new every day. It looks like investors love a fashion-tech unicorn even more than customers love being able to rent Ralph Lauren wrap dresses and Tori Burch handbags for $99 per month.
BUSINESS・10 HOURS AGO
The Independent

Asian shares pull back, chilled by decline on Wall Street

Asian shares fell Thursday after a retreat on Wall Street as banks and health care companies pulled the S&P 500 and the Dow Jones Industrial Average back from their latest record highs. Shares fell in most major regional markets and oil prices also declined.In Seoul the Kospi edged 0.2% higher, to 3,030.56, after Samsung Electronics reported its highest quarterly profit in three years thanks to continued robust demand for its computer memory chips. Samsung’s dual strength in parts and finished products has allowed it to flourish during the pandemic as millions of people were forced to work at home....
STOCKS・5 HOURS AGO
24/7 Wall St.