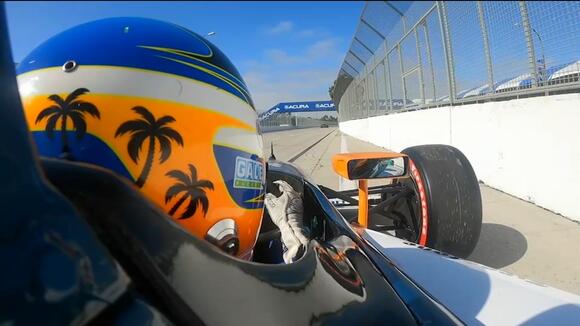 The cars are ready to go and drivers are excited in anticipation of the big September race weekend, taking place from the 24th to the 26th. After a year off because of the pandemic, Grand Prix officials are expecting a big turn out this year. They say they're taking plenty of safety precautions. "We are going to be mandating certain protocols here with regard to the attendees. They're going to be masked. They're going to have to show proof of vaccination or have a very recent negative covid test,' said Jim Michaelian, CEO and President of the Grand Prix Association of Long Beach. Essentially, the race course is ready to go, but they have a few more finishing touches before the big weekend. There will be six different racing events and for some drivers, it'll be their first time on the track. Race car driver Mario Farnbacher said he's super excited. "My brother has driven here in the past and family history is here. So no really, I mean I've heard a lot about the Long Beach Grand Prix and I'm really looking forward to that race," he said. "The cumulative number of drivers over those six races will be somewhere in the area of about 150 to 175. The main event which is the IndyCar series will have 28 drivers," added Michaelian. For driver Matt Brabham, it's all about carrying on his family's legacy. "My dad raced here. My grandfather was a 3-time Formula1 world champion and my dad won Le Mans so I'm part of the Brabham family," he said. "It's so good to be back at the Long Beach Grand Prix because the race itself has so much history so I love it," Brabham added. Ticket and race details can be found on the Grand Prix website, gplb.com. Follow Jaysha on social media: Facebook.com/ABC7Jaysha Twitter.com/abc7jaysha Instagram.com/abc7jaysha

(CNN) — An assistant director handed Alec Baldwin a prop firearm and yelled "cold gun" before the actor fired and killed cinematographer Halyna Hutchins and injured director Joel Souza, according to a court document. The "cold gun" remark was meant to indicate that the weapon did not have live rounds,...
CELEBRITIES・11 HOURS AGO
The Hill

Supreme Court Justice Sonya Sotomayor called the high court’s refusal to once again block Texas’s six-week abortion law “catastrophic.”. The court agreed to review Senate Bill 8 on an expedited basis in response to legal challenges from the Justice Department and abortion providers on Nov. 1. However, the court did not halt enforcement of the law.
TEXAS STATE・6 HOURS AGO
CBS News

CDC: More Americans getting COVID booster shot than those who remain unvaccinated

According to new data from the Centers for Disease Control and Prevention, people who are already fully vaccinated are showing up to get their COVID booster shot in greater numbers than those not yet vaccinated. This comes after the FDA on Wednesday granted emergency use authorization to vaccine booster shots from Moderna and Johnson & Johnson, clearing the way for millions to be eligible for extra protection against the coronavirus. Elise Preston has the latest.
PUBLIC HEALTH・6 HOURS AGO
Reuters

NEW YORK, Oct 21 (Reuters) - The Pfizer (PFE.N)/BioNTech COVID-19 vaccine showed 90.7% efficacy against the coronavirus in a clinical trial of children 5 to 11 years old, the U.S. drugmaker said on Friday. Sixteen children in the trial who had received a placebo got COVID-19, compared with 3 who...
MEDICAL & BIOTECH・1 DAY AGO

Who was Halyna Hutchins? Tributes paid to director of photography killed by prop gun

(CNN) — The film industry has been left shocked and in mourning after cinematographer Halyna Hutchins was killed on set when actor and producer Alec Baldwin discharged a prop firearm. Hutchins, who was 42, was director of photography for Baldwin's latest movie, "Rust," a Western which was being filmed in...
PUBLIC SAFETY・1 DAY AGO
ABC News

The contaminated spray was sold at about 55 Walmart stores.
FOOD SAFETY・18 HOURS AGO
ABC News

The manhunt for Brian Laundrie is over. But several big questions remain

(CNN) — The discovery of Brian Laundrie's remains this week ends a manhunt that had gripped the country for weeks as investigators searched a Florida nature reserve for the 23-year-old, who returned home last month from a road trip without his fiancée, Gabby Petito. Petito spent the summer traveling the...
NORTH PORT, FL・7 HOURS AGO

The United States announced on Friday that an airstrike killed a senior al Qaeda leader in Syria. “A U.S. airstrike today in northwest Syria killed senior al-Qaeda leader Abdul Hamid al-Matar. We have no indications of civilian casualties as a result of the strike, which was conducted using an MQ-9 aircraft,” Army Maj. John Rigsbee, a spokesperson for the U.S. Central Command, said in a statement.
MILITARY・15 HOURS AGO