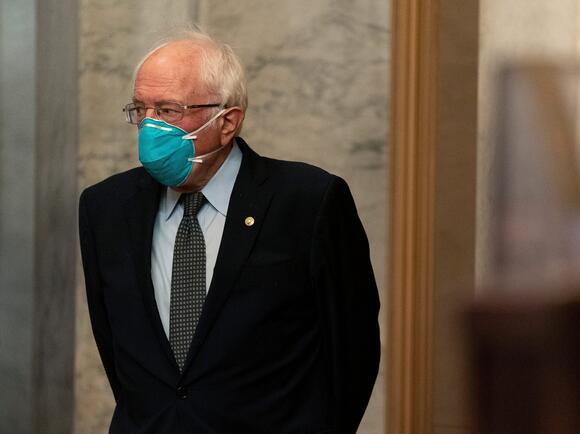 Sen. Bernie Sanders of Vermont on Tuesday said Senate Democrats were considering $1,000 vouchers for seniors to access expanded Medicare benefits that could form a major part of a $3.5 trillion social spending plan they want to pass this month. He said it would serve as a brief stop-gap measure while the programs are implemented.

"In terms of the voucher, what we want to do is make sure that people understand the significance," the Vermont independent told Insider. "So as a bridge, I think what we're looking at is here's $1,000 right away, use that to go to a dentist if you cannot afford to go. That's very temporary, but maybe a bridge for a year."

Senate Democrats are seeking to expand Medicare so it covers dental, vision, and hearing benefits in their party-line social spending package. Widening the reach of the federal health insurance program is a top priority for Sanders as chair of the Senate Budget Committee and it has backing from Senate Majority Leader Chuck Schumer.

House Democrats introduced legislation for Medicare to gradually initiate vision coverage next year, hearing in 2023, with dental covered in 2028. But Sanders has said he favors a faster timeline for dental coverage.

The measure emphasizes the challenges that Democrats face as they attempt to provide tangible benefits to Americans in a social spending package that's still taking shape - for seniors in particular ahead of next year's midterms. Americans over age 65 generally vote at higher rates, making seniors a key voting bloc during presidential elections and more so in midterm races.

Sen. Ron Wyden of Oregon, chair of the Senate Finance Committee, told Insider he'd been discussing the idea with Sanders. "I'm talking with Senator Sanders about the best way to get this up and running efficiently as quickly as possible," he said.

The Oregon Democrat drew a parallel with the Affordable Care Act a decade ago - President Barack Obama's signature health law - saying the four-year "delay" setting it up after it was made law contributed to an "understandable skepticism people have about government."

Other Senate Democrats also want to implement the programs sooner rather than later. "I think we should try to get it stood up as fast as we could," Sen. Bob Casey of Pennsylvania told Insider. "I'm not saying we could do it in a matter of months, but I think you can do it a lot faster than a couple of years."

But experts say it could take years for Medicare to design and implement new programs. Medicare was last expanded in 2003 under President George W. Bush to cover prescription drugs, and it started providing coverage three years later.

For dentists, who largely don't form part of federal health programs, the process would include setting reimbursement rates and signing up enough dental providers to cover tens of millions of Americans. Tricia Neuman, executive director of Medicare policy at the Kaiser Family Foundation, recently told Insider it could take years for the federal government to "successfully" implement a new dental benefit.

People on retirement paid their whole working life on medicaid and medicare in social security. They should not have to pay for medicare after retiring. Illegals get everything free

Wow how generous. How much do illegal ailens get when they cross illegally into the congress. How much are the refugees getting from Afghanistan? It seems nice but it’s not nearly enough.

I had a dental procedure performed yesterday and felt blessed I had insurance and good dentist . Nothing makes some one feel old quicker than to lose your teeth. I would know not how the government would pay for Medicare dental insurance . However one thing that might people feel better about entitlement programs is to staunch the flow of illegal immigrants , Taxpayer citizens should not be forced absorb of their upkeep or education even they not currently eligible for Obamacare .

Democrats are trying to circumvent Sinema in the social spending plan. One tax alternative would pursue massive wealth gains by the rich in the stock market.
CONGRESS & COURTS・23 HOURS AGO
Mother Jones

Fight disinformation. Get a daily recap of the facts that matter. Sign up for the free Mother Jones newsletter. In recent days, Sen. Joe Manchin (D-W.Va.) has told associates that he is considering leaving the Democratic Party if President Joe Biden and Democrats on Capitol Hill do not agree to his demand to cut the size of the social infrastructure bill from $3.5 trillion to $1.75 trillion, according to people who have heard Manchin discuss this. Manchin has said that if this were to happen, he would declare himself an “American Independent.” And he has devised a detailed exit strategy for his departure.
CONGRESS & COURTS・1 DAY AGO
Axios

Scoop: “How about zero?” Manchin, Sanders get heated behind closed doors

Sens. Joe Manchin (D-W.Va.) and Bernie Sanders (I-Vt.) squabbled behind closed doors Wednesday, with Manchin using a raised-fist goose egg to tell his colleague he can live without any of President Biden's social spending plan, Axios has learned. Why it matters: The disagreement, recounted to Axios by two senators in...
CONGRESS & COURTS・1 DAY AGO
Washington Post

Why Democrats should prepare for years of headaches

If it becomes law, the Build Back Better bill will be a triumph, affecting millions of Americans’ lives in profoundly beneficial ways. It will also be a complete mess. And as Democrats craft compromises to arrive at a final version that they can all agree to, it’s getting more and more complex. This is a symptom of the entire American system, but especially of how Democrats go about policymaking. They have become, to their own detriment, the party of kludgeocracy.
U.S. POLITICS・3 HOURS AGO

Democrats are scrounging for new ways to pay for Biden's economic agenda, as the Arizona senator moves against tax increases on the wealthy.
PRESIDENTIAL ELECTION・1 DAY AGO
Reuters

WASHINGTON (Reuters) - U.S. Senator Joe Manchin, a centrist and a stumbling block to Democratic President Joe Biden’s ambitious social agenda, acknowledged on Thursday having discussed leaving the party if his Democratic colleagues considered his stance “an embarrassment.”. A day after dismissing as “bullshit” a Mother Jones report that he...
CONGRESS & COURTS・1 DAY AGO
Business Insider

Biden said that issues like voting rights and ensuring the government pays its debts were too important to be held hostage by the Republicans.
BALTIMORE, MD・9 HOURS AGO
WashingtonExaminer

Upon her return to Capitol Hill from a meeting at the White House on Friday, House Speaker Nancy Pelosi told reporters that a deal was within reach on congressional Democrats’ sweeping social spending package.
CONGRESS & COURTS・5 HOURS AGO

TEXAS, USA — Sen. Ted Cruz introduced legislation Tuesday to the U.S. Senate that would establish new ports of entry across the U.S. in response to the “man-made crisis on the South Texas border.”. The “Stop the SURGE Act” would also require migrants attempting to cross the border in Texas,...
TEXAS STATE・2 DAYS AGO
Reuters

WASHINGTON, Oct 21 (Reuters) - U.S. Senator Joe Manchin said on Thursday that Democrats in Congress are not going to reach an agreement "anytime soon" on the broad outlines of President Joe Biden's ambitious expansion of social programs. The warning from the key centrist lawmaker indicated that Democrats are still...
CONGRESS & COURTS・21 HOURS AGO
Rolling Stone

UPDATE: Mitch McConnell and Senate Republicans on Wednesday blocked the Freedom to Vote Act from advancing, as expected. The vote fell along party lines, with all 50 Republicans upholding a filibuster to stop the measure, which is aimed at safeguarding the right to vote. Original story below. *** WASHINGTON — It’s not often the leader of the United States Senate holds a vote knowing it will fail. It’s even less often that the Senate leader calls a doomed vote for one of the most important bills in his party’s legislative agenda. Majority Leader Chuck Schumer (D-N.Y.) is about to do just that. The Senate will...
CONGRESS & COURTS・2 DAYS AGO
WWD

Bernie Sanders’ Head – and Those Mittens – Are Still Bobbing Along

Click here to read the full article. It became the viral moment during President Joe Biden’s inauguration in January: Sen. Bernie Sanders (D., Vt.) watching the swearing-in wrapped in a Burton winter coat and sustainable mittens from a local teacher named Jen Ellis. The outfit drew immediate reaction on social media, sparking thousands of memes of the politician Photoshopped into everything from the surface of the moon and the Lincoln Memorial to a cast photo of “The Golden Girls.” His campaign created a crewneck sweater featuring the image to raise money for Meals on Wheels in Vermont, and the National...
POLITICS・16 HOURS AGO

"It's a reach, because of Mr. Manchin," Biden said. He added Democrats were nearing a potential deal on providing $800 dental benefit vouchers.
U.S. POLITICS・19 HOURS AGO
madison

Bernie Sanders is not going to let Democrats downsize their vision for the future without a fight. While the Senate Budget Committee chair has been willing to negotiate on the $3.5 trillion budget reconciliation bill he has championed, Sanders isn’t prepared to bend so far to the demands of a handful of corporate-aligned Democrats that promises outlined in the party’s 2020 platform are abandoned in 2021.
CONGRESS & COURTS・2 DAYS AGO
Los Angeles Times

WASHINGTON — U.S. Senate Republicans blocked the advance of voting rights legislation Wednesday, the second time this year—thwarting again Democrats’ attempts to pass federal protections for voters amid a slew of new state elections laws.  “When we are faced with a coordinated effort across our country to limit the freedom to vote, we must stand […] The post U.S. Senate Republicans again block debate on voting rights legislation appeared first on New Jersey Monitor.
PRESIDENTIAL ELECTION・1 DAY AGO

The Wall Street Journal wrote Tuesday that President Biden was making another attempt to salvage his stalled legislative agenda by meeting separately with progressive and moderate Democrats. The next sentence was more telling: The moderates were Sens. Kyrsten Sinema, D-Ariz., and Joe Manchin, D-W.Va. The progressives were too numerous to...
CONGRESS & COURTS・2 DAYS AGO
USA TODAY

Biden spoke repeatedly about obstacles posed by Sens. Manchin and Sinema to key pieces of his economic agenda.
PRESIDENTIAL ELECTION・1 DAY AGO
MarketWatch

As the party tries to reach agreement, here are key proposed categories for the spending.
CONGRESS & COURTS・1 DAY AGO
The Guardian

House to aim to vote on infrastructure and reconciliation bills next week, Hoyer says – live