Last month, CD Projekt Red shipped update 1.3 for Cyberpunk 2077 . The update delivered a ton of changes with a set of patch notes that felt neverending, but it seems there were some bugs and other issues that evaded CD Projekt Red. Some of those lingering issues are being quashed in update 1.31, which is arriving today for console and PC. 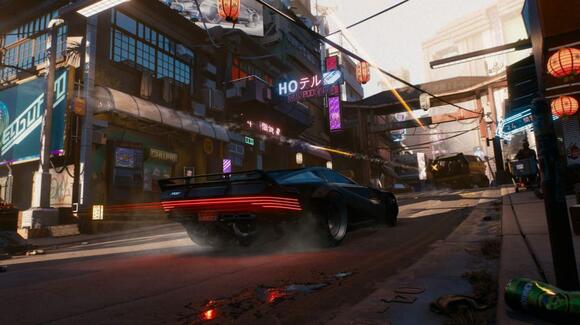 This time around, the patch notes are notably shorter than they were for update 1.3. Instead of a set of seemingly endless patch notes that list hundreds upon hundreds of fixes, the documentation for Cyberpunk 2077 ‘s version 1.31 update is quite a bit shorter. There don’t appear to be any massive changes or additions with this update, but there are some fixes worth talking about.

For instance, CD Projekt Red has “fixed an issue where weapon reload speed perks slowed down reload time,” which sounds like a frustrating bug to face in-game. In addition, the stealth detection of enemies you encounter is now adjusted based on game difficulty too, so if you’re playing on harder difficulties, expect to come up against enemies who can detect you easier.

In this update, CD Projekt Red has fixed a few issues related to quests and the open world. Specifically, the quests that have been changed and updated include Disasterpiece, These Boots Are Made for Walkin’, Beat on the Brat, With a Little Help from My Friends, and The Nomad, so if you were having problems with any of those, be sure to check the full patch notes for more on their associated fixes.

Add to that several visual, UI, and miscellaneous fixes, and we’ve got an update on our hands. CD Projekt Red also says that it has optimized GPU memory in the PlayStation version, so hopefully, that helps the game run smoother. You can check out the full patch notes over on the Cyberpunk 2077 website, but otherwise, version 1.31 is live and ready for download on PC, consoles, and Stadia now.

Cyberpunk 2077 update 1.31 now live: Here’s what it changes is written by Eric Abent and originally posted on SlashGear .

The Minecraft Dungeons team has taken the wraps off Spookier Fall, this year’s follow-up to last year’s Spooky Fall event. The limited-time event offers new Halloween-themed spookiness, related challenges, and rewards. The company has released a launch trailer to go alongside the new Spookier Fall event, offering a teaser for those who haven’t yet purchased Minecraft Dungeons.
VIDEO GAMES・3 DAYS AGO
SlashGear

Mojang and Secretlab have teamed up to launch an official Minecraft Edition gaming chair. The TITAN Evo 2022 Minecraft Edition chair is, as you can see from the launch images, styled after the game’s Creeper character. The company is offering the chair in various size options, as well as some accessories like a headrest and swappable armrests.
VIDEO GAMES・2 DAYS AGO
SlashGear

Those looking forward to Elden Ring have been waiting a long time for the game to come out, and today that wait got a little longer. From Software announced today that Elden Ring has been delayed. While it’s always sad to hear of a delay, the good news is that this one isn’t very long, so gamers who can’t wait for Elden Ring won’t have to wait too much longer.
VIDEO GAMES・1 DAY AGO
Twinfinite

Here are all of the changes to Verdansk in Call of Duty: Warzone’s season 6 update

Call of Duty: Warzone’s Verdansk has gone through some minor changes to tweak the meta throughout its lifespan. But its biggest update is coming in Black Ops Cold War’s season six update. After the events that unfolded in the cutscene below, Verdansk has seen a seismic shift that’s changed the...
VIDEO GAMES・13 DAYS AGO
mp1st.com

Overseer Games have launched a new update for their survival city builder, Patron. The October update adds some new buildings and mechanics to the game. Some of these include the new Caldera map, and deer as a new wild animal. Quartz is a new minable resource that can be turned into glass, while the update also introduces the paper mill and book binder buildings, and universities to help younger citizens advance classes faster. You can read the full list of changes and additions here.
VIDEO GAMES・7 DAYS AGO
PCGamesN

Minecraft’s 1.19 update is The Wild – here’s what’s confirmed so far

Minecraft Live 2021 has come and gone, but not without a whole lot of detail about what to expect from Minecraft‘s next update. Well, Minecraft’s next next update. The 1.18 release date with many of the Caves and Cliffs part two features is still coming this year, but now Minecraft 1.19 has been confirmed as The Wild update, launching in 2022.
VIDEO GAMES・2 DAYS AGO

What is the release date of Elden Ring?

Few games have been anticipated the way that Elden Ring has. The next title from one of the video games industry’s true auteurs, Elden Ring, promises to be an evolution of everything that people have grown to love and expect from FromSoftware and Hidetaka Miyazaki, the mind that has brought us Demon’s Souls, Dark Souls, Bloodborne, and Sekiro.
VIDEO GAMES・1 DAY AGO
The Independent

Super Smash Bros Ultimate: How to get Sora and everything to know about the final character

Nintendo’s best-selling multiplayer fighting game Super Smash Bros Ultimate is set to add its final character.The popular Switch game, first released in 2018, has augmented its character roster with a number of new fighters over the past few years.Now, the game is set to add its final character: Sora, the lead character of Kingdom Hearts.Here’s everything you need to know about when Sora is arriving on Smash and how to acquire him.In order to add Sora to their roster, players must have purchased the Fighters Pass Vol 2.The pass affords access to five other previously released charcters: Min Min...
VIDEO GAMES・1 DAY AGO
SlashGear

Pokemon GO Research right now includes a significant amount of Ghost Type Pokemon requirements. If you plan on completing the research in a timely fashion, you’ll need to start tossing Pokeballs at tens of Ghost Type Pokemon, and keep it up through the end of the month. But wait, you might be saying – how am I supposed to find 9 different species?
VIDEO GAMES・1 DAY AGO
SlashGear

Outriders is finally coming to Xbox Game Pass for PC

Earlier this year, we saw the Square Enix RPG shooter Outriders get a surprise day-one release on Xbox Game Pass. Unfortunately, it wasn’t a day-one release for all versions of Game Pass – only the console and cloud versions, leaving PC subscribers to buy a copy outright if they wanted to play on day one. Now, months later, Square Enix and Microsoft are rectifying that oversight, announcing that Outriders is finally coming to Xbox Game Pass for PC.
VIDEO GAMES・1 DAY AGO
BigCountryHomepage

BestReviews is reader-supported and may earn an affiliate commission. Details. It’s a little bit more than just a display change The Nintendo Switch, a handheld gaming console first launched in 2017 and quickly became one of the fastest-selling devices. As of June 2021, almost 90 million units had been sold. This includes the 16 million units […]
VIDEO GAMES・1 DAY AGO
SlashGear

Follow live: PS5 stock UK – tracking live restock updates from all the major retailersThe PS5 has been out for nearly a year now and gamers are still struggling to get their hands on Sony’s newest console. Stock issues have plagued the PS5 ever since it launched last year, and the restock kerfuffle is still going on today.The sad tale began in November, when excited gamers tore open PS5 parcels that they had pre-ordered, only to find them replaced with cat food, a George Foreman grill and a bag of grain. Whenever more PS5s were made available, they were snapped up almost immediately,...
VIDEO GAMES・1 DAY AGO
SlashGear

For nearly three years, the Nintendo Switch has reigned supreme when it comes to hardware sales in the United States. As the previous generation wound down and the new generation began ramping up, the Nintendo Switch found itself on top of NPD’s sale charts month after month. But, in September, that all changed when the Switch was finally unseated by a new top-seller: The PlayStation 5.
VIDEO GAMES・1 DAY AGO
SlashGear

It’s a little hard to believe, but with the latest update for Super Smash Bros. Ultimate, Sora from Kingdom Hearts is officially in the game. One of the most requested characters of all time, Sora seemed like a pipe dream to many, but Nintendo navigated what we imagine was a licensing nightmare to make it happen. Update 13.0.0 adds Sora to the game, but beyond his introduction, the update also buffs several low-tier characters.
VIDEO GAMES・16 HOURS AGO
SlashGear

Today we’re taking another look at the newest member of the Minecraft mob universe: Allay! This is the winner of the Minecraft Live 2021 mob vote that also included the glare and copper golem. We MIGHT see those other mobs added to the game at some other point in the game – but there is no guarantee. What we ARE guaranteed is allay, the most helpful mob of all!
VIDEO GAMES・1 DAY AGO
CNET

It's been a quiet week for PS5 restocks so far. Last week saw multiple retailers having the hard-to-find console available, but this week is a different story. We're still looking for a PS5 restock from Walmart and Amazon, which haven't had consoles in some time. If you'd rather not refresh...
VIDEO GAMES・12 DAYS AGO