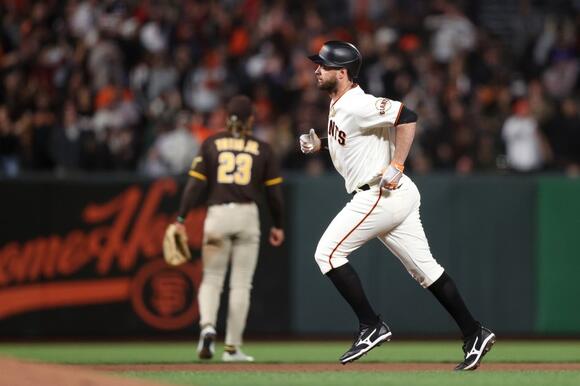 Five times, the Padres have halted losing streaks at four games. This time, their playoff hopes hang in the balance as they carry a season-worst four-game winning streak into Tuesday’s 6:45 p.m. start at Oracle Park.

After all, Monday’s 9-1 loss to the Giants dropped the Padres a half-game behind the Cincinnati Reds in the race for the NL’s second wild-card spot, tied with the Cardinals (74-69) and just 2½ games up on the Phillies.

Here’s a look at the Padres’ previous four-game losing streaks:

They’ve won at least three in a row just three times since, but Padres manager Jayce Tingler believes his team can rebound to the levels it had twice earlier this season.

Mostly because he needs to believe that.

“We’ve had two really good hot runs,” Tingler said. “ … A lot of belief in this team through the offseason, spring training, regular season and now and I feel like we’ve got one more hot stretch in us, and I feel if we do that we got a chance to take that momentum into the playoffs.

“Our goals from spring training are still there. We want to get into the playoffs and we want to win a World Series. It’s out in front of us.”

To stop this skid, the Padres are sticking with Trent Grisham in the leadoff spot for the sixth straight game and using Fernando Tatis Jr. and Manny Machado in the two/three holes for the first time since Sept. 5.

Eric Hosmer will follow with his 34 th start in the clean-up spot, followed by Austin Nola , Adam Frazier and Wil Myers in right field.

Jurickson Profar will start in left field for the first time since Aug. 31 in place of the slumping Tommy Pham .

Not that Profar is hitting much either.

Here is the Giants' lineup:

Because of two off-days last week, Arrieta hasn’t pitched since Sept. 3. He struck out three and allowed three runs on three hits and a walk in five innings in that start, his first since going on the injured list with a hamstring strain.

Here is how current Giants have fared in their careers against Arrieta:

Here is how DeSclafani has fared in his career against current Padres:

San Diego Padres infielder Jurickson Profar is in the lineup Saturday in the team's game against the San Francisco Giants. Profar is getting the nod in right field while batting fifth in the order against Giants starter Kevin Gausman. Our models project Profar for 0.9 hits, 0.4 runs, 0.3 RBI...
MLB・13 DAYS AGO
NBC San Diego

Mookie Betts and Corey Seager homered back-to-back in the first inning, Justin Turner and AJ Pollock did the same in the fourth, and Los Angeles completed a three-game sweep of the San Diego Padres with an 8-3 victory Thursday night. The defending World Series champions remained two games behind NL...
MLB・14 DAYS AGO
eastvillagetimes.com

Several questions are surrounding the San Diego Padres this winter. General manager A.J. Preller will have his hands full as he attempts to restructure the roster into a playoff-caliber team. There are also questions about management and the coaching staff and who should be responsible for cultivating the talent at the major league level.
MLB・10 DAYS AGO
East Bay Times

The San Diego Padres looked into trading for Anthony Rizzo at this year's deadline, according to a report. It isn't known how far negotiations between the Padres and Chicago Cubs got before Rizzo was dealt to the New York Yankees. Rizzo will be a free agent shortly after the conclusion...
MLB・1 DAY AGO
ClutchPoints

The Los Angeles Dodgers vs. San Francisco Giants NLDS had a rather unceremonious conclusion. While the Dodgers seemed to have the game in hand, as San Francisco’s Wilmer Flores was down to his last strike against Max Scherzer in the bottom of the ninth, it was an umpire’s check swing call that ultimately ended the game, and in effect the season for the Giants.
MLB・7 HOURS AGO
Larry Brown Sports

The reaction San Francisco Giants first base coach Antoan Richardson had to first base umpire Gabe Morales’ call on a check swing went viral on Thursday night. The Giants lost 2-1 to the Los Angeles Dodgers in Game 5 of the NLDS at Oracle Par in San Francisco. The game ended after Morales said that Wilmer Flores went around on a check swing on a 0-2 pitch from Max Scherzer with two outs (see it here). Most people recognized right away that Morales blew the call.
MLB・14 HOURS AGO
The Spun

Washington Nationals catcher Alex Avila announced his retirement on Sunday, pending the completion of the 2021 season. Avila, the son of Detroit Tigers general manager Al Avila, was a fifth-round pick of the Tigers in 2008. He made his debut with the club the following year and spent seven seasons in the Motor City.
MLB・26 DAYS AGO

In a stunning move made eight days after the conclusion of their season, the St. Louis Cardinals dismissed manager Mike Shildt on Thursday, chairman Bill DeWitt Jr. and President of Baseball Operations John Mozeliak announced. “We have determined that we have a philosophical difference in the direction that our Major...
MLB・23 HOURS AGO
The Spun

The Chicago White Sox acquired reliever Craig Kimbrel from the Chicago Cubs at the trade deadline anticipating he would help fortify their bullpen for a World Series run. Instead, Kimbrel was a disaster on the South Side. A closer with the Cubs and throughout his big league career, the White Sox tried to use Kimbrel as a setup man.
MLB・1 DAY AGO
Larry Brown Sports

Baseball fans are about to see more of Joc Pederson over the next week as his Atlanta Braves get set to face the Milwaukee Brewers in the NLDS. There is something fans should know about him: he just started wearing a pearl necklace during games. Yes, beginning last week, Pederson...
MLB・9 DAYS AGO
NJ.com

Brian Cashman has been loyal to Aaron Boone, but what if the current Yankees manager isn’t the former player that the Yankees executive most wants running the show in the dugout?. As the Yankees get set to finalize a power structure for 2022, Boone will likely be back. But things...
MLB・4 DAYS AGO

3 Brewers who won’t be back after NLDS disappointment

The Milwaukee Brewers’ 2021 season has come to an end after falling to the Atlanta Braves in four games in the NLDS. Here are three players who likely won’t be back next season. The Milwaukee Brewers‘ plans to make it to the World Series for the first time since 1982...
MLB・2 DAYS AGO
USA TODAY Sports Media Group

The Yankees, Red Sox and Blue Jays are in a dead heat for the American League wild card spots. And if Boston ends up missing out on a postseason appearance, it’ll be tough to overlook the horrible night that umpire Joe West had on Sunday. He very well may have...
MLB・18 DAYS AGO
Jacksonville Journal Courier

The firing of Cardinals Manager Mike Shildt came as a huge surprise to me. In his three full seasons as the team's skipper, Shildt took the Cardinals to the postseason each year. In 2019 the Cardinals made it all the way to the National League Championship Series and lost to the Washington Nationals, and later that year, Shildt was named the National League Manager of the Year — the first non-playing manager to do so.
MLB・23 HOURS AGO
FanSided

Why was Cardinals manager Mike Shildt fired? Team president John Mozeliak offered up an explanation that won’t make fans feel any better. The St. Louis Cardinals unceremoniously fired manager Mike Shildt on Friday. This after a historic 17-game winning streak turned the team’s season around so significantly that it clinched a spot in the postseason.
MLB・1 DAY AGO
USA TODAY

Three of our six experts think the NL Central champions will go on to win the World Series.
MLB・8 DAYS AGO
Audacy

It won't be cheap, but all signs seem to point to Freddie Freeman remaining with the Atlanta Braves beyond the 2021 season. ESPN's Jeff Passan wrote Wednesday that while Freeman figures to command a pretty large contract this winter, the belief is that the reigning National League MVP will ultimately re-sign with the Braves:
MLB・16 DAYS AGO
FanSided

3 Brewers who completely choked in the NLDS

Verlander (elbow) is expected to receive a qualifying offer from the Astros this offseason, Chandler Rome of the Houston Chronicle reports. Verlander could potentially have an interesting decision on his hands. If healthy, he'd almost certainly receive more than the qualifying offer, which was worth $18.9 million over one year last year. He'll enter next season as a 39-year-old coming off of Tommy John surgery, so it's much less clear what his value will be on the open market. If he rejects the offer and signs elsewhere, Houston will receive draft-pick compensation.
MLB・8 DAYS AGO