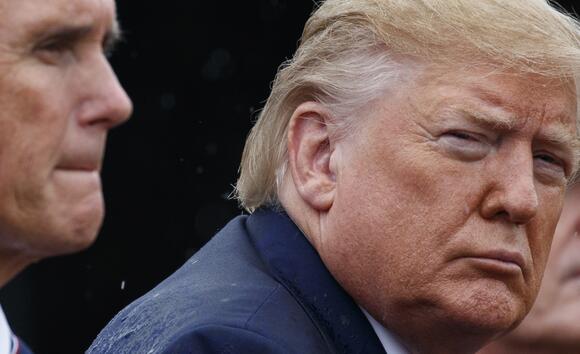 Former President Donald Trump said Gen. Mark Milley may have committed treason with secret calls to China at the end of his administration.

The ex-commander in chief called into Newsmax on Tuesday to respond to a new book that claimed Milley, the chairman of the Joint Chiefs of Staff, promised to give his Chinese counterpart advance notice if Trump ordered a strike against China.

"If it is actually true — which is hard to believe that he would have called China and done these things and was willing to advise them of an attack or in advance of an attack — that's treason," he told Sean Spicer and Lyndsay Keith.

Milley was concerned Trump might order a strike that would lead to war with China, attempting to avert armed conflict to Chinese Gen. Li Zuocheng of the People’s Liberation Army in a pair of secret calls before and after the 2020 election, according to excerpts from Peril , written by Watergate sleuth Bob Woodward and fellow Washington Post journalist Robert Costa.

“General Li, you and I have known each other for now five years. If we’re going to attack, I’m going to call you ahead of time. It’s not going to be a surprise,” Milley said to Li in one of the conversations, the book claimed.

Treason against the United States, as outlined in the Constitution , "shall consist only in levying War against them, or in adhering to their Enemies, giving them Aid and Comfort. No Person shall be convicted of Treason unless on the testimony of two Witnesses to the same overt Act, or on Confession in open Court."

Anyone found guilty of treason "shall suffer death, or shall be imprisoned not less than five years and fined under this title but not less than $10,000; and shall be incapable of holding any office under the United States," according to U.S. code .

No person has been executed for treason by the federal government under the U.S. Constitution .

At least one Republican in Congress, Sen. Rand Paul of Kentucky, said Milley should be court martialed if the reporting is true. Others have called on him to resign or be fired. Retired Army Lt. Col. Alexander Vindman, a key witness in the Ukraine-focused impeachment proceedings against Trump, said if the book is correct, Milley "usurped civilian authority, broke Chain of Command, ... violated the sacrosanct principle of civilian control over the military," and should step down .

In his interview with Newsmax, Trump admitted he was frustrated with China on trade and the coronavirus but said it was a "ridiculous" claim he considered an attack on China, denying ever thinking about such an operation.

"I think he is trying to just get out of his incompetent withdrawal out of Afghanistan," Trump said of Milley.

Trump also said he considers Woodward and "his cohorts" to be "extremely dishonorable people."

Milley remains chairman of the Joint Chiefs of Staff in the Biden administration. The Pentagon did not comment on the book as of press time.

This from the same guy who said he believed Putin over the United States Intelligence agencies, saluted a North Korean general, and never said a word about the bounties Russia put on our soldiers? Yeah...sure...🙄👌🏼

commander in chief? he was the dictator in chief. did he seek advice before he did things? did he have any concern for the USA when he did his last ditch pardoning? did he let us know we were facing the pandemic? not until it benefited him. commander in chief? think twice before you speak

Trump doesn't know the meaning of treason! That's because he's already committed treason so many times! To Trump, he has successfully turned the meaning around on the one's who is fighting for our country and keeping us safe! The whole world saw how Trump fell apart after losing the election. He was so unhinged, he still thinks he's the president of the United States!

Comedian Jon Stewart said the media's hyperfocus on former President Trump is a mistake and that casting him as an "incredible supervillain" distracts from other threats. The former "Daily Show" host told CNN's Jake Tapper in an interview airing Sunday that political pundits are "making a mistake" blaming Trump for the country's divisive discourse, arguing they should turn their focus to the threat posed by much larger institutions that have dangerously embraced "the idea that power is its own reward."
POTUS・20 HOURS AGO
Newsweek

"Do not be like those who forgot Allah, so Ally made them forget themselves. Here they really went astray," Trump's site read in Turkish.
PRESIDENTIAL ELECTION・4 HOURS AGO
Washington Post

Editor’s note: This article is part of a series on current challenges facing the federal bureaucracy from “Rethinking Our Democracy.” A joint initiative by the Center for Effective Government (@UChicagoCEG) at the University of Chicago and Protect Democracy (@protctdemocracy), “Rethinking our Democracy” produces written series on key areas of institutional and democratic reform. All other articles can be found here.
POTUS・10 HOURS AGO
POLITICO

Trump is already trying to tangle the probe up in the courts. He doesn’t have to succeed.
PRESIDENTIAL ELECTION・2 HOURS AGO

On Wednesday Trump said, "If we don't solve the Presidential Election Fraud of 2020…Republicans will not be voting in '22 or '24."
PRESIDENTIAL ELECTION・1 DAY AGO
Newsweek

Donald Trump Not 'Off Limits' For a January 6 Subpoena, Committee Chair Says

"Nobody is off limits to a subpoena from this committee," House 1/6 Select Committee Chairman Bennie Thompson said.
POTUS・3 DAYS AGO
Washington Times

President Trump and his closest aides insist they were never informed of intelligence in late 2020 suggesting China’s military was prepping for a surprise U.S. attack, information that prompted the chairman of the Joint Chiefs of Staff to launch private, back-channel diplomacy to de-escalate supposed war tensions. Secretary of State...
MILITARY・6 DAYS AGO
WashingtonExaminer

Wave of pro-Trump books to counter Grisham and Schiff

A crush of anti-Trump books, led by former aide Stephanie Grisham’s tell-all I'll Take Your Questions Now and Rep. Adam Schiff’s condemnation Midnight in Washington , are about to be challenged by a new wave that highlight the achievements of the 45th president. Former White House chief of staff Mark...
POTUS・7 DAYS AGO

Donald Trump is now formally exerting executive privilege to withhold White House records from the January 6th Committee. President Biden is expected to reject this effort to conceal the documents, setting up what could be a legal showdown. MSNBC’s Dr. Jason Johnson fills in for MSNBC’s Ari Melber to break it all down. Oct. 8, 2021.
POTUS・9 DAYS AGO
Daily Commercial

From the Right: Gen. Milley, if not treason, what then?

As I watched the congressional hearings on the loss of Afghanistan, I was completely stunned by the testimony of Gen. Milley, Gen. “Frank” McKenzie, commander of U.S. Central Command, and Department of Defense leader Gen. Lloyd J. Austin. Milley, in an interview with journalist Bob Woodward, not only talked when...
U.S. POLITICS・10 DAYS AGO
AOL Corp

Ex-press secretary Stephanie Grisham: If Trump wins in 2024, 2nd term will be about 'revenge'

If former President Donald Trump runs and wins back the White House in 2024, his second term in office will be all about "revenge," his former press secretary said Monday. In an interview with ABC News' George Stephanopoulos, Stephanie Grisham said that the former president's administration often held back in pursuing retribution against his perceived political enemies because he was seeking reelection.
PRESIDENTIAL ELECTION・14 DAYS AGO
Tahlequah Daily Press

Gen. Mark Milley is the current chairman of the Joint Chiefs of Staff and has served in that capacity since 2019, nominated by former President Donald Trump. In their recent book, Peril, Bob Woodward and Robert Costa claim that Milley, in a telephone conversation with Speaker of the House Nancy Pelosi, agreed that Trump was crazy. Last week, he denied saying that.
FOREIGN POLICY・13 DAYS AGO

Several true but easy conclusions suggest themselves regarding two stories out this week about the Trump campaign’s attempts to overturn last year’s presidential election. Rather than just look backward, though, let’s focus forward toward a cure. The cure would be one that everybody on the political spectrum should agree on,...
PRESIDENTIAL ELECTION・25 DAYS AGO
Newsweek

Bannon confirmed what journalists Robert Costa and Bob Woodward recently reported, that he had a "war-room-type meeting" with Trump allies in D.C. on January 5.
POTUS・26 DAYS AGO
Fox News

President Biden roundly criticized then-President Donald Trump during a rush on toiletries and other goods in the early days of the coronavirus pandemic, but now that exponential inflation and a supply chain crisis has set in, the Delaware Democrat fails to be circumspect in that regard, the panel on "The Five" discussed Friday.
POTUS・2 DAYS AGO

WASHINGTON, Oct 15 (Reuters) - U.S. President Joe Biden said on Friday the U.S. Justice Department should prosecute people who defy subpoenas to testify before a congressional select committee probing the deadly Jan. 6 assault on the Capitol. "I hope that the committee goes after them and holds them accountable,"...
CONGRESS & COURTS・2 DAYS AGO
Daily Mail

House Intelligence Committee Chair Adam Schiff won't say whether former Special Counsel Robert Mueller should have been taken off the Russia probe due to 'cognitive decline.'. But in his new book and an interview promoting it, he recalled how horrified he was when Mueller began his testimony before Congress in July 2019.
CONGRESS & COURTS・5 DAYS AGO
The Hollywood Reporter

George Clooney on Sunday ruled out having a second career in politics, saying he would rather have a “nice life” and is looking to reduce his workload. Nevertheless, the 60-year-old actor and director waded into politics during an interview with the BBC’s Andrew Marr. Clooney, a longtime supporter of U.S. President Joe Biden, described America as a country that is still recovering from the damage caused by Donald Trump. When asked whether he had any intentions of running for office, Clooney was quick to dismiss the idea. “No, because I would actually like to have a nice life,” said Clooney, who appeared on...
PRESIDENTIAL ELECTION・7 DAYS AGO
Newsweek

The former ambassador to the United Nations said she doesn't want the Republican Party going back to the "days before Trump."
PRESIDENTIAL ELECTION・12 DAYS AGO