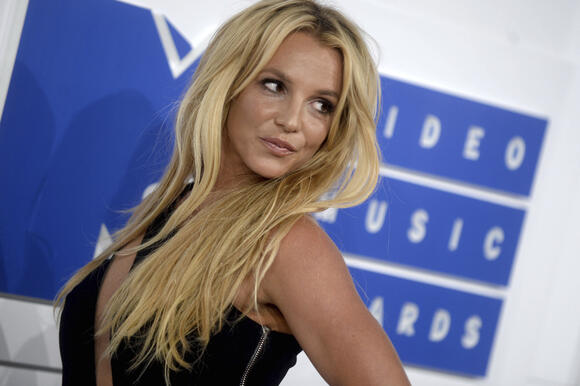 UPDATE (9/20): Britney Spears is back on Instagram after briefly deleting her account. The singer reactivated her account with some photographs from a recent trip to celebrate her engagement to Sam Asghari. “Some shots from my weekend getaway to celebrate my engagement with my … holy shit … FIANCÉ,” Spears wrote. “I still can’t believe it !!!! I couldn’t stay away from the gram too long so I’m back already!!!! Psss I took these in Palm Springs with clip in extensions!!!!

Britney Spears deleted her Instagram Tuesday, September 14th, after sharing a post that thanked her supporters in the #FreeBritney movement.

On Twitter, Spears explained, “Don’t worry folks … just taking a little break from social media to celebrate my engagement!!!! I’ll be back soon”

A source close to Spears said the decision was hers. Spears also recently indicated she would be posting less in the future.

Crowd Surf, the company that has long helped manage Spears’ social media accounts, did not immediately return a request for comment. Instagram, meanwhile, confirmed to Insider that Spears’ account was deactivated and that Instagram did not remove it.

Per screen grabs, Spears’ final post contained photos of an article titled, “Infusing education with heart.” In the caption, Spears wrote, “I had to repost this so you can see the whole article! Growing up in a world where basically almost everything I did was controlled by someone else… I hope this message gets to people who have been confused or manipulated by a system! No … you’re not alone and no … you’re not crazy! People need to hear this before it’s too late! I’ve waited 13 years and counting for my freedom! Again … team #FreeBritney you guys fucking kick ass! Love you so much and God bless!”

Spears’ Instagram has played an important role in her conservatorship battle and the evolution of the #FreeBritney movement. For many fans, Spears’ posts seemed like a rare and honest window into her interior world when so much of her life was under the thumb of the conservatorship and her father, Jamie Spears. The #FreeBritney movement effectively began when two fans, Tess Barker and Barbara Gray, launched the Britney’s Gram podcast in November 2017 to parse the singer’s social media dispatches.

Spears’ decision to delete her Instagram comes two days after she announced her engagement to longtime boyfriend Sam Asghari (the news was, of course, announced on Instagram). It also comes after Jamie Spears filed a petition last week to end serving as the singer’s conservator. The next hearing in the case is scheduled for September 29th.

Britney Spears on Possible Conservatorship End: ‘There’s a Lot of Things That Scare Me’

As the conservatorship over Britney Spears appears closer to reaching an end than ever before, the singer took to Instagram to share her ambivalent feelings and thoughts on navigating her life free from the constraints that have been imposed on her for 13 years. “I’ll just be honest and say I’ve waited so long to be free from the situation I’m in … and now that it’s here I’m scared to do anything because I’m afraid I’ll make a mistake!!!,” she wrote. “For so many years I was always told if I succeeded at things, it could end … and it...
CELEBRITIES・10 DAYS AGO
Rolling Stone

With her conservatorship potentially nearing an end in the coming weeks, Britney Spears has taken to her Instagram account to address the way she’s been treated by her family in the past. “This message is to my family … for hurting me deeper than you’ll ever know,” she wrote in the paragraph posted under a photo of a mini typewriter. The message finds Spears discussing the feeling of humiliation that comes with always being the person to make plans with loved ones but not receiving the same energy and dedication in return. “It’s humiliating and it’s like every person I’ve ever opened...
CELEBRITIES・1 HOUR AGO
Rolling Stone

Travis Barker and Kourtney Kardashian did exactly the thing you’d expect them to do ahead of Halloween, dress up as famously dysfunctional couple Sid Vicious and Nancy Spungen. Kardashian shared a photo series of the couple’s costume on Instagram with the caption, “Till death do us part.” Super cute, considering...
CELEBRITIES・1 DAY AGO
The Independent

Britney Spears’s father is reportedly being investigated by the police over claims he secretly monitored her communications and recorded her conversations.Last week, a new documentary from The New York Times titled Controlling Britney Spears claimed that Jamie Spears was in charge of a surveillance set up that tracked his daughter’s messages and calls, as well as secretly recorded the singer’s interactions in her bedroom.In response, Britney’s lawyer accused Jamie of “horrifying and unconscionable invasions of his adult daughter’s privacy”, and called for his immediate removal from her conservatorship.While Jamie has insisted that his daughter knew about the recordings, Deadline...
CELEBRITIES・28 DAYS AGO

Kevin Federline would be furious if the claims that his children’s private conversations with mom Britney Spears were secretly recorded prove to be true, his attorney told Page Six. “I think that would be pretty outrageous and Kevin would be upset about that,” lawyer Mark Vincent Kaplan yesterday (September 27),...
CELEBRITIES・27 DAYS AGO
enstarz.com

Britney Spears was said to have had a big issue with ex-husband Kevin Federline for three years, as she wanted him investigated by the FBI. Previously, the FBI reportedly looked at the allegations where the pop star's father, Jamie Spears, tracked his daughter's private spaces and her every move. Along those lines, an insider even told the source that he "hired a security firm to monitor his "toxic" star daughter's communications without her knowledge."
CELEBRITIES・7 DAYS AGO
HollywoodLife

Britney Spears recently shared another emotional message for her family, taking to social media to air out her grievances. Britney Spears is on the brink of being completely free of her conservatorship, and she’s continuing to express her feelings about the ordeal on social media. The “Stronger” singer posted to her Instagram on Tuesday, October 5 with some ethereal art showing a woman flying in to save another woman lying helpless on a mattress on the ground.
CELEBRITIES・20 DAYS AGO
Indy100

Kylie Jenner has again come under fire for accusations of “blackfishing” after sharing a selfie video on her Instagram stories with a noticeably darker skin tone. The cosmetics mogul and Keeping Up With the Kardashians star received backlash after posting the video on Sunday. In the clip, she can be seen listening to Smoke by Don Toliver featuring HVN and SoFaygo in a car. She gazes into the camera before revealing her look for the day and placing her hand on her pregnant stomach. Viewers immediately noticed that the 24-year-old’s skin complexion was darker than usual..@KylieJenner looks gorgeous in...
CELEBRITIES・5 HOURS AGO

As #FreeBritney gets closer to becoming a reality, Britney Spears is opening up about her fears regarding life after her 13-year conservatorship. In a lengthy Instagram post on Friday, the pop star said, although she is grateful to finally be in the position she’s in, she has some concerns — mainly, that her life will return to the paparazzi frenzy that it was before and any mistakes will make headlines. “I’ll just be honest and say I’ve waited so long to be free from the situation I’m in … and now that it’s here I’m scared to do anything because I’m afraid...
CELEBRITIES・10 DAYS AGO
Newsweek

Why Britney Spears Will Not Be Cropping Her New Puppy's Ears

Britney Spears' fiancé, Sam Asghari, revealed over the weekend that he had surprised the star with new puppy Porsha—and they're taking a stance on her welfare.
PETS・13 DAYS AGO
HuffingtonPost

Britney Spears issued a warning to family members complicit in her conservatorship in a new Instagram post on Friday. “Lord have mercy on my family’s souls if I ever do an interview!!!” the pop star wrote in a lengthy caption detailing her excitement, fears and confusion about the possible end of the highly restrictive legal arrangement she’s been under since 2008 when she was hospitalized for a psychiatric evaluation.
CELEBRITIES・10 DAYS AGO
E! News

Watch: Britney Spears' Fiance Surprises Her With New Puppy. For more than a year, fans have heard that Britney Spears does not want to work anymore, and now, she's confirmed it's true. While the pop star's father Jamie Spears is no longer a conservator of her estate or person, Britney...
MUSIC・10 DAYS AGO

The corruption behind Britney Spears’ conservatorship is exposed in Netflix’s new documentary, “Britney vs. Spears”

In the recently-released Britney vs. Spears documentary, filmmakers unpack the 13 years of conservatorship Britney Spears has been under. The documentary reveals the ins and outs of the conservatorship, including the restrictions on the global pop star’s personal and financial decisions. The documentary exposes the corruption that occurs in Britney’s conservatorship and the difficult journey it took for her to break free from her father’s control.
MUSIC・23 HOURS AGO
102.5 KISS FM

Britney Spears is opening up more and more about her newfound freedom and the worries that come with it. On Friday (Oct. 15), the "Toxic" singer shared an honest Instagram post about her 13-year conservatorship battle, including the removal of her father from it. While her father, Jamie Spears, has been removed as her financial conservator, she is still under the conservatorship for the time being until more legal proceedings take place at a future time.
CELEBRITIES・9 DAYS AGO
People

Britney Spears is considering putting pen to paper very soon. The 39-year-old pop star revealed in an Instagram caption Tuesday that she is open to publishing a book in 2022. This comes after Britney after her father Jamie Spears was officially suspended as conservator of her estate late last month.
BOOKS & LITERATURE・12 DAYS AGO
TODAY.com

Did Britney Spears reveal how she feels about sister's book in new post?

Did Britney Spears just subtly address her sister's upcoming book?. One of the singer's recent Instagram posts has left fans wondering if she's trying to send a hidden message. On Tuesday night, the 39-year-old posted a photo of herself rocking a bejeweled bodysuit and admitted that she's been posting a...
CELEBRITIES・13 DAYS AGO
Fox News

Britney Spears is considering putting pen to paper. On Tuesday, the 39-year-old pop star announced on Instagram that she's considering releasing a book in 2022 and offered a handful of potential titles. Alongside a picture of herself biting her fingernail, the star said she got "carried away" on Monday when...
CELEBRITIES・13 DAYS AGO
Elle

There have been rumors that pop icon Britney Spears wanted to hang up the mic, and now in a recent Instagram post, she's confirmed it's true. In a long caption, Spears explains how having her father Jamie Spears off her conservatorship is exciting and disorienting. “I'll just be honest and...
CELEBRITIES・10 DAYS AGO