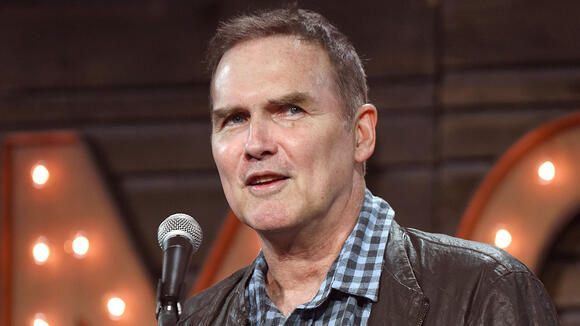 Of all his masterful comedy work on stage and on the big screen, Norm Macdonald was perhaps at his best during a 1997 appearance on Late Night with Conan O’Brien .

The comic-actor, who died Monday at 61 after a secret battle with cancer, had everyone in hysterics while a guest on O’Brien’s show along with Melrose Place star Courtney Thorne-Smith.

Already giving O’Brien plenty of hilarious grief after he came out first (“I didn’t know what Norm was going to talk about tonight and sometimes it’s best if you don’t know,” the host noted), Macdonald went all out when joined with Thorne-Smith.

The actress had recently left Melrose Place to do a film with comedian Carrot Top, the later notorious box office bomb, Chairman of the Board .

“He’s extraordinarily sweet,” Thorne-Smith said of her co-star Carrot Top. “He worked very hard and it was adorable.”

Macdonald could not keep quiet any longer and he went for it, one comedic punch after another.

“Is it call nine and a half seconds?” Macdonald asked to huge laughs. After everyone settled down, the comic jabbed, “Because he’s a premature ejaculator,” to another round of laughs.”

At that point, there was no holding Macdonald back as he continued to chip away one brilliant quip after another.

“I know what it is going to be called,” he said. “If it’s got Carrot Top in it, do you know what a good name for it would be? Box Office Poison . I’m going to go see it for Courtney.”

Finally, Thorne-Smith revealed the title of the film would be Chairman of the Board , which O’Brien said to Macdonald, “Do something with that, you creep.”

And that was the moment Macdonald dropped the mic: “I bet the Board it spelled bored.”

It took a few moments for everyone to compose themselves before they moved on in the interview.

Watch the segment below.

“It is great to be back here at Saturday Night Live, and it is even greater to be hosting the show for my first and very last time,” joked Jason Sudeikis at the beginning of his monologue. “Now for those of you who don’t know, I worked at SNL for 10 years, an ‘actors dozen,’ we say. And its so neat to be a small part of this show’s amazing history: a history that was fueled for its first 25 years by cocaine and adrenaline, the next 15 years by Starbucks and unhealthy comparisons. And the last six years by…Adderall and...
TV & VIDEOS・2 DAYS AGO
The Hollywood Reporter

Snoop Dogg has revealed that his mother, Beverly Tate, has died. The rapper paid tribute to Tate through a series of photos and videos posted on his Instagram account Sunday. He shared a picture of himself next to Tate with the caption, “Mama thank u for having me.” In another post, he uploaded a photo of his mother dressed up holding a bouquet of flowers. He wrote, “Thank u god for giving me an angel for a mother.” The rapper also shared a video of himself listening to music in a dark room and a following post with the words, “Till....
MUSIC・1 DAY AGO
The Hollywood Reporter

If you purchase an independently reviewed product or service through a link on our website, we may receive an affiliate commission. You can now sweat in style just like Halle Berry, thanks to her activewear collection for Sweaty Betty. The London-bred workoutwear label has teamed up with the actress-turned-director and her wellness brand, Rē•spin, on a limited-edition range inspired by boxing and Japanese jiu-jitsu. A mix of technical and lifestyle pieces, it goes seamlessly from the gym to the streets, blending functionality with fashion. Following a successful first launch in May, the collaboration continues with a new fall capsule. The latest 24-piece line ($14...
APPAREL・3 DAYS AGO
Finger Lakes Times

Conan O'Brien previews his HBO Max show on Inside Conan podcast, which will also feature interviews with his wife, Jack McBrayer and Courtney Thorne-Smith

Season 3 of the TeamCoco podcast Inside Conan returns Oct. 22 with Conan as guest. Other guests this season include Liza Powel O’Brien, Conan's wife of two decades whom he met during a Late Night remote taping, Jack McBrayer, Adam Pally and long-time prop master Bill Tull. Additionally, Courtney Thorne-Smith will discuss her viral 1998 Late Night interview that Norm Macdonald disrupted. Conan also offered some details what his upcoming show won't be. “Someone in the machinery somewhere at the network threw the word variety in there because we’re in the variety comedy category, which is an old term. A lawyer in the bowels called it a variety show,” Conan tells Inside Conan co-hosts Mike Sweeney and Jessie Gaskell, who normally work as his writers. “That is completely not what’s going to happen. What I’d like to do is something that does not come on every night. We have this world now, in this streaming universe, where people can make fewer of something, and I was thinking I’d really like to double down on the things I love, which involves getting out of the studio, which combines a lot of the elements that make me a little different.”
TV & VIDEOS・4 DAYS AGO
Finger Lakes Times

When Norm Macdonald Returned to Host ‘SNL,’ Then Skewered It

For those outside the loop of comedy news, Norm Macdonald probably seemed like an unspectacular choice to host Saturday Night Live: He was far from an A-level celebrity, and his latest projects (the box office flop Dirty Work, his soon-to-be-short-lived series The Norm Show) didn’t exactly light the world on fire.
CELEBRITIES・3 DAYS AGO
Journal Inquirer

Conan O’Brien out for comedy, not variety

Even though his new HBO Max show is being called a variety show, Conan O’Brien said he is not bringing out his inner Ed Sullivan to host it. “A lawyer in the bowels called it a variety show,” O’Brien said on a podcast. “That is completely not what is going to happen. What I would like to do is something that does not come on every night. We have this world right now, in this streaming universe, where people can make fewer of something. And I was thinking I would really love to double down on the things I love.”
TV & VIDEOS・4 DAYS AGO
Finger Lakes Times

Saturday Night Live poked fun at Ellen DeGeneres with a skit involving Jason Sudeikis.The Ted Lasso star, and former SNL cast member, hosted an episode of the American sketch show for the first time on Saturday (23 October).Among the highlights were his opening monologue, in which he joked that Ted Lasso’s success was “truly shocking”, as well as cameo appearances from Oscar Isaac, Emily Ratajkowski and Nicholas Braun., who plays Greg in HBO show Succession.But, it was his skewering of DeGeneres, whose talk show is set to come to an end following (but not due to) multiple accusations of...
TV & VIDEOS・2 DAYS AGO
International Business Times

Mayim Bialik has finally revealed why she and Neil Patrick Harris are no longer friends, and according to the "Big Bang Theory" star, it has a lot to do with her lack of interest in musicals. The 45-year-old actress confessed that in 1997, she watched "Rent," in which Harris played...
CELEBRITIES・26 DAYS AGO
DesignerzCentral

We Can’t Believe What Nicole Kidman Is Saying About Her Divorce From Tom Cruise Now--Yikes!

Nicole Kidman and Keith Urban are the epitomai of couple goals, so it’s always hard to remember a time when they weren’t together. And we sometimes forget that once upon a time, she and Tom Cruise were not only an item but actually one of the hottest couples in Hollywood. Now that’s taking us back…
CELEBRITIES・28 DAYS AGO
People

Having been introduced to HSN at an early age by mom Evelyn Braxton, Toni Braxton and her famous sisters are longtime fans of the shopping television network — "The whole Braxton crew watches," she tells PEOPLE exclusively. So when the R&B icon decided it was time to launch her first-ever fragrance, parterning with HSN was a no-brainer.
BEAUTY & FASHION・12 DAYS AGO
DoYouRemember?

If a Happy Days revival ever happened, Ron Howard has someone in mind to play his former character, Richie Cunningham. Ron played Richie on Happy Days from 1974 until 1984. Fans continue to ask Ron and the other stars if they see the show ever getting a remake. Ron shared...
MOVIES・12 DAYS AGO
WJW FOX 8 News Cleveland

(WJW) – Actor, rapper and comedian Ricarlo Flanagan has died at age 40. Flanagan’s agent confirmed the news to Deadline. His cause of death has not been confirmed. Flanagan recently posted to Twitter about contracting COVID-19. “This covid is no joke. I don’t wish this on anybody,” he wrote. Flanagan had a recurring role on […]
CELEBRITIES・13 DAYS AGO