Then-CIA director Gina Haspel said the US was 'on the way to a right-wing coup' after Trump lost the election: book 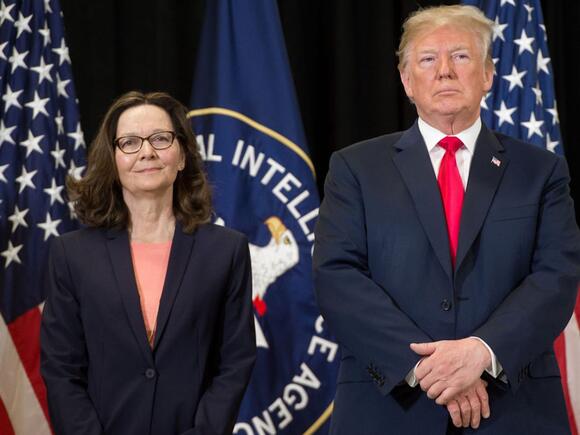 The former CIA director expressed concern that the US was headed toward a right-wing coup after then President Donald Trump lost the 2020 election, according to a new book obtained by The Washington Post .

The book, " Peril ," by The Post's Bob Woodward and Robert Costa, is set to be released next week and documents the chaotic final months of Trump's presidency and the beginning of Joe Biden's term.

The Post reported that the top officials in the US military and intelligence apparatus were afraid of what Trump might do in his quest to overturn the election results and the effect that his lies about the election could have on his agitated base.

Two of those officials were Gen. Mark Milley, the chairman of the Joint Chiefs of Staff, and Gina Haspel, the CIA director. In one conversation, the book said, Haspel told Milley, "We are on the way to a right-wing coup." It's unclear when during the transition period the conversation took place, but it came as Trump and his loyalists were pushing the lie that the election had been "rigged" and stolen from him.

Trump's bogus conspiracy theories grew so frenzied that Milley started thinking the president was suffering a mental decline after losing the election, the book said, according to The Post.

The president's actions also sparked concerns overseas about how far he would go to regain control of the White House. Those concerns persuaded Milley to call his Chinese counterpart on two occasions - once before the election and once after the Capitol riot - to reportedly assure him that Trump would not start a war with the country.

In another phone call on January 8, two days after the failed insurrection, Milley told House Speaker Nancy Pelosi that he agreed with her when she called Trump "crazy," the book said.

This story is developing. Check back for updates.

Trumpers, pay attention. Your man, Trump is very dangerous. Listen to what people who worked with him are telling you. Is that what you want for America

more and more people are coming out about what really happened on January 6th. like it or not Republicans, it was an act of sedition

The Country was never in great turmoil, until Trump and his Supremacist started or rather tried his dictatorship and culpability with the nation.

"We're members of Congress. We have a code of ethics of how we should portray ourselves," McCarthy told CNN on Tuesday.
GEORGIA STATE・9 HOURS AGO
Business Insider

Marjorie Taylor Greene suggested the Pentagon may have withheld information about Chinese spy balloons from Trump, and called for an investigation.
GEORGIA STATE・15 HOURS AGO
Business Insider

China flew spy balloons over the US while Trump was president, but nobody realized until after he left office, reports say

Other suspected Chinese surveillance balloons had crossed into the US at least three times during the Trump administration, officials said.
SOUTH CAROLINA STATE・1 DAY AGO
Business Insider

Bill Clark/CQ-Roll Call via Getty Images ABC anchor Jonathan Karl called out Sen. Marco Rubio during a tense exchange on Sunday about the Chinese spy balloon. During Rubio's appearance on ABC's "This Week," the Florida senator was asked if President Joe Biden should have acted against the military's advice and shot the suspected spy balloon down over the US mainland. The balloon was spotted floating over Montana, near a nuclear missile base. Rubio conceded that falling debris from the balloon "could hurt, harm, or kill people." But the senator also hit out at Biden for what he said was weakness in the face of China's provocations.
FLORIDA STATE・1 DAY AGO
Business Insider

Trump's new lawyer in the case brought by E. Jean Carroll asked for a six-week delay to the trial, which would push it from April all the way to June.
WASHINGTON STATE・7 HOURS AGO
Business Insider

The desk chairs that previous vice presidents used were all calibrated for taller men, according to the New York Times.
TEXAS STATE・1 DAY AGO
Business Insider

George Santos grabbed an aisle seat at the State of the Union. Not everyone was eager to shake his hand.

Seated beside GOP Rep. Thomas Massie of Kentucky, Santos soon discovered that not everyone, including some Republicans, was interested in seeing him.
TENNESSEE STATE・2 HOURS AGO
coinchapter.com

The US Government ordered the Pentagon to destroy the alleged Chinese spy balloon. The US Air Force shot down the balloon with a single missile as it drifted over the Atlantic Ocean. China hit back at the decision, threatening a strong retaliation. YEREVAN (CoinChapter.com) — Over the last few days,...
MONTANA STATE・2 DAYS AGO
Business Insider

Trump, who is known for nasty smears against his opponents, has ramped up his attacks against the the governor.
FLORIDA STATE・3 HOURS AGO
Business Insider

Trump called his CFO Allen Weisselberg 'My Jewish CPA' to his face, and threatened him to 'make me happy or else,' according to a new book

Ex-prosecutor Mark Pomerantz shared the story, which he got from interviews with Weisselberg's former daughter-in-law, in his forthcoming book.
FLORIDA STATE・1 DAY AGO
SheKnows

If you purchase an independently reviewed product or service through a link on our website, SheKnows may receive an affiliate commission. You probably haven’t heard the name Stormy Daniels for a while, but that $130,000 hush payment Donald Trump made to the adult-film actress in 2016 is still haunting him. The Manhattan District Attorney’s office believes that the money was a violation of “election and business-records laws,” so they are pondering felony charges.  According to Rolling Stone sources, the former president’s lawyers already have a legal strategy to try and squirm out of the possible charges. They are trying to get him...
11 HOURS AGO
Business Insider

Family of 3 found dead in apparent suicide pact were 'hell-bent' on Trump winning, thought it could be 'the end' if he lost: reports

A family of three was found shot dead in their Pennsylvania backyard last week. Police are describing it as a suicide pact, citing handwritten notes.
YORK, PA・1 DAY AGO
Business Insider

A close read of Beijing's official statement shows it doesn't think the US violated international law by shooting down its balloon, says a legal expert who studies China

China didn't accuse the US of violating international law this time, as it often says when it thinks it can argue such a case, expert Julian Ku said.
WASHINGTON STATE・1 DAY AGO
Business Insider

"Anybody who doubts it, contact my office. I'll give you a copy," a defiant Biden responded to the outpouring of boos.
GEORGIA STATE・1 HOUR AGO
Business Insider

Ex-Romney strategist Stuart Stevens on MSNBC blasted Nikki Haley for her expected White House bid. "No one else really embodies sort of the collapse of the party as well as Nikki Haley," he said. Haley, a former South Carolina governor, served as the US Ambassador to the UN under Trump.
SOUTH CAROLINA STATE・2 DAYS AGO
Business Insider

FTX has chased politicians like Nancy Pelosi to return donations given before the crypto giant's collapse. They now have a deadline of February 28 to pay.

FTX previously asked for the money to be returned in December; donor recipients now have until the end of February to return funds.
PENNSYLVANIA STATE・1 DAY AGO
Business Insider

"If and when it passes, I will happily, happily comply. I've never said I'm going to unilaterally comply," Cruz told CBS of running for a third term.
TEXAS STATE・2 DAYS AGO
Business Insider

A Swedish-made fighter jet could tip the scales against Russia in Ukraine, but it might not get there any time soon

Ukraine's air force remains in the fight almost a year after Russia's shambolic invasion. Sweden's JAS 39 Gripen-C fighter, designed for rugged environments, could help Ukraine stay in the fight. But there aren't many Gripens available, and training Ukrainian pilots on them will take time. Meet the JAS-39 Gripen: Contrary...
2 DAYS AGO
RadarOnline

Vladimir Putin’s forces are starving in Ukraine and are forced to survive on only potatoes, onions and instant noodles cooked using the back ends of rockets, RadarOnline.com has learned.In a surprising development to come as Russia’s death toll recently surpassed 500,000, one Russian soldier spoke out to reveal the Russian military’s food situation has not changed even 12 months after first invading Ukraine in February 2022.Even more shocking was recently released footage of a Russian battlefield kitchen that indicated Putin’s soldiers are struggling to survive as their options for food and nutrients are severely limited.That is the revelation shared by...
1 DAY AGO