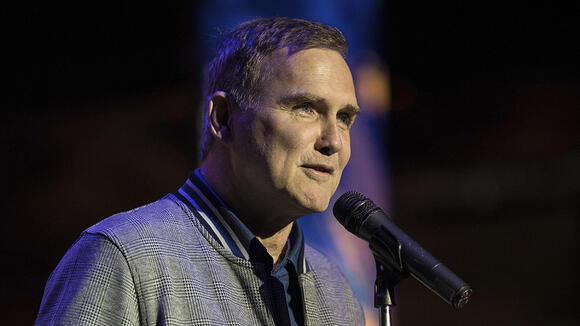 Norm Macdonald , the deadpan comedian, actor, writer and “ Saturday Night Live ” star, has died after a battle with cancer, Variety has confirmed. He was 61.

Macdonald privately battled the disease for almost a decade. “Norm was an original! He defined American humor with honesty and blunt force,” Jeff Danis, president of DPN Talent and one of Macdonald’s reps, told Variety in a statement.

Dozens of comedians, including Seth Rogen, Jon Stewart, Ron Funches and Jim Gaffigan, paid tribute to Macdonald, “one of the greatest comedians to have ever lived,” on social media.

The comedian got his start in showbiz as a writer on “Roseanne” in 1992 after making rounds at comedy clubs in Canada. He joined the cast of “Saturday Night Live” in 1993, and the next year, began his memorable stint as “Weekend Update” anchor until early 1998, when he was replaced by Colin Quinn. Macdonald was known for his dry humor, non-sequiturs and impressions of Burt Reynolds, David Letterman, Larry King, Quentin Tarantino and many more during his five-year run on the show.

Macdonald anchored “Weekend Update” during the O.J. Simpson trial, where he delivered one of his most memorable jokes at the top of the episode following Simpson’s acquittal: “Well, it is finally official: Murder is legal in the state of California.” After his removal from “Weekend Update,” Macdonald accused NBC exec Don Ohlmeyer of firing him over his controversial Simpson jokes, though Ohlmeyer cited poor ratings.

After exiting “SNL,” Macdonald created “The Norm Show” with Bruce Helford on ABC, which ran from 1999 until 2001. The comedian starred as Norm Henderson, a hockey player who is banned for life from the NFL because of gambling and tax evasion, so he must perform five years of community service as a social worker. The cast included Laurie Metcalf, Ian Gomez, Max Wright, Artie Lange and Faith Ford.

In the 1990s, Macdonald appeared in films like “Billy Madison,” “The People vs. Larry Flynt” and Eddie Murphy’s “Dr. Dolittle” as the voice of Lucky the dog. In 1998, he starred in the film “Dirty Work,” directed by Bob Saget based on the Roald Dahl short story, about two friends who raise money to pay for heart surgery for one of their fathers by starting a revenge-for-hire business. The cast included Lange, Chris Farley, Jack Warden, Traylor Howard, Chevy Chase and Christopher McDonald, and featured cameos by Don Rickles, Adam Sandler, John Goodman, and more.

Macdonald went on to provide voice work in the “Dr. Dolittle” sequels, and other animated films and shows. He voiced Lieutenant Yaphit, a gelatinous, shape-shifting engineer on Fox’s sci-fi comedy “The Orville,” starring Seth MacFarlane. A third season of the show is set to release on Hulu.

‘The Masked Singer’ Reveals Identity of the Baby: Here’s the Star Under the Mask

SPOILER ALERT: Do not read ahead if you have not watched “The Masked Singer” Season 6, Episode 4, “House Party,” which aired October 6 on Fox. “The Masked Singer” has sent the Baby into timeout. Performing under the toddler mask was comedian Larry the Cable Guy, who was sent packing at the end of the fourth episode of Season 6, “House Party.” Once again, none of the show’s panelists got it right. Ken Jeong named Gordon Ramsay as his pick. Jenny McCarthy Wahlberg guessed Bruce Willis. Nicole Scherzinger guessed James Corden. Robin Thicke said it was Chuck Norris, but with a chuckle. “I...
TV SERIES・13 DAYS AGO
Variety

Tubi is lighting up its push into adult animation. The Fox-owned free, ad-supported streamer has acquired rights to “The Freak Brothers,” a stoner comedy series starring Woody Harrelson, Pete Davidson, John Goodman and Tiffany Haddish. Tubi will premiere the first two episodes on Sunday, Nov. 14. “The Freak Brothers,” Tubi’s first original animated series, joins the streamer’s slate of more than 140 hours of original programming that it plans to roll out in the coming months, spanning genres and subgenres that it has identified as the highest-performing types of content. The eight-episode animated series is based on Gilbert Shelton’s “The Fabulous Furry Freak...
TV SERIES・20 HOURS AGO
Variety

All 12 ‘Halloween’ Movies in the Franchise, Ranked

Following a year filled with loss, 2021 has been marked by the deaths of multiple iconic actors, artists, sports legends, and other television personalities. These are the stars we've lost this year. 2 of 77 Getty Images. Melvin Van Peebles. Filmmaker Melvin Van Peebles has died at age 89. The...
CELEBRITIES・28 DAYS AGO

‘The Masked Singer’ spoilers: Who is Hamster?

“The Masked Singer” season 6 continues the twist of the Wildcards that was introduced last season. Six celebrities who aren’t part of the original line-up of 10 stars who comprised Group A and Group B get to jump into the competition after it has started. The first of these, the Hamster, appeared in night two of the super-sized premiere, which aired on FOX on September 23. He returned to compete again on episode 4 on October 6. The Hamster replaced the Octopus, who was bounced from the competition at the end of episode 1 on September 22. When he pulled off...
TV SERIES・13 DAYS AGO
FanSided

We are two episodes into Saturday Night Live season 47, and audiences have yet to see Kate McKinnon. Where is the fan-favorite cast member?. McKinnon was among several SNL cast members rumored to leave the show following season 46. Cecily Strong, Aidy Bryant, and Pete Davidson also made that list. However, we now know that only Beck Bennett and Laurent Holt departed SNL ahead of this season.
TV & VIDEOS・9 DAYS AGO
The Independent

They only shared a few of his jokes, including a joke about O.J. Simpson, and it was those O.J. Simpson jokes that got him fired from the show. Regardless, while the video tribute is brief, it reminds us of how freakin’ funny this guy was! If you haven’t seen this already, I hope you enjoy.
CELEBRITIES・14 DAYS AGO

Coming out of the uncertainty of the 46th season finale featuring what appeared to be tearful sign-offs from longtime cast members — namely Kate McKinnon, Pete Davidson and Cecily Strong — season 47 of “Saturday Night Live” began with the surprising return of the entire previous cast aside from Beck Bennett. Three new featured players were also announced — Aristotle Athari, James Austin Johnson and Sarah Sherman — making for the largest ensemble to date. Pair this news with first-time host Owen Wilson and first-time musical guest Kacey Musgraves, and it’s clear that the long-running show is out to prove its ability to reinvent.
TV SHOWS・12 DAYS AGO
The Independent

Saturday Night Live is back with four first-time hosts. Kim Kardashian West is one of four inaugural hosts of the comedy show’s new season. She will take on hosting duties on 9 October, with Halsey as the musical guest.Owen Wilson hosted the season premiere the previous week, on 2 October, with Kacey Musgraves performing.The week after West’s episode, on 16 October, Rami Malek will host while Young Thug will appear as the musical guest.On 23 October, Jason Sudeikis will take over as host, with Brandi Carlile performing.Wilson, Kardashian West, Malek, and Sudeikis will all be first-time hosts.pic.twitter.com/5E6HS5YnrC— Saturday Night...
TV & VIDEOS・10 DAYS AGO
GoldDerby

This weekend marks the first time Rami Malek is hosting “Saturday Night Live,” but it turns out he’s not being welcomed with open arms by the regular cast members. “You know Rami, a lot of people find your eyes unnerving, but I don’t see it,” Ego Nwodim jokingly tells him in the latest “SNL” preview video (watch above). When Bowen Yang challenges them to a staring contest, Nwodim takes one look into Malek’s peepers and declares matter-of-factly, “This man is a demon.” The episode airs Saturday, October 16 on NBC. SEEKim Kardashian’s ‘SNL’ monologue zings family, Kanye West and O.J. Simpson In...
TV & VIDEOS・4 DAYS AGO
Press Democrat

It was only a matter of time until writer-director Hwang Dong-hyuk's smash hit survival drama, "Squid Game," got the parody treatment on "Saturday Night Live." This weekend, "SNL" host Rami Malek and cast member Pete Davidson donned the South Korean series ' signature green tracksuits for a musical version of the gruesome Netflix thriller, which has surpassed "Bridgerton" and other fan-favorite titles as the most sampled show ever released on the streaming platform.
NFL・2 DAYS AGO

‘Saturday Night Live’ is back and better than ever

“Saturday Night Live” has recently begun its 47th season, with Owen Wilson performing the monologue for the opening episode. As a long-time “SNL” fan, I was more than excited to tune in for season 47. “SNL” proves that some things just remain timeless — humor is one of those things. The show still remains as funny as it was the first time you watched it, with the hosts constantly evolving to incorporate new cultural events into hilarious jokes.
TV & VIDEOS・14 DAYS AGO
Yardbarker

It seems that anyone who crossed paths with comedic giant Norm Macdonald has a funny, sweet story to share. Add Blake Griffin to the list. "He had a show on Comedy Central my rookie year, so I did a part of his show, and then I went to go see him do stand-up several times," the Brooklyn Nets forward said during Late Night with Seth Meyers on Monday night. "He came to my charity event one year. Funniest guy ever."
BASKETBALL・14 DAYS AGO
Insider

Saturday Night Live recently returned with a new season. The longtime comedy sketch show is on its 47th season. The show takes summers off and returns in the fall. However, this season saw pretty low ratings, especially for the premiere of a new season. Reportedly, this season’s premiere was down...
TV & VIDEOS・14 DAYS AGO

Adele would love to host 'Saturday Night Live' again. The 'Hello' hitmaker made her guest-presenting debut on the late-night entertainment show last October, and she has admitted she'd love to do it all over again. In her first-ever Instagram Live with fans on Saturday (09.10.21), the 33-year-old Grammy-winner told fans...
CELEBRITIES・10 DAYS AGO
talentrecap.com

Kim Kardashian is sharing how she really feels about hosting Saturday Night Live this weekend. The Keeping Up With the Kardashians star was featured in a new promo ahead of the episode. Musical guest Halsey and cast member Cecily Strong joined Kardashian in the video as she prepares for her big hosting debut.
TV & VIDEOS・11 DAYS AGO
The Independent

Saturday Night Live last week returned to television screens for its 47th season. The long-running comedy sketch show was beamed across America from New York once again and begun on 2 October. The show continues this week on 9 October, airing in its usual slot of 11.30pm EST on NBC....
TV SHOWS・10 DAYS AGO
411mania.com

John Cena made a surprise guest cameo on last night’s episode of Saturday Night Live. The actor and WWE star appeared in a Bachelorette spoof as a contestant competing for the attention of Kim Kardashian West’s character, Rochelle. You can see the clip below, in which she picks Cena over Kyle Mooney’s “Zeek” despite Cena being married. The other contestants (who also advanced) were actor Chace Crawford (Gossip Girl, The Boys), Tyler Cameron (The Bachelorette), NBA star Blake Griffin, Chris Rock, Jesse Williams (Grey’s Anatomy), and Amy Schumer. After being rejected, Zeke leaves and apparently burns in Hell.
COMBAT SPORTS・9 DAYS AGO