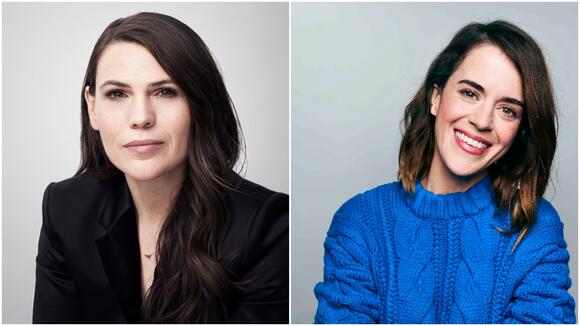 EXCLUSIVE: Clea DuVall and Mary Holland , who co-wrote Kristen Stewart-fronted romantic comedy feature Happiest Season , are turning their attention to the small screen for their next project.

The half-hour series, which the pair came up with while working on Happiest Season , follows a naive woman named Meg, who will be played by Holland, who is oblivious to the fact that she has never quite fit in with her wealthy, business-savvy family. When Meg is framed by her father for a white-collar crime she is not smart enough to commit, Meg attempts to sever ties with him and the rest of her family, and vows to start a new life without any of their help. Armed with zero life experience or skills, Meg joins the workforce and quickly discovers that the road to her fresh start is not going to be as smooth as she had hoped.

DuVall, who also created Fox animated series Housebroken , will write and direct the pilot. Temple Hill’s Wyck Godfrey, Marty Bowen, Isaac Klausner and Adam Fishbach will serve as executive producers alongside DuVall and Holland, and the project is set up at Lionsgate TV where Temple Hill has a first look television deal.

It comes after Happiest Season , which follows a woman who struggles to come out to her conservative parents at Christmas, became Hulu’s most-watched original movie to date.

DuVall is also writing, directing and exec producing IMDb TV’s High School and is filming Showtime’s The First Lady. Holland just wrapped Senior Year , which she stars in alongside Rebel Wilson, for Netflix, and will also star in the streamer’s The Woman In The House opposite Kristen Bell.

DuVall is repped by UTA and Ginsburg Daniels Kallis and Holland is repped by ICM Partners, Atlas Artists and Ziffren Brittenham.

Steve Carell to Star in FX Comedy From ‘The Americans’ Duo

The Americans showrunners are back at FX, and they’re bringing Steve Carell with them. The Disney-owned basic cable network has handed out a 10-episode order for a half-hour limited series called The Patient, starring The Office alum Carell and written by The Americans showrunners Joel Fields and Joe Weisberg. The Patient revolves around a psychotherapist who finds himself held prisoner by a serial killer with an unusual request: curb his homicidal urges. But unwinding the mind of this man while also dealing with the waves of his own repressed troubles creates a journey perhaps as treacherous as his captivity. Carell will play Alexander...
TV & VIDEOS・10 DAYS AGO
tvseriesfinale.com

How To with John Wilson: Season Two Premiere of Docu-Comedy Series Set by HBO

How to with John Wilson is gearing up for its second season on HBO, and the cable channel has set a premiere date for the docu-comedy series. HBO revealed more about the return of the series in a press release. “John Wilson, documentary filmmaker and self-described “anxious New Yorker,” returns...
TV SERIES・13 DAYS AGO
awardswatch.com

The love story of Dash & Lily has come to an abrupt end as Netflix has confirmed the romantic comedy will not be returning for a second season. Based on the young adult novels Dash & Lily’s Book of Dares by David Levithan and Rachel Cohn, the series follows the whirlwind romance between teenagers Dash (Austin Abrams) and Lily (Midori Francis). Over the Christmas holiday season in New York, the young couple develops feelings as they open up to each other by trading messages and dares in a notebook around several locations.
TV SERIES・10 DAYS AGO

EXCLUSIVE: Desmond Chiam (The Falcon and the Winter Soldier), Alexander Hodge (Insecure) and Chris Pang (Crazy Rich Asians) have joined the cast of the untitled comedy that Crazy Rich Asians scribe Adele Lim is helming for Lionsgate, in her feature debut, which is now in production. The trio will star opposite previously announced cast members Ashley Park, Sherry Cola, Stephanie Hsu and Sabrina Wu. The film, intended for an R rating, will follow the epic journey of four Asian-American women traveling through Asia in search of one of their birth mothers. Along the way, their experience will become one of bonding, friendship, belonging...
MOVIES・12 DAYS AGO
/Film

Move over, Benoit Blanc! Quit twirling that mustache, Hercule Poirot! There's a new detective on the case! Apple TV+ is letting Tiffany Haddish try her hand at sleuthing in the upcoming murder mystery, "The Afterparty." The series promises some serious twists and turns in both the plot and the show's format, as well. And though we still have a wait ahead of us before the series arrives on the streamer, we just got our first glimpse at what's to come.
TV SERIES・10 DAYS AGO
tvseriesfinale.com

Better Things is ending with its fifth season on FX. According to star Pamela Adlon, who also executive produces, writes, directs, and acts as showrunner, the comedy-drama’s fifth season is currently in production. Viewers will see the final season at some point in 2022, per Deadline. Adlon said the following...
TV SERIES・10 DAYS AGO
The Hollywood Reporter

One of the twistiest true-crime stories of recent years will be developed as a scripted drama series at Lionsgate TV. The studio has optioned rights to a book proposal by journalist and author Matthew Lysiak about the Murdaughs. Alex Murdaugh, an attorney from a prominent family in South Carolina legal...
TV SERIES・12 DAYS AGO

Apple TV+ has given a formal series green light to Shrinking, a 10-episode comedy series starring Jason Segel, who also serves as writer and executive producer alongside Bill Lawrence and Brett Goldstein, coming off their Emmy wins for the streamer’s hit comedy Ted Lasso. Written by Segel, Lawrence and Goldstein, Shrinking follows a grieving therapist (Segel) who starts to break the rules and tell his clients exactly what he thinks. Ignoring his training and ethics, he finds himself making huge, tumultuous changes to people’s lives…including his own. Shrinking is produced by Ted Lasso studio Warner Bros. Television and Lawrence’s studio-based Doozer Productions....
TV SERIES・4 DAYS AGO
Deadline

Fox has taken in for development Dirt Girls, an animated comedy series from Victoria Vincent (We the People, A Dog That Smokes Weed) and Fox Entertainment’s Bento Box Entertainment (Bob’s Burgers). The project came to Fox through Vincent’s participation in Bento Box’s SkunkWorks program, which is designed to discover, cultivate...
TV SERIES・4 DAYS AGO
Primetimer

Syfy and USA team up to revamp two iconic horror stories tonight with the debut of Chucky, a new series about the killer doll’s untold origins, and a special preview of Day of the Dead, inspired by George A. Romero’s zombie universe. Also today: Dancing with the Stars stays on theme with a special Disney villains night, the Only Murders in the Building trio faces a revolt, and Tom Hanks and Laura Dern stump for the Academy in a new ABC special. Here’s what’s new and noteworthy on TV this Tuesday:
TV SERIES・5 DAYS AGO
Apple Insider

According to The Hollywood Reporter, Segel will write and executive produce the series alongside Bill Lawrence, who serves as the showrunner for Apple TV+ series "Ted Lasso." "Shrinking" follows the story of a grieving therapist, played by Segel, who "begins to break the rules and tell his clients exactly what he thinks. Ignoring his training and ethics, he finds himself making huge changes to people's lives -- including his own."
TV SERIES・4 DAYS AGO

World’s Funniest Animals: Season Three? Has the CW Comedy Series Been Cancelled or Renewed Yet?

Michael O’Neill (Council of Dads) and Celia Weston (Modern Family) are set as leads opposite Michelle Monaghan in Echoes, Netflix’s psychological thriller limited series from 13 Reasons Why showrunner Brian Yorkey. Gable Swanlund (The Shrink Next Door) also has been cast as a series regular and Tyner Rushing (The Terminal List), Hazel Mason (The Blacklist), Ginger Mason (The Blacklist), Alise Willis (Ruthless) and Maddie Nichols (Ann Rule’s A Murder to Remember) will recur in the series. Created and written by Vanessa Gazy, Echoes is a mystery thriller about identical twins Leni and Gina, both portrayed by Monaghan, who share a dangerous...
TV SERIES・2 DAYS AGO
spoilertv.com

The Bear - New Comedy Series Ordered To Series by FX

Starring Jeremy Allen White, Ebon Moss-Bachrach, Ayo Edebiri, Lionel Boyce, Abby Elliott, Liza Colón-Zayas, Edwin Gibson and Matty Matheson. LOS ANGELES, October 12, 2021 – The Bear, a half-hour comedy about a young chef who returns to Chicago to run the family restaurant, has been picked up to series, it was announced today by Nick Grad, President, Original Programming, FX. The series from FX Productions will premiere in 2022.
TV SERIES・5 DAYS AGO
Reuters

Netflix is following through on the release of the rest of one of its more highly debated shows, Masters of the Universe: Revelation. The show's second (and final) part will release on Nov. 23, despite many fans being up in arms over Part 1. Masters of the Universe: Revelation serves as a mature follow-up to the 1980s children's fantasy series He-Man and the Masters of the Universe. Part 1 drew backlash from some fans after hero He-Man/Prince Adam (Chris Wood) and villain Skeletor (Mark Hamill) were out of action for a majority of the episodes, with a focus being put on Teela (Sarah Michelle Gellar).
TV SERIES・1 DAY AGO
The Hollywood Reporter

[This story contains a spoiler for The Many Saints of Newark.] Corey Stoll knows that fans of The Sopranos can be hardcore, so he was somewhat expecting those displeased over the twist in The Many Saints of Newark to approach him on the street with a bone to pick. But, so far, so good. The Hollywood Reporter recently caught up with the TV and film actor to discuss a variety of topics, including the reaction to the David Chase prequel film, in which he played Corrado “Junior” Soprano, what it is like to be on a Netflix show that’s all the rage...
MOVIES・2 DAYS AGO
Deadline

EXCLUSIVE: Michael Matthews is set to direct Disney’s Merlin, an adaptation of T.A. Barron’s novel series where King Arthur’s wizardry mentor is at the center of the story. Ridley Scott, who directed the 20th Century Medieval pic The Last Duel,  which bows today in theaters, was attached to direct at one point but parted ways due to his busy schedule. Sources say the film is still in early development with Disney’s live-action team. Gil Netter is producing from with the latest draft by Chris Weitz. Based on the Barron books, the series followed the origin story of a young Merlin who would go on...
MOVIES・2 DAYS AGO