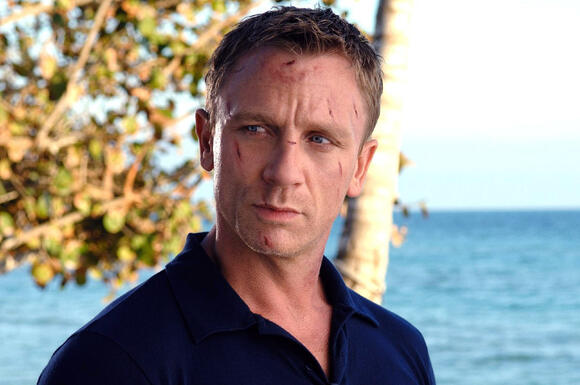 Debbie McWilliams might not be a household name, but her work as a casting director has shaped the legendary James Bond franchise for three decades now. McWilliams is the casting director responsible for hiring Timothy Dalton, Pierce Brosnan, and Daniel Craig . With Craig exiting the 007 franchise after the upcoming “ No Time to Die ,” McWilliams joined Entertainment Weekly to reflect on the actor’s casting ahead of his Bond debut, “ Casino Royale .” The casting director said she “felt sorry” for Craig after his casting led to extreme blowback from press who thought Craig didn’t fit the part of Bond.

“It was unbelievably negative, I have to say,” McWilliams said about the reaction to Craig’s casting. “The press response was awful and I felt so sorry for him, but in a funny kind of a way I think it almost spurred him on to do his damndest to prove everybody wrong. The whole way through the film, stuff would come out about [how] he couldn’t walk and talk, he couldn’t run, he couldn’t drive a car properly, so much stuff which was completely and utterly untrue. And he just kept his head down, got on with the job and then the film came out and everybody went, ‘Oh wow, I think we quite like him after all.'”

McWilliams added that “Craig’s going to be a tough act to follow.” Craig’s debut in “Casino Royale” earned acclaim, and the film was largely credited with reigniting worldwide interest in the Bond franchise. Craig’s tenure with the Bond franchise would include “Skyfall,” widely considered one of the greatest 007 movies ever made.

“There was a massive search before he was cast and it had started out as a slightly different slant on things,” McWilliams said of casting Craig. “Originally the story of ‘Casino Royale’ was meant to be a sort of new, young tryout growing into James Bond rather than the fully formed character, but we struggled to find anybody who could fill those shoes…Then as time went by they decided, let’s just stick with the old formula and let’s look at it again. And that was after a long, long search and Daniel became the obvious choice to me in the end.”

‘No Time to Die’: Why the Pre-Credit Teaser Was Essential to Daniel Craig’s Swan Song as James Bond

Daniel Craig’s James Bond quintology was a brilliant juggling act of maintaining and subverting franchise conventions, especially in exploring a first-time journey for 007. Thus, the challenge for “No Time to Die” director Cary Joji Fukunaga was completing Bond’s arc. And his catalyst was revisiting the ghosts of the past from “Casino Royale” and “On Her Majesty’s Secret Service.” [SPOILER ALERT!] But, of course, with the ironic twist of killing Bond. Yet that meant setting up “No Time to Die” with both of these tragic love story threads in the longest and most daring pre-credit teaser in franchise history. It’s a...
MOVIES・3 DAYS AGO
IndieWire

It’s a strange time for theaters. With a $50 million opening weekend for “Halloween Kills,” that means the Universal title won’t have Premium Video on Demand play for 31 days… but how meaningful is that when the Blumhouse/Miramax sequel is already available free to Peacock subscribers? Even with home access, it still grossed only $5 million less than “No Time to Die” last weekend. The production cost for the horror franchise was less than one-tenth of Daniel Craig’s James Bond finale. “Kills” by far has the largest opening total for any film to premiere on a streamer with no PVOD charge (“Black...
MOVIES・4 DAYS AGO
IndieWire

Another week, another “Saturday Night Live” hosting debut in the books. This week’s “SNL” saw Academy Award winner Rami Malek step into the hosting role for the first time ever to promote the latest James Bond film, “No Time to Die.” (As you may recall, Malek’s co-star Daniel Craig — who appeared in two sketches this week — hosted “SNL” back in March 2020 to promote “No Time to Die” as well. You may also recall real-world circumstances delaying the film.) Following both Owen Wilson and Kim Kardashian West’s solid entries into the “SNL” first-timer’s club, Malek came into Studio 8H...
NFL・4 DAYS AGO
The Independent

Daniel Craig has confirmed that he did in fact kiss Rami Malek during the filming of the new James Bond film, No Time to Die.Malek, who plays the primary villain Safin in the movie, previously told Stephen Colbert on The Late Show that Craig had kissed him when he came up with a good idea for the film.“He grabbed me, picked me up – and I can’t tell who initiated the next moment, whether it was him or I – but a kiss transpired between the two of us,” he said. “I’m going to say that Daniel initiated it,...
CELEBRITIES・14 DAYS AGO

Review: Daniel Craig leaves James Bond behind in compelling 'No Time to Die'

Pre Daniel Craig, I wasn’t much of a James Bond fan. In some quarters, such an admission by someone who writes about movies is as sacrilegious as dousing ketchup on a hot dog at a baseball field. No, I don’t do that. But what about Sean Connery, the original Bond,...
MOVIES・14 DAYS AGO
CultureMap Houston

The last we saw of James Bond, it was in 2015’s Spectre, an altogether disappointing affair that seemed to have more interest in looking backward than forward. It’s been a long road to get to the follow-up film, No Time to Die, not least because the release of the 25th official 007 movie was delayed 18 months due to the pandemic. But if that time between movies accomplished anything, it was to ensure the filmmakers didn’t repeat the mistakes of their predecessors.
MOVIES・14 DAYS AGO
No Film School

How Will Daniel Craig Say Goodbye to James Bond?

The role of James Bond sticks with you forever. I'm a huge fan of Bond movies. Over the years, they've had many actors take up the role. And as they plan for a world after Daniel Craig, we know there will be many more. The role of James Bond is both the same and different for every person who carries the character's name. They bring their own physicality, charm, and commitment to the role. Craig has done a wonderful job humanizing Bond. While we were given a gritty reboot of the character, his movies have come with some of the most fun set pieces and character moments as well.
CELEBRITIES・10 DAYS AGO
hawaiitelegraph.com

Daniel Craig reveals what he will miss about James Bond movies

Washington [US], October 9 (ANI): With 'No Time to Die' in theatres, the much-awaited film's arrival is bittersweet for fans as it marks actor Daniel Craig's final stint as the iconic spy James Bond. Recently, E! News caught up with Daniel for a brief interview where the 53-year-old actor revealed...
MOVIES・12 DAYS AGO

In No Time to Die, Daniel Craig’s James Bond exudes weariness in every scene. Bond is, in modern parlance, kind of washed. His 007 moniker is given to a new MI6 agent (played by Lashana Lynch), who quips that she doesn’t want to hurt the only one of his knees that still works, while Bond’s usual seduction methods—this time directed at Ana de Armas as a green CIA operative based out of Cuba—fail spectacularly. (Her character’s reaction is basically: “Oh god, this old guy is hitting on me.”) There might not be any time to die in the latest entry of the Bond franchise, but as it turns out, there is plenty of time to dwell on the character’s encroaching obsolescence.
MOVIES・14 DAYS AGO
seattlepi.com

When Daniel Craig signed on as James Bond in 2005, he found himself under attack by snipers more vicious than any 007 had ever faced: the media. The naysayers immediately lamented the “blond Bond” and criticized his blue eyes. The London Daily Mirror on Oct. 15, 2005, ran his photo with the headline “The Name’s Bland … James Bland.”
CELEBRITIES・14 DAYS AGO
MyNorthwest.com

The 25th installment in the James Bond movie franchise may be titled “No Time to Die,” but “Too Much Time to Die” may be more fitting. Clocking in at 163 minutes, it’s a full half-hour longer than the average Bond film and it feels like it. But given this is Daniel Craig’s swan song as Bond, perhaps the thought was he had earned the indulgence.
MOVIES・14 DAYS AGO
Telegraph

Daniel Craig joked it would be an "absolute honour to be walked all over in Hollywood" as he was honoured with a Walk Of Fame star. The outgoing James Bond actor joined the illustrious names on the world famous Los Angeles tourist attraction during a rare evening ceremony. Craig's star...
CELEBRITIES・15 DAYS AGO

(TNS) – It’s sort of a minor miracle that “No Time to Die” is actually out in theaters. The latest James Bond flick and star Daniel Craig’s last outing as 007 was originally slated for release in spring 2020 but was pushed back multiple times due to the pandemic. Very little captured how stuck in time those first few months of the pandemic felt like the “No Time to Die” posters adorning shuttered movie theaters and billboards overlooking empty roads.
MOVIES・13 DAYS AGO
St. Louis Post-Dispatch

Daniel Craig couldn't stop watching Prince Charles at the world premiere of 'No Time To Die'. The 53-year-old actor - who makes his final outing as James Bond in the movie - shared the royal box at London's Royal Albert Hall with the 72-year-old royal, his wife Camilla, Duchess of Cornwall, and the Duke and Duchess of Cambridge and admitted he couldn't resist trying to gauge the reaction of the heir to the throne.
CELEBRITIES・13 DAYS AGO
HOLAUSA

It’s finally sinking in for Daniel Craig that his time as James Bond is coming to a close. The actor stopped by The Tonight Show Starring Jimmy Fallon on Tuesday, October 12, where he talked to the late night host about what it was like filming his final scene as 007 for No Time to Die. He has been playing the beloved role since 2006, when he took over for Pierce Brosnan.
CELEBRITIES・8 DAYS AGO
BBC

Film star Daniel Craig has donated £10,000 to three fathers who have set out on a 300-mile walk to raise funds for a suicide prevention charity after their daughters took their own lives. Andy Airey, Mike Palmer and Tim Owen's "Three Dads Walking" trek will see them walk between their...
CHARITIES・12 DAYS AGO