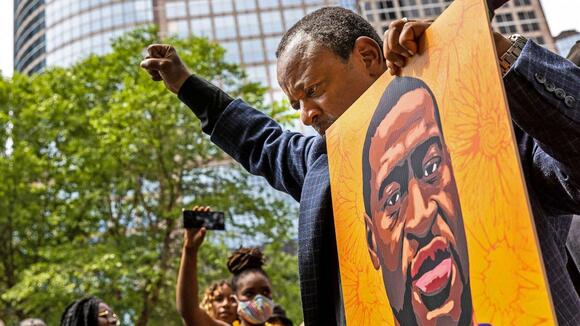 Derek Chauvin, Thomas Lane, J. Alexander Kueng and Tou Thao have been charged with violating Floyd’s constitutional rights in ways that “resulted in bodily injury to, and the death of, George Floyd,” according to the federal grand jury indictment .

The hearing may address some of the pretrial motions, including requests from Lane, Kueng and Thao asking to separate their cases from Chauvin's. Chauvin was convicted in Floyd's murder in April 2021 and his fellow ex-officers argue that they would not get a fair trial if connected to Chauvin.

Floyd was killed in May 2020 when he was placed under arrest on the suspicion that he was using a counterfeit $20 bill to buy cigarettes at a convenience store.

Chauvin was found guilty of second-degree unintentional murder, third-degree murder and second-degree manslaughter for pressing his knee against Floyd's neck for more than nine minutes. He was sentenced to 22 and-a-half-years in prison.

The federal indictment accuses Chauvin, Thao, Kueng and Lane of depriving Floyd of his rights when they witnessed him "in clear need" of medical care but instead "willfully failed to aid Floyd."

Thao and Kueng are charged with violating Floyd’s right to be free from unreasonable seizure. All four officers are also charged with depriving Floyd of his rights when they failed to provide him with medical care. The officers acted "with deliberate indifference to a substantial risk of harm," the indictment said.

While Chauvin kneeled on Floyd's neck at times during the arrest, Kueng kneeled on his back and Lane held down Floyd’s legs, according to evidence presented in state court. Thao blocked bystanders from getting involved.

The indictment also accuses Chauvin of violating Floyd's right to be free from unreasonable seizure or force by a law enforcement officer.

Following Chauvin's murder conviction, Attorney General Merrick Garland announced that the Justice Department has opened a pattern or practice investigation into the City of Minneapolis. The Minneapolis Police Department said it would investigate unconstitutional or unlawful policing in the city.

This will not go like the 1st trial, These cops are going to be found innocent, And BLM will riot and loot in the streets, You know.... Reparations!

thank God the fentanyl freak is dead....OUR MEN IN BLUE SAVED ALOT OF LIVES SINCE HE AND HIS FENTANYL HUGE LIPS ARE GONE OFF THE STREETS.

Derek Chauvin was convicted of murder in the death of George Floyd, who he also used a neck restraint against.
PUBLIC SAFETY・3 HOURS AGO
ABC News

Investigators searching for answers on the whereabouts of Gabby Petito are expressing frustration that her boyfriend has not shed any light on her possible whereabouts.
NORTH PORT, FL・1 HOUR AGO
NBC News

Olympic gold medalist Aly Raisman called for an independent investigation into the FBI and USA Gymnastics' handling of sexual abuse allegations against Larry Nassar, recounting on the "TODAY" how an FBI agent kept "diminishing" her reports of abuse after sharing similar stories in emotional testimony Wednesday. Raisman, 27, was one...
CELEBRITIES・6 HOURS AGO

Louisiana, Mississippi, Alabama and Florida are under flash flood watches.
ENVIRONMENT・2 HOURS AGO
The Associated Press

COLUMBIA, S.C. (AP) — Lawyer Alex Murdaugh surrendered Thursday to face insurance fraud and other charges after state police said he arranged to have himself shot in the head so that his son would get a $10 million life insurance payout. The shooter only grazed him. A defense attorney said...
HAMPTON COUNTY, SC・13 HOURS AGO
The Associated Press

WELLINGTON, New Zealand (AP) — The U.S., Britain and Australia have announced they’re forming a new security alliance that will help equip Australia with nuclear-powered submarines. The alliance will see a reshaping of relations in the Indo-Pacific region and beyond. Here’s what it might mean for various players:. THE UNITED...
MILITARY・9 HOURS AGO
The Associated Press

SACRAMENTO, Calif. (AP) — California Gov. Gavin Newsom handily defeated a recall election that could have removed him from office, but his Democratic allies in the Legislature already are seeking changes that could make it harder to mount such a challenge in the future. Those changes could include raising the...
CALIFORNIA STATE・14 HOURS AGO

(KHN) — In January — long before the first jabs of covid-19 vaccine were even available to most Americans — scientists working under Dr. Anthony Fauci at the National Institute of Allergy and Infectious Diseases were already thinking about potential booster shots. A month later, they organized an international group...
PUBLIC HEALTH・4 HOURS AGO
ABC News