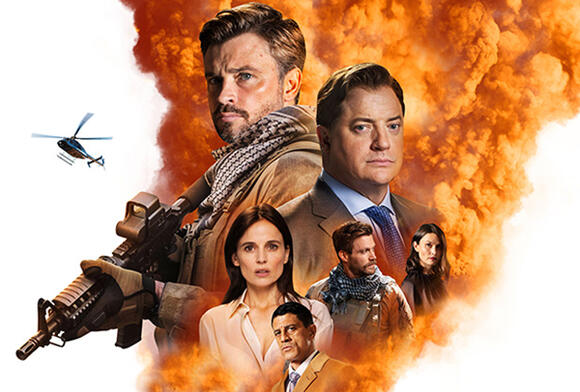 Per the official logline, Professionals “follows Vincent Corbo (Welling), a top-tier security operative, who is paid to protect the interests of rich and powerful clients by any means necessary – legal or not. After a next-gen medical satellite explodes on launch, Corbo is hired by the rocket’s designer – billionaire futurist Peter Swann (Fraser) — who suspects sabotage. Complicating Corbo’s new gig is his former paramour and now Swann’s fiancée, medical visionary Dr. Grace Davila (Anaya), who is racing to help stave off a global catastrophe. As Corbo and his team of veteran security professionals investigate the rocket disaster, they expose a lethal conspiracy of Swann’s corporate rivals, corrupt government officials, and a shadowy crime syndicate — all working to destroy Swann and take control of his tech empire. Worse, Corbo must also contend with a rogue Europol agent (Ken Duken) who is hellbent on busting him for past sins.”

A date and time for the show’s CW premiere will be announced later.

Welling portrayed Smallville ‘s Clark Kent for five seasons on The CW (plus five more on The WB) from 2007 to 2011, a role he reprised in 2019 for the Arrowverse’s “Crisis on Infinite Earths” event. Though Fraser has never starred in a CW series, he is a regular on HBO Max’s Doom Patrol , which is Arrowverse-adjacent.

Do you see yourself acquiring some time in your schedule to watch Professionals ? Drop a comment with your thoughts below.

As Supergirl speeds towards its series finale, we now have a title for the closing hour and at least one (romantic) hint at what to expect. The first hour of the double-episode finale event airing Tuesday, Nov. 9, is titled “The Last Gauntlet,” in which Supergirl and the Super Friends “take drastic action after a loved one is kidnapped by Nyxly and Lex,” according to the official synopsis. Which “unlikely ally” will step in to help the team? Meanwhile, the actual series finale, which is aptly titled “Kara,” promises to wrap the titular hero’s story in grand fashion. “In the epic series finale,...
TV SERIES・3 DAYS AGO
TVLine

Starz’s John Wick prequel series The Continental has found its Winston Scott: Colin Woodell (The Flight Attendant, The Originals) will star as the younger version of Ian McShane’s movie character, our sister site Deadline reports. Produced by Lionsgate Television, the three-night event takes John Wick fans back to 1975 New York City, where a young criminal named Winston Scott (Woodell) navigates the city’s nefarious underbelly in an attempt to take control of The Continental, a notorious hangout for all manner of ne’er-do-wells. As previously reported, Mel Gibson will play a character named Cormac. Also joining the ensemble, per Variety, are Mishel Prada...
TV SERIES・4 DAYS AGO
TVLine

Naomi Chases a Superman Scoop, Gets More Than She Bargained for in Teaser for New CW Superhero Series

It’s not easy being a nebbish nerd girl when talks of Superman are in the air, as shown in a new clip for The CW’s midseason superhero drama Naomi. Warner Bros. TV unveiled the first look on Saturday at its virtual DC FanDome event. Written and exec-produced by Ava DuVernay (When They See Us) and Jill Blankenship (Arrow), the DC comic adaptation stars The Equalizer‘s Kaci Walfall in the titular role. Naomi centers on a cool, confident Black teenager with braids as she chases her hidden and unexpected destiny. As Naomi “journeys to the heights of the multiverse” in search of the...
TV SERIES・8 DAYS AGO
The Staten Island Advance

The thrilling DC Comics-inspired series “Batwoman” resumes this week. “Batwoman” Season 3 premieres on The CW on Wednesday, Oct. 13, at 9 p.m. ET (6 p.m. PT). You can also stream the show on FuboTV (7-day free trial). The series, inspired by the classic DC Comics storyline, centers on Bruce...
TV SERIES・11 DAYS AGO

What's really dope about the live-action remake is that the show's original voice actors will be returning to make the Japanese dubs of the new show.
TV SERIES・11 DAYS AGO
tvseriesfinale.com

World’s Funniest Animals: Season Three? Has the CW Comedy Series Been Cancelled or Renewed Yet?

Veteran actress Lin Shaye is about to go all John Wick on us. The “Insidious” star will both star in and executive produce the six-episode action-thriller TV series “Ellen” for New Regency (“The Beast Must Die”) and QCode (“The Edge of Sleep”). The story will follow a nefarious land developer...
TV & VIDEOS・10 DAYS AGO
tvseriesfinale.com

Batwoman: Season Four? Has the CW Superhero Series Been Cancelled or Renewed Yet?

Airing on The CW television network, the Batwoman TV show stars Javicia Leslie, Rachel Skarsten, Meagan Tandy, Nicole Kang, Camrus Johnson, Victoria Cartagena, Robin Givens, and Nick Creegan. The show is based on the DC Comics character and initially revolved around Kate Kane (Ruby Rose), a strong woman who never planned to be Gotham City’s new vigilante — Batwoman. Kate disappeared and Ryan Wilder (Leslie) discovered her Batsuit and picked up the mantle. In season three, Ryan works to protect Gotham’s underserved communities and she and the Bat Team focus on finding Batman’s scattered trophies — a collection of objects seized from Gotham’s most infamous villains — before they land in pernicious hands. Ryan also struggles with the bombshell dropped by Alice (Skarsten), that her birth mother is still alive.
TV SERIES・10 DAYS AGO

A TV show based on the System Shock franchise was announced on Wednesday by the streaming platform Binge. The platform that leans towards gaming content announced that it's working with Nightdive Studios to create the new System Shock series and said that the project will be live-action as opposed to an animated one. Binge is set to launch in 2022 and will be accessible for free, but there's no indication yet of when this System Shock TV series will be available on the platform.
VIDEO GAMES・12 DAYS AGO
tvseriesfinale.com

DC’s Legends of Tomorrow: Season Eight? Has the CW TV Series Been Cancelled or Renewed Yet?

Airing on The CW television network, the DC’s Legends of Tomorrow TV show stars Caity Lotz, Nick Zano, Tala Ashe, Jes Macallan, Matt Ryan, Adam Tsekhman, Olivia Swann, Shayan Sobhian, Lisseth Chavez, and Amy Pemberton. The series follows a motley group of heroes and villains as they have misadventures across time and space in their stolen Waverider time-ship. In season seven, after saving 1925 Earth from an alien invasion (and getting married), Legends co-captains Sara Lance (Lotz) and Ava Sharpe (Macallan) think they and their crew can finally go home and relax. Unfortunately, their time travel ship gets blown up by a second Waverider, leaving the Legends trapped in 1925.
TV SERIES・10 DAYS AGO
asapland.com

Live-Action Series Hercules is in Production

Recently, Disney announced the news about the upcoming series Hercules. It is a remake of Disney’s Animated Hercules Series. Producer of Avengers End Game, Anthony and Joe Russo are producing the Live-Action Series Hercules. The original series was released in 1997. Here, we gather information about the Live-Action Hercules Production house details, Cast, and release date details.
TV & VIDEOS・12 DAYS AGO
GeekTyrant

Over the weekend, it was announced at DC FanDome that WB is releasing Smallville: The Complete Series 20th Anniversary Edition on Blu-ray! They also did a little celebration and reunion featuring a conversation with Tom Welling and Michael Rosenbaum, which you can watch below. They offer some fun and interesting insight that fans are sure to enjoy.
MOVIES・6 DAYS AGO

The CW is continuing to look abroad to solidify its schedule. The youth-skewing network has picked up Italian drama series Leonardo, starring Poldark’s Aidan Turner, and Australian comedy drama Bump. It comes after the broadcaster picked up Patrick Dempsey-fronted Italian series Devils as well as titles such as Canada’s Coroner and UK’s Dead Pixels. It also shares New Zealand comedy Wellington Paranormal, created by Taika Waititi and Jemaine Clement, with HBO Max. Created by The X-Files’ Frank Spotnitz and Sherlock’s Steve Thompson, the hourlong Leonardo explores the secrets and drama behind the genius of Leonardo da Vinci, played by Turner. The eight-part series...
TV SERIES・5 DAYS AGO
TVLine

As Smallville marks a full 20 years since its premiere, Tom Welling says that he now is in a “much happier” place when it comes to his relationship with the superhero origin series. Having struggled back in the day with his responsibility as the lead of the popular WB-turned-CW series (and the demands put on him), “As time goes on, I am enjoying Smallville more,” Welling shared in a new TVLine Q&A pegged to this Tuesday’s release of Smallville: The Complete Series on Blu-ray for the first time ever. “I wish I could go back [to my 2001 self] and just say,...
TV SERIES・7 DAYS AGO
TVLine

Stargirl's Meg DeLacy Previews Cindy's Return in Shadowlands Episode ('It Was Worth the Wait'), Unlikely Alliance

DC’s Stargirl has been wading in dark themes for much of Season 2, but in this week’s episode the superhero team-up series heads to a truly dark place — the Shadowlands, to which Cindy and now Courtney (among others) were dispatched by Eclipso. TVLine invited Cindy Berman aka Shiv’s portrayer, Meg DeLacy, to revisit the wild cafeteria fight that ultimately led to Cindy’s own date with “black tar goo” and then preview the unlikely alliance that might save both Cindy and Courtney (played by Brec Bassinger) in this Tuesday’s decidedly moody, black-and-white episode (airing at 8/7c on The CW). TVLINE |...
TV SERIES・6 DAYS AGO
spoilertv.com

Part 1 of the fourth and final season of Netflix’s Ozark has been given a premiere date. The new season will premiere January 23. The second part of the final season will be released at a later point. We have our first look at the upcoming eighth season of The...
TV SERIES・5 DAYS AGO
WKRG

Adding to our growing roster of scripted programing, The CW Network acquired two original series with the one-hour Italian drama Leonardo, starring Aidan Turner (“Poldark”, “The Hobbit”) in the titular role, and the hald-hour Australian comedy-drama, Bump, starring Nathalie Morris (“Almost Paradise”, “One Lane Bridge”), it was announced today by CW executives. Premiere dates and times of the series’ U.S. broadcast debuts will be announced at a later time.
TV SERIES・5 DAYS AGO