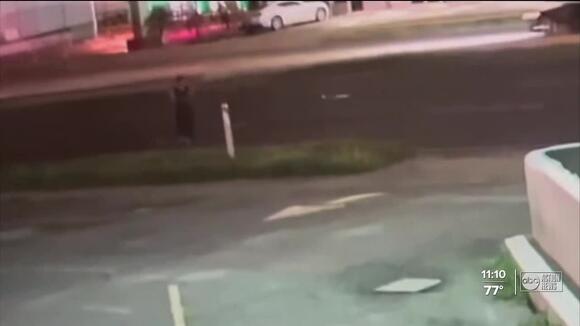 According to the FHP, the driver hit a 67-year-old woman who was walking in the travel lane along SR 580, or Hillsborough Avenue, east of Reflections Club Drive around 8:24 p.m. Troopers say the car collided with the woman and took off.

The agency says the woman was taken to the hospital but later died from her injuries. Both family members and the FHP identified the victim as Yinshu Jin.

Yinnu Jin, the victim's sister, spoke to ABC Action News and said she misses her so much.

"Why did somebody hit her then run? Why? No, stop and call the police or something? Why’d he run? I don’t understand," said Jin.

The vehicle appears to be a silver or gray passenger sedan. Troopers say, based on evidence recovered at the scene, the vehicle has front right damage and damage to the right headlamp.

Troopers ask anyone with information regarding this case to notify the Highway Patrol by calling 813-558-1800 or contact Crime Stoppers at 800-873-TIPS.

Tesla was going 116 mph at time of fatal crash

Florida State Troopers have filed felony charges against the driver of a Tesla who investigators say was driving nearly 120 miles an hour in a residential neighborhood when he allegedly crashed the car, killing two people and a dog.
FLORIDA STATE・1 DAY AGO
ABC Action News WFTS

A 21-year-old man in St. Petersburg is accused of shooting and killing two local mothers within days of each other earlier this year, according to police.
SAINT PETERSBURG, FL・1 DAY AGO

The Florida Highway Patrol said a 17-year-old student was seriously injured on Monday morning after he was hit by a car while walking to a bus stop.
HERNANDO COUNTY, FL・4 DAYS AGO
ABC Action News WFTS

No injuries were reported after a semi-trailer overturned in Lakeland Monday afternoon.
LAKELAND, FL・4 DAYS AGO

Winter Haven police have found a car matching the description of the one a missing man was last seen using.
WINTER HAVEN, FL・4 DAYS AGO
ABC Action News WFTS

Officials are seeing an increase in domestic violence cases in the Tampa Bay area and are urging victims to ask for help.
PINELLAS COUNTY, FL・3 DAYS AGO
ABC Action News WFTS

There’s a gaping hole in how police report and track missing people. The result is a hodgepodge of databases that can be problematic and out of date experts say. Investigative Reporter Katie LaGrone uncovers a solution Florida has yet to adopt fully.
LAW ENFORCEMENT・2 DAYS AGO
ABC Action News WFTS

Two people in custody after breaking into the Pinellas County Justice Center. Pinellas County Sheriff's Office Court Security called deputies at 8:34 p.m. about a break-in at the front entrance of the building at 14250 49th Street North in Clearwater.
PINELLAS COUNTY, FL・5 DAYS AGO

I-75 traffic to be detoured in Pasco Co. weekend of October 15

The Florida Department of Transportation said on Monday that part of I-75 in Pasco County will be detoured for certain times on the weekend of October 15.
PASCO COUNTY, FL・4 DAYS AGO
ABC Action News WFTS

One seriously injured after being hit by U-haul in St. Pete

A man was seriously injured after being hit by a U-haul Friday night.
TRAFFIC・7 DAYS AGO
ABC Action News WFTS