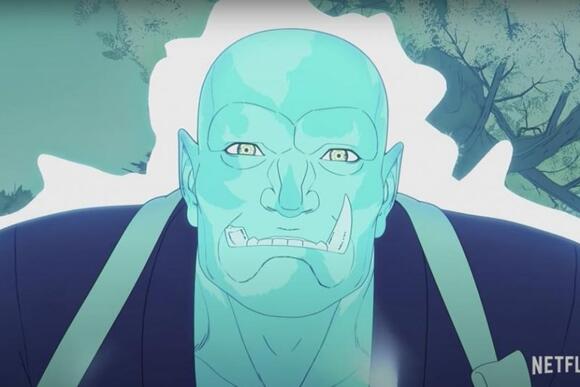 The streaming service shared a trailer for the anime film Tuesday featuring the voices of Simu Liu, Fred Mancuso and Yuzu Harada in the English dub.

Bright: Samurai Soul is a spinoff of the live-action Netflix film Bright, directed by David Ayer and starring Will Smith and Joel Edgerton. The new movie is set in Japan during the end of the Shogunate and the beginning of the Meiji era.

Samurai Soul follows Izo (Liu), a wandering samurai, and Raiden (Mancuso), an orc, as they attempt to bring a young elf girl (Harada) and the powerful wand she carries to the land of the elves.

The new film is written by Michiko Yokote and directed by Kyohei Ishiguro. The movie pairs the look of Japanese woodblock print art with 3DCG technology.

The original Bright was released in 2017 and has become one of Netflix's most-streamed movies ever.

Liu is known for playing Jung Kim on Kim's Convenience and the title character in the new Marvel film Shang-Chi and the Legend of the Ten Rings.

Everything coming to - and leaving - Netflix in November

Get ready for new seasons of "Selling Sunset" and "Tiger King," as well as holiday films like "The Princess Switch 3: Romancing the Star."
TV SHOWS・1 DAY AGO
Collider

Don't Miss: Amazon’s epic Black Friday deals started early this year and you won’t believe how good they are! Here’s the thing about the current configuration of Netflix’s Top 10 movies list for the US. Basically, if you’re looking for something new to watch on the streamer right now, and you’re especially looking for a movie, avoid the current Top 10 list like the plague. Let’s take a quick glance at the first five on that list, shall we? — we’ve got a Britney Spears documentary, a new horror movie (those are two different titles, by the way, I’m not referring...
MOVIES・23 DAYS AGO
UPI News

Oct. 19 (UPI) -- Disney+ is giving a glimpse of the new film Diary of a Wimpy Kid. The streaming service shared a trailer for the animated film Tuesday. The preview follows Greg Heffley as he navigates his first year of middle school alongside his best friend, Rowley Jefferson. The...
MOVIES・6 DAYS AGO

'Bright: Samurai Soul' Director Kyōhei Ishiguro on the Anime Spin-Off, Motion-Capture, and Expanding the World of the Original

With the anime prequel Bright: Samurai Soul now streaming on Netflix, I recently spoke with director Kyōhei Ishiguro about expanding the world of the 2017 David Ayer film. Unlike many prequel films, which try to heavily connect to the original and explain how we got there, Bright: Samurai Soul takes place hundreds of years earlier, on the other wise of the world. The film takes place in Japan during the 19th century, mixing Western fantasy tropes with Japanese sensitivities for a unique and thrilling action anime film. Whether you're a fan of the original, or just want a cool anime film full of gory action and orc violence, this is a film worth watching.
COMICS・7 DAYS AGO
gamespew.com

There’s no Bloodborne series in on the way, as far as we know at least, but this fan intro for an animated series based on the game is really something else. The short clip, created by artist Anthony Berardo, emulates Samurai Jack creator Genndy Tartakovsky’s emulation style and throws in appearances from a range of characters and beasties. If it wasn’t for all the blood, you could be forgiven for thinking it was Adult Swim’s own take on From Software’s gloomy game.
VIDEO GAMES・6 DAYS AGO
/Film

The Summit Of The Gods Trailer: Acclaimed Manga Becomes A Gorgeous Animated Film

Animation has long been a medium that somehow never quite received its due from Western audiences and artists. There's a unique freedom of creativity, form, and style that animation affords in a way that live-action simply isn't equipped to — and that applies to adult-minded storytelling just as much as it does to children's cartoons. So leave it to this fusion of a critically acclaimed Japanese manga adaptation and a French animator-turned-director to remind us of what 2D animation truly has to offer. After receiving a live-action feature film adaptation distributed by Toho in 2016, the manga series written and illustrated by Jirô Taniguchi and based on author Baku Yumemakura's 1998 novel now comes to (animated) life with "The Summit of the Gods."
COMICS・3 DAYS AGO
TVOvermind

How Bright: Samurai Soul Can Start A New Series

If you’re an owner of Netflix, you might have watched the 2017 urban fantasy action movie Bright. Just in case you didn’t, here’s a little spoiler alert: it wasn’t that good. Well, it wasn’t as bad as some of the critics made it out to be, but it wasn’t nearly as good as it could’ve been. Just like many movies, this one began with a unique and creative idea, but the execution was a bit of a misfire. Personally, I really dug the idea, given that I’m a big fantasy nut. And I should probably mention that the stars of Bright were Will Smith playing a Los Angeles police officer partnered with the first orc to join the LAPD. The orc, named Nick Jakoby, was played by the underrated Joel Edgerton. Their performances were good and the world they were set in reflected issues that are still relevant to this day. For instance, living in a fantasy-based world with magical creatures, the orcs were largely considered to be dangerous monsters and often lived in crime-infested ghettos. With Jakoby joining the force, you can imagine not too many humans were happy about it. Bright intended to explore realistic issues like racism, poverty, and police corruption, and it scratched the surface. I think it fell short with exploring the fantasy element that turned so many viewers to it.
TV & VIDEOS・4 DAYS AGO

The fourth Animation is Film (AIF) festival opens tonight with the North American premiere of the Netflix film The Summit of the Gods, an examination of an obsessive mountain climber. The streamer released the trailer today. The screening will be followed by an in-person Q&A with award-winning writer-director Patrick Imbert...
MOVIES・3 DAYS AGO
UPI News

Oct. 25 (UPI) -- Lee Sun-kyun stars as a genius neuroscientist who can navigate through other people's memories in the new trailer for upcoming Apple TV+ drama, Dr. Brain. Sun-kyun portrays Sewon in the clip, who is accessing the memories of the dead to find out what happened to his family following a mysterious and tragic accident.
TV & VIDEOS・18 HOURS AGO
Deadline

EXCLUSIVE: With his latest film The Harder They Fall bowing in theaters today, Emmy-nominated actor Jonathan Majors isn’t looking to slow down anytime soon. He is now set to star in Magazine Dreams, the new bodybuilding drama from Elijah Bynum. Bynum is writing and directing, with Majors also set to serve as an executive producer on the project under his Tall Street Productions. The script was included on the 2020 Black List. The film follows an amateur bodybuilder who struggles to find human connection in the exploration of celebrity and violence. Nightcrawler producers Jennifer Fox and Dan Gilroy are on board to produce....
MOVIES・3 DAYS AGO
UPI News

LOS ANGELES, Oct. 25 (UPI) -- Actors Brittany Adebumola and TL Thompson say The CW's reboot of 4400, premiering Monday, allowed them to reflect on history. In the sci-fi mystery drama, Shanice (Adebumola) and Dr. Andre Davis (Thompson) are among 4,400 people who disappear at various points in time and return simultaneously in 2021.
TV SERIES・1 DAY AGO

Animated Oscar Contender ‘Belle: The Dragon and the Freckled Princess’ Spins a VR ‘Beauty and the Beast’

One of this year’s animated Oscar contenders could be veteran Mamoru Hosoda’s dazzling Cannes debut “Belle: The Dragon and the Freckled Princess” (Studio Chizu, GKids), inspired by the French “Beauty and the Beast” fairy tale, about rural school kids who take on alter egos in a digital universe, based on their strengths and weaknesses. “Belle” could mark the filmmaker’s second animated feature Oscar nomination after “Mirai.” The movie screens October 23 at Hollywood’s Animation Is Film festival before its later Oscar-qualifying GKids release. Hosoda updates the 18th-century fairy tale that has spawned countless movie adaptations, from Jean Cocteau’s 1946 black-and-white French...
MOVIES・2 DAYS AGO
Insider

If you blink, you may miss these very subtle details hidden in horror films like "The Shining," "The Silence of the Lambs," "Us," and "Hereditary."
MOVIES・18 HOURS AGO
Variety

Amid the questions about what Grammy categories Halsey belongs in with her increasingly alternative-leaning music, there’s at least one division where she’ll likely be in contention that cuts across all genres: best music film. She starred in and wrote “If I Can’t Have Love, I Want Power,” a 50-minute film that premiered in IMAX theaters Aug. 26 and had its streaming bow on HBO Max Oct. 7. The movie tells a narrative about a expectant queen who falls afoul of her country’s ruling class, with plenty of interstitial silences — pregnant pauses, if you will — and a few bits...
MOVIES・15 HOURS AGO
HOLAUSA

What to watch for Halloween: The best shows and movies on streaming platforms

There’s still some time to set the mood for Halloween, but if you need some help we know just where to watch the best movies and series, streaming this spooky season. Starting with the fan-favorite Netflix show ‘Midnight Mass,’ created by Mike Flanagan, and centered around mysterious creatures and...
TV & VIDEOS・17 HOURS AGO
IndieWire

In “Ron’s Gone Wrong,” the first animated feature by UK-based Locksmith Animation (in theaters only from Disney/20th Century Studios), the titular malfunctioning robot (voiced by Zach Galifianakis) and socially awkward middle-schooler Barney (voiced by Jack Dylan Grazer) struggle to understand the difference between interpersonal and virtual friendship. Thus, for director Sarah Smith (Aardman’s “Arthur Christmas”) and screenwriter Peter Baynham (the “Borat” movies and “Arthur Christmas”), this high-tech, boy-and-his-dog coming-of-age story was an opportunity to explore the impact of social media on children. “It is very much about the process to curate yourself and put some image of yourself out there,” said...
TV & VIDEOS・9 HOURS AGO
The Hollywood Reporter

Anna Kendrick, William Jackson Harper and more hit the red carpet at New York City’s DGA Theater for the world premiere of Love Life season two on Sunday. The second season of HBO Max’s anthology series switches its focus from Kendrick’s Darby Carter — who led season one — to Harper’s Marcus Watkins, who is forced to rebuild his life after his marriage unexpectedly implodes and leaves him hoping to find a love that will last. “We really put our character through the wringer this year,” co-showrunner and executive producer Bridget Bedard told The Hollywood Reporter during Tribeca Film Festival’s Fall Preview...
TV SERIES・8 HOURS AGO