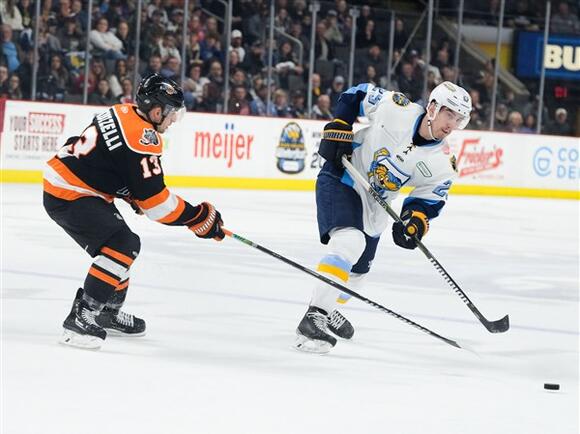 Defenseman Blake Hillman, who played in 35 games for the Toledo Walleye in 2019-20, is returning to the organization.

In 2019-20, he split time between Toledo, Grand Rapids, and Stockton. He played in 35 games for the Walleye and produced 13 points (1 G, 12 A) and eight penalty minutes. Hillman also played 12 games at the American Hockey League level, five with the Griffins and seven with the Heat.

“He quietly goes about his business on the ice,” Watson said. “He will be counted on for his leadership, his intelligence, and his steady play. We can expect Blake to play against opponents' top lines and anchor our penalty kill.”

Hillman was selected in the sixth round of the 2016 draft by the Chicago Blackhawks out of the University of Denver. He made his professional debut by skating in four games for the Blackhawks at the end of the 2017-18 season. He collected his first pro goal on April 4, 2018, at St. Louis.

In his three years at the University of Denver, he skated in 123 games and finished with seven goals, 24 assists, and 84 penalty minutes.

Single-game tickets are on sale. For more information go to toledowalleye.com.

In today’s NHL rumors rundown, the Los Angeles Kings might be getting good news after what looked like a serious injury to defenseman Drew Doughty. Meanwhile, the status on a Vladimir Tarasenko trade seems to change weekly. How long will he be staying with the St. Louis Blues? The Ottawa Senators seemed to have dismissed rumors that they’re looking to add a top-nine center to their group and there were plenty of scouts at the Blackhawks game on Thursday, many of them likely checking in on Dylan Strome.
NHL・1 DAY AGO
holycitysinner.com

The South Carolina Stingrays, proud ECHL affiliate of the NHL’s Washington Capitals and AHL’s Hershey Bears, have agreed to terms with defenseman Victor Hadfield for the 2021-22 season. “I am super excited to get down to Charleston,” says Hadfield. “I have heard a lot about the city and the team,...
NHL・13 DAYS AGO
WGN Radio

The Colorado Avalanche signed defenseman Jack Johnson to a one-year, $750,000 deal Sunday per Sportsnet’s Elliotte Friedman. Johnson was previously with the team on a professional tryout contract. Johnson likely stands as a seventh defenseman and/or a waiver candidate later in the year, especially on a team as deep as...
NHL・14 DAYS AGO

The Nashville Predators announced today the signing of Mattias Ekholm to a four year contract extension. The deal for the defenseman is for $25 million and will keep him in Nashville through the 2025-26 season.
NHL・11 DAYS AGO
WGR550

Ever since this started, we’ve known that the Sabres have wanted Peyton Krebs in any trade for Eichel with the Vegas Golden Knights. Krebs was the Golden Knights first pick in 2019
NHL・18 DAYS AGO
MISportsNow

TOLEDO, Ohio — One of the new faces on the Toledo Walleye roster is John Albert and he's a really interesting story. He's a veteran and he brings a ton of experience to the table. He's played in over 300 games at the AHL level and he's played in nine NHL games as well.
NHL・9 DAYS AGO

BOSTON (WHDH) - The Boston Bruins have signed star defenseman Charlie McAvoy to an eight-year contract extension worth $76 million, the team announced Friday. The 23-year-old blueliner’s new deal is the richest in team history and will pay him an average of $9.5 million per year. The annual cap hit...
NHL・9 DAYS AGO
NHL

The Pittsburgh Penguins have re-assigned defenseman P.O Joseph to the Wilkes-Barre/Scranton Penguins of the American Hockey League, it was announced today by general manager Ron Hextall. Joseph, 22, attended Pittsburgh's training camp and played in three preseason games. The 6-foot-2, 185-pound defenseman played 16 games for Pittsburgh in his first...
NHL・7 DAYS AGO
warriorscentral.com

The Golden State Warriors made a pair of roster moves today designed to fill out the roster for their G-League team, the Santa Cruz Warriors. The waiving of Quindarry Weatherspoon happened just one day after the signing of Quinndary Weatherspoon, and we can safely predict that LJ Figueroa will spend a similarly short amount of time on the training camp roster. That's because a G League roster has slots for four "affiliate players.
NBA・10 DAYS AGO
Sportsnaut

Will Johnny Gaudreau re-sign or be traded by the NHL Trade Deadline?

With the Calgary Flames out of a playoff spot last season, NHL trade rumors were swirling around that Johnny Gaudreau was available for a trade. Pierre LeBrun was on TSN 1050 and reports that the Flames and Gaudreau’s camp have had contract discussions throughout the summer and no deal could be worked out.
NHL・8 DAYS AGO
Pioneer Press

The Vikings re-signed wide receiver Dan Chisena on Tuesday. He was waived last Saturday when they needed a roster spot. The Vikings had two open roster spots with cornerbacks Cameron Dantzler and Harrison Hand on the COVID-19 reserve list. They had one spot open last Saturday, but they waived Chisena because they had to have two spots open in order to elevate both cornerback Parry Nickerson and guard Dakota Dozier to the active roster as COVID-19 replacements for Sunday’s 19-17 win over Detroit.
NFL・12 DAYS AGO
NBC Chicago

The Chicago Blackhawks are aiming to get back into the playoffs after missing the postseason last year, but their two longest-tenured players could find themselves in elite company if they have big individual seasons. Patrick Kane is preparing for his 15th NHL season, which will see the puck drop on...
NHL・13 DAYS AGO
Virginian-Pilot

The Norfolk Admirals hit the ice tonight at Scope for the club’s first game since the 2019 season — a layoff of nearly 600 days. Here’s what you need to know: What’s new? The Admirals announced a new affiliation this summer with the NHL’s Carolina Hurricanes. The Raleigh, North Carolina, franchise welcomed the ECHL Admirals to a development system that includes its top affiliate, the Chicago ...
NHL・2 DAYS AGO

Bruce Gradkowski and Eric Page never shared a football field together in college or the NFL. That ends Friday when the University of Toledo icons are on opposite sidelines at Gallagher Stadium as St. Francis de Sales and Central Catholic play for the Irish Knight Trophy.
TOLEDO, OH・2 DAYS AGO
San Diego Union-Tribune

The Golden State Warriors re-signed veteran guard Gary Payton II. Payton inked a one-year deal at the veteran minimum with a partial guarantee. Payton had been waived by the Warriors on Sunday and cleared waivers on Tuesday. By waiving and re-signing Payton, the Warriors lowered his cap hit. Due to...
NBA・4 DAYS AGO