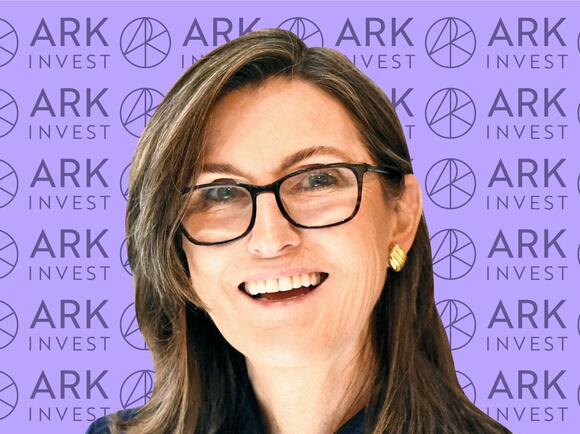 Ark Invest CEO Cathie Wood called Tesla boss Elon Musk a visionary, described SEC chief Gary Gensler as a hardcore regulator, and revealed what it would take for her firm to step up investments in China, in a recent interview with CNBC anchor Andrew Ross Sorkin.

In the SALT conference interview, she also predicted bitcoin would surge to $500,000 within five years if companies continue to diversify their cash into the cryptocurrency and institutional investors allocate 5% of their funds to it.

Here are Wood's 13 best quotes from the interview, lightly edited and condensed for clarity:

1. "He's a visionary and he sees the future so clearly." - the longtime Tesla bull's comment on the company's CEO Elon Musk.

2. "I'm really happy he understands crypto and understands the merits of bitcoin in particular. He is a regulator, though, and he is a hardcore regulator." - on Gary Gensler, the chair of the Securities and Exchange Commission, who is pushing to regulate crypto exchanges more closely.

3. "I think I'd default still to bitcoin because countries are now deeming it legal tender ." - her cryptocurrency of choice, if she could own just one.

4. "Our confidence in ether has gone up dramatically as we've seen the beginning of this transition - from proof of work to proof of stake. We'd still probably do 60% bitcoin, 40% ether." - on the potential for ether.

5. "If we're right and companies continue to diversify their cash into something like bitcoin, and institutional investors start allocating 5% of their funds, we believe that the price will be ten-fold of where it is today. So instead of $45,000, over $500,000." - on the potential value of bitcoin in five years' time.

6. "I do believe that both crypto and the equity markets are going to be powered by millennials." - on the upcoming demographic boost to stocks as millennials mature.

7. "I'd be shocked if it goes away. I agree with the General Counsel because it has been so good for zero-commission trading and so forth." - on the SEC's potential ban of Robinhood's payment for order flow system.

8. "I do believe there's a chip shortage because the world's going digital. I believe chips are the new commodities. Chips are going to be what Dr. Copper has been in the industrial world." - on disruption in the auto industry.

9. "I don't think it's a very friendly place for capital now. However, China has, in its various five-year plans, made innovation an incredibly important plank. And so we don't want to avoid it. But what we do want to avoid is very-high-margin companies." - on Ark Invest reducing its exposure to Chinese equities.

10. "It would be saying, 'Whoops, we made a mistake, we're open for business.' I don't think he (Xi Jinping) will do that. So I don't think we'll be hugely involved with China." - talking about the prospects for a reversal in China's policy when asked what it would take for her to invest more there .

11. "When I heard the CEO tell his story, my smile went ear-to-ear because I said, 'Man, this is gonna be so explosive.' This is how I felt when the internet first came about." - her reaction to hearing about Async Art, a NFT platform for programmable art.

12. "We're going to see more creative destruction than we have in all history during the next five to 10 years." - on how tech innovation can disrupt existing industries in a deflationary way.

13. "We're completely devoted to nothing else but disruptive innovation. We see explosive growth."

Read More: Will bitcoin boom or bust in El Salvador? 7 sharply divided experts share their views - and one mega-bull even calls for bitcoin to go over $1 million thanks to a 'chain reaction' of adoption.

Jones, the founder and chief investment officer of Tudor Investment Corporation, told CNBC he has crypto in single digits in his portfolio.
ECONOMY・7 HOURS AGO
Markets Insider

The cryptocurrency market is the "most honest market we have in the country," the venture capitalist Peter Thiel said, according to The Information.
MARKETS・5 HOURS AGO
bitcoin.com

SEC Chairman Gary Gensler has shared why the U.S. Securities and Exchange Commission (SEC) decided to approve a bitcoin futures exchange-traded fund (ETF) to trade on the NYSE. Meanwhile, the Commission has not approved a spot bitcoin ETF. Why SEC Approves Bitcoin Futures ETF. As the first futures-based bitcoin exchange-traded...
MARKETS・22 HOURS AGO
Markets Insider

Morgan Stanley analysts said they have a $200 billion bull-case valuation for SpaceX - double what it is worth today.
AEROSPACE & DEFENSE・3 HOURS AGO

"Your first block reward? Block 705742 was mined about 3 hours ago, around the same time the tweet was tweeted," one Twitter user speculated.
MARKETS・8 HOURS AGO
GOBankingRates

Stock Watch: If SpaceX Could Make Elon Musk a Trillionaire Should You Invest?

Ahead of Tesla's earnings later today, Morgan Stanley analysts say that Elon Musk will become a trillionaire. But it will be thanks to his other company, SpaceX. See: Elon Musk's SpaceX Valuation Hits...
ECONOMY・7 HOURS AGO
Markets Insider

Icahn reacted to an Insider report that he missed out on $40 billion by selling Apple and Netflix stock, saying he always cashes out early.
STOCKS・1 DAY AGO
Interesting Engineering

Bitcoin's continued growth in recent weeks has sent many enthusiasts declaring this moment as history in the making, and on Tuesday, October 19, they will be vindicated. ProShares is launching a long-awaited exchange-traded fund (ETF) on the New York Stock Exchange tied to Bitcoin futures, according to an initial report from The New York Times.
MARKETS・1 DAY AGO
Markets Insider

Stronghold Digital Mining derives much of its crypto mining power generation from coal refuse sites in Pennsylvania.
STOCKS・4 HOURS AGO

Burry warned that crypto is in a speculative bubble, but he's bullish on blockchain technology and sees value in NFTs beyond the digital art world.
STOCKS・1 DAY AGO
Markets Insider

The overall demand for BITO was likely from a combination of investment advisors, private banking clients, and funds shorting the ETF, Vanda said.
RETAIL・9 HOURS AGO
Markets Insider

The majority of cryptocurrencies are 'garbage' and only a few will emerge as winners, says Guggenheim's Scott Minerd

70% of crypto coins 'will go away,' the CIO of Guggenheim Partners said in a Bloomberg interview from the Milken Conference.
MARKETS・1 DAY AGO
WPRI 12 News

Bitcoin stormed above $66,000 for the first time on Wednesday, riding a wave of excitement about how the financial establishment is increasingly accepting the digital currency's rise.
STOCKS・4 HOURS AGO
mix929.com

No Elon Musk Show during this Tesla quarterly call

SAN FRANCISCO (Reuters) – Tesla Inc CEO Elon Musk did not participate in the company’s earnings conference call for the first time on Wednesday, making him one of the rare top executives in the United States to miss the quarterly ritual of talking to Wall Street. Musk’s popularity among investors...
BUSINESS・1 HOUR AGO
torquenews.com

Elon Musk has advised Warren Buffett to invest in Tesla if he wants to increase his diminishing wealth. Musk has also pointed the finger at Bill Gates for shorting Tesla and possibly influencing Buffett to not invest in the EV maker. After the recent run-up in Tesla’s stock price, Elon...
STOCKS・2 DAYS AGO