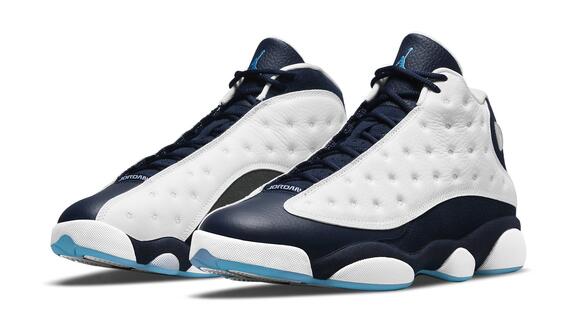 Jordan Brand is giving the popular Air Jordan 13 a new makeup this fall.

After unveiling the latest style in June as part of the fall ’21 Air Jordan Retro lineup, the sportswear brand confirmed via the Nike SNKRS app that the Air Jordan 13 “Obsidian” will release before week’s end in sizes for the entire family. The Michael Jordan signature shoe features a premium white tumbled leather that’s offset by dark blue underlays and tongue. The model’s standout design is the holographic jewel by the ankle collar, a Zoom Air-cushioned midsole, and a light blue rubber outsole.

The Air Jordan 13 silhouette was designed by industry veteran Tinker Hatfield and made its debut on the basketball courts in November ’97 when Michael Jordan was in pursuit of his sixth and final NBA championship with his Chicago Bulls squad before ultimately winning the title against the Utah Jazz while wearing the Jordan 14.

Two beloved Nike Air Max Penny 1 styles appear to be making a comeback in 2022. Instagram users @Bubblekoppe and @zSneakerheadz shared release details this week revealing that NBA legend Anfernee “Penny” Hardaway’s first signature shoe with the Swoosh is returning next year. Given its far-out drop date, images of the forthcoming releases have yet to surface but the sneaker leak social media accounts confirmed on the caption that the shoe will return in the “White/Varsity Royal/Black” and “Black/Varsity Royal/White” colorways, which match up with the shoe’s iconic “Home” and “Orlando” makeups. The aforementioned account also shared images of the previous Air Max...
APPAREL・3 DAYS AGO
Footwear News

Kendall Jenner is getting in the Halloween spirit in a sneakerhead-approved way. The model served up a fall-themed photo dump on Instagram earlier this week, showing off her Jack-o-Lanterns, autumnal decorating and a pair of rare sneakers to tout. The recognizable Nike Dunk Lows pay homage to Freddy Kreuger of “A Nightmare on Elm Street” with blood-splattered overlays and striped uppers inspired by the character’s signature attire. With silver accents to portray Kreuger’s bladed hands, the sneaker also comes complete with insoles that echo the villain’s scarred figure. View this post on Instagram A post shared by Kendall (@kendalljenner) While Jenner modeled the...
DESIGNERS & COLLECTIONS・3 DAYS AGO
Footwear News

Spike Lee switched his signature sneakers for a more formal shoe in New York City this week. While attending a New York Knicks basketball game against the Boston Celtics, the “Do The Right Thing” director took a different shoe route with orange velvet Louis Vuitton smoking slippers. The slip-on pair featured almond-shaped toes and yellow embroidery of wings surrounding an “LV” logo. Lee coordinated his footwear with an orange and blue beaded necklace, as well as a black velvet fedora, to match the Knicks’ team colors. The round-toe loafers featured a curved vamp with dipping edges and a flat block heel in...
NBA・2 DAYS AGO
soapboxmedia.com

Michael Jordan has committed to its Black Community Commitment by giving more than $1 million in grants to 18 change-focused grassroots organizations. “These 18 organizations put action over words every day to make their communities a better place,” Jordan says in a statement. “Each of these groups has demonstrated the courage to make a difference at the local level and I could not be more proud to support the work they are doing.”
NBA・12 DAYS AGO

One of the best Air Jordan 11 colorways of all time was the "72-10" model which was meant to commemorate the Chicago Bulls' historic season in the 90s. The shoe had a very basic look to it, although sneakerheads didn't seem to care as it was the perfect shoe for hardcore Michael Jordan fans. After all, MJ fans love shoes that are specific to his accomplishments, and these kicks were able to fit that bill. While the shoe hasn't been released in quite some time, it will be getting an interesting update next year.
BEAUTY & FASHION・14 DAYS AGO
hotnewhiphop.com

One of the most colorful holidays of the year is Easter. While it is technically a religious holiday, most people take it as an excuse to load up on chocolate and wear pastel colors that look good with certain types of shoes. Sneaker brands are always excited for Easter, as it allows them to get created with some brand new colorways and designs. Case in point, @zsneakerheadz has just come through on Instagram with a teaser of a new Easter colorway that has been placed on the iconic Air Jordan 5.
APPAREL・9 DAYS AGO
sneakernews.com

Designed exclusively for kids, the Nike Air Max 95 Recraft takes the shoe’s most beloved features and distills it down to smaller sizes. Here, we see the variant take the shelves yet again, appearing with just a touch of “Wheat.”. More than appropriate for the Fall season, the colorway leads...
APPAREL・17 DAYS AGO
sneakernews.com

The Air Jordan 11 CMFT Low has received quite a bit of love in the past few months. Following a Quai 54 collaboration and Michigan-inspired colorway is but another standout, this one dressed subtly with the iconic “Barcelona” graphic. By comparison, the exterior is no less bold, proffering a look...
APPAREL・14 DAYS AGO

The 20 Best Travel Shoes, According to a Podiatrist and Travel Blogger

When you’re headed out of town, one of the more important tasks on your to-do list is packing. Not only do you want to pack smart (as little as you can with only the most versatile of pieces), but you want to make sure you’re bringing the right footwear. What to consider when packing shoes for travel Even if you’ve got a strong hold on your itinerary, it’s difficult to know what shoes will serve you best. The fewer shoes you bring the better — just ask travel blogger Jennifer Chan, who’s mastered the art of strategically only packing a carryon. “Always wear...
TRAVEL・1 DAY AGO
sneakernews.com

As it heads into its 25th anniversary, the Air Jordan 13 has begun appearing in compelling colorways following original color-blocking. For its latest proposition, the model has borrowed its low-top version’s 1998 “Navy/Carolina Blue” colorway for an expected release during Summer 2022. Akin to that aforementioned style, the newly-rumored pair...
APPAREL・19 DAYS AGO
snntv.com

Originally Posted On: https://kanopy.store/blogs/news/dropping-this-october-air-jordan-3-pine-green. First introduced to the public in 1988 when Michael Jordan won the Slam Dunk contest at the NBA All-Star Game in a pair of White-Cement Grey’s, the Air Jordan 3 has been one of the most popular models for the brand. These were the shoes that...
APPAREL・12 DAYS AGO
GolfWRX

Pat Perez and his lavish obsession with Air Jordans

If you follow Pat Perez at all on his social media, his love for the Air Jordan brand will become apparent pretty quickly. This love affair, which has evolved into the Phoenix native having a dedicated Jordan shoe room full of over 1,000 pairs, had humble beginnings: the first Jordans Pat got his hands on were a beat-up pair out of a trash can in high school.
APPAREL・5 DAYS AGO

First released on October 4th, 2000 The Air Jordan VI Midnight Navy Retro has instantly become one of the most sought after Air Jordan VI retros, thanks to its classic silhouette and a solid colorway. SNEAKERS. The Air Jordan 6 “Midnight Navy” 2021 was initially scheduled to debut on Black...
BEAUTY & FASHION・4 DAYS AGO
Footwear News

Carmelo Anthony will suit up for his 19th season in the NBA tonight with his new Los Angeles Lakers team and he also has a new pair of kicks for the special occasion. As first reported by Bleacher Report’s BR Kicks on social media, Jordan Brand has created a special iteration of the Air Jordan 1 Low for the longtime sponsored athlete. According to the outlet, the style dubbed “Baltimore Crab” was made exclusively for Anthony. The shoe pays homage to the 37-year-old forward’s Baltimore roots with a color scheme that resembles a crab. The exclusive sneaker features a brown-based nubuck upper...
NBA・5 DAYS AGO
Cincinnati Business Courier

Mortar is one of 18 organizations nationwide to receive funding from Michael Jordan and Jordan Brand's inaugural Black Community Commitment Grant Program. The Jordan Brand grants program provides micro-funding awards to grassroots nonprofit organizations with a total operating budget under $3 million, a proven track record of success and demonstrated paths to sustainable change. A total of $1 million was distributed to 18 organizations with missions rooted in social justice, economic empowerment and education and awareness.
NBA・13 DAYS AGO
Footwear News

Celebrities Love These Reebok Sneakers — And You Can Buy Them Now

When it comes to performance footwear — like cross-training or weightlifting shoes — experts agree Reebok makes some of the best pairs. But just because the famed German brand is known for its sport-driven styles doesn’t mean its lifestyle silhouettes are any less noteworthy. In fact, both everyday and A-list shoppers can’t seem to get enough of them. In addition to being backed by glowing customer reviews, iconic Reebok shoes like the 80s-inspired Club C, Classic Leather, FreeStyle Hi and Workout Plus are frequented by celebrities. More modern iterations like the futuristic-looking Sole Fury shoes have also been getting attention lately....
DESIGNERS & COLLECTIONS・3 DAYS AGO
Footwear News

The 40 Best Gifts For Sneakerheads That Aren’t Just Sneakers

Sneakerhead is a relatively new term, but the concept is simple. A sneakerhead is a sneaker enthusiast, someone who knows about shoes, learns about shoes, and participates in the distribution and consumption of the ever-moving sneaker world. There are levels of fandom, to be sure. You can be a casual sneakerhead and know a lot about the construction of a shoe and the brand histories, or just really love a specific style of sneaker you stay loyal to. There’s also the sneakerhead who knows the minute and location of every new sneaker drop, exactly what’s getting updated and how much they...
BEAUTY & FASHION・3 DAYS AGO
Footwear News

The most anticipated shopping holiday of the year is just around the corner. While Amazon Prime Day, Nike Air Max Day and Labor Day are in the running, nothing quite touches the retail readiness of Black Friday weekend. But what exactly is Black Friday and where did it come from? For a quick history lesson, Black Friday was coined in 1966 and refers to the Friday after Thanksgiving that officially kicks off the holiday shopping season. It’s when consumers would take off work to get a jumpstart on their shopping, and was (and still is) one of the most profitable...
SHOPPING・4 DAYS AGO
TMZ.com

Ex-Portland Trail Blazers president and current Jordan Brand chairman Larry Miller is sharing his darkest secret with the world ... admitting he killed a man when he was 16 years old, and hid it from his closest friends -- including Michael Jordan -- until recently. Miller detailed the September 1965...
NBA・11 DAYS AGO
sneakernews.com

Air Jordan 1 Mid colorways are rarely few and far between. In the past few months, for example, we’ve already received handful of reveals, each quite different from last. And here, with its latest GS pair, the silhouette can’t decide between color and neutrals — instead, it opts to mix the two together.
CARS・9 DAYS AGO