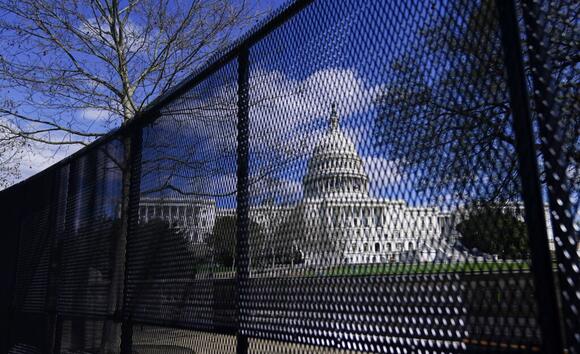 In a shock survey likely to draw even more attention to this weekend’s “Justice for J6” rally, nearly half of voters believe those charged in the Capitol riots are political prisoners.

According to the latest Rasmussen Reports survey, 49% said that those jailed for violence and other charges are being held as “political prisoners.” Some 30% “strongly” agree.

Notably, 45% of Democrats agree that the more than 500 arrested are political prisoners.

Asked to agree or disagree with this statement: “The Department of Justice and the FBI have targeted, imprisoned, and persecuted non-violent American patriots,” 48% agreed, and 46% disagreed.

The findings are surprising considering the general negative media coverage of the pro-Trump riots that led to the U.S. Capitol Police killing of one protester, Ashli Babbitt, as she tried to enter the House floor.

The survey comes in advance of the weekend "Justice for J6" rally, when about 700 are expected to speak out in support of those arrested and targeted in the protest described as an “insurrection” and worse than 9/11 in the liberal media.

Organizer Matt Braynard, executive director of Look Ahead America, told Secrets that he has emphasized to attendees that the rally will be peaceful and focused only on those caught up in the riot. He expects 700 to attend the event that will feature speeches, videos, and patriotic songs.

Opponents, however, have warned that the event could turn violent, and the police have responded by encircling the U.S. Capitol again in fencing.

YES THEY ARE!! AND THEY ARE ALL INNOCENT! put the real criminals in prison, Pelosi, sorts, Obama, Biden, faith, capitol police!!

I don’t know who they surveyed but I don’t believe this at all! God! What is this country coming to?

A student at the University of Idaho reported strange footprints that were found near her home located less than a mile away from the off-campus house where four students were killed last month.
1 DAY AGO
WashingtonExaminer

Social Security update: Direct payments worth $1,631 to be sent out to millions in 11 days

People who receive Social Security benefits will get their next monthly retirement payments, which are worth an average of $1,631 per check, in 11 days.
1 DAY AGO
WashingtonExaminer

Tennessee residents who are eligible for the state’s Families First Program can expect to see an extra $500 payment this month, with checks expected to arrive by the end of this month.
1 DAY AGO
Toby Hazlewood

Marjorie Taylor-GreenePhoto byGage Skidmore, United States of America, CC BY-SA 2.0 via Wikimedia Commons. On December 2, the House of Representatives passed a series of bills intended to provide help for pregnant veterans and those who have just given birth. The bill - HR 2521 - received bipartisan support in the House, and will now pass to the Senate for voting having exceeded the required two-thirds majority.
1 DAY AGO
TheDailyBeast

In a sign of the times for Vladimir Putin’s twisted Russian regime, a regional governor has been backed by the State Duma after saying the “descendants of African-American slaves” are to blame for the country’s growing crisis. Vadim Shumkov, governor of the Kurgan region, said Russian...
3 DAYS AGO
WashingtonExaminer

Georgia police have arrested a man suspected to have shot a teenager outside his home on Thursday.
2 DAYS AGO
Newsweek

Russian Foreign Minister Sergei Lavrov made a surprise admission at his annual news conference in Moscow on Thursday.
3 DAYS AGO
WashingtonExaminer

Meghan Markle, the Duchess of Sussex, and Prince Harry dropped the first preview for their Netflix documentary series Thursday, coinciding with Prince William and Kate Middleton's first visit to the United States in eight years.
2 DAYS AGO
The Center Square

(The Center Square) - Two former Arizona political candidates will have to pay legal fees due to a failed lawsuit. A U.S. District Court Judge in Phoenix ordered Kari Lake and Mark Finchem to pay the costs Maricopa County incurred while defending itself in court against the candidates in the case Lake v. Hobbs. Lake was the Republican nominee for governor this year, while Finchem ran for Secretary of State. ...
2 DAYS AGO
Business Insider

Lara Trump will no longer be a paid contributor for Fox News after her father-in-law, Donald Trump, announced his 2024 presidential bid.
18 HOURS AGO
WashingtonExaminer

Stimulus update: Deadline to receive direct payments worth up to $4,000 is just two days away

Residents of Jacksonville, Florida, have just two days left to submit their applications in order to be eligible to receive financial assistance to help pay rent or utility bills.
1 DAY AGO
WashingtonExaminer

Average Joe: How Manchin could be just days away from losing his Senate power

Centrist Sens. Joe Manchin (D-WV) and Kyrsten Sinema (D-AZ) could see their outsize influence over the party wither away after two years of claiming make-it-or-break-it status over the Democrats’ agenda.
1 DAY AGO
CNN

Americans should not just consider how the Supreme Court's decision to overturn Roe v. Wade impacts women's rights, but also how it affects individuals' civil rights, Anita Hill said in an interview with CNN's Chris Wallace.
2 DAYS AGO
WashingtonExaminer

Stimulus update: Debit card payments worth up to $1,050 being sent out in California

The state of California is continuing to send out direct payments of up to $1,050 to residents as part of its program to offer Californians relief from rising prices due to high inflation.
1 DAY AGO
WashingtonExaminer

Curfew enacted in North Carolina after gunfire leaves 45,000 without power

A gunfire attack on two power stations in North Carolina Saturday night resulted in 45,000 losing power and a mandated curfew across an entire county.
8 HOURS AGO
WashingtonExaminer

A county sheriff in Arkansas was arrested Saturday after he was found in possession of drugs and guns.
17 HOURS AGO
WashingtonExaminer

Kennedy Center Honors to take place Sunday recognizing George Clooney, U2, and others

Anita Hill recalled her testimony in front of the Senate Judiciary Committee as she accused then-Supreme Court nominee Clarence Thomas of sexual harassment as “surreal,” pointing to the lack of precedence at the time as a daunting experience.
1 DAY AGO
WashingtonExaminer

The hosts on The View shared their thoughts Friday on the Netflix documentary surrounding Prince Harry and his wife Meghan, the Duchess of Sussex.
1 DAY AGO