Alexis Ohanian shows off $280,000 NFT he purchased for Serena Williams at 2021 Met Gala 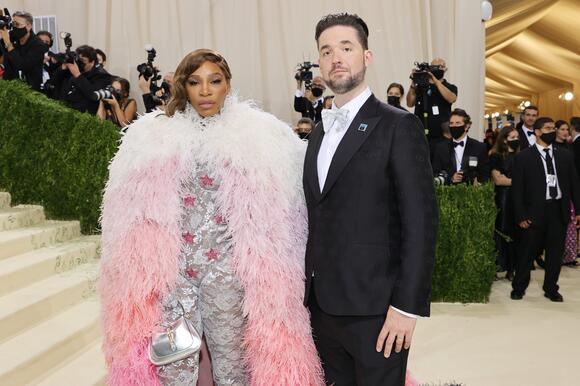 Alexis Ohanian showed his support for wife Serena Williams during the 2021 Met Gala by being her date, and by wearing a $283,000 NFT inspired by the tennis star on the lapel of his tuxedo.

On Monday, the couple was photographed posing on the red carpet at the Met Gala, with Williams wearing a lace full-length bodysuit and pink and black feathered cape by Gucci while the Reddit founder opted for a simple black tuxedo.

According to Ohanian’s Twitter account, he accessorised his look with a small NFT badge from the CryptoPunks collection that depicts his wife, and which he purchased for her.

“Decided to bring a #Cryptopunk of my wife (that I bought for her) to the #MetGala ,” the tech entrepreneur captioned photos of the pair, including a close-up of the badge.

NFTs, or non-fungible tokens, are unique assets stored on the blockchain, with Mashable noting that the NFT of Williams is “among the rarest, and most expensive NFTs you can own” as it is part of the CryptoPunks collection.

Ohanian’s sweet gesture comes after the founder of venture capital fund Seven Seven Six previously shared his belief that the rise of NFTs and the trading card boom is “going to be HUGE for women’s sports”.

“I’ve invested big in women’s sports, but the rise of NFTs and trading card boom is going to be HUGE for women’s sports,” he tweeted in March 2021, adding that he thinks women investing in the market will “change the game”.

On Monday night, Ohanian also shared another photo of himself and Williams from the Met Gala, which he revealed was their favourite picture because the tennis pro said he resembled their four-year-old daughter Olympia Ohanian.

“Ok this is our favourite pic because @serenawilliams says I look like @olympiaohanian ,” he captioned the photo of the pair posing on the red carpet.

The couple’s arrival at the high fashion event came after Williams revealed that her daughter had referred to her as a “monster” while she was preparing for the gala with a hydrating face mask.

“She can’t call me a monster now,” Williams joked on her Instagram Stories as she had her makeup done before the event. “It looks like the mask worked.”

Why do they let Hollywood make fools of them. Now why would anyone put on a shaggy carport and be proud of it, "oh let me guess"> Hollywood said it looked good . NO IT DOESN'T LOOK GOOD ON A PERSON BECAUSE IT BELONGS ON THE FLOOR.

Her outfit maybe expensive and a designer outfit, but (not in this shot), it is unforgiving and not flattering at all. It makes her look chunky and she’s not, she’s muscular. Some of the other outfits were also unattractive, bizarre and frankly, ridiculous. I’m sure they cost a lot, but money can’t by taste. That being said some were stunning - Ciara and Billie Eilish being two of them.

Wasted use of funds. this doesn't scream fashion it says my husband has no taste and I didn't want to hurt his feelings!

Lauren Sánchez has spoken candidly about the hardest parts about being in a relationship with billionaire Amazon founder Jeff Bezos.Sánchez, 53, who has been publicly dating Bezos, 59, since January 2019, opened up about the realities of their high-profile relationship in a new interview with WSJ Magazine, which marked her first solo interview since the couple went public.According to Sánchez, who acknowledged that she is a “very open person,” her relationship with the entrepreneur has meant that she has had to change the way she shares information, and secrets.“It’s hard. I’m a very open person. I talk a lot....
2 DAYS AGO
brides.com

When Prince Harry and Meghan Markle announced that they were expecting their first child together (who would later be named Archie) on October 15, 2018, the public couldn’t contain their excitement. But before the Duke and Duchess of Sussex shared the news with the world, they revealed the information to the royal family. In his new memoir, Spare, Harry opens up about the first time the couple broached the subject with their relatives. Harry writes in his novel that he and Meghan had planned on starting a family after they tied the knot in May of 2018. They learned they were expecting a few months later, so they decided to tell members of the royal family at Princess Eugenie’s wedding on October 12, 2018.
11 HOURS AGO
The Independent

John Legend has shared his first photo celebrating the arrival of his and Chrissy Teigen’s newborn daughter, Esti Maxine.The singer first announced the birth of his fourth child with Teigen at a private concert on 13 January, before the model shared the news with the rest of the world.In his own Instagram post on Thursday (26 January), Legend shared a photograph of him cradling Esti in his arms as he beams at the camera.He wrote in the caption: “Our new love.”Commenting on her husband’s latest post, Teigen gushed: “Eeee I love her.”The arrival of the couple’s new daughter comes...
1 DAY AGO
GoldDerby

It looks like Kim Kardashian and Tristan Thompson‘s friendship is going strong. The SKIMS founder, 42, and 31-year-old NBA pro were spotted heading to North West‘s basketball game together in Los Angeles on Friday, Jan. 27. They didn’t appear to be in conversation with one another, as Kim walked a few steps of the ex-boyfriend of her younger sister, Khloe Kardashian. They kept it casual, with Tristan donning black sweats and a black hoodie, and Kim wearing a red sports jersey by Diadora, and Italian sportswear company.
LOS ANGELES, CA・19 MINUTES AGO
New York Post

Julia Fox apologized Friday for misinterpreting a TikToker’s coded reference to sexual assault. The 32-year-old “Uncut Gems” star left a troubling comment on user Conor Whipple’s video, in which he claimed he was sexually assaulted. Because of TikTok’s censorship of certain words and phrases, Whipple chose to speak in slang, so his clip would not get removed — substituting “mascara” for “sex.” “Gave a girl mascara, and it must have been so good that she decided that her and her friend should both try it without my consent,” he wrote this week on the video, along with the tag #saawareness, which...
25 MINUTES AGO
The Independent

Taylor Swift’s fans are convinced her newly released “Lavender Haze” music video contains a subtle yet intentional Joe Alwyn Easter egg.An early scene in the Grammy-winning artist’s music video, showing a vinyl cover with a printed image of a Pisces and Sagittarius constellation, has gone viral on Twitter.Many Swifties have noted the Sagittarius symbol corresponds with Swift’s birthday (13 December), while the Pisces refers to her boyfriend Alwyn’s birthday (21 February).“Joe is a Pisces and Taylor is a Sagittarius… what if I told you Taylor’s a mastermind,” one explained.A second commented: “They appear on a vinyl cover of Mastermind...
7 HOURS AGO
The Independent

A dress worn by Diana, Princess of Wales has been sold for nearly half a million pounds in an auction at Sotheby’s New York salesroom.The “Infanta”-style strapless purple evening gown, by Victor Edelstein, which Diana wore in a royal portrait in 1991, was bought on Friday for 604,800 dollars (£488,15) at the curated auction The One.Sotheby’s said the final bid was five times the pre-auction estimate of 80,000-120,000 dollars (£66,153-99,230).It was a record-breaking day #SothebysNewYork!LeBron James' game-worn jersey achieved $3.7M, breaking the previous record for a jersey of the athlete's by more than 5x.Our Princess Diana Gown reached $604k, sealing...
NEW YORK STATE・7 HOURS AGO