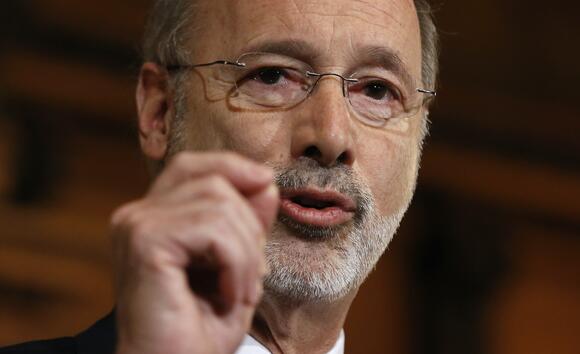 Pennsylvania Gov. Tom Wolf said he would recall his Senate nomination for secretary of the commonwealth due to the "bad faith" actions by Republicans attempting to audit the 2020 presidential election results.

Wolf decided to pull Veronica Degraffenreid's nomination as a result of the Senate Republicans' "capitulat[ing] to Donald Trump's fantasy that the 2020 election experienced irregularities that changed the outcome in Pennsylvania," arguing the chamber is incapable of holding impartial hearings on the nominee.

"It is clear that instead of providing advice and consent on my nominee for Secretary of the Commonwealth, they instead plan on using her confirmation as an opportunity to descend further into conspiracy theories and work to please the former president [Donald Trump] by spreading lies about last year's election, instead of working together to address real issues facing Pennsylvanians," Wolf said in a statement on Monday.

The governor said that based on the Senate Republican majority's pursuit of the former president's claims of fraud during the 2020 election, "it is clear that Veronica Degraffenreid will not receive a fair hearing from this Senate on her merits."

Republican Senate President Pro Tempore Jake Corman responded by saying the caucus members "are under no obligation to honor that request" to recall the acting secretary's nomination.

"The acting secretary's threats against counties and her refusal to participate in bipartisan election hearings will be considered by the Senate Republican Caucus as we plan how to proceed with her nomination," Corman added.

Wolf added in his statement that there were no irregularities and no fraud in the election, a statement that has been backed by the Trump administration's Justice Department. President Joe Biden won Pennsylvania against former President Donald Trump by just over 80,000 votes, although some GOP lawmakers have pushed for an election review, echoing Trump's claims of voting irregularities despite officials' assurances that the election was secure.

The Intergovernmental Operations Committee for the state Senate will convene on Wednesday at the insistence of Corman to vote on whether it should subpoena the State Department for documents and testimony regarding election administration practices.

Corman has blamed the department, led by former Secretary Kathy Boockvar until February, for giving contradictory and confusing guidance to county officials in the buildup to the election that caused a disparate application of rules across Pennsylvania.

"We have the constitutional responsibility to provide advice and consent, not to be a rubber stamp for the administration," Corman said. "There would not be a need for many of these hearings if they did their jobs fairly and honestly."

In July, voting machines in Pennsylvania's Fulton County were decertified after local officials complied with a Republican-backed audit and permitted a third-party contractor to access data. Degraffenreid concluded the ballot hardware was "compromised," adding that the "actions were taken in a manner that was not transparent."

Threats of subpoenas to the department follow months of internal debate about how to commence an Arizona-style forensic audit in Pennsylvania, a move that was led by Arizona Senate President Karen Fann in February to ensure the election was managed properly in the state's populous Maricopa County.

The election review in the Grand Canyon State, which has been criticized by Democratic Secretary of State Katie Hobbs and members of the mostly Republican Maricopa County Board of Supervisors as a partisan endeavor, could produce a full draft report this week.

I’d say that there might be plenty of indication of voter fraud when Governor Wolf of PA can’t even win his own county- twice!! Hummmm!

Divisions among Democrats on key issues like infrastructure could help the former president's prospects.
PRESIDENTIAL ELECTION・22 HOURS AGO
Business Insider

State Sen. Doug Mastriano, who pushed false claims about the 2020 election, said, "I guess I shouldn't call it a 'vaccine.'"
PENNSYLVANIA STATE・10 HOURS AGO
The Guardian

Michigan Republicans are quietly moving to replace officials on key elections panels in the state with candidates who have embraced conspiracy theories about the last election, a move that could cause significant chaos in the counting of votes in the 2024 election and beyond. Some of the people being nominated...
PRESIDENTIAL ELECTION・1 DAY AGO
blogforarizona.net

The “Sore Loser Man” in exile in Florida was ranting and raving yesterday, like the insane sociopath that he is, after a Georgia judge dismissed a lawsuit alleging voter fraud in 2020 presidential election:. A Georgia judge on Wednesday dismissed a lawsuit against members of Fulton County’s election board, ruling...
PRESIDENTIAL ELECTION・1 DAY AGO

HARRISBURG, Pa. (AP) — An endorsement by former President Donald Trump in Pennsylvania’s hotly contested U.S. Senate race isn’t backing down rival Republicans, with one putting up millions for her campaign and another getting a seven-figure pledge from a donor. Carla Sands, Trump’s ambassador to Denmark, loaned her campaign $3...
PRESIDENTIAL ELECTION・21 HOURS AGO
Washington Post

Republicans for Voting Rights, an organization operating under the Defending Democracy Together, has launched a quarter-million-dollar campaign to erect dozens of these billboards in major markets across the country.
PRESIDENTIAL ELECTION・1 DAY AGO

A far-right activist who hosted a podcast went public with a fantastical claim just weeks ahead of the 2020 election. Driving the news: Colorado’s Joe Oltmann says he listened to a phone call hosted by left-wing "antifa" activists in September 2020. On the call, Oltmann purports that security director Eric...
COLORADO STATE・1 DAY AGO
The Independent

Donald Trump has become the favourite to win the election in 2024, as Joe Biden falls behind the former US president and faces challenges with his domestic agenda. Mr Trump, according to betting odds, had been ahead in the race for the Republican nomination in 2024 but had not been on odds for a win in the election.However, recent odds byBetfair Exchange found Mr Trump is now 4.8 to win in 2024. Mr Biden, meanwhile, was at 5.1 after falling behind his own vice president, Kamala Harris, in the presidential tie-up. Although neither Mr Trump nor Mr Biden have...
PRESIDENTIAL ELECTION・1 DAY AGO
NBC News

WASHINGTON — In the last 24 hours, Virginia’s contest for governor has suddenly turned into a story about Donald Trump. And that’s become great news for Democrat Terry McAuliffe and bad news for Republican Glenn Youngkin. It all began when Trump called into a Steve Bannon-headlined event Wednesday in Virginia...
VIRGINIA STATE・1 DAY AGO
MSNBC

The Republican Party doesn't have a platform. Or a policy agenda. Or substantive issues it's eager to work on. Or compelling leaders who are ready to govern. What defines the contemporary GOP — the one thing that animates the party more than anything else — is an unshakable belief in a ridiculous lie about Donald Trump's 2020 defeat. The former president boasted at an Iowa rally this past weekend, "It's the single biggest issue, the issue that gets the most pull, the most respect, the biggest cheers is talking about the election fraud of the 2020 presidential election."
POTUS・2 DAYS AGO

The latest letter helps establish a paper trail for what could be a serious executive privilege fight. Biden's stance: President Joe Biden's counsel, Dana Remus, on Friday declined to grant executive privilege to shield an initial batch of Trump-era documents sought by congressional investigators probing the Jan. 6 attack. The former president pushed back, asserting broad privilege, and Remus replied in the negative on Wednesday.
PRESIDENTIAL ELECTION・2 DAYS AGO
The Press

Voting in Pennsylvania this year: What to know about mail-in voting, register deadlines

Pennsylvanians have until Monday to register to vote in the Nov. 2 municipal election that will see voters decide local races and pick statewide judges. State residents can register online and update their voter records with any changes to their names or addresses, acting Secretary of State Veronica Degraffenreid said earlier this week. Polls will be open from 7 a.m. to 8 p.m. on Nov. 2 in Pennsylvania.
PENNSYLVANIA STATE・2 DAYS AGO
kelo.com

(Reuters) – Josh Shapiro, Pennsylvania’s Democratic attorney general and a high-profile critic of Republican former President Donald Trump and his false election fraud claims, on Wednesday formally entered the 2022 race for governor of the crucial battleground state. Shapiro, who has for months indicated he would likely run for the...
PENNSYLVANIA STATE・3 DAYS AGO

(JTA) — Josh Shapiro, the Pennsylvania Attorney General who made national headlines last year pushing back against attempts to reverse Joe Biden’s win in the state, is running for governor of the state. Shapiro, a Democrat who has deep roots in the Jewish community, made the long-expected announcement on Monday,...
POLITICS・5 DAYS AGO
MyNorthwest.com

The Washington State Democrats’ Chair, Tina Podlodowski, voted for former President Donald Trump, selling out the very Democrats she says she represents. I wasn’t at the Seahawks game last week, but I hear she tried to attend in a bedazzled MAGA hat. She’s that big of a fan. Some in the crowd were unhappy, and she later abandoned the game to join a group of pro-life counter-protesters at this weekend’s abortion rights rally.
WASHINGTON STATE・5 DAYS AGO
Business Insider

A timeline of Donald Trump's efforts to overturn the 2020 election

Former President Donald Trump began sowing doubt in the 2020 election months before votes were cast. After he lost to Joe Biden, Trump tried several methods to overturn the results of the vote. A new Senate report released Thursday details how the president and his allies undermined democracy. A bombshell...
PRESIDENTIAL ELECTION・8 DAYS AGO
Gazette

Virginia gubernatorial nominee Glenn Youngkin is chiming in with other prominent Republican-backed calls to execute election-related audits, tying his background in business to justify pursuing an examination of the commonwealth's voting machines. "I think we need to make sure that people trust these voting machines," Youngkin said at a Monday...
VIRGINIA STATE・8 DAYS AGO