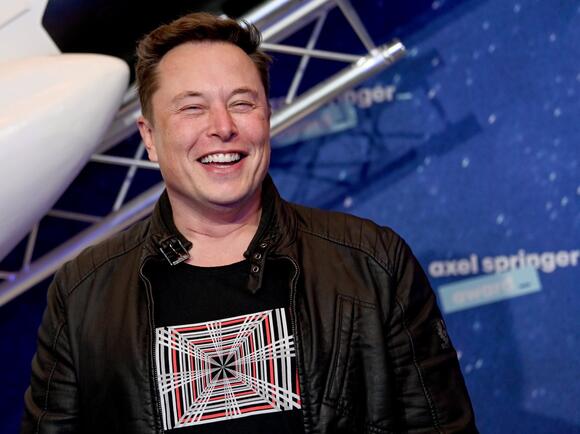 SpaceX and Tesla CEO Elon Musk was a cause of a spike in the cryptocurrency space again after naming his dog after an obscure coin.

On Monday, the Floki Inu currency reached an all-time high when the technology mogul tweeted a photo of his Shiba Inu puppy with the phrase “Floki has arrived.”

Other alternative coins with similar names, such as Floki Shiba and Super Floki, experienced a 150 per cent price increase.

Despite the significant price increases, none of them are among the top 2,000 most valuable cryptocurrencies, according to the CoinMarketCap price index.

It’s not the first time that throwaway actions by the entrepreneur have had knock-on effects on the crypto exchanges. Musk has also helped propel Dogecoin to new record highs during his performance on Saturday Night Live earlier this year.

Sign up to our free Indy100 weekly newsletter ‘The Viral Democracy’

The world’s most famous meme-based money was founded in 2013 as a parody of bitcoin’s expanding cryptocurrency industry.

It was inspired by the Shiba Inu Doge meme and quickly acquired popularity as a result of the fun-loving and altruistic community that grew around it.

Musk, a self-described ‘meme connoisseur’, took interest in the phenomenon and even purchased some for his infant son X A-Xii so that he might be a “toddler hodler.”

Speaking to Clubhouse in a Q&A session at the beginning of the year, Musk spoke on the Dogecoin market’s controversial aspects and said that he will, on rare occasions, poke fun at the crypto, but it’s just “meant to be jokes.”

According to the Bloomberg Billionaires Index, Musk is the world’s second wealthiest person, with a net worth of approximately $200 billion.

Outside of shares in SpaceX, Tesla, and his other businesses, the only other assets he claims to have are Dogecoin, Ethereum (ether), and bitcoin.

It’s safe to say that Musk has quite the influence on all things crypto.

Tesla CEO Elon Musk took a jab at older lawmakers, tweeting that there should be an upper age limit for anyone planning to run for political office.
ECONOMY・1 DAY AGO
Benzinga

In a recent video Randi Zuckerberg, the sister of Mark Zuckerberg, the CEO of Meta Platforms Inc (NASDAQ:FB), pointed out the sudden flourishing of meme coins in the crypto market. Introducing the Shiba Inu (CRYPTO: SHIB) as the Dogecoin (CRYPTO: DOGE) killer, Randi said that the token has gone mainstream.
MARKETS・19 HOURS AGO
Vulture

Twitterverse has done it once again, gifting America the dazzling crossover of glove meme, unstable nerd, and Mickey Mouse Club reject. You know who’s who. On November 13, Bernie Sanders tweeted to the people, “We must demand that the extremely wealthy pay their fair share. Period.” (We must demand you, 80-year-old Vermont senator, always end your sentences like a quirky Gen-Z TikToker. Period.) Elon Musk swooped in ready to assert his dominance. Strapped with his phallic-looking profile photo, Tesla master struck back at Bernie: “I keep forgetting you’re still alive.” Weeks later, Musk’s tweet still wasn’t sitting right with Courtney Love Cobain, so she tweeted some claims about Elon’s shady Succession-like undertakings. “@elonmusk you know your str8, male, PayPal mafia email group? I was on bcc for MONTHS on that thing [teapot emoji] With that information in mind, don’t you think in a “civilized society” one should embrace paying our fair share of tax? Don’t pick on Bernie. It’s Kendall Roy shit.”
CELEBRITIES・1 DAY AGO
The Motley Fool

Crash? What Crash? This Cryptocurrency Just Replaced Dogecoin and Shiba Inu As a Top 10 Token

Investors in Terra Luna now have the honor of owning a top-10 cryptocurrency.
STOCKS・12 HOURS AGO

When Elon Musk says jump, most say "how high"-but now's the time to be critical.
STOCKS・10 HOURS AGO
Daily Mail

Elon Musk officially owns no homes: Tesla CEO sells off lavish Silicon Valley estate for $30 million - $7.5M lower than its asking price - as he downsizes to $50K rental to fulfill his pledge made last year to 'own no home'

The world's second richest man has fulfilled his pledge to 'own no home.'. Tesla and SpaceX CEO Elon Musk has sold his Silicon Valley estate for $30 million on Thursday, $7.5 million less than the original $37.5 million asking price when it was first listed in June, according to records. He struggled to sell the home, listing it three times before finding a buyer.
REAL ESTATE・1 DAY AGO
MarketWatch

Tesla’s $1,900 ‘Cyberquad’ EV for kids sold out, restocked and sold out again

Elon Musk has fulfilled his pledge made last year to “own no home.”
REAL ESTATE・1 DAY AGO

The latest SpaceX launch of Starlink internet satellites into orbit has broken the private space firm’s own record for the number of rocket launches in a calendar year.The Falcon 9 flight, which lifted off from Cape Canaveral Space Force Station in Florida on Thursday, marked the 27th successful launch for Elon Musk’s company in 2021.The payload of Starlink satellites also means Musk now controls more than 36 per cent of all active satellites in orbit, according to data from CelesTrak.SpaceX’s Starlink project aims to establish a vast network of table-sized satellites around the Earth in order to beam high-speed...
AEROSPACE & DEFENSE・2 DAYS AGO
techstartups.com

Elon Musk is still halfway through his pledge even after selling 10.1 million Tesla shares for nearly $11 billion

On November 6, Elon Musk launched a Twitter poll asking millions of his fans if he should sell 10% of his stake in Tesla to pay billions in tax liability. About 24 hours later, 58% of Twitter poll respondents said Musk should sell 10% of his Tesla stock. Musk abided by the results and started selling millions of Tesla stocks.
STOCKS・1 DAY AGO
Axios

Here's how insanely rich Elon Musk is: He has unloaded $10 billion of his stock in the past month — and could do that 15+ more times given his silos of shares. Musk ranks No. 1 on the global Bloomberg Billionaires Index, with a net worth of $284 billion. What's...
MARKETS・2 DAYS AGO
Markets Insider

Tesla CEO Elon Musk has sold another 934,091 shares of the electric-vehicle maker worth $1.01 billion to meet his tax obligations related to the exercise of options to buy 2.1 million shares, regulatory filings showed Thursday. In early November, the world's richest person tweeted that he would sell 10% of...
STOCKS・2 DAYS AGO

Elon Musk and Jeff Bezos have sold just shy of $20 billion of their companies' shares between them so far this year, as stock sales by CEOs and insiders soar to a record high. Musk has now offloaded $9.9 billion worth of stock in electric-vehicle maker Tesla, after selling a $1.05 billion chunk at the end of November.
STOCKS・2 DAYS AGO
MySanAntonio

At this point, Musk has sold about $10.9 billion worth of Tesla stock since asking if he should in a Nov. 6 Twitter poll. In the Twitter post, Musk proposed selling 10% of his Tesla stock because "much is made lately of unrealized gains being a means of tax avoidance." After 57.9% of netizens polled approval, the billionaire seems to be making good on his promise to abide by the results of the poll.
STOCKS・1 DAY AGO
Indy100

Elon Musk says you shouldn’t be allowed to run for office once you’re ... 69

Elon Musk believes that an age limit should be set for people who want to run for political office - and it’s a very meme-worthy 69. On Thursday, the Tesla and SpaceX CEO took to his Twitter to address his thoughts about political qualifications. “Let’s set an age limit after...
ECONOMY・2 DAYS AGO
The Independent

Elon Musk has cited the 1970s video game Pong in order to reassert his belief that our perception of reality is in fact a hyper-realistic computer simulation.Responding to a tweet about Pong posted by a popular engineering trivia account, the SpaceX and Tesla boss said that the advancement in graphics and gameplay in the years since it was released implies that humanity is on a path to create digital worlds indistinguishable from the real world.“49 years later, games are photo-realistic 3D worlds,” the billionaire wrote. “What does that trend continuing imply about our reality.”Musk has previously said that he...
TECHNOLOGY・4 DAYS AGO
SFGate

It was tweeted this week that Elon Musk's company, SpaceX, was at risk of bankruptcy according to a leaked email from Musk to his employees. On Tuesday, the businessman replied from his personal account on Twitter that although it is a very low possibility that he will go bankrupt, it is still possible.
AEROSPACE & DEFENSE・3 DAYS AGO
Engadget

The Morning After: Elon Musk’s whistle has already sold out

If there’s one thing we should all admire about Elon Musk, it’s his knack for helping folks part with their hard-earned cash. Tesla yesterday launched , a $50 whistle designed with the same angular lines as its forthcoming Cybertruck. The company is happy to explain that the Cyberwhistle is a “premium collectible” hewn from medical-grade stainless steel. Sadly, not long after Musk tweeted a link to the , the whistle sold out, but there’s hope another round will be available at some point in the future. Or, if you’re really, desperately in need of one of these, you can find pre-orders being scalped for around $300.
RETAIL・3 DAYS AGO
Interesting Engineering

Elon Musk Presents: The New $50 'Cyberwhistle' Was Sold Out in Hours

Tesla CEO Elon Musk introduced the company's latest merchandise on Twitter: a stainless steel whistle called the "Cyberwhistle". And it was sold out in a few hours, Business Insider reported. The "premium collectible", as Tesla calls it on its website, is made out of medical-grade stainless steel and joins the...
ECONOMY・4 DAYS AGO
notebookcheck.net

Elon Musk unveils the Tesla Cyberwhistle, a US$50 Apple parody that is already selling for 5x its list price

Elon Musk and Tesla have revealed the Cyberwhistle, a whistle modelled on the Cybertruck. In a nod to Apple's expensive cleaning cloth, the Cyberwhistle costs US$50. It has also sold out less than 24 hours after it went live on Tesla's website. Earlier today, Ellon Musk announced a new Tesla...
ELECTRONICS・3 DAYS AGO