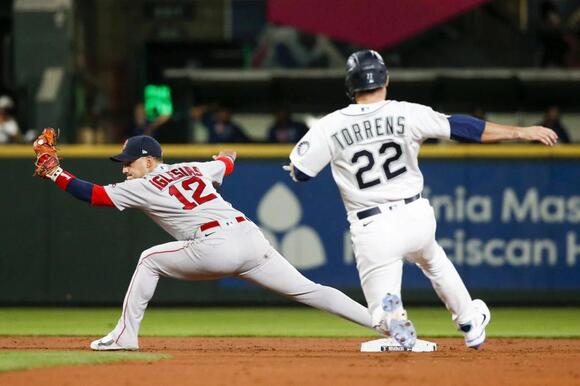 Mitch Haniger clubbed a tiebreaking, three-run home run in the seventh inning to lift the Seattle Mariners over the visiting Boston Red Sox 5-4 on Monday night in the opener of a three-game series.

Haniger’s 33rd homer of the season, against Red Sox reliever Ryan Brasier (0-1), made it 5-2 with two outs. After Brasier coaxed a pair of fly outs to start the inning, Jake Bauers reached on a fielding error by Boston first baseman Kyle Schwarber and advanced to second on J.P. Crawford’s single.

Xander Bogaerts and Rafael Devers hit back-to-back solo homers with two outs in the eighth to pull Boston within a run. Devers’ homer was his team-leading 34th while Bogaerts hit his 21st.

Mariners reliever Diego Castillo (4-5) earned the win after striking out two in a scoreless seventh. Seattle rookie starter Logan Gilbert matched a season high with nine strikeouts over six innings of two-run ball. He yielded five hits and one walk.

Drew Steckenrider tossed a 1-2-3 ninth to record his ninth save.

Seattle (78-66) had lost four of its past six games but improved to 8-4 over its past 12 games. The Mariners moved within two games of the Red Sox and the New York Yankees for the final American League wild-card spot. 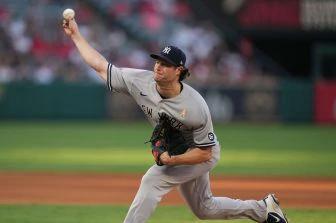 Boston (81-65) has dropped six of its past eight. The Red Sox began the day in a statistical tie with Toronto for the top AL wild card but fell one game behind the Blue Jays and into a tie with the Yankees.

Jose Iglesias also had a solo home run and two RBIs for the Red Sox. Boston starter Eduardo Rodriguez allowed two runs (one earned) on six hits with one walk and six strikeouts over six innings.

Groundouts by Ty France in the first and Tom Murphy in the second plated runs to stake the Mariners to a 2-0 lead. Iglesias hit his ninth homer in the third and added a fifth-inning RBI single to tie it.

The New York Yankees flamed out of the 2021 MLB postseason after getting wrecked by the Boston Red Sox in a 6-2 American League wild-card game loss at Fenway Park on Tuesday. The Yankees crashing and burning against their fiercest rival and despite a luxurious payroll only add fuel to an offseason that’s going to have them answering plenty of questions, including whether the team’s future would still include veteran outfielder Brett Gardner — at least until the end of the 2022 MLB season.
MLB・19 DAYS AGO
NJ.com

The internet never forgets. Former New York Yankees slugger Alex Rodriguez has been covering the 2021 MLB playoffs by resuming his role as a studio analyst for FOX Sports. Last week, Rodriguez was analyzing the American League Division Series between the Boston Red Sox and Tampa Bay Rays with David Ortiz, Frank Thomas and Kevin Burkhardt. The gang was discussing a video clip from Game 1, when the Rays were seen eating popcorn in the dugout during the seventh inning of their 5-0 win.
MLB・12 DAYS AGO
MassLive.com

A play made by Red Sox ball girl Camille Desrochers impressed Fenway fans and Houston Astros alike during during Game 5 of the ALCS. “There was a righty on the bat and I was like, ‘Well if it comes this way, I’m going to be ready to get it,” Desrochers told 7News. “And I just saw it, saw the umpire call foul, of course, wouldn’t want to touch a fair ball.”
MLB・3 DAYS AGO

Carlos Correa is going to get paid. It’s just a matter of how much the two-time All-Star will be offered. Correa headlines a bumper crop of free-agent shortstops, which also includes the Los Angeles Dodgers’ Corey Seager, Colorado Rockies’ Trevor Story and New York Mets’ Javier Baez. So what will...
MLB・11 DAYS AGO
MassLive.com

HOUSTON — Kiké Hernández ran down Yordan Alvarez’s 409-foot fly ball to right-center field in the first inning. He was there to make the catch, but he didn’t. The ball hit off the inside of his glove and dropped to the grass. The official scorer ruled it an RBI double and it put the Astros ahead 1-0.
MLB・2 DAYS AGO
Larry Brown Sports

Jose Altuve was targeted by Boston Red Sox fans with a profane chant during Game 3 of the ALCS at Fenway Park on Monday night. Red Sox fans could be heard chanting, “f— Altuve” during Game 3. The chants began early in the game, according to reporters in attendance. The chants continued even in the third inning after Altuve was unable to pick a throw that bounced into second while covering the bag.
MLB・7 DAYS AGO
Empire Sports Media

It’s still early in the offseason for the New York Yankees. The World Series will begin on Tuesday, between the Houston Astros and the Atlanta Braves, and the Bombers, once again, have to see it on TV. But that doesn’t mean they can’t start to make some preliminary plans with the 2022 campaign in mind.
MLB・11 HOURS AGO

The motto of the 2021 Boston Red Sox team must be “No Fear” since that is what this club has demonstrated all season and is continuing in the playoffs. This team will fight tooth and nail on every pitch, on every at-bat, on every play to try to win and just won’t quit. To sum up that attitude, it’s they have absolutely “No Fear”.
MLB・7 DAYS AGO
USA TODAY

Kyle Schwarber became a perfect fit in Boston, and he’s hopeful to stay with Red Sox: ‘This is a World Series clubhouse’

HOUSTON — Kyle Schwarber seemed like an imperfect fit when the Red Sox acquired him at the trade deadline. But three months later, he wound up being their perfect match. Two wins away from an improbable World Series berth, the Red Sox lost three consecutive games to the Astros, falling in Game 6 of the American League Championship Series with Friday night’s 5-0 loss. But they likely wouldn’t have got there without Schwarber, whose bat and leadership made a huge difference despite not having a natural positional fit on the roster.
MLB・2 DAYS AGO
chatsports.com

The Boston Marathon was rescheduled for Monday, but the Boston Red Sox and Tampa Bay Rays decided go the distance on Sunday. With the ALDS tied, 1-1, the clubs battled through a 13-inning staredown in Game 3 until Red Sox catcher Christian Vázquez crushed a walk-off two-run homer to win it, 6-4.
MLB・14 DAYS AGO

If you thought this postseason run was giving you 2018 World Series vibes, the Boston Red Sox will share another similarity in their 2021 campaign. The American League Championship Series is set between the Red Sox and Houston Astros, who on Tuesday defeated the Chicago White Sox to advance to their fifth consecutive battle for the pennant. The series begins Friday in Houston, and teams will have until that morning to submit their roster for the seven-game set.
MLB・13 DAYS AGO
Walla Walla Union-Bulletin

When he was first acquired by the Mariners on that night before Thanksgiving in 2016, Mitch Haniger was a quiet but intense player who rarely answered questions beyond a few sentences and was reluctant to open up about much of anything, particularly himself or his accomplishments on baseball. But with...
MLB・9 DAYS AGO
SB Nation

The Red Sox were saved by an obscure rule before walk-off homer vs. Rays

The Tampa Bay Rays and Boston Red Sox are playing an intense best-of-5 ALDS series after battling it out in a historically strong AL East all season long. The Rays entered the playoffs as the favorites in the AL after making the World Series last season and hitting 100 wins for the first time in franchise history during this regular season. The Red Sox earned their way into the ALDS by winning 92 games during the regular season and beating their forever rival the New York Yankees in the Wild Card game.
MLB・14 DAYS AGO

The story behind the Red Sox' 2021 playoff anthem

If you tuned in for the Boston Red Sox' celebration after their series-clinching win over the Tampa Bay Rays, you were treated to quite the spectacle. As bottles were popped and champagne was sprayed, the team danced and sang along in unison to a song you probably wouldn't expect. That jam was Boston's latest playoff anthem, "Dancing On My Own" by Calum Scott and Tiesto. A remake of Robyn's 2010 hit.
MLB・10 DAYS AGO
Audacy

The Red Sox took a 2-1 lead in their best-of-five series lead with the Rays thanks to Christian Vazquez's walk-off two-run homer in the 13th inning, giving the Sox a 6-4 win Sunday night. The home run came after a controversial top half of the 13th inning. Kevin Kiermaier smoked...
MLB・14 DAYS AGO
Gloucester Daily Times

BOSTON — For several minutes, nobody knew what was going on. Kevin Kiermaier appeared to give the Tampa Bay Rays the lead in the top of the 13th inning when he hit a deep fly ball off the base of the right field wall. With Yandy Diaz at first it was almost a given that the Rays would take the lead, until the ball ricocheted off right fielder Hunter Renfroe and then landed in the Red Sox bullpen.
MLB・14 DAYS AGO
FanSided

Just like that, the Boston Red Sox are on to the American League Championship Series. On an electric night at Fenway Park, American League Divisional Series hero Kiké Hernández drove in the winning run as the Red Sox eliminated the Tampa Bay Rays on an exciting Marathon Monday in the city of Boston.
MLB・13 DAYS AGO