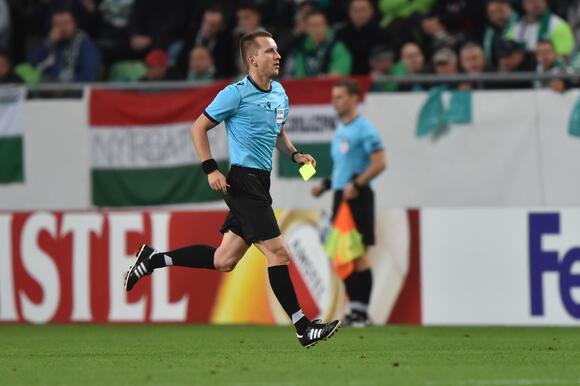 Thomas Tuchel’s side are the reigning champions after defeating Manchester City 1-0 in last season’s final.

The Blues have made a fine start to the Premier League campaign with three wins from their first four matches of the season. Chelsea also held on to secure a draw with 10 men at Liverpool.

Russian champions Zenit have also made a strong start to the season and are top of the table after seven games.

Frankowski took charge of a Champions League group stage match for the first time last season when he oversaw a meeting between Stade Rennais and Sevilla, who happened to be in Chelsea’s group.

The 34-year-old served as a fourth official at Euro 2020 this summer.

Tuchel has suggested that Ben Chilwell could be in line for this first start of the season , but N’Golo Kante is a doubt and Christian Pulisic is out for the Group H clash .

Mason Mount could also return for Chelsea after he was rested for Saturday’s 3-0 win over Aston Villa, which saw Romelu Lukaku score twice on his return to Stamford Bridge .

Barcelona Femení kicked off their European title defense in dominant fashion, beating Arsenal 4-1 at the Johan Cruyff Stadium in the Women’s Champions League group stage opener. Barça were on top from the start and created plenty of chances, scored some really good goals and proved they are still the dominant force in Europe and the favorites to win it all.
SOCCER・15 DAYS AGO
Insider

"Manchester United remain a team of individuals rather than a team. Cristiano Ronaldo has added to that rather than fixed it," said Jamie Carragher.
PREMIER LEAGUE・2 DAYS AGO
The Independent

What the papers sayA strong start to the season reportedly has the eyes of bigger clubs on Southampton’s Mohamed Elyounoussi. The Sun cites the Daily Record as saying Arsenal are monitoring the winger, who has scored four goals and provided two assists in seven appearances for Saints this term. But the papers add Leicester are also interested in the 27-year-old Norway international.Mohamed Salah wants some £400,000 per week to re-sign with Liverpool according to the Telegraph. The Egypt forward, 29, has scored an impressive 135 goals in 214 games for the Reds to be currently rated one of the...
PREMIER LEAGUE・2 DAYS AGO
Absolute Chelsea

Tammy Abraham has looked back on his time at Chelsea with fondness, appreciating the opportunity to be able to win trophies at Stamford Bridge. The 24-year-old ended his Chelsea spell after leaving on a permanent transfer to join Jose Mourinho's AS Roma in a deal worth £34 million. Abraham's exit...
PREMIER LEAGUE・14 DAYS AGO

Chelsea face Brentford in the Premier League on Saturday 16 October and it will be refereed by Anthony Taylor at the Brentford Community Stadium. The Premier League confirmed the officials for Matchweek 8 of the 2021/22 season, which will see Taylor take charge of the meeting in west London. Anthony...
PREMIER LEAGUE・9 DAYS AGO
The Independent

Manchester City will be wary of another Club Brugge upset when they travel to the Jan Breydel Stadium in the Champions League tonight. The Belgian side have defied the odds so far to pick up four points in Group A after holding Lionel Messi, Kylian Mbappe and Neymar to a 1-1 draw in their opener against Paris Saint-Germain and beating RB Leipzig 2-1 in Germany last time out.FOLLOW LIVE: Brugge vs Man City – latest UCL updatesThey come into tonight’s match ahead of the Premier League champions by one point, following City’s 2-0 defeat to PSG last month. City defeated...
UEFA・2 DAYS AGO
SB Nation

Chelsea resume our Women’s Champions League campaign with a trip to Turin, Italy to face Juventus. The Blues’ opening match versus familiar foes Wolfsburg ended in a thrilling 3-3 draw after Pernille Harder equalized for new team against her old one in the 92nd minute. Those heroics however were bittersweet as Chelsea dominated play, but lapses in defense gifted Wolfsburg all three of their goals.
SOCCER・8 DAYS AGO
SkySports

Emma Hayes says she is expecting an "epic battle" between Chelsea and Juventus in their Women's Champions League encounter on Wednesday night. Hayes' side go into the game two points behind the Italian champions in Group A after drawing their opening match at home to Wolfsburg last week. The clash...
SOCCER・8 DAYS AGO

Brentford resume a jubilant start to their maiden Premier League campaign by hosting west London rivals Chelsea on Saturday evening. Thomas Frank's side trail the reigning European champions by just four points and have only lost one of their opening seven top-flight fixtures, conceding a gut-wrenching 90th minute winner at home to Brighton. In fact, Brentford have spent just 5% of the Premier League season trailing their opponents, less than league leaders and upcoming opponents Chelsea (per Opta).
PREMIER LEAGUE・7 DAYS AGO
Tom's Guide

Liverpool travel to Madrid for the third game of their 2021-22 Champions League group stage campaign with a chance to exact a little revenge against Diego Simeone’s Aletico side that knocked them out in the Round of 16 two seasons ago. Stick with The Liverpool Offside for full coverage of Tuesday night’s match.
PREMIER LEAGUE・2 DAYS AGO
SB Nation

With Brentford out of the way, Chelsea’s next six games in all competitions, before the November international break, look eminently winnable. Those could be famous last words of course, but if we are to have any real designs of a truly successful season, we need to run through this next six with six wins: three in the league (Norwich, Newcastle, Burnley), two in Europe (Malmö twice), and a League Cup fourth round match against Southampton.
UEFA・2 DAYS AGO

Zenit vs Juventus: Zenit will be trading tackles against the current Group H table toppers, Juventus. They’re all set to take the field at Gazprom Arena, also known as Krestovsky Stadium, in Russia. This will be an exciting contest between the two teams. Juventus are at the top of the table winning both their games while Zenit are placed third with a win and a loss from their two games.
UEFA・1 DAY AGO
The Independent

Paris Saint-Germain host RB Leipzig in the Champions League tonight in Group A in a repeat of the 2019-20 semi-finals. Lionel Messi’s first PSG goal lifted the French club to a 2-0 win over Manchester City in their last match in the competition, as Mauricio Pochettino’s side responded in style after dropping points in their opening draw against Club Brugge. Leipzig will be desperate for points after losing their first two matches of Group A although the German side’s slow start to the Bundesliga season continued with a 1-1 draw against Freiburg on Saturday as they stayed eighth. PSG defeated...
UEFA・2 DAYS AGO
Sports Illustrated

Chelsea winger Christian Pulisic has suffered a setback in his recovery from an ankle injury sustained Sept. 9 against Honduras.
UEFA・2 DAYS AGO
firstsportz.com

Parc des Princes witnessed a mind-boggling encounter between the home side, PSG and RB Leipzig. The match went down to the wire with both teams giving their all in to ensure a win for their side. However, the competition was intense. The match began on a high note with PSG...
UEFA・2 DAYS AGO
theprideoflondon.com

Chelsea vs Malmo: Three things to look for in Champions League clash

Chelsea’s 2020/21 Champions League run can be regarded as one of the most impressive all-around campaigns in recent memory. The Blues’ triumph saw them dominate impressive opposition with suffocating defense and goals from all across the pitch. While they will still be dubbed the reigning champions of Europe for another eight months, last year’s tournament is irrelevant now. In fact, Chelsea should be stepping up its performances in light of every squad striving to beat it.
UEFA・2 DAYS AGO
fearthewall.com

TV: None (US), Sky Sports 2 (Germany), everywhere else here. Streaming: CBS All Access (US), BT Sport + (UK), Sling. Absolutely no illegal streams. There are legal means listed for you to watch the game. Use those and don’t share any illegal streams in the comments. Be critical, but not...
SOCCER・2 DAYS AGO
USA Today

A look at what’s happening in European soccer on Wednesday:. After consecutive losses to open its Champions League campaign, Barcelona needs to find a way to beat Dynamo Kyiv at home to have a realistic chance of advancing to the knockout stage. It is last in the group, a point behind third-place Dynamo. The Catalan club has made it past the group stage every season since an early elimination in 2000-01. While Barcelona has struggled, Bayern Munich has cruised and now visits second-place Benfica. Neither team has conceded a goal in this season's group stage but they had contrasting weekends. Bayern comes into the game off a statement 5-1 win over Bayer Leverkusen on Sunday, while Benfica needed extra time to beat second-division Trofense the day before.
UEFA・2 DAYS AGO
Absolute Chelsea

Chelsea face Malmo in the Champions League on Wednesday night at Stamford Bridge. The Blues come into the game off the back of a 1-0 victory against Brentford in the Premier League but fell to defeat in their last Champions League clash as they lost 1-0 in Turin to Juventus.
PREMIER LEAGUE・2 DAYS AGO