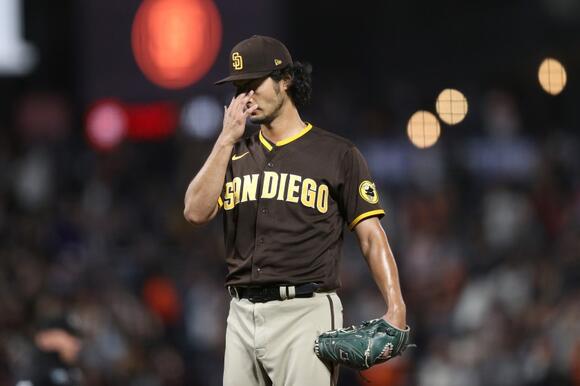 Yu Darvish made two starts against the Giants in April, allowing a run in each while going six innings the first time and getting one out into the seventh inning in the other.

The five-run first inning would be a preview of what was in store for Darvish, who surrendered a pair of home runs in the fourth inning and allowed a total of eight runs in his four innings.

That would be plenty for the Giants to hand the Padres their fourth loss on a trip that is four games old, a 9-1 thrashing that left Darvish with his hands on his hips watching balls fly out of Oracle Park and had multiple Padres batters hanging their head after they made outs. ( Box score. )

"Obviously, the frustration level for myself is very high," Darvish said. "I would assume all the other players, along with staff members and coaches, are carrying frustration as well. We still have to turn the page. We still have to come in tomorrow, get our work in and play a game. I think we need to flip the page and move forward.”

The victory clinched a playoff spot for the Giants for the first time since 2016.

What was already abundantly apparent was further crystallized Monday night in the opener of a four-game series: Darvish is a different pitcher, and the Padres are a different team than the last time the Giants saw them.

Monday’s loss followed the three-game sweep the Padres suffered in Los Angeles and was their 20 th defeat in 28 games.

The Giants won five of the nine meetings between the teams in the season’s first 5½ weeks. The last of those was an 11-1 Padres victory here on May 9.

That win got the Padres within 1½ games of the Giants in the National League West at the time. The Dodgers were third, another game behind.

Not two weeks later, the Padres took over atop the division. They would hold that spot for eight days and until about three weeks ago seemed virtually certain of being a playoff participant.

Monday’s loss dropped them not just out of postseason position but tied with the St. Louis Cardinals a half-game behind the Cincinnati Reds.

The Giants, who entered Monday with a 2½-game lead over the Dodgers and 18½ games better than he Padres, added three runs in the fourth on Mike Yastrzemski’s leadoff home run, a single by Curt Casali and Brandon Belt’s two-run homer.

“You feel like ‘OK, we’re within striking distance, four runs and a lot of game left,'” manager Jayce Tingler said. “The big one came when it turned 8-1. That’s when you know it’s going to be a real battle.”

Darvish has allowed 27 home runs, tied for fourth most in the NL. Of those, 17 have come in 54 innings over his past 10 starts.

Arguably the worst start of his 27 with the Padres lasted 96 pitches.

"Just some command issues," Darvish said. "Couldn't really execute my pitches the way I wanted to. To their credit, they did some good jobs fouling some balls off and getting to the balls I made some mistakes. ... The game started out with the home run. I think I sort of got tense and tightened up a little bit. That was probably the main problem."

His shortest starts were a pair of 2 2/3-inning outings against the Diamondbacks. But the eight earned runs he allowed Monday were the second most in his career. He allowed 10 on July 26, 2017, when he was with the Texas Rangers.

Monday followed Darvish getting his first win since June 21 in his last start, as he held the Angels to a run on three hits over six innings on Thursday at Petco Park.

That was just the third game the Padres won in Darvish’s past 10 starts, and it was just his second quality start in that span. His 6.84 ERA over those 10 starts was 4.04 points higher than his ERA over his first 16 starts.

It was those starts that got him an All-Star selection.

But a hip issue landed him on the injured list in July, forcing him to skip the All-Star festivities, and a lower back issue caused him to miss a start while on the IL last month.

While he declared himself free of any back malady after his last start, he never looked comfortable on Monday and had trouble even throwing strikes in the first inning.

"He was healthy, just didn’t have the overall command,” Tingler said.

His performance did nothing to alleviate the impact of the twin blows the starting rotation suffered between Sunday afternoon and Monday evening.

First, Blake Snell departed his start Sunday in Los Angeles with hip adductor tightness. He was more sore than expected on Monday, according to manager Jayce Tingler, and his taking his turn in the rotation on Friday seems unlikely.

Then, shortly before Monday’s game, Chris Paddack reported tightness in his elbow while playing catch and was placed on the 10-day IL with “inflammation.” The Padres called the move precautionary, but he will miss at least his start that was scheduled for Thursday.

Having to cover five innings also would not help with at least one bullpen game coming up before the weekend.

While they would not be shut out for a fourth time in five games, the Padres scored in just one inning for the sixth time in their past 28 games. In that stretch, which began Aug. 11, they have averaged a league-low 3.29 runs per game and been shut out six times.

The biggest winner of the 2021 major league season is … the 2017 Houston Astros. Settle down. I have not come to exonerate or forgive the sign stealers. I would not argue with anyone who feels the players got off easy by not facing suspension, and the bans on, say, Alex Cora and A.J. Hinch should have been longer than one year considering their one-year expulsions came in the one year the major league season was 60 regular-season games.
MLB・26 DAYS AGO
Audacy

Josh Donaldson has been following his former team rather closely this October and the former Atlanta Braves slugger and current Minnesota Twins third baseman had some thoughts about Tuesday’s Game 3 NLCS against the Los Angeles Dodgers. Donaldson was live-tweeting during the game and began to tear into the Dodgers...
MLB・1 DAY AGO

If the Boston Red Sox are going to take down the New York Yankees in the American League Wild Card Game tonight, they’ll need to do it without star slugger J.D. Martinez. Martinez was not included on Boston’s roster for the AL Wild Card Game due to a sprained left ankle. He suffered the injury in the fifth inning of Boston’s regular-season finale on Sunday.
MLB・16 DAYS AGO
Yardbarker

Baseball fans are about to see more of Joc Pederson over the next week as his Atlanta Braves get set to face the Milwaukee Brewers in the NLDS. There is something fans should know about him: he just started wearing a pearl necklace during games. Yes, beginning last week, Pederson...
MLB・15 DAYS AGO
USA TODAY

The Chicago White Sox were eliminated from the playoffs on Tuesday after losing Game 4 of their American League Division Series, 10-1, to the Houston Astros. The White Sox, specifically manager Tony La Russa, did not go quietly into the winter, however. Rather, La Russa made it clear that he...
MLB・8 DAYS AGO

Alex Cora has generally made very good managerial decisions with his Boston Red Sox this year. But he made one terrible decision in Game 5 of the ALCS on Wednesday that backfired. The Houston Astros entered the top of the sixth leading 1-0 on a second inning home run by...
MLB・19 HOURS AGO
The Spun

Max Scherzer started the Wild Card game for the Los Angeles Dodgers tonight. He did not make it through the fifth inning. While Scherzer gave up just one run, Dodgers manager Dave Roberts pulled his ace with one out and two men on in the top of the fifth inning.
MLB・14 DAYS AGO
FanSided

Verlander (elbow) is expected to receive a qualifying offer from the Astros this offseason, Chandler Rome of the Houston Chronicle reports. Verlander could potentially have an interesting decision on his hands. If healthy, he'd almost certainly receive more than the qualifying offer, which was worth $18.9 million over one year last year. He'll enter next season as a 39-year-old coming off of Tommy John surgery, so it's much less clear what his value will be on the open market. If he rejects the offer and signs elsewhere, Houston will receive draft-pick compensation.
MLB・14 DAYS AGO

The Los Angeles Dodgers are fighting the San Francisco Giants for the NL West title and one of their fans is fighting security inside Dodger Stadium. Dodgers fans are dealing with some tough injury news surrounding Clayton Kershaw who had to leave Friday’s start early and his postseason availability is in doubt.
MLB・19 DAYS AGO
MLB Trade Rumors

Three of our six experts think the NL Central champions will go on to win the World Series.
MLB・14 DAYS AGO
FanSided

Jose Altuve had an epic slide into home plate for the Houston Astros in Game 1 of the ALDS. The Houston Astros and the Chicago White Sox are battling in Game 1 of the ALDS at Minute Maid Park, except right now it’s not much of a battle. The game is unraveling quickly for the White Sox, while everything is going right for the Astros. Houston’s second baseman Jose Altuve had an incredible slide into home plate that resulted in him completely avoiding Chicago’s catcher Yasmani Grandal.
MLB・13 DAYS AGO
FanSided

While there are sure to be some free agent signings and wheeling and dealing by Jed Hoyer this offseason, it’s a good bet that a few of your favorite September (and October) Chicago Cubs will still be playing with the team in 2022. We know that won’t be the case for all 67 of the guys the Cubs have used this season, but there’s reason for hope for a few of the bright spots amongst the new-look end of summer North Siders.
MLB・18 DAYS AGO
Larry Brown Sports

The umpires for Game 5 of the ALCS between the Boston Red Sox and Houston Astros at Fenway Park in Boston investigated an issue with a light midway through the game on Wednesday. Just as the top of the sixth was about to begin, FS1’s Joe Buck explained a situation...
MLB・20 HOURS AGO
FanSided

Astros ace pitcher Lance McCullers Jr. is unlikely to pitch if Houston advances to the World Series, although the injury appears to be muscular in nature. Astros ace Lance McCullers Jr. helped the team to deliver during the ALDS against the Chicago White Sox, but the high level of performance cost him his availability in the ALCS.
MLB・19 HOURS AGO
FanSided

Will the Chicago Cubs move past the World Series champion core for good this winter? Or is a reunion (or reunions) in the cards? That’s been heavily debated among fans for the past month-and-a-half or so after Jed Hoyer sold off everything not bolted down at the July 30 deadline.
MLB・27 DAYS AGO