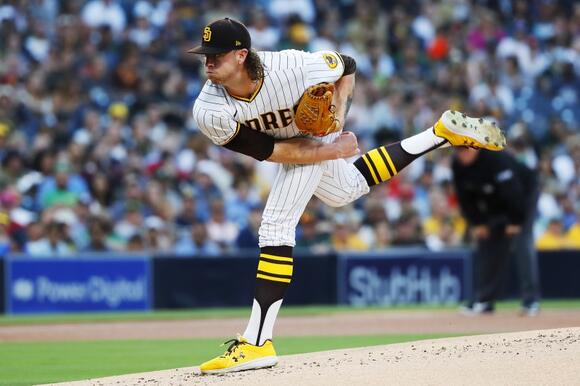 The Padres suffered another blow to their starting rotation Monday when right-hander Chris Paddack experienced discomfort in his throwing elbow while playing catch and was placed on the 10-day injured list.

Already unsure if Blake Snell will be able to start Friday’s series opener in St. Louis due to adductor (groin) tightness , the Padres will now be without their scheduled starter in Thursday’s finale here against the Giants.

The Padres recalled right-hander Shaun Anderson from Triple-A to take Paddack’s spot on the roster but not in the rotation. It is unclear how the Padres will cover what could be two consecutive starts.

Paddack’s placement on the IL, which was officially because of "elbow inflammation," is retroactive to Sunday with the hope rest will allow him to start Sept. 22 against the Giants at Petco Park.

Paddack started Saturday in Los Angeles and woke up Sunday with his arm feeling tighter than usual.

“It was significantly better (Monday), but he went to go throw ... and had a little something in there,” manager Jayce Tingler said. “We felt could we shoot for Thursday. We’re probably playing Russian roulette at that point. The best thing, we thought, was to give him the nine, 10 days off.”

Paddack had Tommy John surgery in 2016, but Tingler said the team’s medical staff is optimistic due to the location of the tightness.

According to Tingler, Paddack has not complained of discomfort when throwing his fastball. And his velocity on the pitch, while fluctuating his past two starts, ticked up to normal at the end of Saturday’s outing. He does feel some of the tightness when throwing his curveball, which he has used more frequently lately.

Snell, meanwhile, continued to get treatment for his adductor with the hope he can pitch Friday. That appears to be a dubious proposition based on his progress a day after making it through just 11 pitches Sunday against the Dodgers.

“He woke up a little bit …. more sore, tender than what he expected,” Tingler said. “So we'll (do) continued treatment and see how that goes. But it's just too early to say right now. I'd say still shooting for the start in St. Louis, but it's still too early to say if that's a real possibility or not.”

Snell entered Sunday having posted a 1.85 ERA in his previous seven starts. He had allowed four hits and three runs in 21 2/3 innings over his previous four starts.

Before the truncated starts by Paddack and Snell, the rotation had been much improved over the previous 2½ weeks. In 13 games between Aug. 25 and Friday, Padres starters turned in seven quality starts and combined for a 3.35 ERA in 75 1/3 innings.

Joe Espada is destined to become a big-league manager. But it won’t be with the San Diego Padres. That’s according to the Boston Globe’s Pete Abraham:. Astros bench coach Joe Espada is a future manager, but it may not be next season. The Padres are expected to bring in somebody with previous experience.
MLB・9 DAYS AGO
chatsports.com

Padres finalizing list of managerial candidates to interview, per report

The San Diego Padres have fired Jayce Tingler following the most disappointing season in franchise history. Now general manager A.J. Preller is tasked with hiring his third manager. Will it be a veteran manager this time around? Time will tell, but according to Bob Nightengale of USA Today on Twitter, he’s going to be interviewing plenty of former big league managers.
MLB・14 DAYS AGO
The Spun

If the Boston Red Sox are going to take down the New York Yankees in the American League Wild Card Game tonight, they’ll need to do it without star slugger J.D. Martinez. Martinez was not included on Boston’s roster for the AL Wild Card Game due to a sprained left ankle. He suffered the injury in the fifth inning of Boston’s regular-season finale on Sunday.
MLB・22 DAYS AGO
USA TODAY

The Atlanta Braves received a brutal injury update on starting pitcher Charlie Morton after he left Game 1 of the World Series. The Atlanta Braves got off to a tremendous start to Game 1 of the World Series, taking an early 5-0 lead over the Houston Astros. But, they received some awful news after starting pitcher Charlie Morton was removed from the game in the third inning with an apparent injury. As it turns out, the ailment is a serious one.
MLB・1 DAY AGO
MLB

MLB.com is keeping track of all the latest news and rumors surrounding three-time Cy Young Award winner Max Scherzer, who can become a free agent this offseason. Scherzer labored in his National League Wild Card Game start against the Cardinals on Wednesday, walking three batters and throwing 94 pitches over 4 1/3 innings, but he limited St. Louis to one run and the Dodgers advanced on Chris Taylor's walk-off homer.
MLB・20 DAYS AGO
ABC13 Houston

While Astros fans know the players, how well do you know their significant others? Meet the ladies supporting our guys on and off the field.
MLB・2 DAYS AGO
ClutchPoints

The New York Yankees flamed out of the 2021 MLB postseason after getting wrecked by the Boston Red Sox in a 6-2 American League wild-card game loss at Fenway Park on Tuesday. The Yankees crashing and burning against their fiercest rival and despite a luxurious payroll only add fuel to an offseason that’s going to have them answering plenty of questions, including whether the team’s future would still include veteran outfielder Brett Gardner — at least until the end of the 2022 MLB season.
MLB・21 DAYS AGO

Atlanta Braves outfielder Adam Duvall tried to field a baseball, but instead “broke his ankles” during Game 6 of the NLCS on Saturday. The Atlanta Braves are looking to exorcise the demons that was their collapse in the 2020 NLCS this Saturday with a Game 6 win over the Los Angeles Dodgers. With the win, they will reach the World Series for the first time since 1999. To do so, they will need to not make any mistakes.
MLB・4 DAYS AGO
NJ.com

The internet never forgets. Former New York Yankees slugger Alex Rodriguez has been covering the 2021 MLB playoffs by resuming his role as a studio analyst for FOX Sports. Last week, Rodriguez was analyzing the American League Division Series between the Boston Red Sox and Tampa Bay Rays with David Ortiz, Frank Thomas and Kevin Burkhardt. The gang was discussing a video clip from Game 1, when the Rays were seen eating popcorn in the dugout during the seventh inning of their 5-0 win.
MLB・14 DAYS AGO
chatsports.com

The New York Yankees face an interesting off-season as general manager Brian Cashman tries to navigate his future team. With a number of players on long-term contracts, is unlikely he’s able to find any trade partners that would give them a bit of financial relief. However, the Bombers added more high-priced players last season at the trade deadline than sent away, which has presented an interesting conversation, especially regarding lefty slugger Joey Gallo.
MLB・11 DAYS AGO
FanSided

It’s going to take a while for us to know who will be in the New York Yankees‘ 2022 Opening Day lineup due to the expiring Collective Bargaining Agreement, which is expected to derail the offseason. The silver lining? General manager Brian Cashman will have more time to see this...
MLB・21 HOURS AGO

The Chicago White Sox were eliminated from the playoffs on Tuesday after losing Game 4 of their American League Division Series, 10-1, to the Houston Astros. The White Sox, specifically manager Tony La Russa, did not go quietly into the winter, however. Rather, La Russa made it clear that he...
MLB・14 DAYS AGO
The Independent

Remember April, when Major League Baseball (MLB) pulled this year’s All-Star game from Georgia to protest the state’s new restrictive voting law? At the time MLB Commissioner Rob Manfred said, “I have decided that the best way to demonstrate our values as a sport is by relocating this year’s All-Star Game and MLB Draft. Major League Baseball fundamentally supports voting rights for all Americans and opposes restrictions to the ballot box.”But that was six months ago, an eternity in this country’s short attention span. Tonight’s opening game in the World Series between the Atlanta Braves and the Houston Astros will...
MLB・1 DAY AGO
WKBN

“To go out there and strike out the next guy with a broken leg, it blows my mind."
MLB・23 HOURS AGO
WXIA 11 Alive

ATLANTA — The Atlanta Braves are headed to the World Series after finishing off the Los Angeles Dodgers on Saturday night with a 4-2 win to win the NLCS 4-2, as well. It's the first time in 22 years the Braves will appear in the Fall Classic. The last time...
MLB・3 DAYS AGO
The Big Lead

Standing in the epicenter of a World Series storm with a broken leg, Charlie Morton was forced to make a choice. Give in to the considerable pain and leave of his own accord. Or dig deep and summon an otherworldly toughness. The 37-year-old, fighting the 17th battle of his postseason career, channeled all the grit and guile required from a true starting pitcher and stayed on the mound, retiring three more Houston Astros hitters before departing for the hospital and from this postseason.
MLB・19 HOURS AGO
thefocus.news

What is Freddie Freeman's net worth as Braves player nears free agency?

Charlie Morton suffered a broken fibula in Atlanta's World Series win Tuesday, but he made his mark and expanded an already impressive legacy.
MLB・1 DAY AGO
670 The Score

Shortstop Javier Baez is set to hit free agency for the first time in his career, and there’s still a strong connection between him and the Cubs organization, as Audacy Sports insider Jon Heyman explained on the Mully & Haugh Show.
MLB・1 DAY AGO