WATCH: First base umpire okay after wild throw drills him in head in Mets-Cardinals 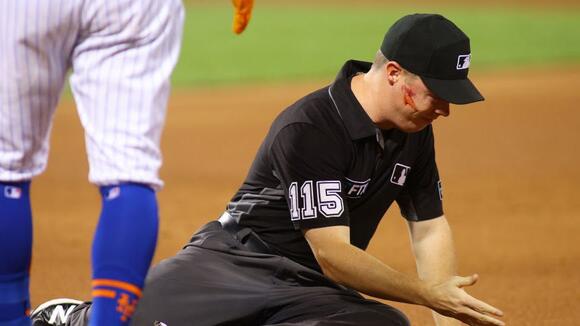 Cardinals infielder Edmundo Sosa entered Monday night with the 10th highest defensive WAR in the National League, regardless of position. Perhaps that meant that first base umpire Junior Valentine wasn't expecting the throw that was to come in the second inning of the Cardinals game against the Mets... and that ended up resulting in some pain.

That's a play I can't recall ever seeing, and it was a huge relief that Valentine got up and shook it off without too much apparent pain. There's definitely going to be a mark, though Valentine was apparently able to clean up the blood before it became an issue that took him out of the game.

Of course, umpires need to be ready for anything, be it an errant throw, a broken bat, a wild pitch or any of the other potential health hazards on the baseball diamond. Valentine's scare wasn't the first that we've seen, and it certainly won't be the last.

The biggest winner of the 2021 major league season is … the 2017 Houston Astros. Settle down. I have not come to exonerate or forgive the sign stealers. I would not argue with anyone who feels the players got off easy by not facing suspension, and the bans on, say, Alex Cora and A.J. Hinch should have been longer than one year considering their one-year expulsions came in the one year the major league season was 60 regular-season games.
MLB・28 DAYS AGO
New York Sports Nation

The offseason for the New York Mets is officially here. While Major League Baseball is in the midst of its postseason fans of the New York Mets have to look towards 2022 and what the teams needs to do to be apart of the October fun next season. There are...
MLB・12 DAYS AGO
metsmerizedonline.com

Breaking Down The Mets’ Head-to-Head Matchups in 2021

With the New York Mets watching the postseason like us after a disappointing 77-85 showing, this is the time of year where we dissect how they got to this point in about a million different ways. Even before New York’s regular season was officially complete, I couldn’t help but begin...
MLB・5 DAYS AGO
Sportsnaut

If the Boston Red Sox are going to take down the New York Yankees in the American League Wild Card Game tonight, they’ll need to do it without star slugger J.D. Martinez. Martinez was not included on Boston’s roster for the AL Wild Card Game due to a sprained left ankle. He suffered the injury in the fifth inning of Boston’s regular-season finale on Sunday.
MLB・18 DAYS AGO
USA TODAY

The reaction San Francisco Giants first base coach Antoan Richardson had to first base umpire Gabe Morales’ call on a check swing went viral on Thursday night. The Giants lost 2-1 to the Los Angeles Dodgers in Game 5 of the NLDS at Oracle Par in San Francisco. The game ended after Morales said that Wilmer Flores went around on a check swing on a 0-2 pitch from Max Scherzer with two outs (see it here). Most people recognized right away that Morales blew the call.
MLB・8 DAYS AGO
FanSided

Why was Cardinals manager Mike Shildt fired? Team president John Mozeliak offered up an explanation that won’t make fans feel any better. The St. Louis Cardinals unceremoniously fired manager Mike Shildt on Friday. This after a historic 17-game winning streak turned the team’s season around so significantly that it clinched a spot in the postseason.
MLB・9 DAYS AGO

Carlos Correa had a message for Ryan Tepera after Correa’s Houston Astros knocked Tepera’s Chicago White Sox out of the playoffs on Tuesday. Correa’s Astros won Game 4 of their ALDS with the White Sox 10-1 in Chicago on Tuesday to clinch the series. The Astros had 10 runs on 14 hits in the game. Correa went 2-for-4 with two RBIs.
MLB・10 DAYS AGO
Sportsnaut

The Los Angeles Dodgers were in a load of trouble long before star third baseman Justin Turner collapsed in a heap, but the optics of his late-game injury certainly didn’t help matters in NLCS Game 4. After all, it’s difficult to muster up one more rallying cry when your de...
MLB・1 DAY AGO

Boston Red Sox fans let Kyle Schwarber have it for letting a pop-up land on the infield, and he probably had it coming. If you let Schwarber play first base long enough, something like this was bound to happen. The Sox knew this when they acquired him from the Washington Nationals, and they sure as hell didn’t trade for him because of his defensive ability.
MLB・29 DAYS AGO
MLB

MLB.com is keeping track of all the latest news and rumors surrounding three-time Cy Young Award winner Max Scherzer, who can become a free agent this offseason. Scherzer labored in his National League Wild Card Game start against the Cardinals on Wednesday, walking three batters and throwing 94 pitches over 4 1/3 innings, but he limited St. Louis to one run and the Dodgers advanced on Chris Taylor's walk-off homer.
MLB・16 DAYS AGO
Larry Brown Sports

Justin Verlander may not be able to help the Houston Astros in their quest for another World Series title, but the star pitcher had some advice for the team during the first game of the ALCS. Carlos Correa helped the Houston Astros come from behind to beat the Boston Red...
MLB・7 DAYS AGO
NJ.com

Carlos Correa is going to get paid. It’s just a matter of how much the two-time All-Star will be offered. Correa headlines a bumper crop of free-agent shortstops, which also includes the Los Angeles Dodgers’ Corey Seager, Colorado Rockies’ Trevor Story and New York Mets’ Javier Baez. So what will...
MLB・9 DAYS AGO
Larry Brown Sports

Jose Altuve was targeted by Boston Red Sox fans with a profane chant during Game 3 of the ALCS at Fenway Park on Monday night. Red Sox fans could be heard chanting, “f— Altuve” during Game 3. The chants began early in the game, according to reporters in attendance. The chants continued even in the third inning after Altuve was unable to pick a throw that bounced into second while covering the bag.
MLB・5 DAYS AGO
FOX Sports

Ben Verlander breaks down his reaction to the Houston Astros controlling the Chicago White Sox in the ALDS. Afterwards, Ben Verlander analyzes a key moment from Carlos Correa that helped define the series.
MLB・9 DAYS AGO
FanSided

Jose Altuve had an epic slide into home plate for the Houston Astros in Game 1 of the ALDS. The Houston Astros and the Chicago White Sox are battling in Game 1 of the ALDS at Minute Maid Park, except right now it’s not much of a battle. The game is unraveling quickly for the White Sox, while everything is going right for the Astros. Houston’s second baseman Jose Altuve had an incredible slide into home plate that resulted in him completely avoiding Chicago’s catcher Yasmani Grandal.
MLB・16 DAYS AGO
CBS Sports

Verlander (elbow) is expected to receive a qualifying offer from the Astros this offseason, Chandler Rome of the Houston Chronicle reports. Verlander could potentially have an interesting decision on his hands. If healthy, he'd almost certainly receive more than the qualifying offer, which was worth $18.9 million over one year last year. He'll enter next season as a 39-year-old coming off of Tommy John surgery, so it's much less clear what his value will be on the open market. If he rejects the offer and signs elsewhere, Houston will receive draft-pick compensation.
MLB・16 DAYS AGO