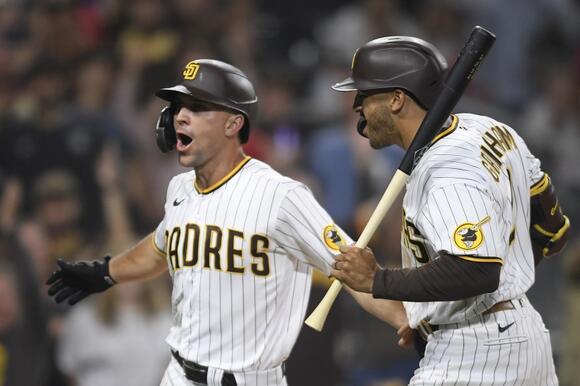 Whether or not it was a reluctant move, the Padres had a shortstop in waiting in Fernando Tatis Jr. and his balky shoulder when Jake Cronenworth fractured his left ring finger over the weekend in Los Angeles. They will, however, try a new three-hole hitter Monday night in San Francisco (6:45 p.m., BSSD) after getting shut out three times in five games last week:

It may be an odd choice as Frazier has not started in the three-hole all year, is slugging .406 on the season and hitting just .234/.401/.274 in 38 games with the Padres, but the offense was slumping before Cronenworth’s injury.

Frazier had shown signs of rounding into form, going 6-for-14 with a double and three RBIs, but he was 0-for-6 and hit by a pitch the last two days at Dodger Stadium, games started by Walker Buehler and Max Scherzer .

He was not alone in his struggles.

The Padres hit .158/.208/.242 this weekend against the Dodgers and scored just four runs — all on Saturday via hits from Manny Machado in the three-hole and Tatis in the clean-up spot.

On Monday, Tatis will hit second behind leadoff hitter Trent Grisham and Machado will bat fourth ahead of Eric Hosmer , Tommy Pham , Wil Myers and Victor Caratini , behind the plate as Yu Darvish’s personal catcher.

Frazier’s inclusion in the three-spot in place of Cronenworth allows the Padres to alternate lefties and righties through the first six spots in the order against the Giants’ planned bullpen game.

Darvish (8-9, 3.95 ERA) allowed one run and struck out seven over six innings on Wednesday against the Angels, his first win since June 21. The Padres went 3-7 in his starts during that span (6.84 ERA). Darvish has allowed two runs in 12 1/3 innings this year against the Giants.

Here is how the Giants’ current hitters have fared against Darvish:

The Giants, who are without both Alex Wood and Johnny Cueto , will counter with a bullpen game started by right-hander Dominic Leone (3-3, 1.48 ERA). Leone will be making his third start and 46 th appearance overall, although he has not topped more than two innings in any of his trips to the mound this year.

Machado, who is 1-for-10 with a walk and two strikeouts, is the only Padre with more than four plate appearances against Leone.

The Giants did add a bullpen arm with left-hander Jose Quintana — who has 10 strikeouts in six innings (1.50 ERA) since landing with the Giants — coming off the paternity list.

Ex-USD star Kris Bryant is not in the Giants' lineup against his former Cubs teammate Darvish:

It’s a moment we’ve been waiting for: a game where the San Francisco Giants can clinch the NL West. Technically that was the case last night as well, but it required some help from the Milwaukee Brewers,
MLB・14 DAYS AGO
Bleacher Report

MLB Players Most Likely to Retire After the 2021 Season

Letting go of a good thing is really difficult. For the MLB players mentioned in this piece, they've had tremendous success throughout their careers. Some have won MVPs, batting titles, Cy Young Awards and World Series titles. But all good things must come to an end. Without truly knowing a...
MLB・26 DAYS AGO
giants365.com

The San Diego Padres stalled the San Francisco Giants' division-clinching celebration Saturday afternoon, using a go-ahead double by Jake Cronenworth with two outs in the 10th inning for a 3-2 victory. The loss left the Giants (106-55) still needing either one more win or one Los Angeles Dodgersdefeat in order to claim their first National League West crown since 2012. The Dodgers played the Milwaukee Brewers on Saturday night.
MLB・14 DAYS AGO
dailydodgers.com

Giants look to clinch NL West in finale vs. Padres

Staring at the possibility that 106 wins won't be enough to keep them out of the National League wild-card game, the San Francisco Giants plan on taking a must-win approach to their regular-season finale Sunday afternoon against the visiting San Diego Padres. After being denied of clinching the NL West title by late-night wins by the Los Angeles Dodgers as well as their own failure Saturday afternoon, the Giants (106-55) enter Game 162 with a one-game lead over the Dodgers (105-56).
MLB・14 DAYS AGO

The Padres defeated the Giants 3-2 on Sunday, keeping the Giants' division-clinching champagne on ice for the time being. After the game, Jayce Tingler discussed the win and pregame reports that he would be relieved of his duties.
MLB・14 DAYS AGO
numberfire.com

San Diego Padres infielder/outfielder Adam Frazier is starting Sunday in the team's game against the San Francisco Giants. Frazier is getting the nod at second base while batting sixth in the order against Giants starter Logan Webb. Our models project Frazier for 1.0 hits, 0.5 runs, 0.3 RBI and 9.0...
MLB・13 DAYS AGO
KFVS12

Column: Dodgers, Giants remind Padres how far they are from baseball's October standard

NLDS dogfight raises concerns about what it will take to reach, excel in postseason
MLB・21 HOURS AGO
News-Democrat

In a stunning move made eight days after the conclusion of their season, the St. Louis Cardinals dismissed manager Mike Shildt on Thursday, chairman Bill DeWitt Jr. and President of Baseball Operations John Mozeliak announced. “We have determined that we have a philosophical difference in the direction that our Major...
MLB・2 DAYS AGO
Larry Brown Sports

The reaction San Francisco Giants first base coach Antoan Richardson had to first base umpire Gabe Morales’ call on a check swing went viral on Thursday night. The Giants lost 2-1 to the Los Angeles Dodgers in Game 5 of the NLDS at Oracle Par in San Francisco. The game ended after Morales said that Wilmer Flores went around on a check swing on a 0-2 pitch from Max Scherzer with two outs (see it here). Most people recognized right away that Morales blew the call.
MLB・2 DAYS AGO

MLB.com is keeping track of all the latest news and rumors surrounding three-time Cy Young Award winner Max Scherzer, who can become a free agent this offseason. Scherzer labored in his National League Wild Card Game start against the Cardinals on Wednesday, walking three batters and throwing 94 pitches over 4 1/3 innings, but he limited St. Louis to one run and the Dodgers advanced on Chris Taylor's walk-off homer.
MLB・9 DAYS AGO
CBS Sports

Verlander (elbow) is expected to receive a qualifying offer from the Astros this offseason, Chandler Rome of the Houston Chronicle reports. Verlander could potentially have an interesting decision on his hands. If healthy, he'd almost certainly receive more than the qualifying offer, which was worth $18.9 million over one year last year. He'll enter next season as a 39-year-old coming off of Tommy John surgery, so it's much less clear what his value will be on the open market. If he rejects the offer and signs elsewhere, Houston will receive draft-pick compensation.
MLB・9 DAYS AGO
The Spun

What in the world was Kadarius Toney thinking? That’s the question on everyone’s mind after the New York Giants rookie wide receiver was ejected in today’s game against the Dallas Cowboys. Trailing by 21 points in the fourth quarter, Toney was in the middle of a breakout performance. He had...
NFL・6 DAYS AGO
MLB Trade Rumors

The Chicago White Sox acquired reliever Craig Kimbrel from the Chicago Cubs at the trade deadline anticipating he would help fortify their bullpen for a World Series run. Instead, Kimbrel was a disaster on the South Side. A closer with the Cubs and throughout his big league career, the White Sox tried to use Kimbrel as a setup man.
MLB・3 DAYS AGO
NESN

After the Boston Red Sox clinched a chance to compete for the American League pennant Monday, the locker room celebration looked epic. But before that point, some in the organization shared the moment with their family and friends on the field. Manager Alex Cora’s daughter, Camila, found her way to her dad.
MLB・4 DAYS AGO
NJ.com

The internet never forgets. Former New York Yankees slugger Alex Rodriguez has been covering the 2021 MLB playoffs by resuming his role as a studio analyst for FOX Sports. Last week, Rodriguez was analyzing the American League Division Series between the Boston Red Sox and Tampa Bay Rays with David Ortiz, Frank Thomas and Kevin Burkhardt. The gang was discussing a video clip from Game 1, when the Rays were seen eating popcorn in the dugout during the seventh inning of their 5-0 win.
MLB・4 DAYS AGO
ClutchPoints

Chris Sale was called upon for the Boston Red Sox in Game 2 of the ALDS against the Tampa Bay Rays in what was his first postseason start since the 2018 World Series. Sale did not turn back the clock with a vintage performance but rather had an outing that he sure would like to forget.
MLB・7 DAYS AGO