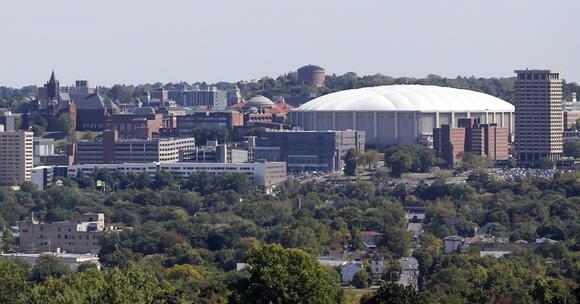 A professor at Syracuse University drew controversy with a series of tweets Friday criticizing white people for talking about the Sept. 11 terrorist attacks 20 years later.

Jenn Jackson, an assistant professor of political science who also has work published in Teen Vogue, singled out Andy Card, the White House chief of staff under President George W. Bush who spoke to the media around the 20th anniversary about the call in which he told the commander in chief about the attacks.

"It's twenty years since 9/11 and I'm still really disturbed by how many white pundits and correspondents talk about it," Jackson tweeted. "Card just said that 9/11 was the first time that Americans ever felt fear. He said that it was the last morning we woke up without fear and that the 'terrorists' succeeded in introducing us to fear."

"We have to be more honest about what 9/11 was and what it wasn't," Jackson added. "It was an attack on the heteropatriarchal capitalistic systems that America relies upon to wrangle other countries into passivity. It was an attack on the systems many white Americans fight to protect. We have to be clear that the same motivations that animated America's hypervigilance and responsiveness to 'terror' after 9/11 are now motivating the carceral state and anti-immigration policy."

Jackson's Twitter account has since been changed to make her tweets "protected," blocking people from seeing her tweets without permission. However, some users made screenshots and shared them publicly before her account went private.

Among those who commented was journalist Matt Taibbi, who tweeted : "Of course, because if Osama bin Laden was about anything, it was striking down heteropatriarchy…"

"Scratch off Syracuse on the kids/college list..." quipped the Hill's Joe Concha.

Syracuse University has said no disciplinary action would be taken against Jackson.

"Some have asked the University to condemn the professor's comments and others have demanded the professor's dismissal. Neither of those actions will happen," the university said in a statement .

According to Syracuse University, Jackson has been subject to violent threats in response to her criticisms. The school said it has notified the appropriate authorities.

A woman in Texas was found dead nearly a week after she was reportedly planning to tell her boyfriend's wife about their relationship.
GRAND PRAIRIE, TX・7 DAYS AGO
WashingtonExaminer

As Sen. Kirsten Gillibrand (D-NY) prepares for her second reelection bid, the New York Democrat could face a number of primary challengers from other members of her party, according to reports.
WASHINGTON STATE・6 DAYS AGO
WashingtonExaminer

Supplemental Security Income beneficiaries are set to receive their $914 monthly payments in only 11 days.
WASHINGTON STATE・7 DAYS AGO
Upworthy

A boy told his teacher she can't understand him because she's white. Her response is on point.

This article originally appeared on 12.07.15Fifth-grade teacher Emily E. Smith is not your ordinary teacher. She founded The Hive Society — a classroom that's all about inspiring children to learn more about their world ... and themselves — by interacting with literature and current events. Students watch TED talks, read Rolling Stone, and analyze infographics. She even has a long-distance running club to encourage students to take care of their minds and bodies.Smith is such an awesome teacher, in fact, that she recently received the 2015 Donald H. Graves Award for Excellence in the Teaching of Writing.
4 DAYS AGO
Benzinga

Sen. Ted Cruz (R-Texas) shared his views on why it was difficult for members of the Republican Party to have an opposing view with former U.S. President Donald Trump in an interview at the 2022 Texas Tribune Festival, held in September. What Happened: Trump is a "unique" character, according to...
TEXAS STATE・1 DAY AGO
Newsweek

The hammer assault has led to unfounded conspiracy theories about former Speaker Nancy Pelosi's husband, and any footage may in time be manipulated.
WASHINGTON, CA・1 DAY AGO
WashingtonExaminer

The Sundance Film Festival announced Thursday it has added a documentary about allegations made against Supreme Court Justice Brett Kavanaugh to its lineup.
UTAH STATE・7 DAYS AGO
WashingtonExaminer

Republican South Dakota Gov. Kristi Noem is calling on the federal government to investigate the leak of more than 2,000 Social Security numbers belonging to Trump officials and allies that were inadvertently included in documents released by the Jan. 6 committee earlier this month.
TEXAS STATE・7 DAYS AGO
WashingtonExaminer

Marjorie Taylor Greene Amendment Flops as Only 13 Republicans Back Her

The House of Representatives rejected a number of proposed amendments to a bill dealing with the Strategic Petroleum Reserve.
16 HOURS AGO
WashingtonExaminer

Colorado residents who filed their 2021 taxes will receive a tax rebate of up to $1,500 in 10 days.
COLORADO STATE・6 DAYS AGO
WashingtonExaminer

There are 25 days left for South Carolina residents to file their 2021 taxes and receive a rebate of up to $800 in the first quarter of the year.
SOUTH CAROLINA STATE・6 DAYS AGO
WashingtonExaminer

Gov. Ron DeSantis's (R-FL) office pushed back on White House press secretary Karine Jean-Pierre for claiming the governor wanted to "block" the study of the history of black people in the United States after he rejected the College Board’s Advanced Placement course for African American studies.
FLORIDA STATE・6 DAYS AGO
WashingtonExaminer

The family of a 6-year-old that shot his teacher at an elementary school in Newport News, Virginia, issued a statement saying that their son suffers from an "acute disability" and a parent usually attends classes with him.
NEWPORT NEWS, VA・7 DAYS AGO
WashingtonExaminer

Persecution facing Christians across the globe has never been worse.
CALIFORNIA STATE・6 DAYS AGO
WashingtonExaminer

New Jersey homeowners have 10 days to apply for a program that will give them up to $1,500 by May.
WASHINGTON STATE・6 DAYS AGO
WashingtonExaminer

Arizona will continue its practice of transporting migrants who cross the southern border to other destinations in the United States, Democratic Gov. Katie Hobbs announced Friday.
ARIZONA STATE・6 DAYS AGO