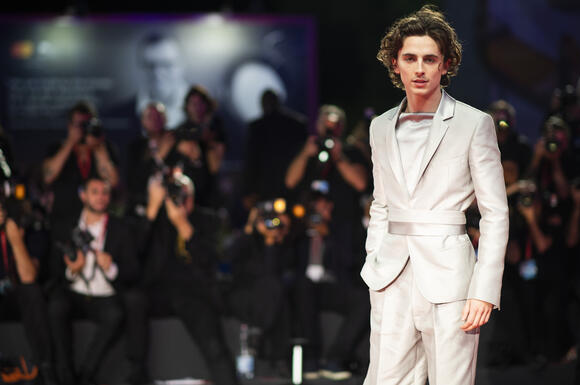 Although Timothée Chalamet has only been in the spotlight for a few years, his style has resonated with many and has made him one of the biggest male celebrities to watch on the red carpet .

The Oscar-nominated actor, who is co-chairing tonight’s Met Gala , has become known for his fashion-forward style since he was catapulted into the spotlight for his role in the 2017 movie, “Call Me By Your Name.” Chalamet’s style is defined by his experimental nature, where he looks to graphic prints, bright colors and different takes on the traditional suit for his red carpet looks. This style ethos has recently become a larger trend for men on the red carpet, specifically at this year’s awards season where many male celebrities looked to couture-like red carpet looks.

Chalamet has had many memorable red carpet moments over the years, but perhaps his most viral look took place at the 2019 Venice Film Festival, where the actor stepped onto the red carpet wearing a holographic, silver Haider Ackermann suit. The look went viral on social media and has become a hallmark of his style evolution.

The actor recently teamed with Ackermann again on his 2021 Venice Film Festival look , where he wore a black beaded sweater and matching trousers that glimmered on the red carpet against the photographers’ flashes.

While Chalamet hasn’t confirmed which designer he’s working with for tonight’s Met Gala , his look is expected to resonate with his fans and red carpet spectators alike.

Click through the above gallery to see more photos of Timothée Chalamet’s style evolution.

Everything to Know About the 2021 Met Gala

Click here to read the full article. Zendaya and Timothée Chalamet are rounding out their press tour for “Dune” with two more high-fashion looks. The stars, who are cast in the highly anticipated sci-fi film, attended the “Dune” London premiere Monday night wearing looks off the runway.More from WWDPhotos from the 'Dune' London Film PremierePhotos of Zendaya and Timothée Chalamet's 'Dune' Press Tour FashionAlexander McQueen RTW Spring 2022 Zendaya, who has previously given a nod to the the themes and motifs in “Dune” through her fashion during the press tour, looked to a warrior-inspired dress from the Rick Owens fall 2021 ready-to-wear...
MOVIES・2 DAYS AGO
WWD

Click here to read the full article. Timothée Chalamet has unveiled the first look at his upcoming movie “Wonka.” The film is a prequel to Roald Dahl’s famous novel “Charlie and the Chocolate Factory” and will explore the early days of Willy Wonka’s career in chocolate. The movie will apparently also include several musical numbers.More from WWDBleak, Post-Apocalyptic Fashion Is Making a ComebackHow to Dress Post-Apocalyptic Style According to These MoviesGolden Globes 2019 Red Carpet Details You May Have Missed On Sunday, Chalamet uploaded photos from the movie on Instagram and Twitter, including one of himself wearing Wonka’s iconic red velour coat...
MOVIES・10 DAYS AGO
WWD

Click here to read the full article. Zendaya will receive the CFDA’s Fashion Icon award at the CFDA Fashion Awards on Nov. 10. The CFDA also revealed that Anya Taylor-Joy, the lead actress in the Netflix hit miniseries, “The Queen’s Gambit,” will be given the Face of the Year, a new award for 2021. The CFDA will also honor The Model Alliance with the Positive Social Influence Award.More from WWDPhotos from the 'Dune' London Film PremierePhotos of Zendaya and Timothée Chalamet's 'Dune' Press Tour FashionA Look Back at Zendaya's Best Fashion Moments The CFDA Fashion Awards will be held at The Pool...
DESIGNERS & COLLECTIONS・2 DAYS AGO
HelloBeautiful

As She Should! Zendaya Is Named ‘Best Dressed’ By In Style Magazine

For the magazine's annual "Best Dressed Issue" Zendaya talks about her style inspiration, favorite red-carpet looks, and how she gets the perfect angle.
BEAUTY & FASHION・8 DAYS AGO

Naomi Osaka made a red carpet appearance at a Tag Heuer event in Los Angeles on Thursday night. The tennis star repped her brand partnerships by wearing a Tag Heuer watch paired with a head-to-toe Louis Vuitton ensemble. Osaka became an ambassador for the Swiss brand earlier this year. She also joined Louis Vuitton as its face in January and made her debut in the house’s spring 2021 campaign. On Thursday night, Osaka wore an graphic coat dress by Louis Vuitton. The monochrome jacquard print seen on the jacket was inspired by architecture as part of the collection’s collaboration with Fornasetti. The...
LOS ANGELES, CA・13 DAYS AGO
IBTimes

Zendaya Discusses Red Carpet Outfits: 'We Build A Little Story For All The Looks'

Zendaya opened up about her red carpet outfits including the one she wore during her first movie premiere at the age of 14. "When I was 14 and at my first movie premiere, my outfit was a bunch of stuff that I had from Target. And I thought I was fly. I felt cool," she told InStyle during an interview Tuesday. "To this day, I think that’s really all that matters. Then you know you’re doing the right thing."
BEAUTY & FASHION・8 DAYS AGO
Footwear News

Beyoncé is bringing glitz and glamour with her latest look. The “Crazy in Love” songstress gave a modern-day twist on Tinkerbell’s signature look, modeling a glittering green minidress complete with floral overlays. Vacationing on a yacht with husband Jay-Z, Beyoncé rounded out her look with a fruity citrus mini purse and cat-eye shades. View this post on Instagram A post shared by Beyoncé (@beyonce) To keep attention on her attire, the “Lemonade” creator opted for a see-through pump. PVC footwear rose to prominence in 2018 and has since become a staple on the celebrity style scene. Brands like Gianvito Rossi, Christian Louboutin...
BEAUTY & FASHION・28 DAYS AGO
Page Six

Zendaya wears harness made of chains for ‘Dune’ promo

Zendaya is all armored up. The actress, 25, is continuing to embrace her inner soldier while promoting “Dune,” most recently rocking a backless Vivienne Westwood harness top made entirely from draped chains at a London photocall for the film on Sunday. Styled by Law Roach, the star paired the breastplate...
CELEBRITIES・3 DAYS AGO

Chalamet and Zendaya, who star as Paul and Chani in "Dune," appeared on "Good Morning America" to talk about their experience making the sci-fi film.
MUSIC・3 DAYS AGO
Footwear News

Tiffany Haddish turned heads at “The Harder They Fall” movie premiere last night. The “Girls Trip” actress attended the red carpet ahead of the Netflix film premiere in Los Angeles on Wednesday night. For the event, Haddish modeled an Alexandre Vauthier olive green and crystal-embroidered minidress from the pre-fall ’20 collection. The dress features long sleeves, an asymmetrical hem and a high neckline. Haddish kept her accessories minimal but added silver sparkly jewelry to acccent the look. For her footwear, the actress decided on bronze-colored heels. Her shimmery shoes featured an open toe, as well as ankle and toe straps, with a...
LOS ANGELES, CA・7 DAYS AGO
Footwear News

Olivia Rodrigo is a huge fan of the early 2000s fashion and loves to be styled in the latest Y2K trends. It makes sense that the singer would dabble in what is now retro-inspired style since she was born in 2003 and missed embracing the iconic looks of the era. The “Jealousy, Jealousy” artist has been at the top of the music charts with her breakout hit album “Sour” and also sits at the top of the fashion world’s radar, too. Rodrigo is often spotted in colorful garments, mixed prints and lots of jewelry. It appears that her favorite choice of...
DESIGNERS & COLLECTIONS・3 DAYS AGO
Footwear News

Zendaya hit the red carpet looking like she stepped off a spaceship — with a full glam team. The actress appeared at the UK premiere of “Dune,” her new sci-fi movie co-starring Timothée Chalamet. Styled by Law Roach, she wore an asymmetrical Rick Owens white column gown that gave serious space princess vibes. The look featured one sleeve and sequins throughout the entire dress. Her jewelry, courtesy of Bulgari, included a silver bracelet that crawled up her right arm, simple earrings and multiple rings. Her purple galactic eye makeup tied the whole look together. The highly-anticipated film has been promoted for well...
BEAUTY & FASHION・2 DAYS AGO

Zendaya continued to prove she could easily have a career as a model as she struck a pose in the fiercest look - and fans are going wild over it. The Malcolm & Marie star, who has been on a roll for years with her stellar style thanks to celebrity stylist Law Roach, looked incredible as she slayed against a dreamy skyline in a metallic chain and oversized coin-covered Vivienne Westwood crop top paired with a checked skirt and nude pumps.
BEAUTY & FASHION・4 DAYS AGO
Footwear News

“Wonder Women” star Gal Gadot was one of several actresses honored at Elle’s annual Women in Hollywood event Tuesday night in Los Angeles. For the special occasion, the current cover girl opted for a striking hot pink number courtesy of Saint Laurent by Anthony Vaccarello. The vibrant, floor-length frock featured a high, halter-style neckline adorned with a black rose embellishment and a subtle leg slit at the side, which helped to show off her strappy black sandals as she walked the red carpet. The 36-year-old Israeli actress reached for a pair of slinky high heels from of luxury Italian brand Aleví Milano...
LOS ANGELES, CA・1 DAY AGO
thebrag.com

Timothee Chalamet has gone from strength to strength in his acting career so far. And now he’s fronting the latest edition of Time magazine. For his cover story, Chalamet reveals the best acting advice he ever received, as reported by yahoo! entertainment. “One of my heroes — I can’t say...
CELEBRITIES・9 DAYS AGO
Complex

Timothée Chalamet, who recently offered a well-timed glimpse at his upcoming take on Willy Wonka, has been named a “next generation leader” by Time magazine. In the resulting cover feature, which arrives just as Dune is set to hit theaters, the actor was asked about his Call Me By Your Name co-star Armie Hammer, who was accused of rape in March. Noted in the Time feature is that Chalamet “demurs” when asked about Hammer, opting instead for a “larger conversation” in the future.
CELEBRITIES・10 DAYS AGO
IBTimes

Timothée Chalamet dropped his first look from the highly anticipated movie "Wonka." The actor will portray the iconic character Willy Wonka in Warner Bros' upcoming prequel to "Charlie and the Chocolate Factory." Chalamet, 25, took to Instagram on Sunday evening to share two photos from the sets of "Wonka," which...
MOVIES・10 DAYS AGO
metaflix.com

Timothée Chalamet’s Hollywood ascendency continues unabated despite his already established meteoric success. In a Time Magazine profile that dropped on Monday, the captivating actor revealed the advice he’s followed so far along this brief but illustrious career path: no hard drugs and no superhero movies. “One of my heroes—I can’t...
MOVIES・9 DAYS AGO
digg.com

'I Am Weed,' Timothée Chalamet As Willy Wonka And This Week's Other Best Memes, Ranked

Here at Digg, we try our best to cover the most important and confounding memes that come across the timeline. But the web is littered with tons of great memes that never quite hit the mainstream and instead just bounce around the weird corners of Twitter or Reddit. Enter our...
NFL・8 DAYS AGO
POPSUGAR

We finally have a first look at Timothée Chalamet as Willy Wonka, and boy, is it a treat. The 25-year-old actor, who's set to portray the fictional chocolatier in Wonka come 2023, offered eager fans a glimpse at his getup for the Warner Bros. movie on Monday and was soon after spotted filming on set in England. Though Timothée will be playing a young version of Wonka before he opens his larger-than-life chocolate factory, his costume is instantly recognizable and draws inspiration from those worn by Gene Wilder in 1971's Willy Wonka & the Chocolate Factory and Johnny Depp in 2005's Charlie and the Chocolate Factory.
BEAUTY & FASHION・9 DAYS AGO