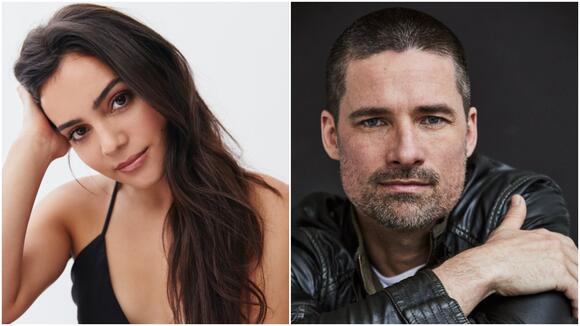 The one-hour drama, which was known as “The Nanny” in development, is described as a Hitchcockian contemporary thriller that follows a young woman as she is thrust into a world of old money and deadly secrets.

Londo plays Elena, who at first seems like just a wholesome, friendly young woman trying to get a job as the live-in nanny to a wealthy widower and his young son at the Greybourne. But she’s not the wide-eyed innocent she seems to be. Once Elena is ensconced in this world, she’ll discover she’s not the only one with dark secrets or a hidden agenda.

Christie plays Matthew, a self-made architect dealing with tremendous sorrow over his wife’s death. That’s one of the reasons he’s determined to do everything he can to help his young son be a happy little boy again, including hiring a new nanny. But to his surprise, he has instant chemistry with Elena.

Bishop plays Mrs. Ivey, an imperious woman used to ruling the roost and getting her way through a potent combination of wealth, power and sheer force of will. Acker is Tory, a woman who always has resented her younger, effortlessly graceful late sister. She takes an instant dislike to the fresh-faced, eager young nanny hired by her handsome brother-in-law. Although she’s married, she obviously has eyes for Matthew, inserting herself into his life and the life of her young nephew whenever she can.

Ecker plays Scottie, Elena’s boyfriend, sexy, seemingly a bit unpolished but not to be underestimated as he’s very sharp and always playing the long game. Lumpkin plays Elliott, a teenager who lives in The Greybourne with his wealthy, accomplished parents. Samiri plays Jasper, Matthew’s son, a shy, sad child who’s still reeling from the recent death of his mother. He has trouble trusting anyone, but we see the smart, funny, independent kid he really is when he starts to open up to Elena, who makes him laugh and feel safe again.

Royale plays Ginny, a cool, stylish young woman with dyed magenta hair who works alongside Elena as a nanny at The Greybourne.

It has been nearly 12 years since beloved actress Brittany Murphy died unexpectedly, and now a new documentary is detailing the chilling details of her final days. The film is titled What Happened, Brittany Murphy?, set to debut Oct. 14, on HBO Max. In the documentary, several people from Murphy's life are interviewed about the late star — PEOPLE reports — including Makeup artist Trista Jordan, who worked with her on 2009's Something Wicked, Murphy's final film. "Her eyes were so sunken, and she just seemed so sad," Jordan recalled. "She wasn't herself. She was in so much pain. She had Bambi legs and couldn't stand up."
MOVIES・10 DAYS AGO
countryliving.com

Give us a second. We're still picking up our jaws from the floor after seeing 9-1-1 star Angela Bassett at the 73rd Primetime Emmy Awards. The award-winning actress, producer, director, and activist continues to stun at the graceful age of 63. She recently walked the red carpet at the 2021 Emmy Awards in a gorgeous dress designed by Greta Constantine. The black-and-pink ensemble was accompanied by Gismondi jewelry, a Tyler Ellis clutch, and classic Louboutin heels. Let's just say that Angela was absolutely glowing as Hollywood gathered to celebrate the best in television and film.
CELEBRITIES・25 DAYS AGO
Insider

Katherine Heigl reportedly 'wanted out' of 'Grey's Anatomy' because it was 'so hard' working with Shonda Rhimes, according to a new book

Katherine Heigl reportedly found it "so hard" to work with Shonda Rhimes on "Grey's Anatomy." An anonymous source spoke to Lynette Rice for a new tell-all book about life on set of the drama. Heigl said she "ambushed" writers when she infamously withdrew her name from Emmys consideration. Former "Grey's...
CELEBRITIES・9 DAYS AGO
Hello Magazine

Nathan Fillion couldn't hide his discontent when he made a discovery on the set of The Rookie and shared it with fans on Instagram. The actor was sporting his LAPD uniform in the shot as he filmed season four of the show, but the image was taken during a break from shooting on the Warner Bros lot.
TV & VIDEOS・2 DAYS AGO

our no-frills, zero B.S. guide to when and where you can watch upcoming movies and shows, and everything else you could possibly stand to know. Who says Hollywood is running out of ideas? "Nash Bridges" started out as an unassuming police procedural series on CBS during the late '90s and early 2000s. It enjoyed solid enough ratings throughout its run and even managed to snag a quick reference on an episode of "The Sopranos."
MOVIES・2 DAYS AGO
Deadline

L.A. Law has taken a major step in its TV comeback. ABC has given a pilot green light to a new incarnation of the iconic Steven Bochco legal drama. The project, which had been in the works at the network since December, is headlined by Blair Underwood, reprising his role as attorney Jonathan Rollins in addition to executive producing.
TV SERIES・12 DAYS AGO

The L.A. Law sequel series being developed by Arrow and Trollhunters producer Marc Guggenheim is moving forward at ABC, bringing Guggenheim one step further to returning to the world of courtroom dramas. Guggenheim, a former lawyer, has long expressed an admiration for the original L.A. Law, which ran from 1987 to 1994. The new version will apparently see McKenzie Brackman reinventing itself as a litigation firm specializing in high-profile and controversial cases. It will star Blair Underwood, who played Jonathan Rollins in the original series. There is no word yet as to whether other characters from the original series will return, should the pilot go to series.
TV SERIES・12 DAYS AGO
Deadline

EXCLUSIVE: Akende Munalula (The Salon), Shacai O’Neal (Black Lightning), Lily Keene (Deadwood: The Movie) and Margot Catherine Terry (9-1-1) have joined Showtime drama pilot Coercion as series regulars opposite Sydney Chandler. Sydney Park and Tyrone Marshall Brown also star in the wiip-produced drama. Written and directed by Susannah Grant (Unbelievable, Erin Brockovich), Coercion is inspired by the life of Rebecca Bender, a national leader on and survivor of sex trafficking. Coercion depicts Bender’s (Chandler) escape from the world of sex trafficking after six years, her struggles to return to a “normal” life, and her emergence as a confident, funny and impassioned advocate...
TV & VIDEOS・12 DAYS AGO
Register Citizen

As Stanley, Perry joins previously announced cast member Hilary Swank, who stars as another journalist who moves to Alaska for a fresh start at a daily metro newspaper in Anchorage after making a big career mistake. Stanley is a fellow journalist who grew up in Alaska and returns home after a career at various metro dailies throughout the country. Near the end of his career, he hopes to make improvements to the Anchorage paper and enlists Eileen, a colleague from 20 years ago, to help out.
TV & VIDEOS・10 DAYS AGO
spoilertv.com

L.A. Law has taken a major step in its TV comeback. ABC has given a pilot green light to a new incarnation of the iconic Steven Bochco legal drama. The project, which had been in the works at the network since December, is headlined by Blair Underwood, reprising his role as attorney Jonathan Rollins in addition to executive producing.
TV SERIES・12 DAYS AGO

Dave Chappelle is courting controversy with his new Netflix special, while Hollywood is entering a major crisis of its own: the impending IATSE strike, which can shutdown showbiz. Meanwhile, award season is heating up with some buzzy contenders, as the box office is ready to take a stab with “Halloween Kills.”
MOVIES・2 DAYS AGO
spoilertv.com

NBC has opted not to proceed with its drama pilot Getaway. Headlined by Annie Ilonzeh, it starred two leads of recently canceled broadcast series that have since been resurrected, Manifest’s Matt Long and All Rise‘s Marg Helgenberger. Both actors are now available to do other shows, including their old ones, which both have been picked up for 20 episodes. Meanwhile, NBC’s other drama pilot, Dangerous Moms, remains in contention.
TV SERIES・9 DAYS AGO
Deadline

EXCLUSIVE: ABC is developing a legal drama written and executive produced by Bill Chais (Franklin & Bash), a former public defender, and Pat Cunnane (Designated Survivor), who was President Barack Obama’s Senior Writer and Deputy Director of Messaging at the White House. The drama is executive produced by the Black Sails duo of Jonathan E. Steinberg and Dan Shotz and Warren Littlefield via The Littlefield Company. 20th Television, where The Littlefield Company is based, is the studio. In the Untitled North Carolina Governor project, a brash Bronx public defender comes to North Carolina to reform a dysfunctional, seriously underfunded criminal justice...
TV & VIDEOS・6 DAYS AGO
TVLine

We’ve got questions, and you’ve (maybe) got answers! With another week of TV gone by, we’re lobbing queries left and right about dozens of shows including Evil, Legends of Tomorrow, Chucky and Survivor! 1 | How could S.W.A.T.‘s Hondo show up and tell the others, “Let’s get back to work” if Deacon had just left Hicks’ office and there was zero indication Hondo would ever get his job back? 2 | Did Evil assemble the most random assortment of guests for David’s ordination party? And after nothing happened between David and Kristen following their conversation about how things would have been different if they’d...
TV SERIES・2 DAYS AGO
SFGate

Amazon Studios has ordered a pilot for the George Lopez-led drama series “Once Upon a Time in Aztlan,” hailing from STXtelevision. The Mexican American multi-award-winning actor, author, comedian and film and TV star is executive producing via his Travieso Productions banner. The hourlong drama, written by, created and executive produced...
TV SERIES・6 DAYS AGO
Deadline

EXCLUSIVE: Details are emerging about Justin Chon’s (Blue Bayou) under-the-radar music drama Jamojaya, starring rapper Rich Brian. Recently wrapped in Hawaii, the film’s producing team includes Peter Luo (Crazy Rich Asians) and former Columbia/TriStar head Chris Lee. Chon wrote, directed, and produced the English-language feature, which sees rising Indonesian rapper Brian make his acting debut. Chon, whose Blue Bayou recently debuted at Cannes, has previously said the project is a “break-up story” of a father and son. The film charts the fallout after the son, whose career as a rapper is about to take off, hires a U.S manager and label to...
MOVIES・5 DAYS AGO