Derek Hough on ‘Dancing with the Stars’ having its first same-sex couple: ‘I think it’s going to be fantastic’ 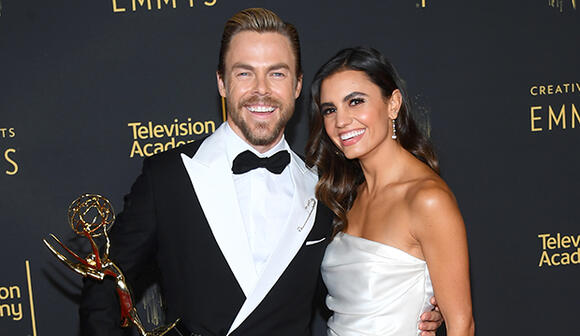 The news of “ Dancing with the Stars ” featuring its first same-sex couple with JoJo Siwa and a female pro on the upcoming 30th season may have surprised some fans, but definitely not Derek Hough .

“For me, it’s not really a big surprise,” Hough said backstage at Sunday’s Creative Arts Emmy Awards after winning his third Best Choreography statuette (watch via our sister site Deadline ). “I think, being in the U.K., living there for 10 years, all-girl competitions are very, very common for ballroom dancers. They’ve been doing it for many, many, many years, so for me, it’s just kinda like I’m very excited to see it. I think it’s going to be fantastic.”

There have been same-sex pairings on international versions of “Dancing,” but Siwa and her partner will be the first for the stateside one. Celebrity-pro pairings will be unveiled on the live season premiere next week, but Siwa may have accidentally revealed her partner already. The singer and dancer, who hopes to break down doors for the LGBTQ community, previously said that she would love to be partnered with Lindsay Arnold , Jenna Johnson or Britt Stewart .

SEE Everything to know about ‘Dancing with the Stars’ Season 30

Hough — who was a two-time nominee this year for “Dancing with the Stars” and “The Disney Holiday Singalong,” winning for the former (just like his first two victories in 2013 and 2015) — will return as a judge for the second season in a row, but he has a busier schedule this time around. The six-time “Dancing” champ kicks off his Las Vegas residency, “Derek Hough: No Limit,” at The Venetian Resort on Wednesday, Sept. 22 — two days after the Season 30 premiere — so he’ll be logging in some frequent flier miles. “I will also be having my Las Vegas residency starting next week … so I’ll be flying  back and forth, judging and doing the show five days a week,” he said.

PREDICT who will win ‘Dancing with the Stars’

I can't believe that
24d ago

haven't watched since they fired Tom & Erin, Tyra is a joke and now with the same sex partners they have gone to far.

The show doesn’t appeal to me sconce Tyra came on! Not wasting my time.

“Dancing with the Stars” has a (limited) studio audience again for Season 30, and if there’s one thing you can count on the fans for, it is the unnecessary booing of constructive, fair critiques from the judges that are actually helpful for the celebrity. After JoJo Siwa and Jenna Johnson‘s peppy cha-cha on Monday, Derek Hough advised her to learn to harness her energy in her routines. “I think with you, more is more, right? But sometimes, especially on the side by side, more isn’t more. You’ve got to contain that energy a little bit. It can get a little bit...
THEATER & DANCE・18 DAYS AGO
Cosmopolitan

Derek Hough unfortunately had to miss last night's Britney Spears-themed Dancing with the Stars episode due to possible Covid exposure. Tyra Banks announced the news, explaining that Derek has tested negative, but wasn't on set "out of an abundance of caution." "Due to a potential COVID exposure, and although he's...
TV & VIDEOS・12 DAYS AGO
Hello Magazine

Carrie Ann Inaba has had a difficult year and has been incredibly open about her health struggles, which led to her leaving The Talk to focus on her recovery. In a new post ahead of the Dancing with the Stars premiere on Monday night, the TV star opened up about her journey to wellness, which included everything from "endless blood tests" to "reading books and learning about emotional pain".
CELEBRITIES・27 DAYS AGO
Us Weekly

A match made for the dance floor. Derek Hough knows plenty about performing with a romantic partner, but he might not be giving Brian Austin Green and Sharna Burgess any Dancing With the Stars advice. The six-time mirrorball trophy winner, 36, dances with girlfriend Hayley Erbert regularly as part of...
CELEBRITIES・18 DAYS AGO

Peta Murgatroyd Will Not Be On 'Dancing With The Stars' This Season - Here's Why!

Longtime pro-dancer Peta Murgatroyd will noticeably be absent from Dancing With The Stars this season!. The 35-year-old two-time winner has been on the show since 2011 and has served as one of the pros since season 13. Though Peta will not be hitting the ballroom floor on the season 30...
THEATER & DANCE・27 DAYS AGO
goodhousekeeping.com

How Much Money Does the Celebrity Cast of ‘Dancing With the Stars’ Make?

Dancing With the Stars has been on television for literally 84 years, aka 29 seasons, with the 30th season premiering at 8 p.m. ET tonight on ABC. And no, the celebrities featured on the show certainly aren’t sashaying their way around the stage in humiliating outfits for free. While I’m...
TV SHOWS・19 DAYS AGO
GoldDerby

Jenna Johnson required more than ice after slipping during her and JoJo Siwa‘s historic “Dancing with the Stars” debut on Monday’s Season 30 premiere. The pro injured her right knee in the mishap and had to take Tuesday off from rehearsals. “I should have known that there was going to be a flaw in the system, but no one had ever done this before, so we didn’t know that with two girls and long dresses, long skirts, that potentially one of us would slip. I slipped on JoJo’s dress while we were doing the quickstep. Both my feet actually came out...
THEATER & DANCE・24 DAYS AGO
Distractify

Who Is Jenna Johnson Married to? Learn How She's Making History This Season

ABC's Dancing With the Stars is back with a new and historic season. DWTS pro Jenna Johnson and Dance Moms alum Jojo Siwa are the first same-sex duo to compete on the popular reality TV competition show. The two kicked off their partnership during the Season 30 premiere on Monday, Sept. 20.
THEATER & DANCE・19 DAYS AGO

Which Couple Left 'Dancing With the Stars' Last Night?

A second couple has said goodbye to the "Dancing With the Stars" dancefloor after an epic Britney Spears-themed night.
TV SHOWS・12 DAYS AGO
Us Weekly

Derek Hough and Hayley Erbert’s Relationship Timeline: From Dance Partners to Fake Proposals and Beyond

Dancing is their love language! Derek Hough and Hayley Erbert began captivating audiences with their stage chemistry well before they started dating. The former Dancing With the Stars pro first connected with Erbert after she was cast as one of the dancers in his and sister Julianne Hough’s Move Live Tour in 2014. By July 2015, the performers had become a couple — and one year later, Erbert made her DWTS debut as a troop dancer.
THEATER & DANCE・19 DAYS AGO
Hello Magazine

Dancing with the Stars' Carrie Ann Inaba took a walk down memory lane on Tuesday when she reminisced about the judging panel with a fun and heartfelt Instagram post. The 53-year-old was marveling at the fact that three of the judges on the hit dance show are the same for season 30 as they were for the first - and nearly all of the seasons inbetween.
CELEBRITIES・25 DAYS AGO
People

DWTS: JoJo Siwa and Jenna Johnson Dominate as They Dance to Lady Gaga and Ariana Grande's 'Rain on Me'

"Even though Jenna slipped we had the highest score of the night. That was insane," JoJo Siwa said of her week 1 scores despite her partner having a misstep. JoJo Siwa continues to get high marks on season 30 of Dancing with the Stars. On Monday, Siwa, 18, and pro...
THEATER & DANCE・19 DAYS AGO

The Dancing With the Stars contestants will keep on dancing till the world ends, although one of those pairs will no longer do so in front of a TV audience. On Monday, Oct. 4, ABC's competition show devoted the episode to Britney Spears' music with "Britney Night," giving the contestants a way to send the embattled pop star support amid her ongoing conservatorship battle.
THEATER & DANCE・12 DAYS AGO
ETOnline.com

Derek Hough is ready to get back into the ballroom. The Dancing With the Stars pro turned judge talked to ET's Cassie DiLaura backstage at the iHeartRadio Music Festival, where Hough was presenting an award in Las Vegas, about what to expect on season 30 of the show and which contestant he already has his eye on.
LAS VEGAS, NV・26 DAYS AGO
E! News

JoJo Siwa was dealing with a ‘very, very extreme’ personal issue during ‘Dancing with the Stars” Disney Week

JoJo Siwa had a tough week on “Dancing with the Stars” and it wasn’t because of the double Disney Week dances. The 18-year-old was dealing with an unspecified “extreme” personal experience off of the dance floor last week. “What goes on in my personal life every day is something. However, this week was very, very extreme and something that I had never gone through and something that I’ve never felt before,” Siwa told “Us Weekly.” “And it’s tough and it’s tricky.” The singer and dancer did not elaborate on what the issue was, but she credited the people in her life and...
THEATER & DANCE・3 DAYS AGO
Us Weekly

Cheryl Burke Is ‘Nervous’ to Compete on ‘Dancing With the Stars’ Sober: ‘I am Feeling Insecure and I am Scared’

Pre-show jitters! Cheryl Burke revealed why competing on Dancing With the Stars sober is so nerve-wracking ahead of the season 30 premiere. “I’m Nervous for DWTS … Confession time — this may be my 24th time doing #dwts, and even though I’m SO excited, I also have major nerves,” the 37-year-old dancer captioned an Instagram video of herself driving to rehearsal on Monday, September 20. “Doing this show sober has really made me realize my every insecurity and the amount of pressure I put on myself, which is tough.”
TV SHOWS・27 DAYS AGO
TVShowsAce

We all know that Dancing With The Stars likes to air fun themed episodes each year. But Carrie Ann Inaba recently spilled the beans and leaked some serious DWTS Season 30 spoilers!. Reddit users realized that she posted a schedule for the entire season on her Instagram story, which even...
TV SERIES・2 DAYS AGO
Parade

Only two weeks into season 30 of Dancing with the Stars, Amanda Kloots is tied for first place at the top of the leader board with JoJo Siwa. Each of the two celebrity dancers has 60 points out of a possible 80. “When you work so hard at something and...
THEATER & DANCE・13 DAYS AGO
US Magazine

Love in the ballroom! Jenna Johnson opened up about how difficult it is to balance her marriage to Val Chmerkovskiy while competing on season 30 of Dancing With the Stars. “It was a challenge for us to find a good balance of work life and home life because we were constantly talking about work, and this was a few years ago and so we really pushed ourselves to finish work at the door, come home and just be humans, just be a married couple,” Johnson, 27, exclusively told Us Weekly on Wednesday, October 6. “Obviously, [this] season [it] has been a little bit easier to do that because we can’t live together because of COVID.”
CELEBRITIES・10 DAYS AGO