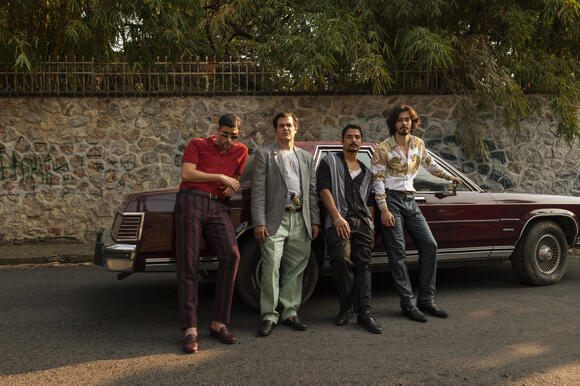 Netflix announced that the third and final season of “ Narcos: Mexico ” will premiere on Nov. 5 and released some first looks at the episodes.

This third and final season follows the war that breaks out after Felix’s arrest and the new Mexican kingpins who emerge as newly independent cartels navigate political turmoil and escalating violence.

Watch a teaser and see some first-look images for the third and final season below. 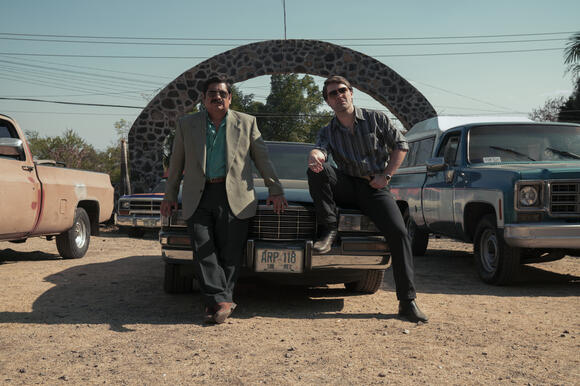 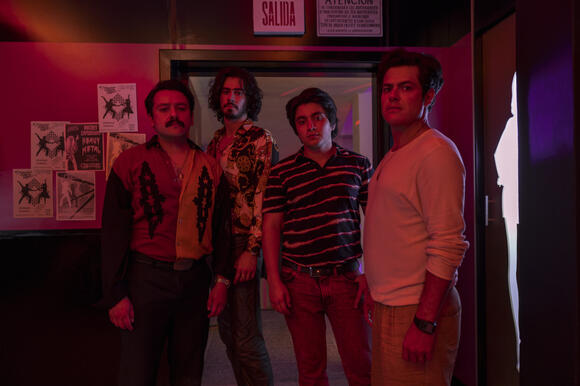 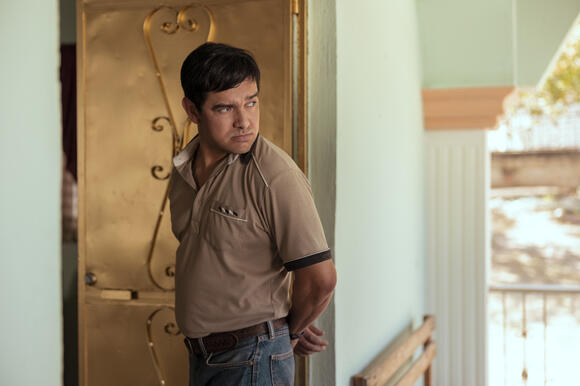 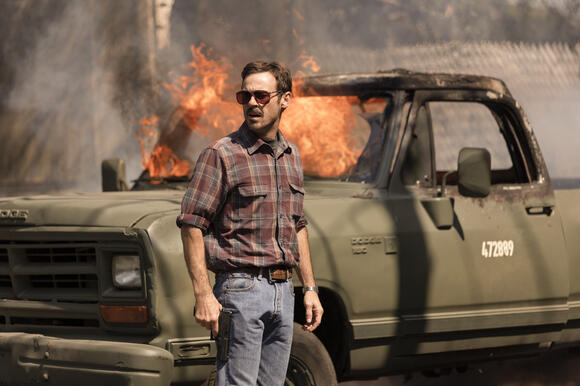 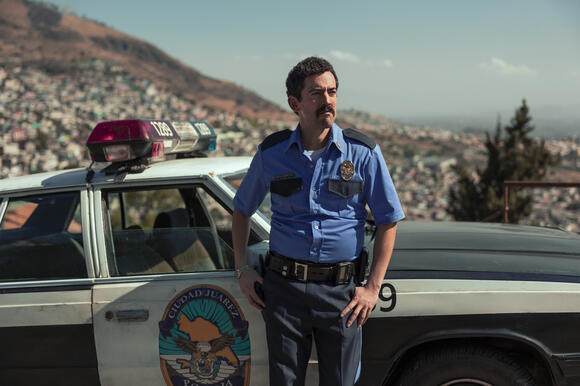 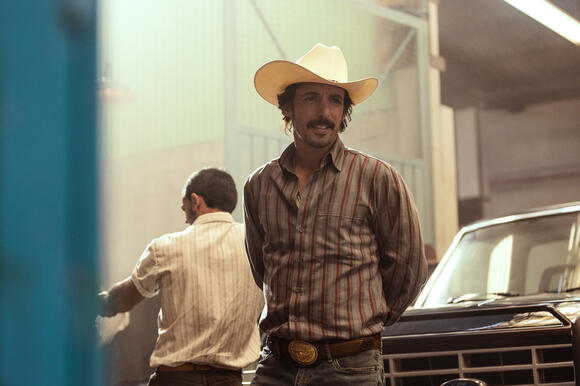 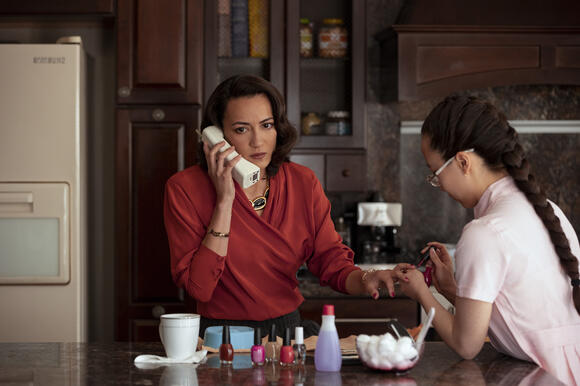 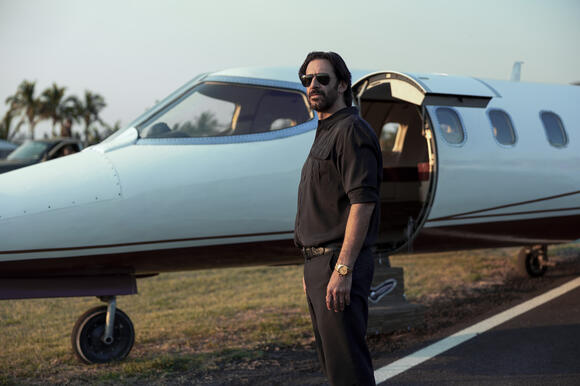 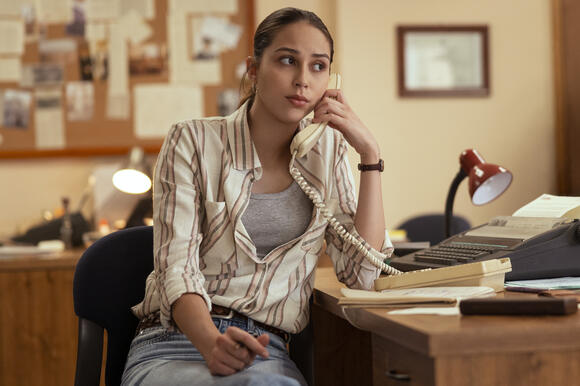 This fall, NBC’s “Days of Our Lives” is reviving its possession storyline. The legendary soap opera, which has run for over 50 years and 14,000 episodes, will revisit one of its most memorable plot points, when Marlena Evans (Deidre Hall) became possessed by the devil. Introduced in 1995, the storyline garnered plenty of controversy and attention for the series. “Days of Our Lives” airs weekdays on NBC and streams exclusively on Peacock. Watch a teaser below.

Netflix released a teaser for “ Colin in Black & White ,” premiering on Oct. 29. Created by Ava DuVernay and Colin Kaepernick, the six-episode series chronicles the NFL player turned activist’s coming-of-age story as he tackles race, class and culture as the Black adopted child of a white family. Jaden Michael plays Young Colin, with Nick Offerman and Mary-Louise Parker starring as his well-meaning parents Rich and Teresa. Kaepernick is the present-day narrator of his own story, while Amarr M. Wooten, Mace Coronel and Klarke Pipkin also appear in the series. Directors include Sheldon Candis, Robert Townsend, Angel Kristi Williams, Kenny Leon and DuVernay, who executive produces with Kaepernick and Michael Starrbury. Watch the teaser below.

ABC’s untitled Julie Durk project has cast Andrea Londo, Warren Christie, Kelly Bishop, Amy Acker, Jon-Michael Ecker, Lex Lumpkin, Henry Joseph Samiri and Aliyah Royale as series regulars. The series, a one-hour contemporary thriller, follows Elena (Londo), a young woman working as a live-in nanny who is thrust into a world of old money and deadly secrets at the upscale Greybourne apartment building. Christie plays Matthew, a self-made architect grieving over his wife; Bishop plays Mrs. Ivey, a wealthy woman who will do anything to protect her family; Acker plays Tory, a resentful woman who immediately dislikes Elena; and Ecker plays Scottie, Elena’s unpolished, attractive boyfriend. Lumpkin is Elliott, a teenager who lives in the building with his wealthy parents; Samiri is Jasper, Matthew’s son still reeling from the death of his mother; and Royale is Ginny, a stylish young woman who works alongside Elena as a nanny at The Greybourne. Durk serves as showrunner, executive producing alongside Ryan Seacrest Productions’ Ryan Seacrest, Nina Wass and Andrea Shay. Jeffrey Reiner directs the pilot.

Andrew Garfield and Patton Oswalt will appear on “The Tonight Show Starring Jimmy Fallon” along with a performance from “Little Shop of Horrors,” while “Jimmy Kimmel Live!” will feature Jennifer Aniston, Dave “Lil Dicky” Burd and Bazzi. Jeff Daniels and Nate Burleson will be on “The Late Show with Stephen Colbert”; Sarah Paulson, Machine Gun Kelly and José Medeles will appear on “Late Night with Seth Meyers”; and Drew Barrymore and Mary Elizabeth Winstead will be on “The Late Late Show with James Corden.”

Netflix released a trailer for the third and final season of “Narcos: Mexico,” premiering on Nov. 5. The crime drama, a companion series to “Narcos,” is set in the ’90s and examines the illegal drug trade in Mexico after “Narcos” focused on Colombian illegal drug trade. Season 3, which is 10 episodes long, follows the war that breaks out after Felix Gallardo (Diego Luna) is arrested. As newly independent cartels struggle to survive political upheaval and escalating violence, a new generation of Mexican kingpins emerge. In the trailer, clips are shown of police break-ins, extravagant mansions and large-scale shootouts. The drug trafficker...
TV SERIES・13 DAYS AGO
Variety

The second season of Peacock’s “Saved by the Bell” reimagining will stream Nov. 24. In the second season, Bayside High is back in session, despite the Season 1 finale teasing the emergence of COVID-19 in the world of the show. Now, the students are getting ready to compete in the Southern California School Spirit Competition, with Mac (Mitchell Hoog) seeing it as a way to finally get out of his father Zack’s (Mark-Paul Gosselaar) shadow. Meanwhile, Daisy (Haskiri Velazquez) finds herself paying more attention to her love life than she wants to; Jamie (Belmont Cameli) leans on Lexi (Josie Totah) in...
TV SERIES・11 DAYS AGO
Variety

The final season of “Ozark” will premiere Jan. 21, 2022 on Netflix with its first seven episodes. The second seven-episode half of the season will then follow later in the year. “Ozark” follows the Byrde family’s criminal enterprise in the Ozarks. As patriarch Marty Byrde (Jason Bateman) put it in the series premiere back in 2017, “Money is, at its essence, that measure of a man’s choices.” That quote is laid over the beginning of a teaser for the final season, implying it will come back to haunt him in the show’s final run. The final season stars Bateman, Laura Linney, Julia...
TV SERIES・5 DAYS AGO
Insider

CBS has given full season orders to two of their new series NCIS: Hawai’i and FBI: International. Both series are spinoffs of established brands for the network and have performed well in their first few airings. A total episode count was not announced. Netflix released the trailer for the upcoming...
TV SERIES・13 DAYS AGO
Marietta Daily Journal

Narcos: Mexico is gearing up for the final blow as Season 3 kicks off Friday, November 5 on Netflix. In a first look at the latest chapter, the ’90s-set drama examines the igniting globalization of the drug business and the war that breaks out following Felix’s (Diego Luna) arrest. As different cartels struggle to survive political upheaval and escalating violence, a new set of kingpins are emerging.
TV SERIES・13 DAYS AGO
flickprime.com

Narcos: Mexico is an American-Mexican crime drama streaming tv sequence created and produced by Chris Brancato, Carlo Bernard, and Doug Miro, which premiered on Netflix on November 16, 2018. It was initially the fourth season of the Netflix sequence Narcos. , but it surely was finally developed as a companion...
TV SERIES・13 DAYS AGO
showbizjunkies.com

Assorted cartels are vying for power in the third and final season of Netflix’s Narcos: Mexico. The official trailer reveals a rising body count, Juarez as the key to control of the drug trade, and the DEA believes Amado Carrillo Fuentes will become the most powerful drug trafficker in Mexico’s history.
TV SERIES・13 DAYS AGO

Bad Bunny is not easing into his second act as an actor. The reggaeton superstar comes out guns blazing in the middle of an intense chase scene in his streaming debut in the just-released trailer for the Netflix drug dealing drama Narcos: Mexico. BB joins the already ridiculously stacked cast for the final season of the series that has chronicled the rise and fall of a series of murderous drug cartels.
TV & VIDEOS・12 DAYS AGO
thisis50.com

Joe Pera has announced the premiere date for the third season of his wonderful, very low key series, Joe Pera Talks With You. It's back Friday, November 7 at 12:30 AM on Adult Swim, so less than a month from now. Joe made the announcement via a new teaser video that involves darts and power adapters. You can watch that, and a few other clips from the series, below.
TV SERIES・13 DAYS AGO
Middletown Press

Apple TV Plus released a trailer for “The Shrink Next Door,” which premieres the first three episodes of the eight-episode series on Nov. 12, followed by one new episode weekly, every Friday through Dec. 17. The series stars Will Ferrell, Paul Rudd, Kathryn Hahn and Casey Wilson and is inspired...
NFL・12 DAYS AGO

Fan-favorite spy series Alex Rider is returning to IMDb TV on December 3, and in anticipation, the Amazon free streaming service has unveiled the first sneak peek for the second season. The trailer (watch below) features plenty of fighting, shoot-outs, and tense confrontations as London-based teenager Alex continues his unwitting...
TV SERIES・13 DAYS AGO
tvseriesfinale.com

Saved by the Bell is returning for its second season next month, and Peacock has now released a trailer. The comedy is a revival of the popular Saturday morning series from the 1990s of the same name. At the end of season one, Governor Morris (Mark-Paul Gosselaar) put a three-year...
TV SERIES・10 DAYS AGO
tvseriesfinale.com

DC’s Legends of Tomorrow fires up its Season 7 this week with the team trapped in 1920s Texas following the Waverider’s destruction of, well, the Waverider. Not to give anything away from the season premiere, but Sara (Caity Lotz) and her stranded band of time travelers readily realize why their own ship suddenly appeared from the future to blow up the one they were about to board and skedaddle. And it’s wild.
TV SERIES・12 DAYS AGO
WISH-TV

INDIANAPOLIS (WISH) — The third season of The CW’s “Batwoman” will premiere at 9 p.m. Wednesday on WISH-TV. News 8’s Randall Newsome spoke with two of the show’s stars, Javicia Leslie and Robin Givens, ahead of the premiere. Leslie stars as Ryan Wilder, and Givens plays Jada Jet. They shared what fans can expect from the third season.
INDIANAPOLIS, IN・12 DAYS AGO
imdb.com

The Television Academy Foundation named two new members to its board of directors: Nne Ebong, vice president of overall deals for series at Netflix, and Jamila Hunter, executive vice president of programming and development at Freeform. Both have been elected to three-year terms. At Netflix, Ebong leads the development of original series under creative partnerships with Shonda Rhimes’ Shondaland, Barack and Michelle Obama’s Higher Ground Productions and others. She joined Netflix after serving as creative lead at film and television studio Wiip, where she developed and produced projects for cable, streaming and the international marketplace. Her projects at Wiip included HBO’s...
ADVOCACY・9 DAYS AGO
Variety

The Roys are back — and bigger than ever, according to HBO. Season 3 of HBO’s family-dynasty drama “Succession,” which premiered Sunday night, drew over 1.4 million viewers across all platforms, the network said. That was a viewership high-water mark for the series, and it was the best premiere-night performance of any HBO original series since the launch of HBO Max in May 2020.
TV SERIES・6 DAYS AGO