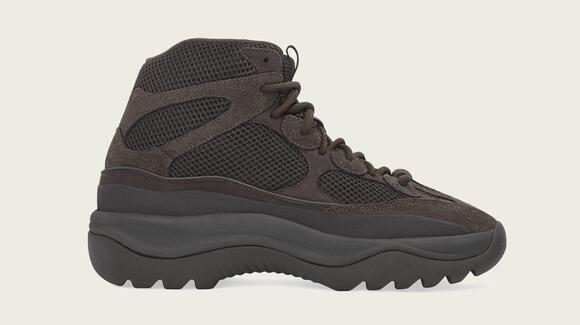 Available today at Adidas.com/Yeezy, Yeezy Supply and through various Adidas Yeezy stockists is the Kanye West-designed boot in “Rock” and “Oil,” two colorways of the silhouette that debuted in spring ’19.

The first style wears a predominantly light brown color scheme while the latter pair is executed in a dark brown hue. The boot is constructed with mesh as the base of the upper and is paired with suede overlay panels on the sides and mudguard. Adding to the look are matching shoelaces and a thick rubber outsole designed to handle the winter elements.

The Adidas Yeezy Desert Boots in the “Rock” and “Oil” makeups were available at Adidas.com/Yeezy and Yeezysupply.com and each pair came with a $200 price tag. Like most Adidas Yeezy drops, the pairs sold out quickly upon release. For fans who missed out on the retail launch, you can still buy a pair on the resale market and prices aren’t astronomically high.

The Salvatore Ferragamo Group is bulking up its management team. Daniella Vitale will join the company as chief executive officer North America effective Oct. 18, while Vincenzo Equestre took on the position of CEO Europe, Middle East and Africa on Oct. 7. This marks a return to Ferragamo for Vitale,...
BUSINESS・5 DAYS AGO
Vogue Magazine

From Mini to Micro, Skirts Are Getting Short-Short

Last year, the leg-baring mini made its triumphant return, cropping up on the runways of Chanel, Versace, Missoni, and Miu Miu. Now, the leggy silhouette continues to reign supreme; it was so ubiquitous in the spring 2022 collections that it’s almost easier to note which designers chose not to show teeny-tiny skirts.
DESIGNERS & COLLECTIONS・10 DAYS AGO

Flat Shoes Are Back! Here Are 5 Styles We’re Wearing This Autumn

For some, the high heel is a tool of the patriarchy and a symbol of hypersexualisation. For others, it is simply a shoe that becomes uncomfortable five minutes into wearing it. Controversial reputation aside though, most fashion lovers can agree that the high heel is a feat of engineering. Coming in every colour, shape and style imaginable, heels are often regarded as the most imaginative footwear out there.
APPAREL・11 DAYS AGO
sneakernews.com

Fresh off an early look at the YZY BSKTBL KNIT 3D, Kanye West’s adidas YEEZY empire has (unofficially) delivered news of a YEEZY 700 V3 in a “Copper” colorway. Although ‘ye has applied brown tones to his footwear before, he’s never done so in the gradient fashion that appears on the newly-surfaced BOOST-less sneaker. Primeknit construction is featured on the upper, but the profile overlays indulge in a semi-translucent finish that delivers a seemingly fully-molded build. While it’s almost certain every pair of the YEEZY BOOST 700 V2-successor will follow the same color arrangement, it’s possible a random layout is found on the “Copper” offering given the palette’s “metallic” properties. Tongues and the bulk of the sole unit deviate from the shades of brown and orange found across most of the upper, opting for a charcoal makeup that complements the aforementioned hues well.
APPAREL・11 DAYS AGO
Insider

Ankle-length boots may be the most versatile footwear around. These are the best options for men in 2021.
APPAREL・6 DAYS AGO
Footwear News

4 Cute and Comfy adidas Outfits to Wear This Fall

Fall is officially here, which means it’s time to swap out your breezy sundresses and strappy sandals for some warmer pieces. And, if you’ve taken one glimpse at your closet to realize it’s currently in need of a major update, adidas has you covered with tons of stylish options for the season. Among its fall ’21 offerings, you’ll find everything from plush tracksuits to lightweight bombers and long-sleeved dresses to help you nail a cool street style aesthetic. Meanwhile, when temperatures really dip, you can reach for the brand’s equally coveted yet heftier alternatives like insulated puffer jackets, thick hoodies and...
APPAREL・3 DAYS AGO

With the debut of the YZY QNTM, adidas Yeezy revealed their intent to explore the performance category. And after over a year, glimpses of a new court-ready silhouette — the YZY BSKTBL KNIT 3D — have finally boiled to the surface. Pictured here in a “Slate Blue” colorway, the silhouette...
APPAREL・12 DAYS AGO
sneakernews.com

As Kanye West continues to appear throughout the United States of America in all-black ensembles, his adidas YEEZY propositions have been emerging in much more vibrant outfits. While degrees removed from the boldness of the slip-on “Vermillion” style expected before October ends, a newly-surfaced YEEZY SLIDE “MX” introduces more variety to a lineup largely criticized for its tonal offerings.
DESIGNERS & COLLECTIONS・12 DAYS AGO
sneakernews.com

Since its debut on September 24th, 2016, the adidas YEEZY BOOST 350 V2 has undergone a handful of design modifications that’ve reenergized it enough to keep “fresh.” No updates, however, have departed as much from the original blueprint as does the model’s CMPCT (read: “compact”) version, which is expected to launch in December.
APPAREL・5 DAYS AGO
hypebeast.com

Shortly after surfacing, we now have an official look at the YEEZY 500 “High Mist Stone.”. Making its return, the unique high-cut sneaker silhouette is set to release in a striking mix of grays. The adidas YEEZY 500 “High Mist Stone” features a neoprene base framed by leather and suede panels that provide a dynamic design centered around various rounded forms. Rounding up the design of the shoe are rope laces with toggle closures and sculpted adiPRENE midsoles with rubber outsoles segments.
APPAREL・13 DAYS AGO

Not only is there a new basketball model rumored to release this winter, but another Adidas Yeezy 700 V3 colorway is also expected to drop in the coming months. Per Yeezy Mafia, the Yeezy 700 V3 will hit retailers this December in a new “Copper Fade” makeup. The trusted Yeezy leaker account also shared mock-up photos of the forthcoming style, revealing a mostly orange mesh upper with brown appearing on the ankle collar and heel counter. In addition, the shoe comes with a set of black shoelaces while grey accents appear on the toebox and on the EVA foam midsole replacing the Boost cushioning featured on other Yeezy 700 models.
APPAREL・11 DAYS AGO
sneakernews.com

If the past year is any indication, adidas Yeezy is just as keen to refresh their older offerings as they are to create new ones. And this October, we can expect even more evidence of the former as the Yeezy Boost 700 is to return in its OG-reminiscent “Wash Orange” colorway.
BEAUTY & FASHION・12 DAYS AGO
Footwear News

Doja Cat hit the stage of the Austin City Limits music festival in style. The “Planet Her” artist performed on Saturday at ACL Festival in Austin, Texas. The singer took the stage in a matching shredded set including a crop top with a criss-cross neckline in shades of white, nude and mauve. She added a white lace cutout sleeve to her left arm that matched the fabric seen on her top and one-legged cutout pants. On her feet, Doja Cat wore white platform ankle boots while on stage resembling a pair she just recently wore to perform at Global Citizen Live. Her...
AUSTIN, TX・13 DAYS AGO
themanual.com

How To Wear Timberland Boots: Styles and Lacing Tips for Men

Is there any pair of boots more iconic or more associated with fall and winter style than Timberland boots? It’s a question that’s up for debate, sure, but for hard-working casual style across a variety of seasons, Timberland boots, or “Timbs,” are always a safe, stylish and classic-yet-modern bet. And yet, there’s also a debate over how to wear Timberland boots. When we think of the brand, we think of the iconic “Yellow Boot,” the lace-up work boot designed to be worn in so many ways beyond just a day’s hard work.
APPAREL・12 DAYS AGO
inputmag.com

Y-3, the fashionable sportswear line from Japanese designer Yohji Yamamoto and Adidas, is turning to another offshoot from the Three Stripes banner ahead of winter. Together with Adidas Terrex, Y-3 is launching a brand new sneaker-boot silhouette that’s as menacing in its appearance as it is in function. The Swift R3 GTX boasts a GORE-Tex lining and membrane for waterproofing as well as a Continental outsole favored in the outdoor space for its traction in both wet and dry conditions. To keep your feet secure, a wide lacing system is combined with a zip closure, underneath which is a neoprene gusset that’ll hug you like a sock.
APPAREL・10 DAYS AGO
themanual.com

How To Wear Desert Boots: Fall Styles and Outfits for Men

There are certain style essentials we look forward to wearing each and every time the seasons change, especially as fall rolls back into town and brings with it the chance to dress with deeper textures and more rugged materials. Take desert boots, for instance. They look great in every season, sure, but there’s something about fall that makes it a great time to really nail down how to wear desert boots. The desert boot is a modern style staple for plenty of reasons, chief among them the fact that it’s both classic and modern, easy to dress up or dress down.
APPAREL・11 DAYS AGO
Footwear News

A new sneaker from Kanye West’s acclaimed Adidas Yeezy line is reportedly dropping soon. According to Yeezy Mafia on Instagram, the latest Adidas Yeezy BSKTL Knit will hit shelves in the “3D Slate Blue” makeup before year’s end. The Yeezy insider also shared an image of the shoe on its social media account to give fans an idea of what’s expected to release. The Yeezy BSKTL Knit “3D Slate Blue” iteration will don a predominantly black color scheme on the upper that’s coupled with blue stripes woven into the bottom portion of the material. Adding to the look are black shoelaces,...
APPAREL・11 DAYS AGO
Sunderland Echo

This article contains affiliate links. We may earn a small commission on items purchased through this article, but that does not affect our editorial judgement. There are many things to think about when choosing a winter boot. Firstly, you have to consider when you will wear your boots. If you’re...
APPAREL・11 DAYS AGO