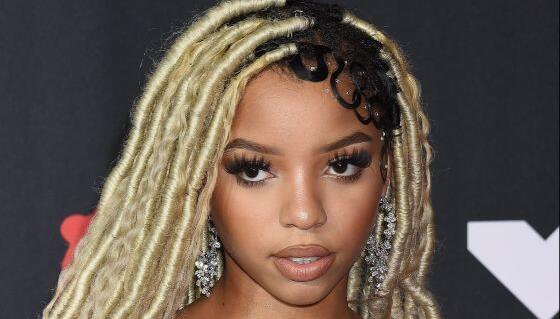 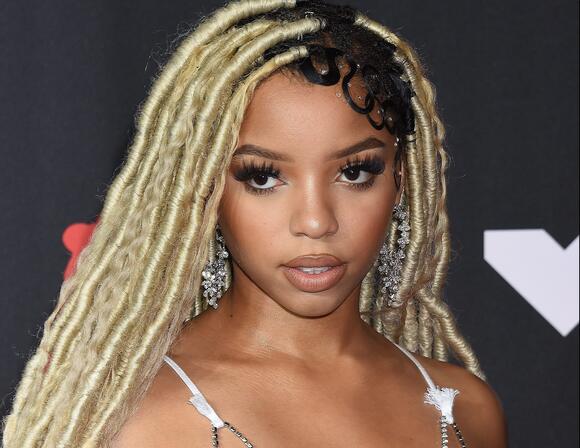 Chlöe Bailey made her solo performance debut at last night’s VMAs and left fans shaking while sparking those pesky Beyoncé comparisons on Twitter. After giving her audience goosebumps with live singing with insanely sexy choreography, fan conspiracies FLEW alleging that Bey’s been grooming the songstress o “replace her” as the next iconic performing artist.

Fans of Beyoncé seemingly think the 40-year-old mother of three is ready to retire and she knew to make Chlöe a well-rounded star before clocking out on her career according to the chatter.

Well, Chloe DID give a stunning vocal and dance performance yesterday evening — but, is it Beyoncé level?

Fans believe it is!

Prior to hitting the stage double cheeked-up in a hot pink bodysuit, Chlöe told MTV News that she’s enjoying embrace her sexuality in the same way that male artists do, but in an “artful way.”

“Men can glorify ass in their videos, I want to do it with this in a really artful, fun, beautiful way. And I think it’s so great how women can claim their ownership of their bodies and not let the world do it. We get to do it in the way that we want to, and it was really fun!”

One stand-out moment from Sunday’s VMAs performance was when Chlöe actually let her tongue roll all over her hot mic. The moment trended online from folks who turned it into memes.

See some reactions from fans saying Bey’s been preparing her “clone” below.

Do YOU think this conspiracy is true?

seriously? U should have started worrying about examples for young girls when the Kartrashians started 20 years ago. Kartrashians have done far more damage the last TWENTY years than this artist will ever do.

Girl.......is this what you really want to be known for?? This was not done in an "artful" way. Anybody could have seen this same performance at their local strip club.

Looks like just a stripper dancing act .... basically wiggling that body showing her butt off ... to make that money 💰 😌

Chlöe Held Nothing — Nothing! — Back in Her Late-Night Debut of "Have Mercy"

Chloe Bailey is giving "Have Mercy" its time to shine. A month after performing her debut solo single live for the first time at the MTV Video Music Awards, the singer, whose stage name is simply Chlöe, offered another dramatic performance on The Tonight Show on Oct. 12. Wearing an...
CELEBRITIES・11 DAYS AGO
Billboard

Kelly Rowland Reacts to Viral Video of Her Run-In With Jay-Z: 'I See My Big Bro All The Time!'

Last Wednesday, the two were both at the Los Angeles premiere of Netflix's "The Harder They Fall," and a short clip of the two seeing one another made waves on the Internet and had fans smiling ear to ear, mainly due to Jay's pure reaction of shock and joy at seeing Rowland.
LOS ANGELES, CA・4 DAYS AGO
Page Six

Jay-Z and Beyonce’s adorable daughter stole the spotlight while appearing in the power couple’s new ad for Tiffany & Co. In the clip, titled “Date Night,” Blue, 9, can be seen running behind a car as her parents cruise through Manhattan while dressed to the nines. Towards the middle of...
CELEBRITIES・5 DAYS AGO
Essence

It's the Queen's world, we're just living in it. “World STOP!” – those are the exact words playing in our mind any time Beyoncé posts on Instagram. While most celebrities have joined the general population online in sharing their day-to-day lives giving fans an intimate glimpse, Queen Bey remains the quintessential celebrity with her very curated content featuring her latest released work and outfits of the day. And although we may not get to see what a day in the life of Beyoncé is really like (for good reason), the content is still gag-worthy and her outfits are too — leaving us to believe she really wakes up like this.
BEAUTY & FASHION・6 DAYS AGO

After Chlöe Bailey’s performance of “Have Mercy” on The Tonight Show Starring Jimmy Fallon earlier this week, online users are once again voicing their strong opinions on whether or not the 23-year-old songstress needs to stop “doing too much.”. During the performance of her solo debut single on Oct. 12,...
MUSIC・11 DAYS AGO
POPSUGAR

Chloe Bailey's Sexy Jumpsuit Has Us Asking: Who Needs Red Carpets When We Have Courtside Hangs?

Is courtside the new red carpet? First, it was Adele's head-toe-toe leather outfit at the NBA season opener earlier this week. Now, it's Chloe Bailey's sexy jumpsuit at the Hawks game Thursday evening. The "Have Mercy" singer made an appearance at the game alongside rapper Gunna, causing fans to wonder whether a collaboration — or romance — is in the works. Either way, all eyes had to be on Chloe and her incredible outfit.
CELEBRITIES・2 DAYS AGO
HipHopDX.com

New York, N.Y. – Chloe Bailey checked another box in her ascension as she made her solo debut (sans Halle) on The Tonight Show Starring Jimmy Fallon on Tuesday evening (October 12). The 23-year-old’s grandiose stage presence was on display as she took the stage in a glamorous white ballroom...
BEAUTY & FASHION・11 DAYS AGO
rolling out

Since launching her solo career and dropping her single “Have Mercy,” Chlöe has consistently been a trending topic. She stopped by The Breakfast Club on Friday, Oct. 15, and dished on how she feels about people comparing her to her mentor and advisor, Beyoncé, and the criticism she has received on her performances.
CELEBRITIES・8 DAYS AGO

Chlöe Takes Over "The Tonight Show" With "Have Mercy" Performance

She kept things tame this time around, and Chlöe's most recent performance was a far cry from her MTV Video Music Awards display. One half of the Chloe x Halle singing sister duo has embarked on her solo career and its first phase has proven to be successful. Chlöe Bailey's "Have Mercy" has been teased online for some time as a clip of the track became a viral TikTok hit, so when it finally arrived, fans ate it up.
CELEBRITIES・11 DAYS AGO
PopSugar

Did it hurt when Chloe Bailey fell from heaven? We're seriously wondering after watching her performance at the The Tonight Show Starring Jimmy Fallon. The artist looked absolutely angelic when she arrived in a stunning white feathered gown that flowed into a dramatic train. This isn't the first of her jaw-dropping style moments; we're still thinking about the hot-pink Area blazer she wore for the "Have Mercy" video. Wherever Chloe goes, the fashion follows, whether she's on stage at Global Citizen Live with her sister Halle or walking the streets of Paris.
BEAUTY & FASHION・11 DAYS AGO
Complex

Here’s Chlöe’s Reaction to People Comparing Her to Beyoncé

Chlöe Bailey often draws comparisons with her mentor Beyoncé, and was even dubbed “baby Beyoncé” after sharing her debut single “Have Mercy.”. Chlöe said she’s “grateful” that fans think she’s reminiscent of Bey, telling the Breakfast Club, “I love her so much and we talk about any and everything. I’m just so grateful to have her stamp of approval and she always gives me words of encouragement—you have no idea how much that means to me.”
CELEBRITIES・9 DAYS AGO
Teen Vogue

October 12 was a busy day for Chlöe Bailey. Not only did she attend Teen Vogue's 18th birthday party, she also performed her solo song “Have Mercy” on The Tonight Show Starring Jimmy Fallon. And what a performance it was. Chlöe made sure to impress the audience with her powerhouse vocals and also dazzle the crowd with her outfit — or shall we say outfits.
APPAREL・10 DAYS AGO

Before she was solo superstar Beyonce, queen Bey was a member of Destiny’s child. It makes sense that she would offer advice to artist Chlöe Bailey as she leaves duo Chlöe x Halle and embarks on a solo career. Chlöe Bailey went on Tamron Hall to share the challenges of embarking on a solo career as well as valuable advice offered by Beyonce, who she considers one of her idols.
MUSIC・4 DAYS AGO
audacy.com

Gunna and Chlöe Bailey step out together after some IG flirting

So, remember when Gunna tried to shoot his shot with Chlöe Bailey after that MTV VMAs mic-licking debut performance of "Have Mercy." Well, looks like it actually worked, as the two were spotted together during the Hawks vs. Mavericks game in Atlanta on Thursday night. And though the two were photographed sitting court-side with a small table in-between them, many fans believe they arrived together and were on a date.
CELEBRITIES・2 DAYS AGO
HelloBeautiful

Megan, kindly remove your foot from our necks.
APPAREL・19 DAYS AGO
Complex

Back at the 2009 MTV VMAs, Lil Mama made quite the splash when she spontaneously joined Alicia Keys and Jay-Z onstage while they played their hit “Empire State of Mind.” As Hov and Keys were performing Lil Mama danced up the stairs, got close to them, and stayed for the duration, even joining in on Keys and Jay’s clearly rehearased song-ending pose.
MUSIC・3 DAYS AGO
Bossip

We’re super excited to share the latest trailer for “KING RICHARD” starring Will Smith and Aunjanue Ellis. The film tells the story of Venus and Serena Williams’ father Richard as he set out to help mold their future as champions in the sport of tennis. You might have noticed that...
TENNIS・3 DAYS AGO
Bossip

In a crossover none of us saw coming, Cardi B and Penn Badgley are one another's biggest fans.
CELEBRITIES・3 DAYS AGO