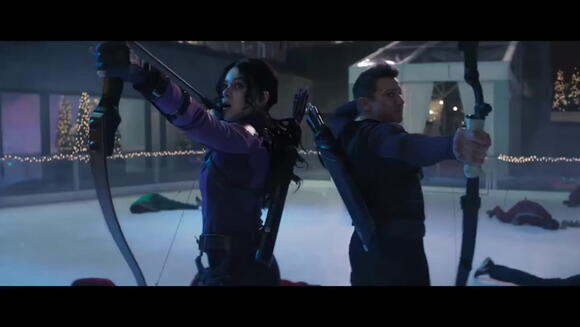 In the clip, unveiled on Monday (13 September) by Disney+, Clint Barton, aka Hawkeye, tries to enjoy life with his family – until of course his existence as a superhero catches up with him.

This includes taking his children to see a musical in New York City as the holiday season approaches.

The musical in question, as it turns out, is none other than the fictional – and very meta – Rogers: The Musical , a Broadway retelling of Captain America’s story.

According to signage on display outside the theatre in the trailer, Rogers: The Musical “captures the heart of a hero”. The trailer even includes flashes of excerpts from the rave reviews supposedly received by Rogers: the Musical , which deem it “ a super-powered sensation” and “a timeless story of a timeless hero”.

A later frame shows the musical version of Steve Rogers dancing onstage with his trademark shield, accompanied by doppelgängers of other well-known Marvel characters such as Thor and his brother Loki. 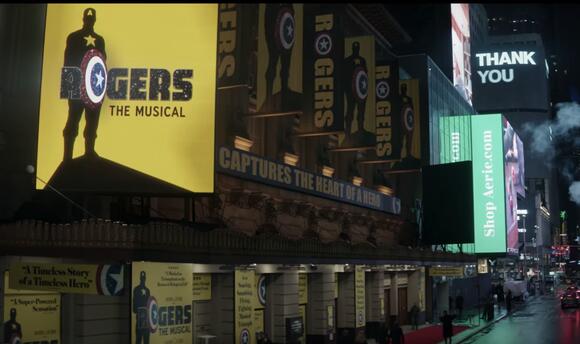 Fans were quick to pick up on the moment. Some loved it so much they said they needed a real-life version of the Broadway show.

Hawkeye stars Jeremy Renner as the titular character and Hailee Steinfeld as his protégée Kate Bishop.

Florence Pugh will also star as Yelena Belova, having made her Marvel debut in Black Widow , but her character does not appear in the trailer.

Hawkeye will start streaming on 24 November on Disney+ in the US and in the UK.

Netflix users rewatching Squid Game have noticed a huge episode one clue teasing the show’s ending.The Korean series has become one of the streaming service’s most successful shows, with 111m households tuning in since it was released on 17 September.This makes it Netflix’s most-watched series launch ever, beating period drama Bridgerton, which was watched by 82m households in its first 28 days.Those who have finished Squid Game are now going back for round two – and are noticing new details now they know how it ends.In fact, the big twist becomes quite obvious knowing what’s coming.*Major spoilers follow – you...
TV SERIES・9 DAYS AGO
punchdrunkcritics.com

Trick arrows, Santa Claus, and a Captain America Broadway musical…maybe one of those things seems like it should be in the upcoming Hawkeye series on Disney+. Promised to be “the six-part holiday event you can’t miss”, the show returns Jeremy Renner as the Avengers’ resident archer, joined by Hailee Steinfeld as his protegee, Kate Bishop, destined to become the new Hawkeye.
TV & VIDEOS・10 DAYS AGO
IGN

Vodka martini. Shaken, not stirred. No Time to Die is here, and the 25th James Bond film is the last for Bond actor Daniel Craig. But how does he die and how will the Bond franchise continue on without him? We will break all of that down plus we break down that James Bond No Time to Die ending and what it means for the future of the 007 franchise. So if you need No Time to Die explained, join IGN host Clint Gage for some 007 Canon Fodder for the full No Time to Die breakdown and all of the Easter Eggs we could find. Ever since the first No Time to Die trailer, 007 fans have wondered how Rami Malek's character connects to the rest of the story, and we definitely have the answer for that in this video.We also break down the appearance of Christoph Waltz as Spectre boss Blofeld. We do not, however, have the Billie Eilish No Time to Die or the No Time to Die lyrics in this video because Canon Fodder is more about that No Time to Die movie more than the song. While fans hoped the James Bond movie would introduce something new, rockstars like James Bond are always on hand in case of emergency. Awesome characters like Felix Leiter and Moneypenny are also in this movie so join us for No Time to Die explained.
MOVIES・11 DAYS AGO
The Independent

The first trailer for the latest chapter in the Scream franchise has been unveiled, with fans already spotting potential Easter eggs hinting at the film’s plot.Scream, the fifth entry in the long-running series, sees Neve Campbell, Courteney Cox and David Arquette return to their roles of Sidney Prescott, Gale Weathers and Dewey Riley, respectively.The new trailer keeps its cards close to its chest, but suggests that Sidney – now the survivor of four separate murder sprees – is wooed back to the sleepy town of Woodsboro amid a new spate of killings. At one point, a character played by...
MOVIES・12 DAYS AGO

It's the most wonderful time of the year... almost! Next month will see the long-awaited premiere of Hawkeye, the six-part limited series that will see the return of Jeremy Renner as Clint Barton and feature the debut of Hailee Steinfeld as Kate Bishop. The first trailer for the series was released last month, and a new one just dropped today, revealing that the first two episodes will premiere on the same day.
TV SERIES・10 DAYS AGO
Collider

The upcoming reimagining of the beloved 1990 film Home Alone titled Home Sweet Home Alone has got an official trailer and its first images. Directed by Dan Mazer, the film also tells the story of a family that, in the chaos of getting everything packed and ready to go on holiday, ends up leaving their son behind at home. Home Sweet Home Alone will be premiering exclusively on Disney+ on Friday, November 12.
MOVIES・12 DAYS AGO
asapland.com

Star Wars: The New Trilogy Might Have Gorgeous “Gal Gadot”

Star Wars: The New Trilogy Might Have Gorgeous “Gal Gadot” It is said that in Lucasfilm, they are very interested in recruiting the actress who plays Wonder Woman. Although Star Wars: The Rise of Skywalker will arrive at closing the Skywalker saga. The franchise will go for a long time since Disney and Lucasfilm have big plans.
MOVIES・18 DAYS AGO
ComicBook

With the premiere of Chucky tonight on USA, series star Devon Sawa took to social media tonight to share a little behind-the-scenes Easter egg that might have been. In a promotional image, Chucky can be seen wearing a Hello Kitty mask. Sawa, who starred alongside Bill Pullman and Christina Ricci in the 1995 Casper movie, shared with fans on Twitter today that there could have been a Casper mask there instead. Unfortunately for those who would be excited for such a wink-and-a-nod reference, NBCUniversal apparently couldn't or wouldn't clear the rights for Casper.
MOVIES・12 DAYS AGO

‘Hawkeye’ To Premiere on Disney+ With 2 Episodes, New Trailer

This show actually seems like it's going to have more comedy than Marvel's previous series. We're not mad at that.
TV SERIES・9 DAYS AGO
Winter is Coming

Is Eternals on Disney+? Where to watch the Marvel movie

Marvels Studios has released several major movies this year. Up next is Chloé Zhao’s Eternals, which is set to be a game-changer. Never before have we seen so many new heroes on screen in the MCU. The film boasts an absolutely star-studded cast. There’s Angelina Jolie as Thena, Game of Thrones alums Richard Madden as Ikaris and Kit Harington as Dane Whitman, Salma Hayek as Ajak, Kumail Nanjani as Kingo, and many more.
MOVIES・2 DAYS AGO
imdb.com

The Morning Watch: The Batman Trailer Easter Eggs, The Expanse Heads To The Smithsonian & More

(The Morning Watch is a recurring feature that highlights a handful of noteworthy videos from around the web. They could be video essays, fan-made productions, featurettes, short films, hilarious sketches, or just anything that has to do with our favorite movies and TV shows.) In this edition, dig into nearly...
TV SHOWS・6 DAYS AGO
Newsweek

'Scream 5' trailer: All the Cameos and Easter Eggs You (Probably) Missed

Sidney Prescott (played by Neve Campbell) is back to fight Ghostface once again, with some new and very familiar faces by her side.
MOVIES・11 DAYS AGO

That slippery symbiote is back on your screens, as Venom: Let There Be Carnage has wrapped its tendrils around the box office. With Andy Serkis replacing Ruben Fleischer as director, the sequel to 2018’s Venom picks up following the dramatic tease of Woody Harrelson’s Cletus Kasady, aka Carnage. As the...
MOVIES・4 DAYS AGO