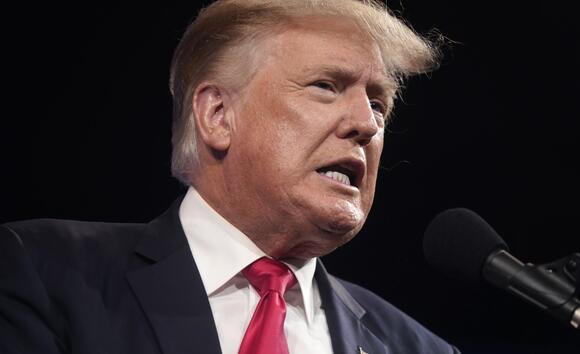 In response to Biden's executive order demanding employers with more than 100 workers require COVID-19 vaccinations or be subject to weekly testing, Trump told Fox News that the vaccine "shouldn't be necessary," echoing the sentiment maintained by other Republican leaders who believe inoculation against the illness should be optional.

Trump has touted his administration's distribution of an effective COVID-19 vaccine through Operation Warp Speed, a public-private partnership that helped push out a vaccine in less than a year following the outset of the respiratory virus.

"If you remember, when I was president, there were literally lines of people wanting to take it," Trump said, referencing vaccine hesitancy among segments of the population. "Now, you have a different situation, and it’s very bad."

'WE WILL GET THROUGH THIS IN FREEDOM': PENCE SLAMS BIDEN'S FEDERAL VACCINE MANDATE

Both Trump and former Vice President Mike Pence have criticized Vice President Kamala Harris for her remarks last year when she said , "I would not trust Donald Trump" and "I will not take his word for it" over promises of an effective vaccine.

"They disparaged the vaccine, and now, they wonder why people aren’t wanting to take it?" Trump said. "It’s a disgrace."

Biden's decision on Thursday was met with fiery condemnation by Republican leaders, including Georgia Gov. Brian Kemp and Arizona Gov. Doug Ducey, the latter claiming that the president's "dictatorial approach is wrong, un-American, and will do far more harm than good."

Pence sharply criticized Biden's mandate on Friday, taking aim at the president's remark that his "patience is wearing thin" with the unvaccinated population.

At least 54% of the population has been fully vaccinated against COVID-19, according to Johns Hopkins University.

"That’s not how the American people expect to be spoken to by our elected leaders," Pence said.

as a general sratement, most vax hesitant dont trust biden.. not mutually exclusive. but doesn't mean they trust trump either.. in general they distrust the government no matter who is in charge.

Why is he still talking I wish he would just go away like every other president has in the past he is irrelevant.

Trump's not letting us know how covid really was for him & secrecy of his alleged vaccine caused more doubt & reluctance since it was in the beginning of this horrific pandemic.

Watergate sleuth Carl Bernstein says supporters of former President Donald Trump need to be investigated as part of a broader examination beyond the Capitol riot. During a recent interview on CNN, Bernstein warned there is "a kind of civil war in this country ignited by Donald Trump," who may yet run again for the White House in 2024, and he argued a "coup attempt" took place on Jan. 6 that was propped up on lies about a stolen election in 2020 that a large number of Republicans continue to believe in.
POTUS・16 HOURS AGO
Newsweek

"Not only the deposition of the president himself, but records related to him. Whether those be cellphone, Twitter accounts, communications with individuals," said Democratic Rep. Stacey Plaskett.
POTUS・13 HOURS AGO
Newsweek

The former president has now lost the popular vote in two consecutive elections and could struggle to win in 2024.
PRESIDENTIAL ELECTION・18 HOURS AGO

Nearly Quarter of Republicans Still Think Trump 'Likely' to Be Reinstated in 2021: Poll

Even though the U.S. Constitution doesn't provide a mechanism for the "reinstatement" of a president, 22 percent of Republican voters still think Trump's likely to be reinstated before the year ends.
PRESIDENTIAL ELECTION・11 HOURS AGO
The Independent

Donald Trump has become the favourite to win the election in 2024, as Joe Biden falls behind the former US president and faces challenges with his domestic agenda. Mr Trump, according to betting odds, had been ahead in the race for the Republican nomination in 2024 but had not been on odds for a win in the election.However, recent odds byBetfair Exchange found Mr Trump is now 4.8 to win in 2024. Mr Biden, meanwhile, was at 5.1 after falling behind his own vice president, Kamala Harris, in the presidential tie-up. Although neither Mr Trump nor Mr Biden have...
PRESIDENTIAL ELECTION・1 DAY AGO
Business Insider

The Renew America Movement is urging moderate Republicans to support Democrats as part of a bid to defeat the pro-Trump GOP.
U.S. POLITICS・1 DAY AGO
WEKU

If the Republicans take the House back in the 2022 midterm elections, they get to pick a speaker, and there's no requirement that the speaker has to be an elected representative. "Can you just imagine Nancy Pelosi having to hand that gavel to Donald J. Trump?" mused Rep. Matt Gaetz,...
POTUS・22 HOURS AGO

Terry McAuliffe is under fire for an alleged gaffe. He’s got plenty of company.
PUBLIC HEALTH・16 HOURS AGO
Fox News

President Biden roundly criticized then-President Donald Trump during a rush on toiletries and other goods in the early days of the coronavirus pandemic, but now that exponential inflation and a supply chain crisis has set in, the Delaware Democrat fails to be circumspect in that regard, the panel on "The Five" discussed Friday.
POTUS・1 DAY AGO
CNBC

“I like kids better than people,” President Biden said Friday after getting a hug from a toddler in Connecticut while nearby protesters bellowed, “F–k Joe Biden.”. “When I talked to all your folks out on the playground, I joked that everybody knows I like kids better than people. Fortunately they like me. That’s why maybe I like them,” Biden said during a speech in Hartford.
PRESIDENTIAL ELECTION・1 DAY AGO
Newsweek

The California congressman has called the former president a "clear and present danger" to democracy.
POTUS・1 DAY AGO
WJW FOX 8 News Cleveland

Republicans for Voting Rights, an organization operating under the Defending Democracy Together, has launched a quarter-million-dollar campaign to erect dozens of these billboards in major markets across the country.
PRESIDENTIAL ELECTION・2 DAYS AGO
The Associated Press

HARRISBURG, Pa. (AP) — An endorsement by former President Donald Trump in Pennsylvania’s hotly contested U.S. Senate race isn’t backing down rival Republicans, with one putting up millions for her campaign and another getting a seven-figure pledge from a donor. Carla Sands, Trump’s ambassador to Denmark, loaned her campaign $3...
PRESIDENTIAL ELECTION・1 DAY AGO

The Republican Party doesn't have a platform. Or a policy agenda. Or substantive issues it's eager to work on. Or compelling leaders who are ready to govern. What defines the contemporary GOP — the one thing that animates the party more than anything else — is an unshakable belief in a ridiculous lie about Donald Trump's 2020 defeat. The former president boasted at an Iowa rally this past weekend, "It's the single biggest issue, the issue that gets the most pull, the most respect, the biggest cheers is talking about the election fraud of the 2020 presidential election."
POTUS・2 DAYS AGO
POLITICO

The president has made claims of fraud the centerpiece of his post-presidency. It would be a legislative feature of a second term too.
PRESIDENTIAL ELECTION・1 DAY AGO
NBC News

Trump's stolen election lie is on the ballot in 2022, thanks to these candidates

The future of U.S. elections is on the ballot in 2022, largely because former President Donald Trump can’t let go of the past. “The single biggest issue — the issue that gets the most pull, the most respect, the biggest cheers — is talking about the election fraud of 2020’s presidential election,” Trump said last week at a rally in Iowa, again pushing the lie that a second term was stolen from him and that Joe Biden is not the legitimate president.
PRESIDENTIAL ELECTION・1 DAY AGO