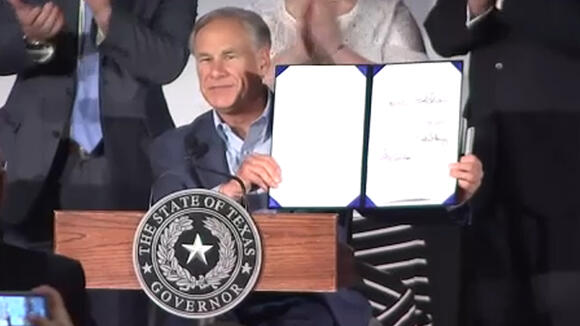 Gov. Greg Abbott was in Houston Monday morning to sign Texas' new bail law intended to "fix the broken bail system and keep dangerous criminals behind bars," according to the governor. SEE RELATED STORY: Bail reform listed as special legislative session priority by Texas Gov. Greg Abbott Senate Bill 6, also called the Damon Allen Act, eliminates PR bonds for violent offenses. That's when a suspect does not have to put up any cash to get out of jail. The law is named after a state trooper who was killed on Thanksgiving in 2017 during a traffic stop. The gunman, Dabrett Black, who had a history of violence against law enforcement, was out on bond for other crimes. MORE: Who is the suspect in Texas DPS trooper's murder? "The magistrate who was considering bail for the person who killed Damon Allen did not have access to the criminal history that could have kept him behind bars," said Abbott during a briefing Monday. Currently, the ability of a defendant to post cash determines most Texas jail releases, but some jurisdictions - particularly in Harris County after losses in federal court - have recently shifted to releasing more people accused of low-level crimes without requiring money. In the new bill, judges must also take a suspect's criminal past into consideration before setting bail. Abbott and other Republicans, along with crime victims and their supporters, have pushed for the bail legislation, saying it is needed to keep dangerous people behind bars before their trials. They have pointed to rising crime rates and numerous examples of defendants accused of violent crimes being released on bond and then accused of new crimes. The new bill was an emergency item that Abbott said he set during the regular legislative session. He said that because the Democrats broke quorum during the session, the bail reform bill did not get across the finish line. WATCH: Why people are getting out on so many bonds

It's become too familiar. People are out on several bonds and continue racking up charges, leaving more potential victims in their path. ABC13 took a look into how it's happening.

Kacey Allen, Damon's widow, was also present at the briefing. "The murderer still went to jail, and my life and my kids' lives were forever changed by actions that can't be taken back," she said. "It's been an honor to help work on this bill." She said she hopes this new legislation shows that the state supports officers. "Many people in the world see law enforcement not as people who are trying to help but as the enemy," she added. For updates on this story, follow Nick Natario on Facebook , Twitter and Instagram .

Good news! Keep criminals in jail and off the streets, where they will only commit more crimes. Letting them out (like weed smoking Kamala Harris did) will only perpetuate the current crime spree in this country.

Like the 3 guys who followed a couple into their gated community, robbed and murdered them? They were caught and one of the guys could afford to pay the $35,000 to get out..."He's expected to be in Court in October"...Do you really believe that this guy, who is Definitely facing MANY years, if not LIFE in Prison - is Voluntarily going to "show up in Court"? I Don't. I think he's Already in Mexico or somewhere hiding out - Probably committing More Crimes - Unless, he's being bankrolled by his family ...This is a Good Law! Thank You, Governor Abbott!

Mr Abbott here's a bill you should work on. people who drive without auto insurance who get stopped for whatever reason should have their car or truck (whatever they drive) taken away from them. Also have them pay a fine.

Texas governments have spent the summer preparing their budgets for 2023, wrestling with inflation and a law that prohibits them from raising property tax revenues beyond 3.5% without voter approval.
TEXAS STATE・2 HOURS AGO
ABC13 Houston

Although leaders considered July's buyback a success with more than $100,000 exchanged for guns, it's believed many people 3D printed or made guns specifically for the program.
HOUSTON, TX・12 HOURS AGO
ABC13 Houston

Texas Rep. Dade Phelan says he would vote against increasing minimum age to 21 to buy firearm

Families of the Uvalde shooting victims have called for a special session to raise the minimum age to buy a firearm from 18 to 21. Texas Rep. Dade Phelan says he would vote against it.
TEXAS STATE・20 HOURS AGO
ABC13 Houston

One of the longest-serving Republican state senators, Robert Nichols, is among the first to say publicly he'd support revising the state's abortion prohibition.
TEXAS STATE・1 DAY AGO

In an affidavit, a process server said that the state's top attorney tried to evade him as he attempted to deliver a subpoena from an abortion fund's lawsuit against the state.
TEXAS STATE・4 HOURS AGO
ABC13 Houston

'These situations can turn violent': 35% of homicides related to domestic violence, HCSO says

Sheriff Ed Gonzalez spoke to reporters outside of a homicide scene after a woman was shot to death with her baby in her hands.
HARRIS COUNTY, TX・23 HOURS AGO
ABC13 Houston

'We will never have closure': Hundreds of homicide victims honored on National Day of Remembrance

So far, 322 people have been murdered in 2022, according to authorities. The Crime Stoppers director said victims' names are usually read aloud at the event, but this year there were too many.
HOUSTON, TX・1 DAY AGO
ABC13 Houston

13 Investigates: Shootings less likely to be solved when victim survives

13 Investigates found thousands of people are shot at every year in Houston, but only about 30% of those shootings end up getting solved.
HOUSTON, TX・12 HOURS AGO

Monday night on ABC13, hear from Houston police on how thousands of shootings every year across the city are solved.
HOUSTON, TX・13 HOURS AGO
ABC13 Houston

A new survey from the University of Houston and Texas Southern University shows broad support for gun safety reforms, including from GOP voters.
TEXAS STATE・4 DAYS AGO
ABC13 Houston

The credit is one-time only, and you'll need to apply for it.
TEXAS STATE・3 HOURS AGO

'This Week in Texas': A discussion on teacher pay and retention with the TEA Commissioner

Join ABC13 political reporter Tom Abrahams as he discusses teacher recruitment and takes a look into student performance with a panel of political insiders on a new episode.
TEXAS STATE・4 DAYS AGO
ABC13 Houston

Some of the more than 100 cases had guns in them. Only ABC13 was there when feds executed warrants on the buyers' storage unit.
HOUSTON, TX・2 HOURS AGO
ABC13 Houston

Ahead of this weekend's convention in Houston, the party said it has a presence in 37 states and 20,000 volunteers.
HOUSTON, TX・4 DAYS AGO

New numbers show how many Houstonians are struggling to keep the lights on, and for those who are, there are millions of dollars in assistance that's available.
HOUSTON, TX・14 HOURS AGO
ABC13 Houston

Latest Astroworld Festival lawsuit claims disaster was 'months, if not years, in the making'

The latest lawsuit against Travis Scott and festival organizers states those involved disregarded the extreme risks of harm to concertgoers, which had been escalating hours earlier.
HOUSTON, TX・4 DAYS AGO
ABC13 Houston

Houston's program comes as the White House is focused on a plan to end hunger and diet-related illnesses by 2030.
HOUSTON, TX・2 HOURS AGO
ABC13 Houston

Early reports show the bus driver was not at fault, and the 28 students onboard did not sustain major injuries, according to investigators.
WALLER COUNTY, TX・18 HOURS AGO